For this week’s nonscientific survey of insiders in government and politics, we asked about changing the conversation in the race for the White House.

A couple of important developments have cropped up in the last couple of weeks. The terrorist attack in Brussels focused attention in the race (for a brief while, at least) on foreign affairs. But then the tenor of the conversation on the Republican side dropped to a new low with the use of social media to launch personal attacks on the wives of Donald Trump and Ted Cruz.

This week's questions focus on potential shifts in the conversation when it comes to the presidential race and what those shifts might mean for the candidates.

We began by asking who benefits most should voters place more emphasis on who's better on foreign affairs. On this one, nearly three-fifths of the insiders gave the advantage to former Secretary of State Hillary Clinton. Cruz, a U.S. Senator who sits on the Armed Services Committee, was mentioned by nearly a fifth of the insiders while Ohio Gov. John Kasich and businessman Trump trailed further behind.

We followed by asking whether the GOP presidential race would shift away from the current predominance of personal attacks. If that happens, we asked who benefits most.

The insiders were a pessimistic bunch on this one. Nearly three-fourths of the insiders didn't see a shift in tone happening. Of those who did see a move away from personal attacks, Cruz (named by 13 percent) was the one most seen as benefiting. He was followed by Kasich (10 percent) and then Trump (3 percent).

We next asked whether spouses of candidates should be considered off limits. A majority of 55 percent agreed with the statement with about 40 percent disagreeing.

We changed things up with the last question, asking whether it matters if the spouse is a public figure in his or her own right. On this one, 55 percent said yes, the public status of the spouse matters while 44 percent said no. 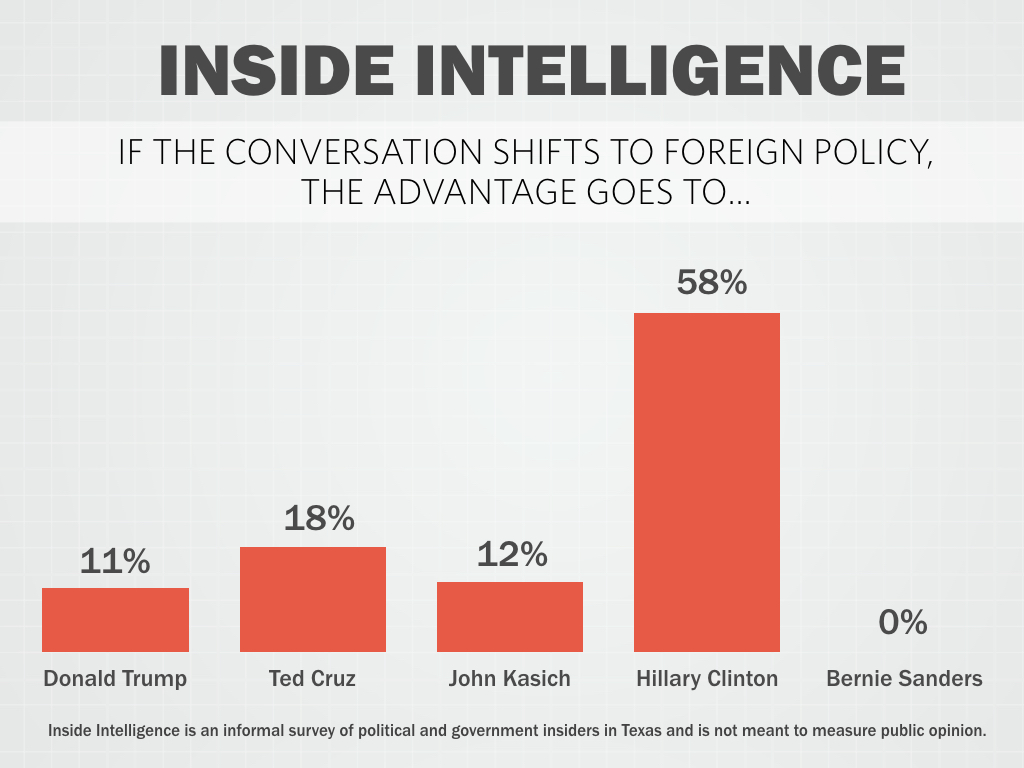 If the conversation shifts to foreign policy, the advantage goes to…

• "Trump has dominated this space in the election. Voters are dissuaded by his lack of experience; in fact, voters are drawn to him."

• "Honestly, Clinton has the most experience dealing with foreign policy going back to her days as first lady, but I still ain't voting for her."

• "Kasich should come out ahead, however Cruz is quite articulate on the issues and comes across more prepared."

• "Hillary Clinton was Secretary of State for heaven's sake. Hands-on experience and extensive contacts. Far from perfection, but at least in the game."

• "Trump is clueless. And ever changing." 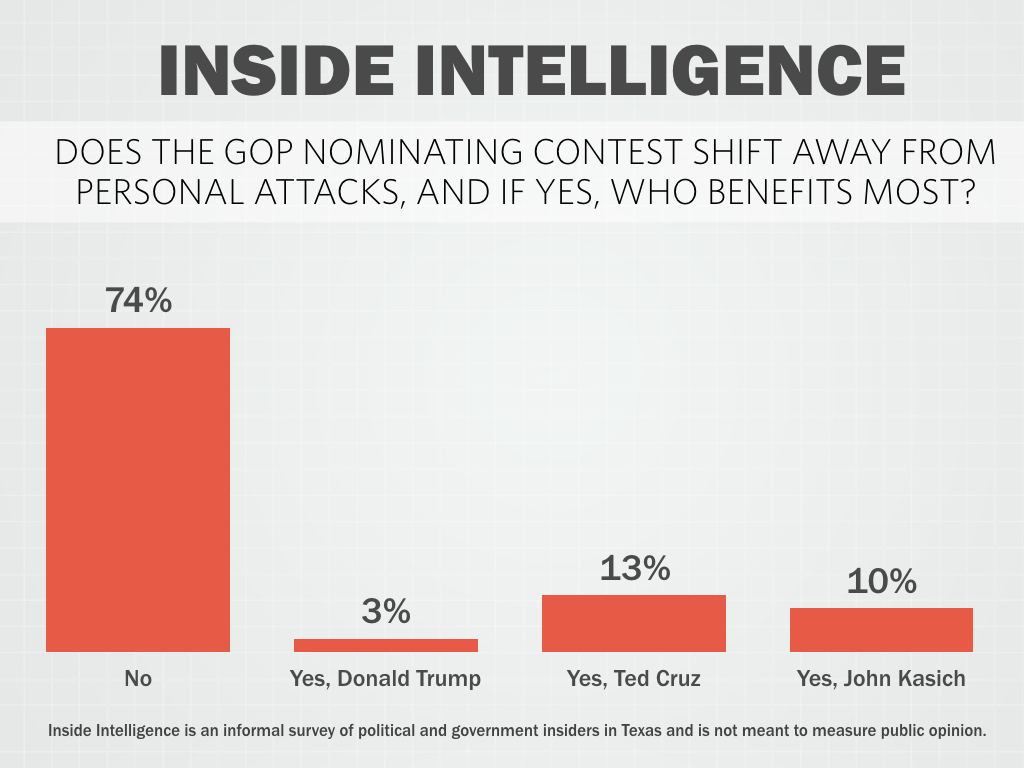 Does the GOP nominating contest shift away from personal attacks, and if yes, who benefits most?

• "IF the WWE cage match closes down, then so does viewership eyelids."

• "Are you kidding? These two school yard wannabe bullies' egos prevent them from shifting away from personal attacks. Believe me, it'll get worse the closer we get to the convention."

• "Regular Republicans are moving to take over the process and stop Trump. Nobody wins if the personal attacks continue."

• "Trump and Cruz are locked in a cage match, and it seems nothing is off limits. Trump is Teflon coated, mostly because the mainstream media doesn't understand the more it attacks Trump the better it is for him. Additionally, the mainstream media doesn't get that it, too, is part of the status quo both populist strains (from the left & from the right) are rebelling against."

• "Of course not. A Trump can't change his spots." 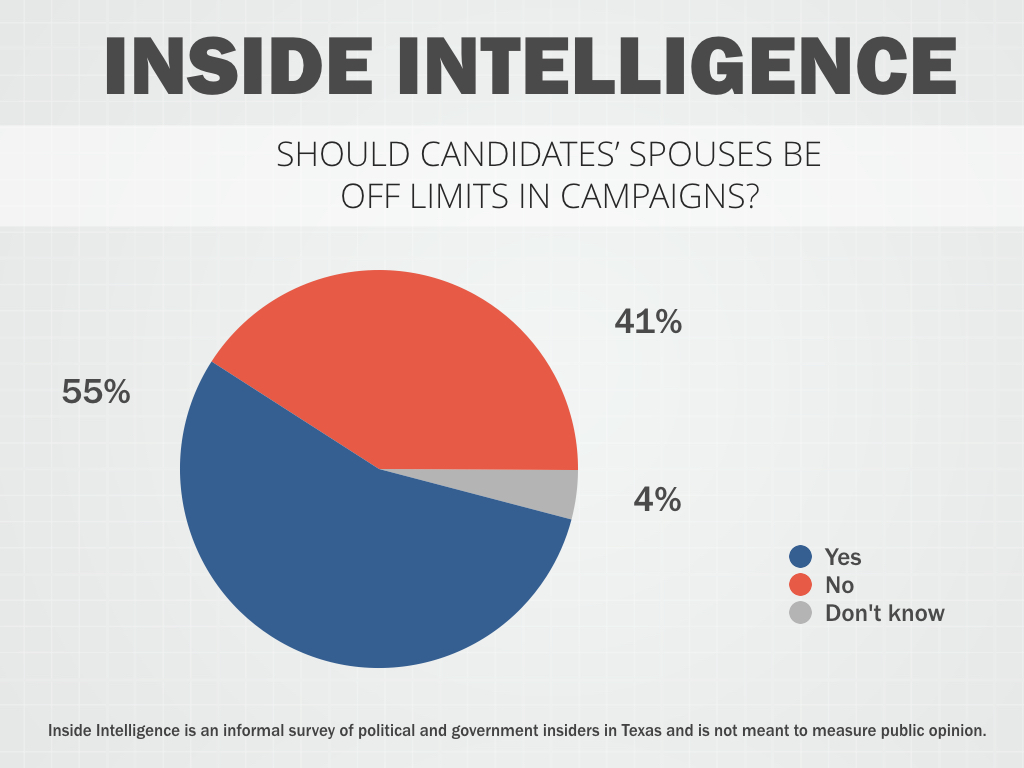 Should candidates’ spouses be off limits in campaigns?

• "They should — but they NEVER will — we want to know every detail about candidates and their entire families. Nothing is off limits these days."

• "But Bill and Hill makes this difficult."

• "The question is not should they be off limits. They most certainly should not be. In addition to having taxpayer provided home, offices, travel, security, etc., in recent history they've taken prominent roles in health care policy, anti-drug campaigns, and school nutrition. The real question is, should candidates have a sense of restraint and decorum to know where a reasonably decent human would draw the line?"

• "You can't use your kids and spouse in political ad and then claim your family is off limits. It's a doggie-doggie world out there and you can't wear Milk-Bone underwear."

• "This is one of those sacred cows, but everyone does the oppo work on spouses and families anyway. It would be more realistic to say that spouses are 'fair game' if they were active in the campaign." 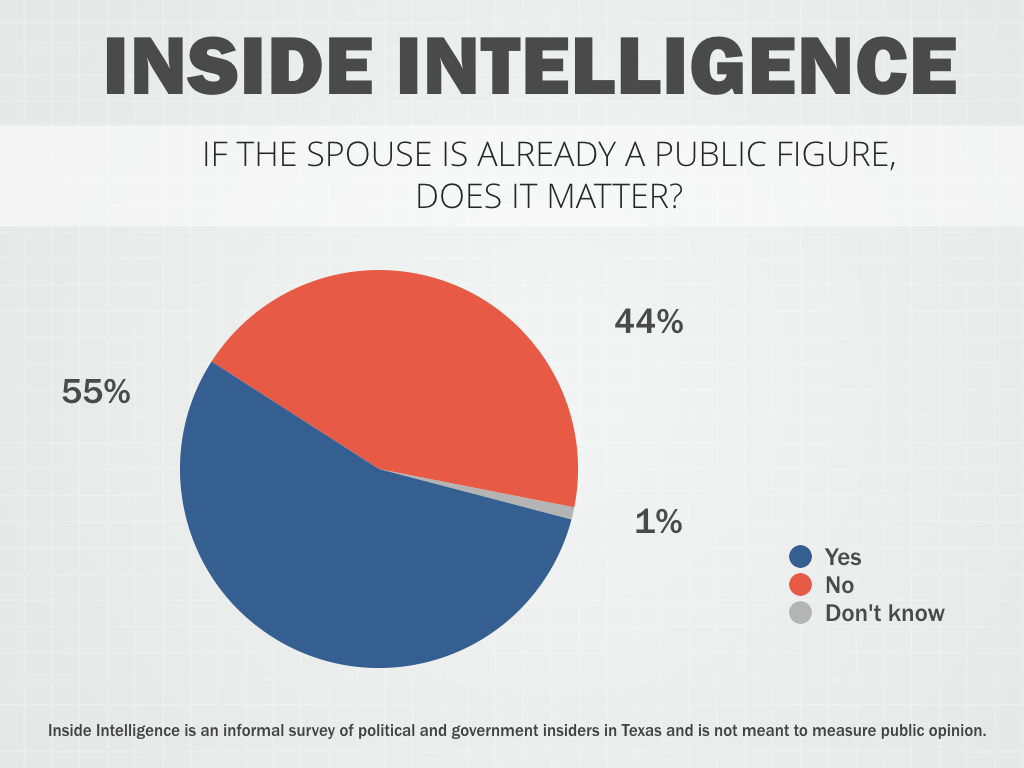 If the spouse is already a public figure, does that matter?

• "If they are public figures with policy initiatives, they are fair game."

• "If you are asking if the spouse is a public figure as in an elected position or a national spokesperson or a Hollywood celebrity then I don't know how one would be able to separate the private life from public life."

• "The spouse is not running for office. Focus on the candidate."

• "There is no way Bill Clinton won't be a huge issue in November — for both sides. And Hillary certainly can't say 'leave my husband out of it' when her campaign will be leveraging Bill in every way they think is helpful."

• "Somewhat because he/she likely will be involved in policy discussions during the campaigns."