For this week’s nonscientific survey of insiders in government and politics, we asked about your convention prognostications.

We started by asking whether Ohio Gov. John Kasich, who by remaining in the presidential race is denying Ted Cruz his one-on-one contest with Donald Trump, will drop out of the race before the national convention this summer.

On this one, more than three in five of the insiders did not think Kasich would get out of the race early. Another 29 percent thought he would step aside before delegates assemble in Cleveland.

We followed up with a two-part question: would there be a contested Republican convention and, if so, who would prevail?

In the event of a contested convention, we then asked if the televised spectacle would end up hurting the GOP nominee in the general election. On this question, a bit more than half said the nominee would be hurt with about a third predicting no lasting damage.

On the final question, we turned toward a pending election at the state GOP convention where party Chairman Tom Mechler is being challenged by former Harris County GOP Chairman Jared Woodfill.

Mechler was favored to win re-election by 38 percent of the insiders while the challenger was favored by 16 percent. Fully 46 percent, though, did not care to make a prediction. 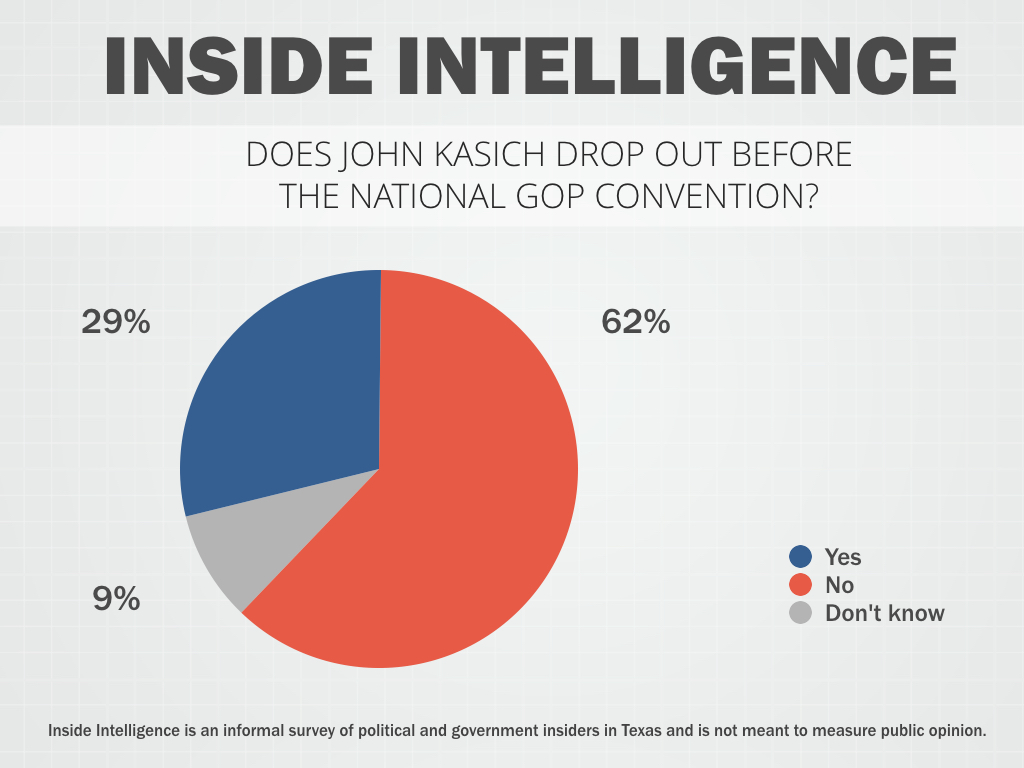 Does John Kasich drop out before the national GOP convention?

• "He doesn't drop out even though he becomes increasingly less relevant, but his presence in the field allows Trump to build a bit more of a margin over Cruz heading into convention."

• "With fewer than a couple dozen states left, why get out?  He'll ride into Cleveland and try to play king maker."

• "Kasich drops out before the convention.  A tree falls in the forest with no one around to hear it.  Pity. Such a good man, and so qualified."

• "No, he is the only remaining 'establishment Republican.' ABC, Anybody But Cruz!" 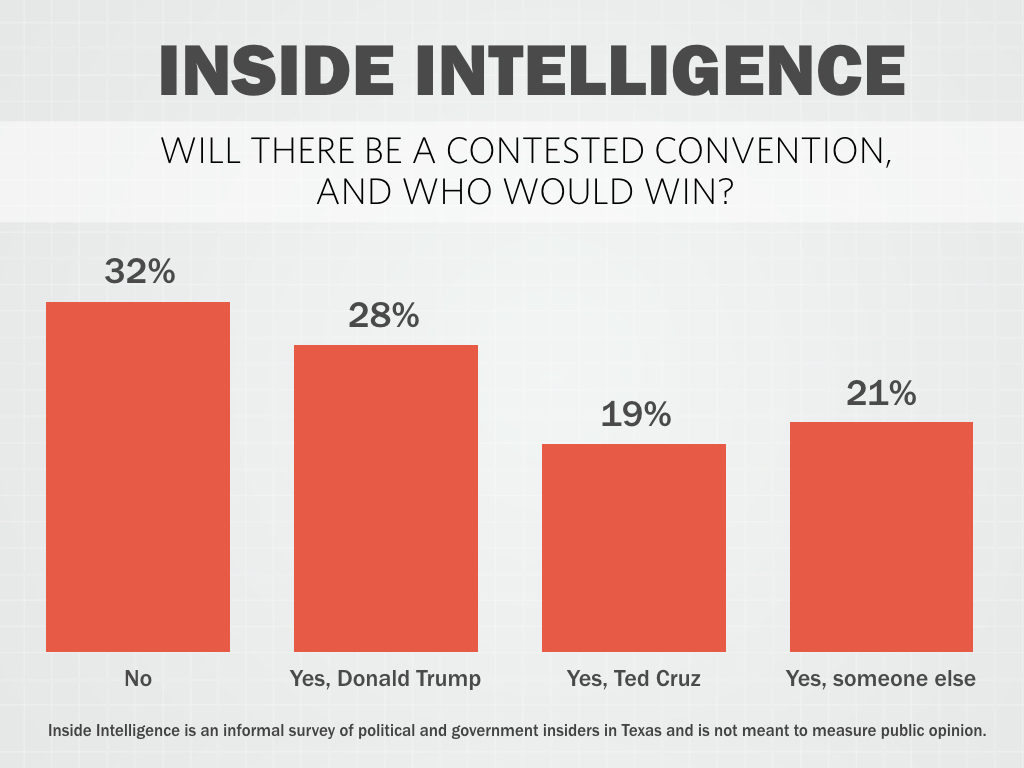 Will there be a contested convention, and who would win?

• "No one will have enough delegates to win the nomination before convention. Anti-Trump factions unite and end up making Ted Cruz (who is just disliked rather than despised) the unlikely nominee."

• "The bombings in Belgium occurring while the President is posing with his comrades in front of a Che mural will serve to make a politically incorrect, unabashed capitalist calling for a stop to immigration seem like the perfect solution to all of this country's woes. Now where can we find one...?”

• "Kasich. If the GOP goes to a contested convention because no one has a majority, the goal will be to pick a presidential candidate that can protect the Republican majorities in the U.S. House and Senate."

• "And Cruz/the Party damn well better pick Fiorina or a Hispanic as the Veep candidate."

• "Trumpmania continues unabated. He gets to his number. The more they try to stop him, the more support he gets. Roughly my 14th choice out of the original 17. Get over it and move on. There's always 2020." 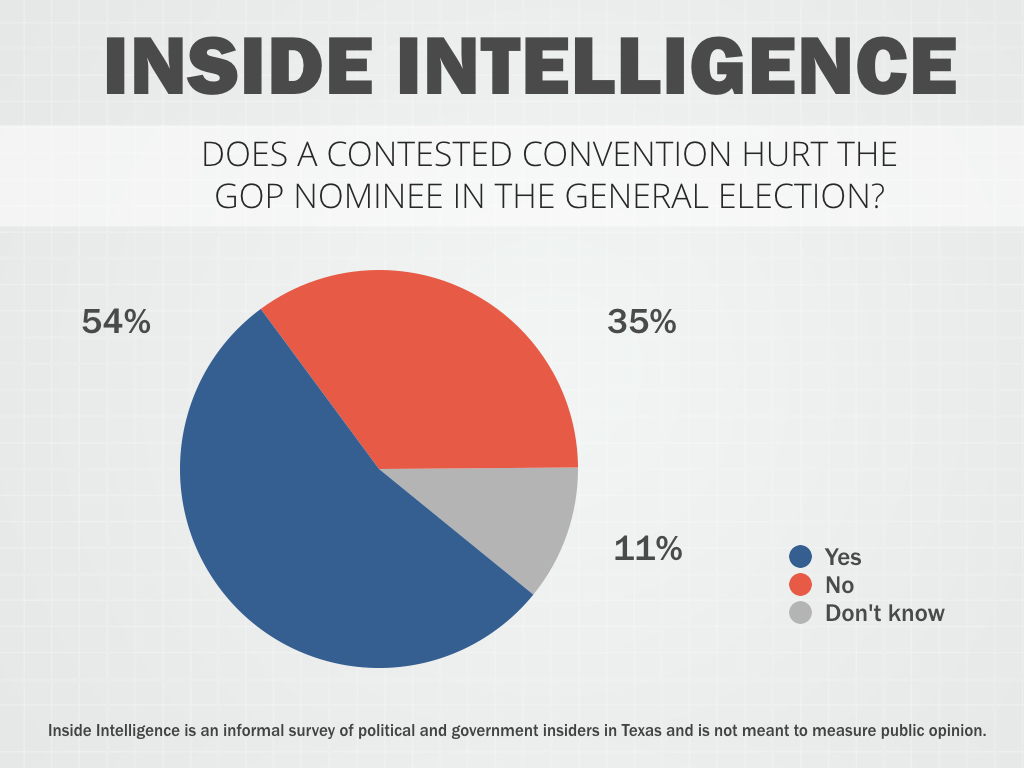 Does a contested convention hurt the GOP nominee in the general election?

• "Depends, the GOP could lose either way. Trump is not electable for President and neither is Cruz for that matter. But, the Trump folks will sit on their rear end if he isn't nominated."

• "If the convention respects the will of the voters, I think we will emerge even stronger. If they go a different route, it will have long-term negative implications."

• "A contested convention pushes viewership to historic levels. How the party (and eventual nominee) choose to use that large public stage will make all the difference in the world."

• "The general public doesn't understand the electoral college or delegates as is. This will only confirm their suspicions that their votes don't count, that the system is rigged."

• "Not sure how much more 'hurt' the GOP can deal with in an already long-shot general. Contested convention would add to the circus. Circular firing squad on meth." 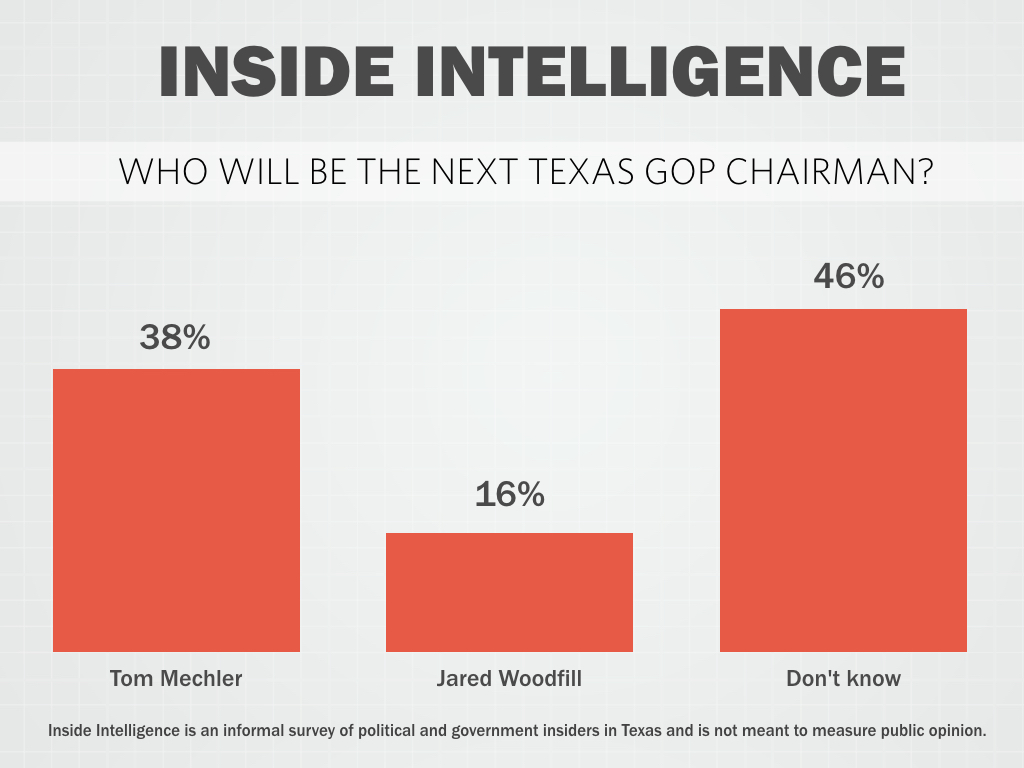 Who will be the next Texas GOP chairman?

• "Could care less, they just are needed to keep the machinery going and raise money, otherwise they are not relevant."

• "Jared Woodfill and the chair of the Travis County GOP will be quite a pair. Headlines candy for the press."

• "Lord help us if Woodfill gets control of the party. I mean, his vice chair running mate basically ran the party into the ground when she was chairwoman. Why on earth would anyone give serious consideration to a slate that includes her?"

• "Mechler is blah, Woodfill is a principled anti-establishment conservative who takes on the special interests and wins."