For this week’s nonscientific survey of insiders in government and politics, we asked about that voter turnout in Texas.

The Tribune reported this week that Texas still has the second lowest voting-age participation rate of all states that have held both Democratic and Republican primaries so far. Only Louisiana registers a lower participation rate.

We began the survey this week by asking if this is something the state's leaders should be addressing. On this, nearly two-thirds of the insiders said that something should be done to improve voter turnout in Texas.

We next presented a set of potential tools to boost turnout and asked the insiders as to which ones would work best. Online registration/voting was the most popular option, cited by 53 percent of the insiders. Better candidates were requested by 48 percent while expanded early voting and Election Day voter registration were each favored by 41 percent.

We followed that by asking which turnout improvement tool stands a chance of being passed out of the Legislature next session. Forty-three percent of the insiders thought lawmakers would be amenable to increasing the number of super precinct voter centers. That was followed by expanded early voting, cited by 23 percent, and online registration/voting, cited by 17 percent. 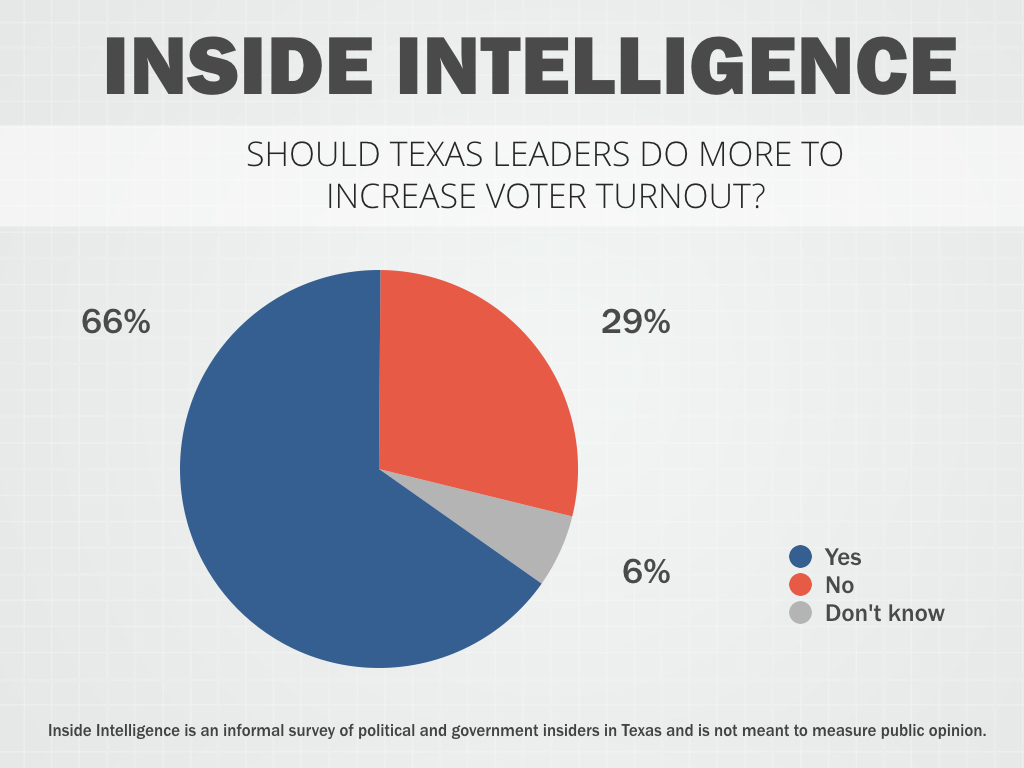 Should Texas leaders do more to increase voter turnout?

• "No. Why should citizens be goaded into voting? They're all adults. Low turnout is the natural selection of the political realm."

• "There is danger in using voter turnout as the single variable to measure effective democracy; it is a very slippery slope, this is pure politics in that it is viewed by the Ds as hurtful to the Rs, that's why the Ds support efforts to increase voter turnout. The exercise of the right to vote also includes the right not to vote. It can be interpreted as satisfaction as well; of course, the traditional view is that low voter turnout is somehow not acceptable. For example, if 100 percent turnout is the goal, then that is fiction. So, is 90 percent the goal? If not, is 60 percent the goal? What turnout figure is enough?"

• "Educate people in a more proactive manner about why/how/when/where to vote, how to evaluate candidates. Current info is lame. The Internet changes everything. Distribution of info is now inexpensive. Add curriculum to an existing mandatory class for high school seniors." 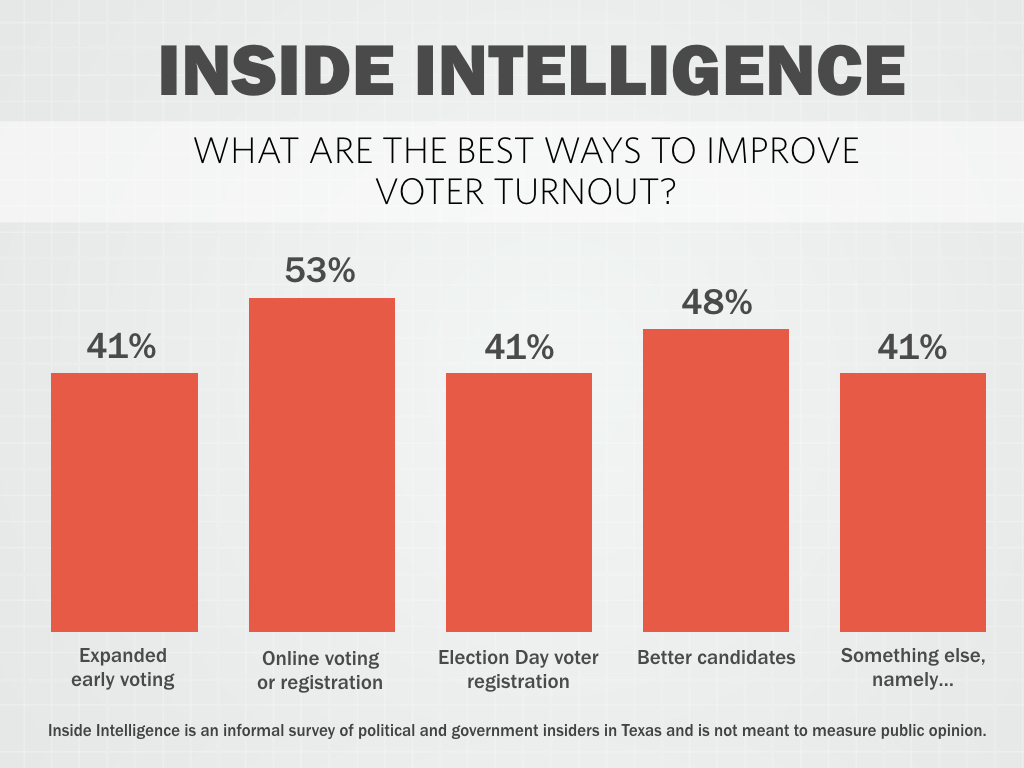 What are the best ways to improve voter turnout?

• "Better, more consistent, more user friendly information about elections, especially sample ballots. The Secretary of State's website is great if you know what you are looking for, but it's not very helpful for the new or infrequent voter."

• "You want to increase voter turnout? Have Apple lock everyone out of their iPhones until they enter the four-digit code used to vote electronically. No vote, no cell phone."

• "Competition between the parties. Too many races are decided in low-turnout Republican primaries and a few along the border in Democratic primaries."

• "If leadership in the state does something to make folks mad, people will get out and cast ballots; but they haven't, so folks aren't motivated to vote. If a majority truly didn't like the direction Texas was going, you would see that in election returns."

• "Better public information about candidates, better reporting, better coverage of the down ballot races the media largely ignores (at least outside rural areas). Lots of government happens at the local level, but local candidates are all but invisible in urban and suburban areas to all but the political junkies." 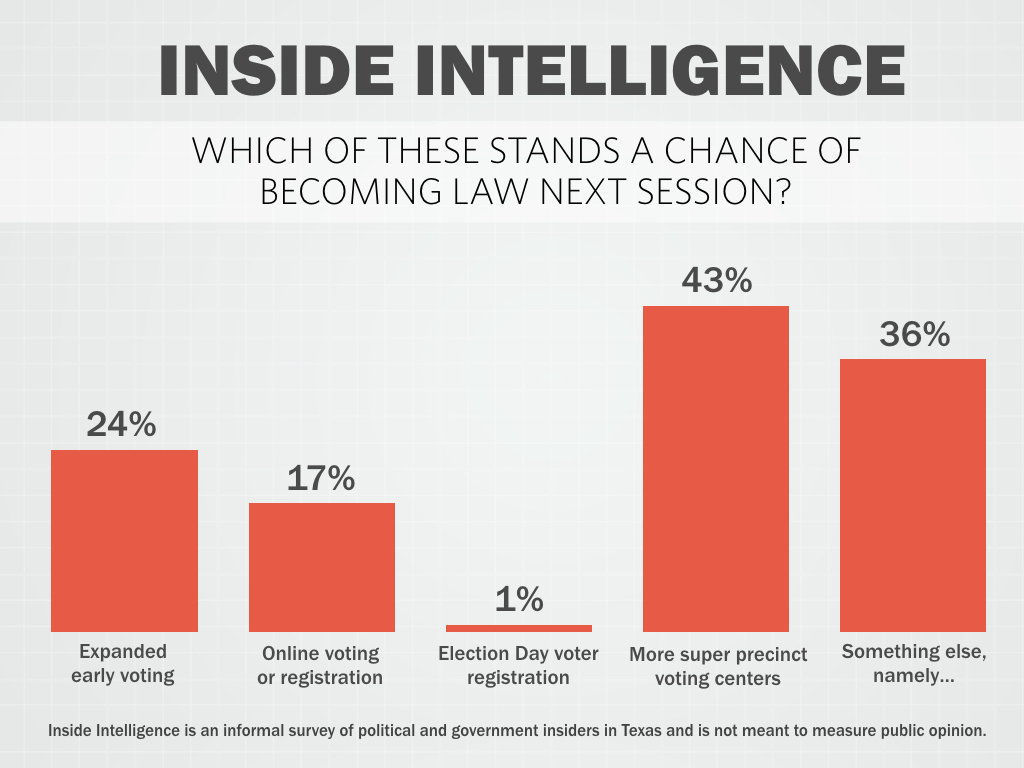 Which of these stands a chance of becoming law next session?

(EDITOR'S NOTE: Due to technical issues beyond our control, the accompanying graphic has an error. The fourth option should read "More super precinct voting centers".)

• "Interesting election cycle, so depending on turnout and results in the General, could be reduction of the 30-day period for registration and change in election code to create greater opportunity for third party."

• "Online registration would generate the same kind of fraud problems we now have with mail in ballots, and we don't have the resources to accommodate Election Day voter registration, since our elections are run largely by volunteers. No one wants to make Early Voting any longer — particularly now, when we have seen that many people voted too early and ultimately wasted their vote — ask those folks who voted for Jeb Bush for President. Bigger, more prominent Voting Centers might be helpful."

• "None of these or anything similar is needed. There's an old saying 'round these parts: You can lead a horse to water but you can't make it drink. Until voters truly care about voting and start showing up, there's no need to expand the voting opportunities when today's voters do not avail themselves of the plentiful options already in place."

• "I have been an election judge for more than 10 years, during every type of election, presidential, gubernatorial, primary, municipal, school bonds, etc. I can count on one hand the number of voters that ever mentioned any of these ideas. The reality is, chasing some arbitrary number is not a good use of public funds; let's face it, Ds are under the impression it helps them (Rs mistake this as fact). But the facts are not proven that any of these measures would increase voter turnout. The only other idea not mentioned is voting on Saturday." 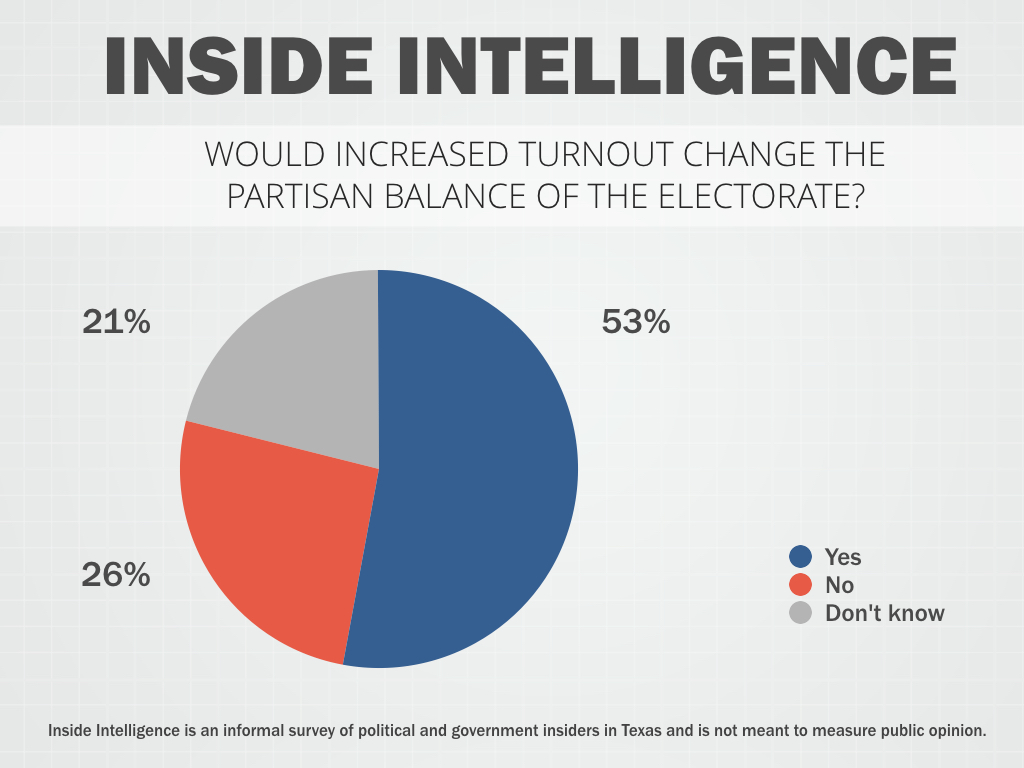 Would increased turnout change the partisan balance of the electorate?

• "Trump will let us know. It would appear he is turning out previously disenfranchised white and blue collar white voters in numbers never seen previously."

• "My hunch is yes, but it may become more Republican. It all depends on who is doing the increase. This year, we had increased primary turnout, but it was decidedly more Republican, so that may be telling."

• "Ds have always argued that the nonvoters were their folks. Trump's ability to pull bring in prior nonvoters makes that a dubious assumption."

• "Increasing turnout in party primaries is what's most important. As evidenced by this cycle, it will tend to moderate the candidates coming out of the primary. As a side benefit, increased primary turnout will also tend to increase general election turnout."

• "Somewhat but purposeful (and admitted) gerrymandering for political purposes makes our election system such a joke that nothing else really matters."