For this week’s nonscientific survey of insiders in government and politics, we asked about those upcoming party primary runoffs.

With the first round of the party primaries behind us, we thought now would be a good time to poll the insiders on what we can expect from the May 24 primary runoff elections.

We started by asking which of the upcoming runoffs in races previously featured in the Hotlist would be the most expensive. The insiders ranked the runoff contests for the two open state Senate seats as the ones that would spur the most campaign expenditures. Next up on the list was the congressional runoff between two Lubbock candidates for the open seat that stretches across large swaths of West Texas.

That was followed by the runoff for the Central Texas House seat where incumbent Doug Miller was drawn into overtime by a challenger from his right, Kyle Biedermann. Next up was another contest featuring a House incumbent in a runoff, Wayne Smith, followed by the race for the open South Texas congressional seat being vacated by Rubén Hinojosa.

The runoff featuring incumbent Missouri City Democrat Ron Reynolds trying to hold on to his seat was identified as the race that will draw the least amount of spending.

Next up, we asked whether the voters who turn out for the runoff elections in a couple of months would exhibit more partisan tendencies than those who voted in the first round of the primaries. On this question, 80 percent of the insiders thought the runoff voters would tilt more hardly partisan.

On the next question, we asked which of those three House incumbents mentioned above would win re-election. The insiders were most confident about Miller's chances, with 64 percent saying that he would win. Smith was favored to win by 61 percent of the insiders.

The insiders were less bullish on Reynolds' prospects but fully 50 percent thought that he, too, would win re-election.

We closed by asking for a quick two-sentence analysis of the message sent by the voters in last week's primary elections with a few representative comments listed below. 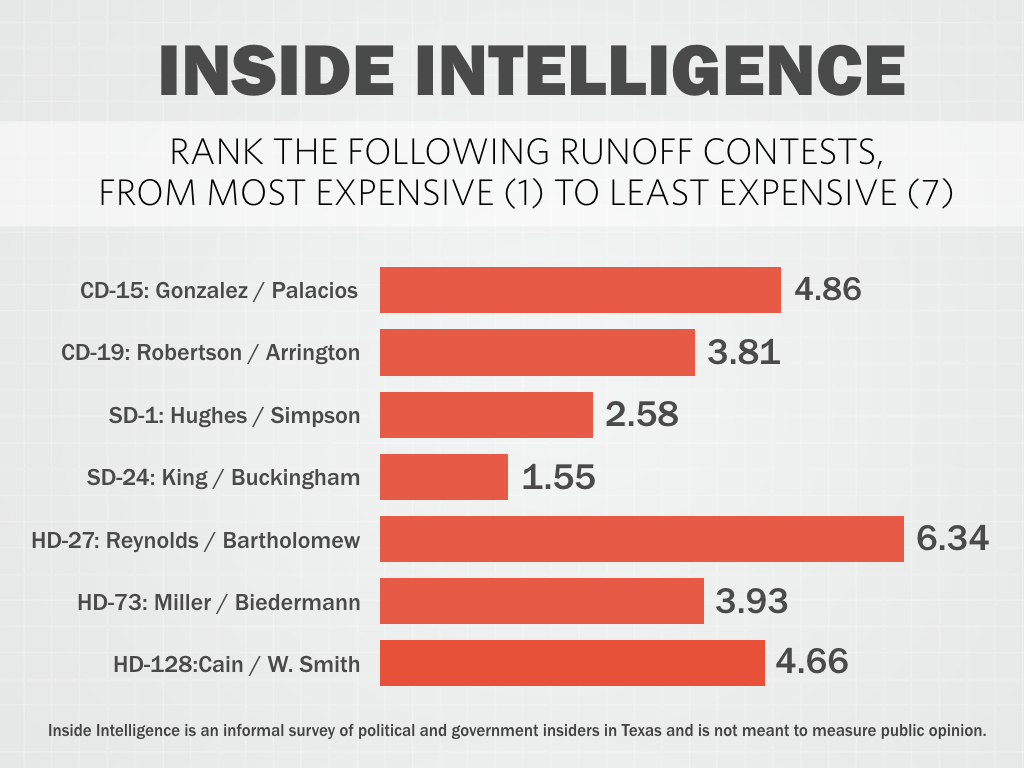 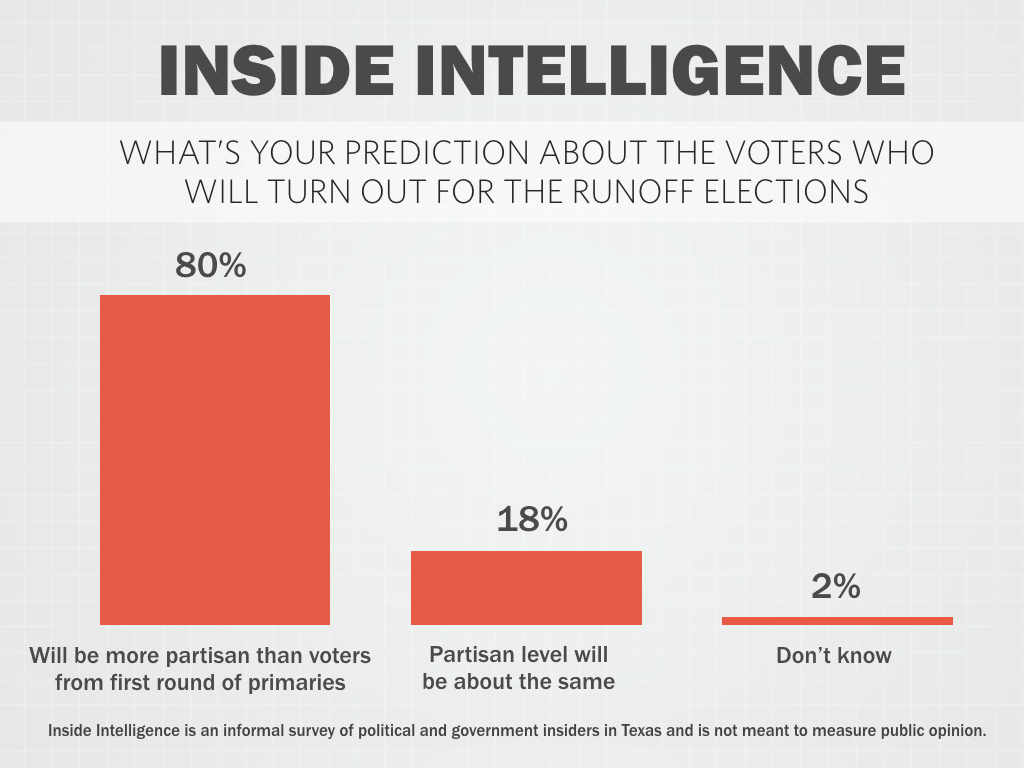 What's your prediction about the voters who will turn out for the runoff elections?

• "In the Republican primary, with Trump off the ballot, these decisions will be made by the purely partisan voters. Probably the same can be said for having Bernie off the ballot on the Democrat side."

• "That is not the right question for Republicans this cycle. Real issue: the runoff will see no voters who voted in the Republican primary for the first time ever on March 1."

• "Trumpsters voted for familiar names down ballot, which was the opposite of what they did at the top of the ballot." 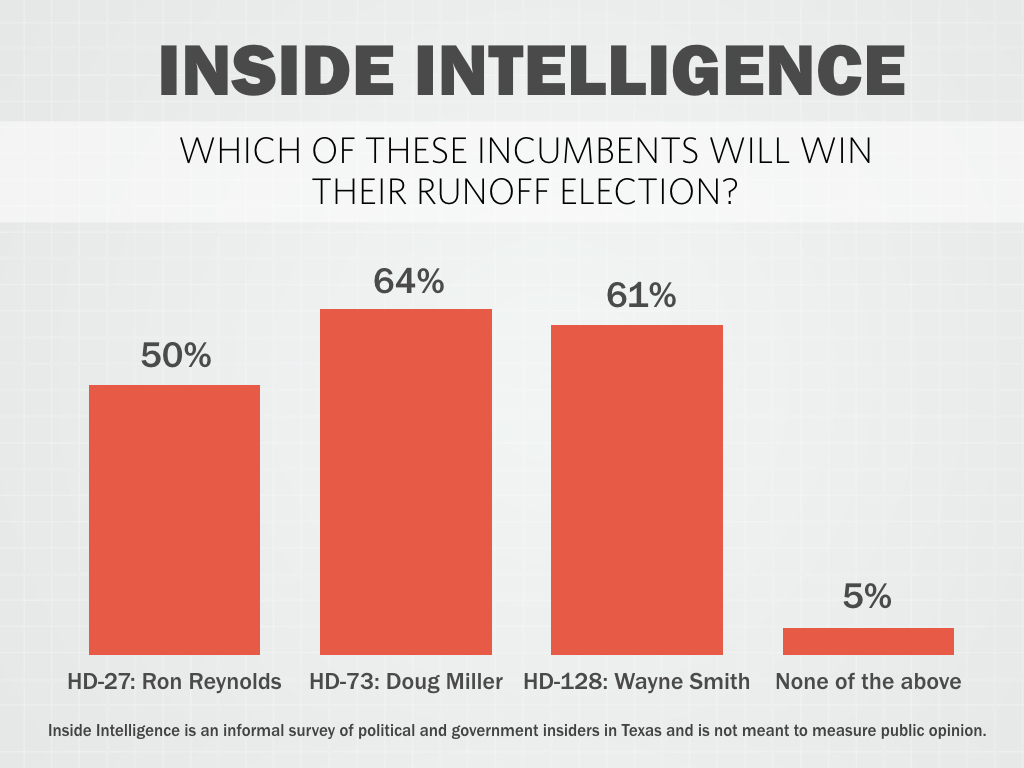 Which of these incumbents will win their runoff election?

• "Not sure, but it's damn harder now than it used to be to run as an incumbent."

Tell us what you think. In two sentences or less, analyze last week's primary elections.

• "You are about to witness a McGovern-style exodus, but this time it will be the Reagan Republicans leaving the party."

• "I think the Michael Quinn Sullivan party shored up their strongholds but lost ground in districts they hoped to infiltrate."

• "The anti-Straus crew might crack 20 votes this time around; otherwise, business as usual in the House, while the Senate gets even more 'conservatarian.'"

• "The laws of gravity and politics are still in play. Resources and disciplined campaign tactics prevailed over rookie attempts to create a new political reality."