For this week’s nonscientific survey of insiders in government and politics, we asked about those difficulties confronting the nation's major political parties this year.

This election cycle has spawned, from the presidential contest down to the odd county party chairman election, developments that no one could have foreseen. A common theme to all of this is an increasing inability of the establishment elements in each party to control insurgent factions.

If these disruptions are forecasting a breakdown in the major political parties, a third of the insiders said that voter anxiety and anger are the reason why. Another 13 percent attributed a breakdown to a coarsening society. Ten percent blamed opportunistic politicians and 7 percent blamed the news media.

And here's an attention grabber. A majority of the insiders — 57 percent — predicted that a major political party will splinter into two or more parties sometime in the next 20 years. 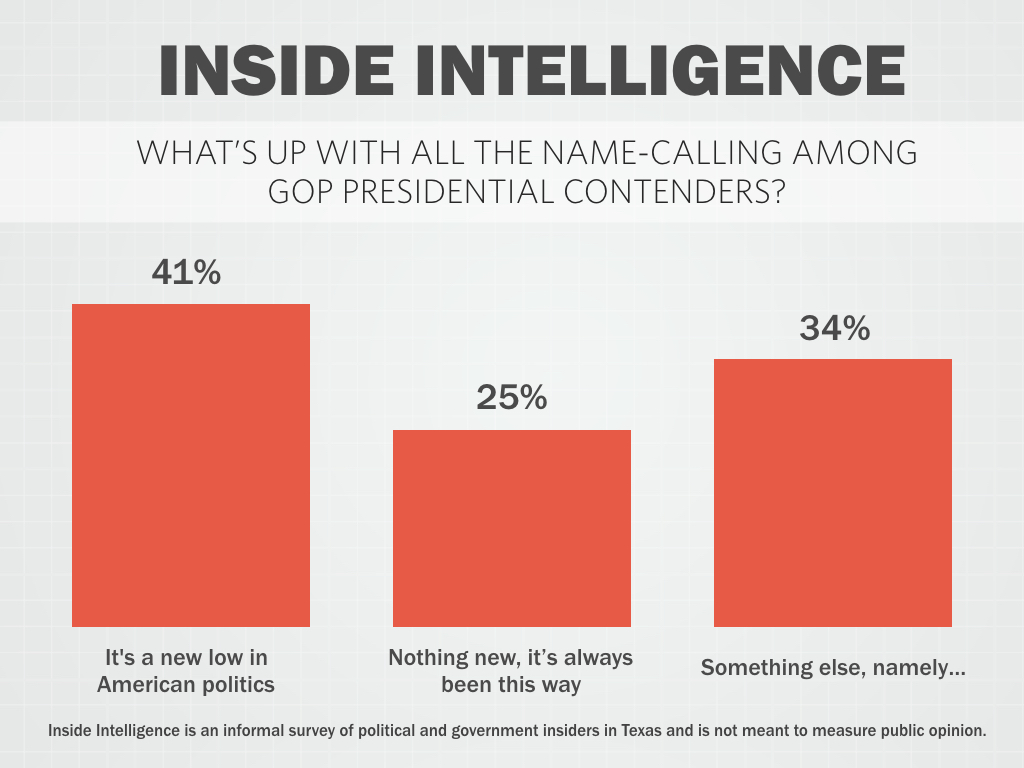 What’s up with all the name-calling among GOP presidential contenders?

• "The way Trump has dominated the news cycle has forced Rubio & Cruz to imitate the behavior. It is childish, but seems to be effective. That says more about the electorate than the candidates!"

• "The fact is the American electorate is fed up with D.C. politics and stalemates. This country has serious issues to deal with, such as social security, national debt, terrorism, and infrastructure. We the People are fed up!"

• "Recent campaigning is rather tame, but in the good ol' days politics was truly a contact sport and today's 'attacks' pale in comparison. I mean, 'Ma! Ma! Where's my pa?' compared to misrepresenting a procedural vote as support/opposition for a bill."

• "The kids from the 70's who grew up reading Al Jaffee's Snappy Answers to Stupid Questions in Mad Magazine are now running the show. But, yes, this is nothing new."

• "Dramatic change in the R party. Trump is bringing in populists, nationalists, and other disaffected to challenge both the far right and the establishment. They don't like it one bit, which explains the nastiness. Hillary will push them together. And, if Trump has any discipline, he has a good chance to be president." 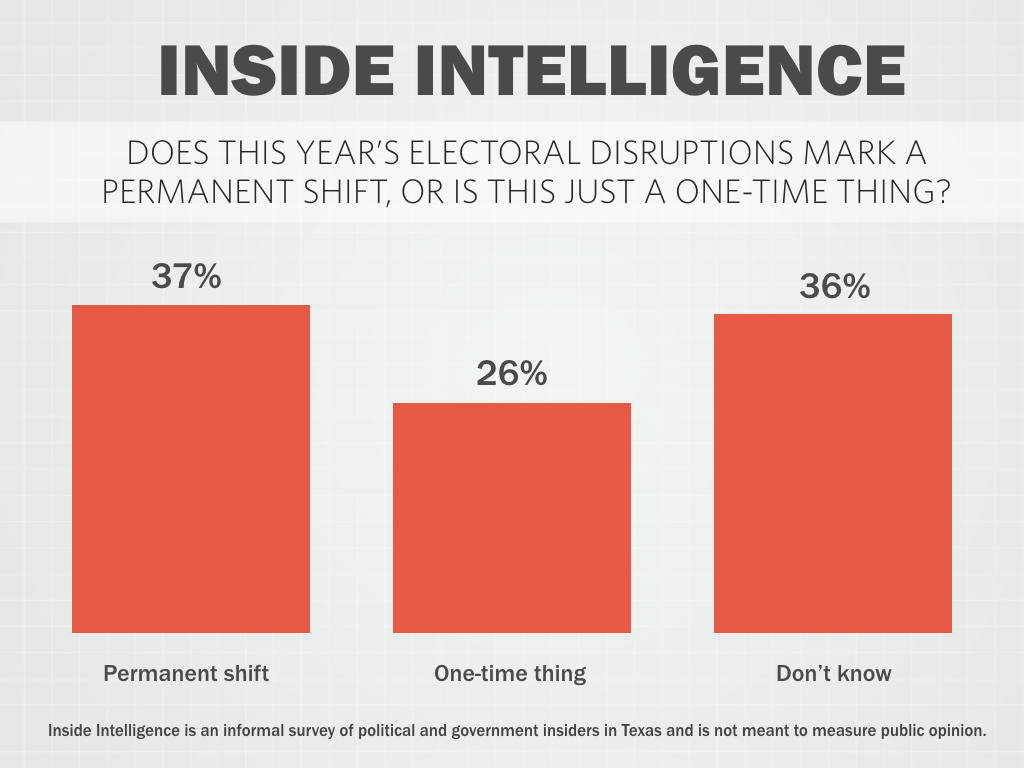 Does this year’s electoral disruptions mark a permanent shift, or is this just a one-time thing?

• "If this is permanent, it will discourage good people from seeking public office."

• "It's another step along the path of personality politics and away from politics based on issues and institutions."

• "The Republican Party is breaking up. The rank-and-file is now longer buying what Big Money and the Religious Right are selling. The Democratic Party is holding it together, at least until the Baby Boomers are eclipsed by the much more progressive Millennials."

• "I do not believe this is static. I fear to imagine how far this can go in coming years, especially when this anger is no longer directed through electoral channels." 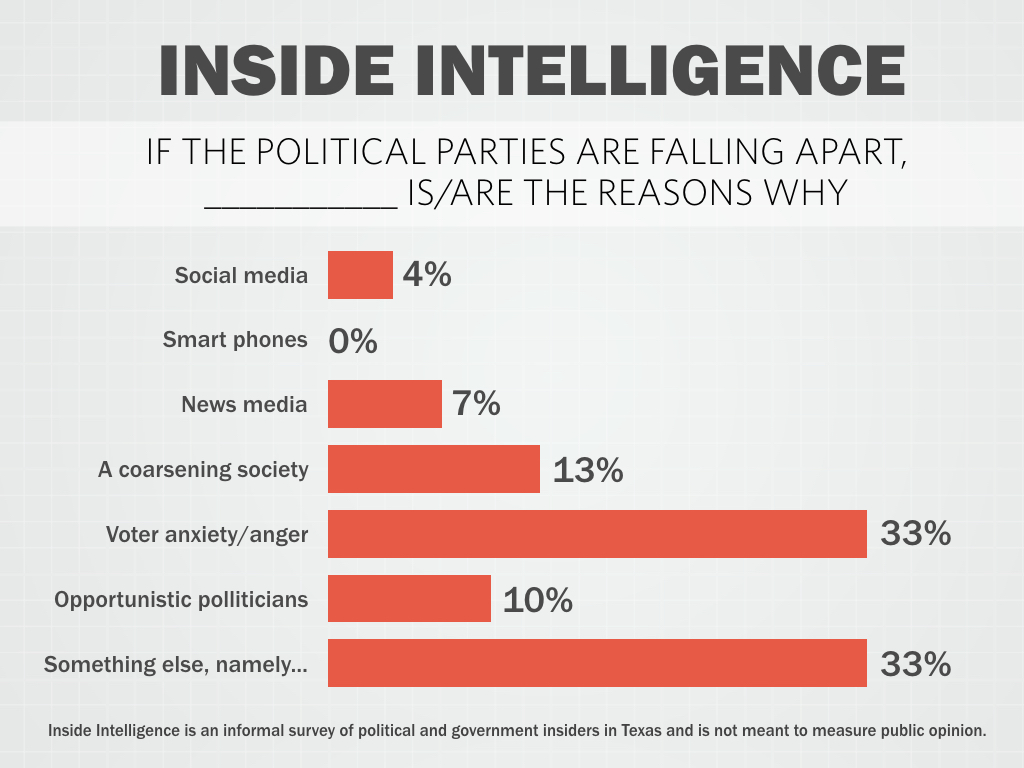 • "The middle class and blue collar non-protected class of voters are mad as hell and they aren't going to take it any more. They feel political correctness and a pro bias toward minorities pursued by their government is disadvantaging them and their children."

• "Political parties have been declining in importance for 60 years, ever since 'reform' took nominating power away from party veterans and gave it to general public."

• "Social media, smart phones and the news media are all components of our instant entertainment consumption society — one for which an increasing number of people is unaffordable. So even though there's nothing really valuable to be had, people still feel anxious, angry and left out."

• "Lack of rules in media that give equal time to people to respond to lies and lack of requirement of news on public airways."

• "Everyone is brave on social media. Just like the telegraph, this new technology will ruin us." 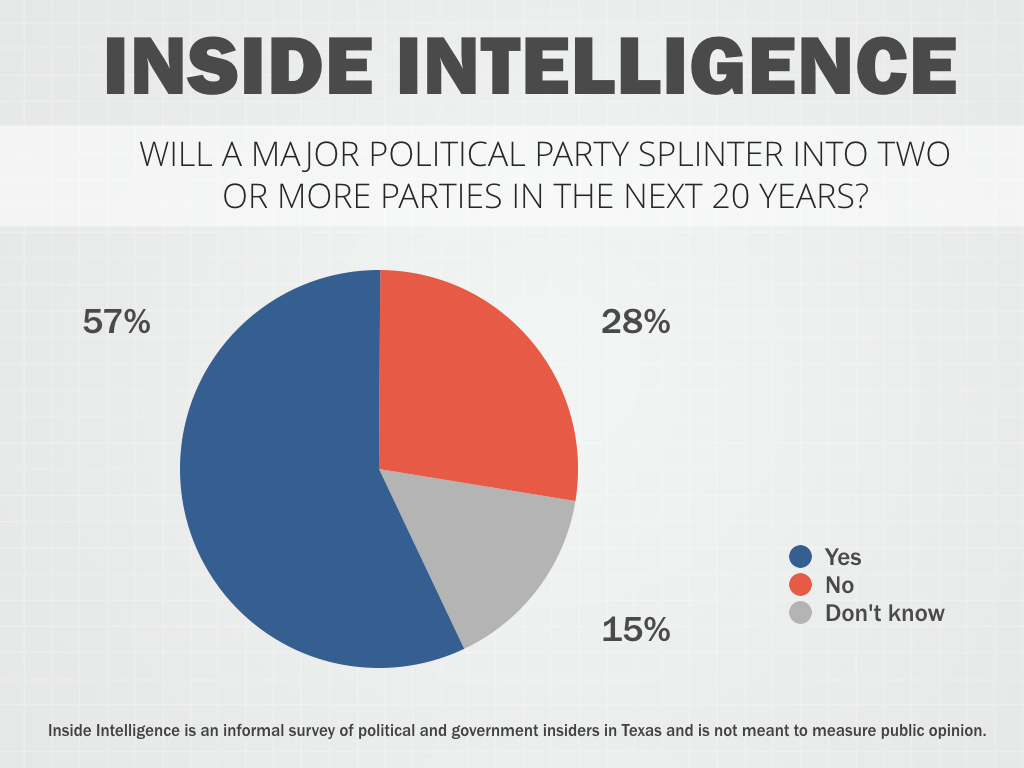 Will a major political party splinter into two or more parties in the next 20 years?

• "The two party system will be hard pressed to accommodate the many tribes in this rapid splintering of national identity along the lines of geography, ideology, ethnicity, morality and incivility. Not a totally new phenomenon, just the most recent and significant since the 1960's."

• "We may end up in more of a Euro-style political environment over the long run. The Democratic Party will become the de facto socialist party, the Republicans will become what the Ds are now, and a small, right wing Nationalist party will pop up to bedevil what remains of the GOP. Race may become a more prominent feature and with fewer apologies than now."

• "The GOP center cannot hold. But don't crow, Ds — once there are more choices on the right, the D coalition will also split apart. Eventually, we will be like every other Western democracy and have multiple parties."

• "One can almost see the more conservative liberals and the less conservative conservatives grouping together into the party of the middle, if they could find a compelling champion. Maybe we call it the Formerly Silent Majority Party?"