At age 22, Obed Josafhat Rodriguez has a criminal history stretching back a decade: The Houston youth was arrested for stealing a car at age 12, and breaking into another at 13. By 15, he added arrests for cocaine possession, armed robbery and assault to the list. He'd done two stints in state juvenile facilities before reaching adulthood.

Though he had a fake Social Security card, his Mexican citizenship surfaced fairly quickly during his trips through the juvenile justice system. "He has only been in the U.S. for about two years and he reports that he did not have behavior problems in Mexico,” wrote Dana Kelly, a clinician who evaluated Rodriguez for a juvenile court after his arrest in 2006. “Josafhat admits that he has had a hard time to adjusting to moving to the U.S. because his environment was so different in Mexico.”

Three years later, when Rodriguez was 16 and facing a cocaine possession charge, another psychological screener presented a murkier report. "Josafhat is not certain whether he was born in Mexico or the US, but he lived here for a brief time as a young child, then returned to Mexico," wrote court-appointed clinician Lynn Corazo in 2009. "He lived with his mother, grandmother, brother and cousins after his parents separated when he was 3 or 4; this may have been the point at which the family returned to Mexico."

But juvenile courts in Texas, like most nationwide, have no path to check a juvenile's immigration status and, as a rule, don't verify citizenship, which is the purview of the federal government.

Rodriguez is now serving dual life sentences in Texas prison for two capital murders. His story illustrates how heavily U.S. Immigration and Customs Enforcement, which relies on the adult legal system and local law enforcement to find undocumented immigrants, has minimal reach into the juvenile process.

As he grew from teenage car thief to two-time killer, Rodriguez' citizenship status failed to trigger any action when he was a juvenile. As an adult, he was removed from the country once but returned to Houston.

“When I went to TYC, I had a Social Security number. They never said nothing.”— Obed Josafhat Rodriguez

Several months later, Rodriguez violated the terms of that probation and was sent to the state's correctional facility for juveniles: the Texas Youth Commission, which was later reorganized and is now called the Texas Juvenile Justice Department.

Rodriguez says he spent two years there and was released at age 15, when he returned to Houston, but state officials can't confirm that because the records are confidential.

On March 19, 2009, when he was still 15, Rodriguez showed up in the Harris County juvenile court system again after he and another teen were stopped for not wearing seat belts and several bags of cocaine were found in the car. When he was arrested with a group of friends four months later for robbing a motorist at gunpoint and assaulting him, he was sent back to the Texas Youth Commission.

Although the federal government can place immigration detainers — requests to hold an individual for federal immigration officers once their local criminal case is decided — on juveniles, it appears to happen rarely, since youthful offenders are not considered criminals in the adult sense of the word. There is no record that Rodriguez ever came to the attention of federal immigration authorities as a youth.

The Harris County Juvenile Probation Office, which operates juvenile holding facilities after their initial arrest, has limited procedures for noncitizen detainees. Listed on a one-page document, the procedures don't explain how ICE officers verify whether an arrested juvenile is an American citizen, or exactly how a detainer is placed on a juvenile.

There is more direction if the undocumented juvenile has no family or guardians in the United States and has been charged with a "felony-grade offense." Then, Harris County's procedure is to contact ICE officers to "determine if the agency needs to interview the juvenile at the Detention Center."

What is less clear is how ICE locates and vets the citizenship status of juvenile immigrants in youth lockups, particularly if they have parents, as Rodriguez did.

Juveniles in Texas are technically not found guilty of crimes. Instead, courts find them “adjudicated delinquent” and a sentence is applied.

Jim Hurley, spokesman for the TJJD, confirmed that the agency accepts federal detainers for youth offenders. Currently, there are 12 juvenile offenders out of 1,713 serving their sentences with the department who have a federal immigration detainer.

After his juvenile stints, Rodriguez began showing up in the adult criminal system.

On Nov. 26, 2011, he was sentenced to six days in the Harris County Jail for marijuana possession, according to the Harris County District Clerk’s Office. He served three after getting credit for three spent in custody after his initial arrest, and was released.

Although the Harris County Jail has nine embedded ICE officers and nine deputies trained as immigration officers, there’s no record Rodriguez's citizenship was ever questioned.

The summer of 2012, Rodriguez says he was arrested with another stolen car, this one belonging to 61-year-old Matthew Rouhani, who had been murdered in 2011. Rodriguez said he was questioned by Houston Police Department detectives at Houston’s city jail.

“I told them I had nothing to do with it,” Rodriguez said. Within a week he was released and the vehicle charges appear to have been dropped.

Assistant Harris County District Attorney Inger Chandler confirmed that Rodriguez was initially questioned, with the hope he was a witness to the crime. “I thought he was a fact witness,” Chandler said.

Rodriguez said he was arrested again in June 2012 for passing a phony $100 bill and an unlawful use of a weapon. Shortly after arrival at the Harris County Jail, his citizenship was questioned and Rodriguez says authorities finally figured out he was undocumented.

“They found out the Social Security number was for somebody else,” he recalls. A federal detainer was placed on Rodriguez.

Shortly afterward, Chandler, the assistant prosecutor in the Rouhani murder, began discovering more evidence that she said pointed to Rodriguez, but when she called the Harris County Jail to locate Rodriguez she learned he was gone.

According to ICE spokesman Greg Palmore, Rodriguez was deported in January 2013 to Mexico.

Chandler knew that many of those jailed in Harris County were repeat visitors, so she placed an alert, known at the DA’s office as a “tickler,” that would inform her if Rodriguez was ever jailed again in Harris County.

“Sometimes our witnesses frequent the jail,” she joked.

Rodriguez said he and other deportees were taken to Laredo and turned over to the Mexican government.

“I was 18 and never been in Mexico my whole life. And I told them I didn't know nobody. So I told them I was just trying to be able to come back [to Houston].”— Obed Josafhat Rodriguez

On the ride there, Rodriguez was already apprehensive about returning to a country where he had no relatives and friends. He'd heard nothing but bad about what the future held for deportees. Most are approached quickly by those working for the brutal Los Zetas cartel, he said.

“They got the Zetas over there. And they kill people there if you don't want to get with them,” Rodriguez said.

Instead of sticking around in Nuevo Laredo, Rodriguez said he headed south towards Reynosa, stopping in the town of Miguel Alemán, where he was quickly approached by ski-mask wearing men with guns working for the Gulf Cartel. They took him to a ranch and strip-searched him, he claims.

“I was 18 and never been in Mexico my whole life,” Rodriguez said. “And I told them I didn't know nobody. So I told them I was just trying to be able to come back [to Houston].”

For the next two and half months, Rodriguez said he worked unloading shipments of marijuana brought across the Rio Grande on the Texas side of the border. When he agreed to continue working for the gang in Houston, he returned, brazenly driving through the internal checkpoint near Falfurrias. 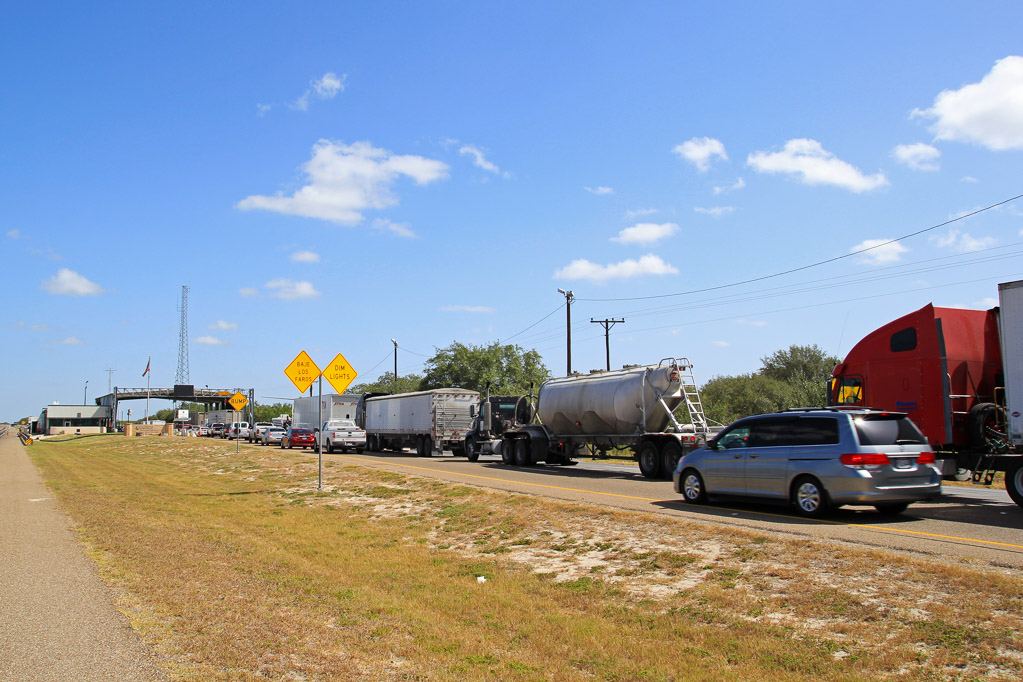 Enlarge Photo by: Spencer Selvidge
Motorists wait in line at the Border Patrol checkpoint in Falfurrias, Texas. The station inspects all vehicles that travel north from the Rio Grande Valley on Highway 281.

"If somebody says they're an American citizen and the agent doesn't have a suspicion that the person is lying or committed some other type of crime, they would be sent through the checkpoint," Moran said.

By the autumn of 2013, Chandler, the Harris County prosecutor, had moved on. She was transferred to another division and for the most part had forgotten about Rodriguez. A second suspect in Rouhani's murder, Jay Paul Jackson, was charged and awaiting trial.

On Labor Day weekend 2013, two years after Rodriguez fell off Harris County's radar, Chandler fielded a call from a police officer and learned that Rodriguez was not only back in the United States, he was back in the Harris County Jail, arrested for the shooting death of a game room employee, Yolanda Lara, which was captured on surveillance video.

Rodriguez pleaded guilty to both shootings, and he’s serving concurrent life sentences without parole, some 10 years after he first entered the criminal justice system as a juvenile.

Today, he refuses to talk about either murder.