For this week’s nonscientific survey of insiders in government and politics, we asked about valuing the stock of the remaining presidential hopefuls.

The four early voting states have spoken, at least on the Republican side of the ledger. South Carolina Democrats, meanwhile, have their say this weekend. In other words, we thought it was a good opportunity for you to tell us what you thought about the stock value for the remaining presidential hopefuls with an eye toward what might unfold next Tuesday when Texas and a bunch of other states cast ballots.

The insiders were downright bearish on Texas' native son, Ted Cruz. Nearly 70 percent branded his stock as "sell" with just 6 percent advising "buy." Donald Trump's stock, meanwhile, was rated "buy" by 56 percent and Marco Rubio's stock was given a "buy" message by 57 percent.

On the Democratic side, the insiders were bullish on Hillary Clinton. Her stock was rated "buy" by 65 percent. Bernie Sanders was deemed a bear with 68 percent of insiders giving his stock a "sell" advisory.

We added the name of Michael Bloomberg, the former New York City mayor who continues to float trial balloons about a third-party run in the fall. The insiders, though, are skeptical for the moment. More than two in five advised "sell" on Bloomberg stock while just 17 percent called it a "buy" stock. 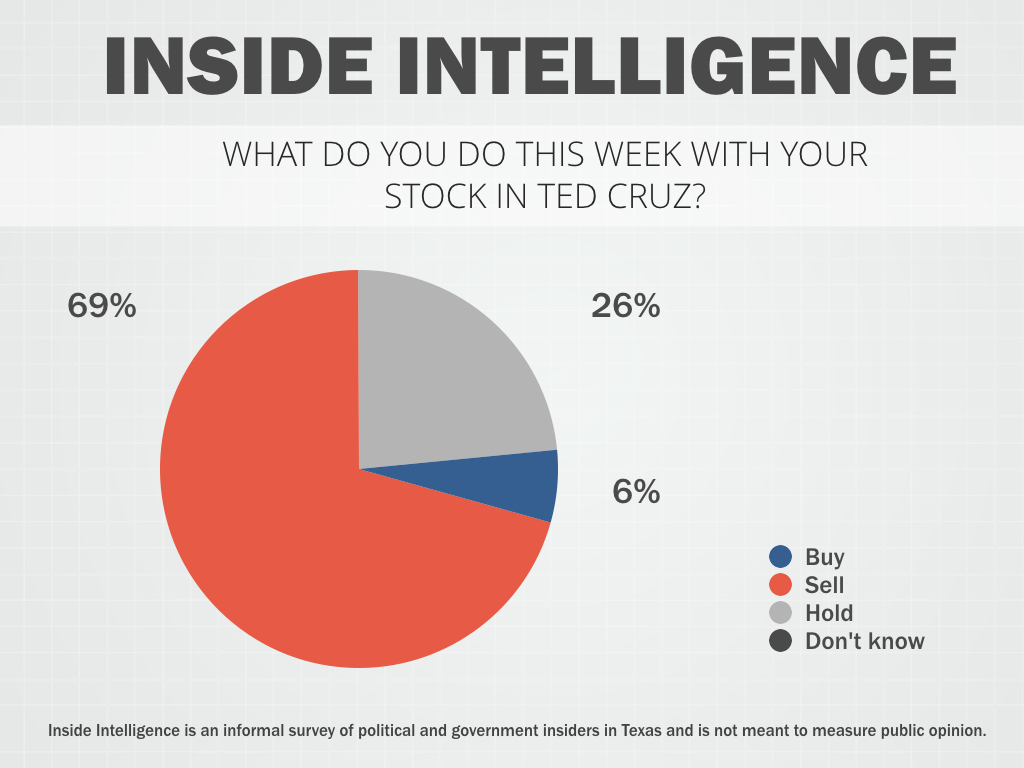 What do you do this week with your stock in Ted Cruz?

• "Cruz is the next Ron Paul. He'll never get above a third, and even his friends don't like him."

• "He's had recent setbacks, but his chances of winning remain as strong as those of Trump and Rubio."

• "Depends on how well he does in Texas. If he scores a big win here, then it is a 2 person race and he can win a 2 person race if the choice is a sane person versus an insane person. He does not do as well against Rubio when voters can choose between Cruz and a person who is not condescending or prone to dirty tricks."

• "Cruz is the supposed evangelical candidate. But could not win South Carolina — the evangelical state. He's toast."

• "He's rounding first after focusing on a small ball (field, data) and hitting a single up the middle. But he's running into an inevitable squeeze play, trapped between Trump and Rubio." 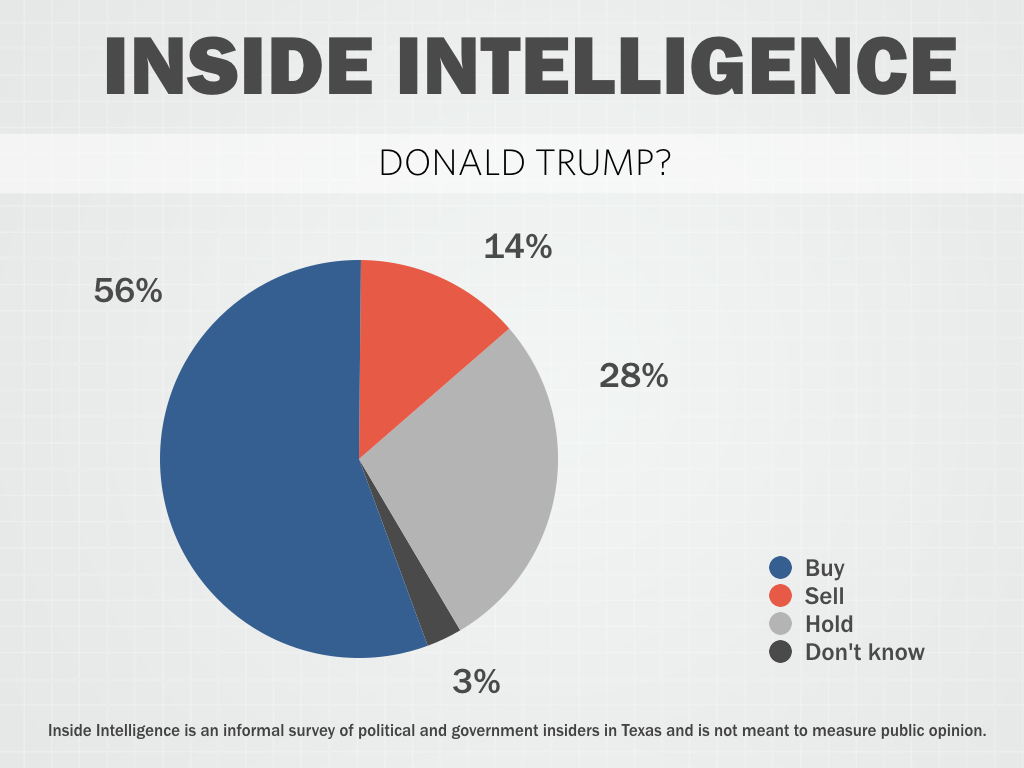 • "When it becomes a two-man race, Trump will lose."

• "I said from the beginning that Trump would do well. He was the first candidate to understand and reflect back the anger of the electorate. The nomination is his."

• "At this point he is, sadly and unfortunately for reasonable, rational people, a virtual lock to secure the nomination. He's leading or within striking distance in pretty much every Super Tuesday state and those on the 15th (even Ohio!).  Be like Trump — a winner, baby — and buy!!"

• "Was he ever in a Twenty Mule Team Borax commercial? (Cryptic Reagan reference for you youngsters)"

• "Keep waiting on him to explode... but seems to be Teflon Don." 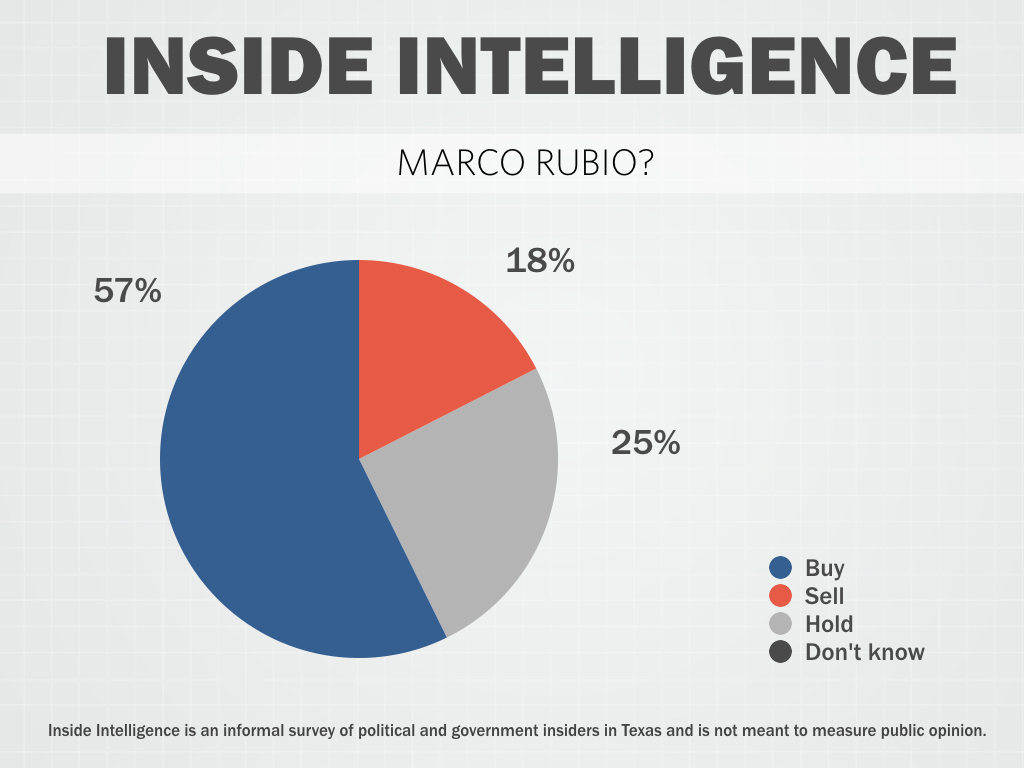 • "Still hasn't shown enough to be considered an endurance runner in this race. He may be done on Super Tuesday."

• "He still has an outside shot of getting the nomination if certain folks will get out of the race so that the adults can coalesce around him. Even if he doesn't get the nod, he hasn't burned the Veep bridge. And even if he doesn't get the Veep nod, he can pursue a high-profile gig (talking head, RNC chair, etc.) to stay in the public's eye until the next go-round. Hold."

• "Rising nicely, but does he have enough time?" 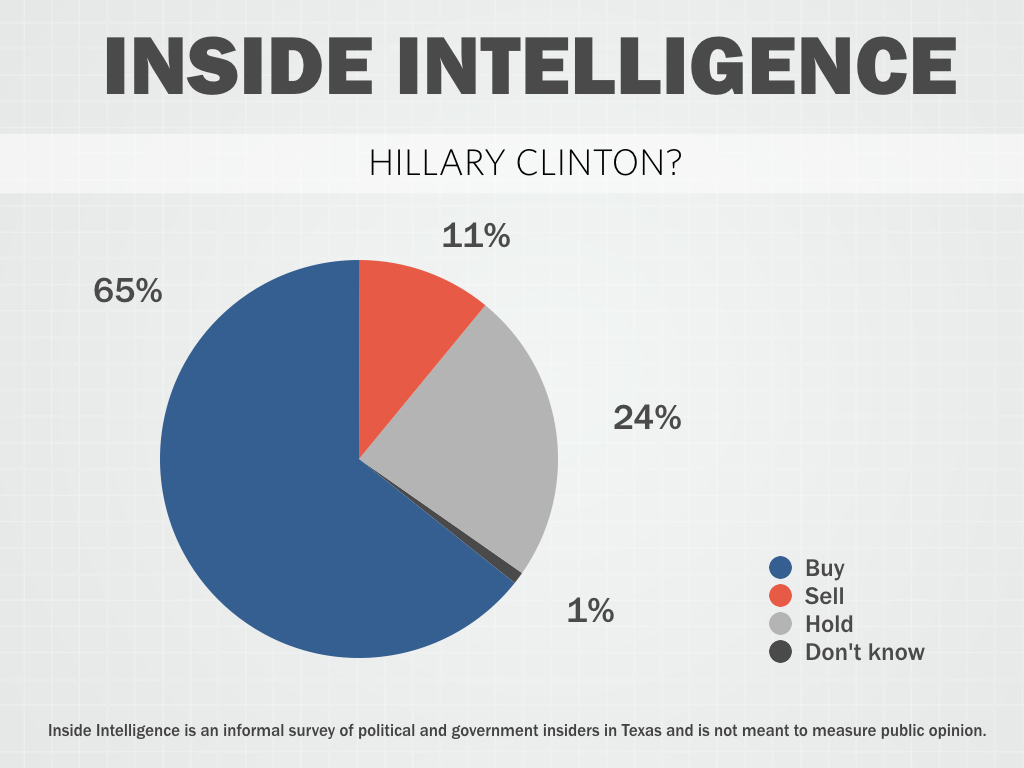 • "The increase in minority voters on Super Tuesday should put an end to this quixotic, albeit fun to watch, campaign."

• "A victory in Nevada, be it ever so heralded by the national media, is not necessarily an accurate predictor of momentum. To the surprise of no one, she continues to demonstrate the reasons people are so reluctant to embrace her."

• "If Democratic voters don't deliver her, super delegates will."

• "Sooner or later Bernie will realize the game was rigged from 'go.' The only thing that can stop her is the FBI's investigation and possible DOJ prosecution."

• "Not sure that 6,500 votes in Nevada constitutes a huge wave or endorsement of her candidacy in a state of 3 million people... we have more votes cast in most of our Texas House seats." 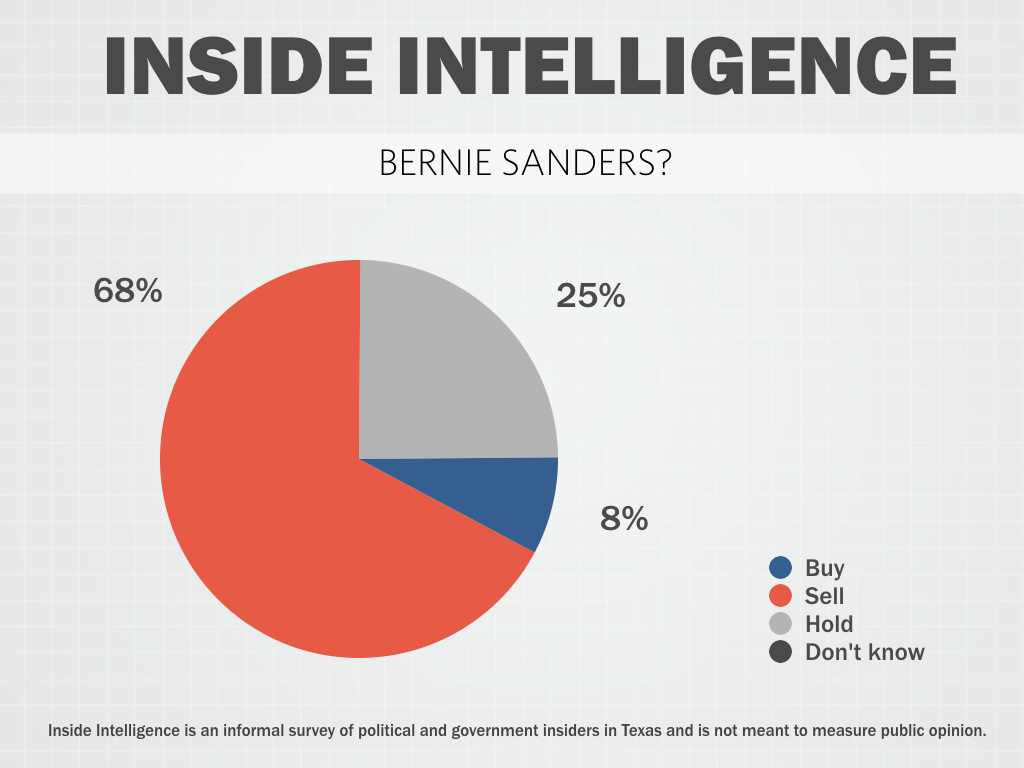 • "He marches confidently on to glorious defeat, standing at the ramparts, taking the bullets, falling gallantly."

• "If he can survive March with any kind of momentum, he could well surge in the later primaries."

• "He's already won by pulling Hillary to the left."

• "Why do I always think he is channeling Eugene V. Debs?" 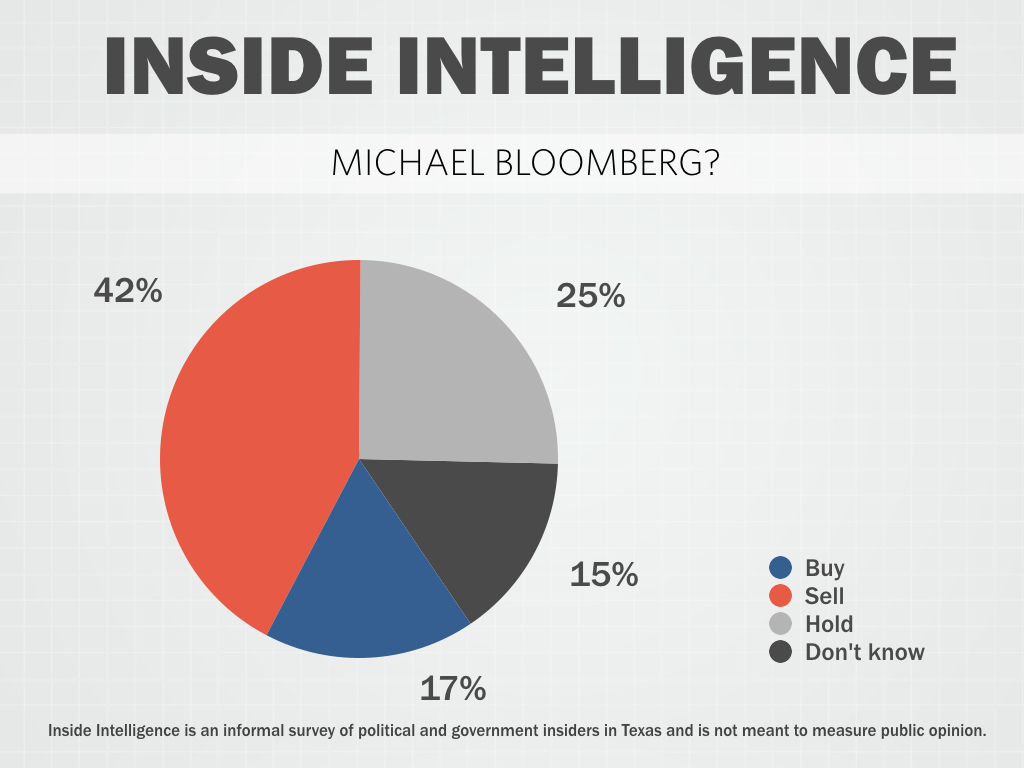 • "Bloomberg has dropped the ball. He needed to act decisively, much earlier. Even if he gets in now, he can't stop the general push that Trump is making. Going independent would be shot down by the GOP establishment. Get the fork... he's done before starting."

• "Would seem to be getting pretty late for an independent run. He probably could have made a difference and mounted a serious bid had he jumped in earlier."

• "There is no real need for him to enter the race. In a Trump-Clinton match-up, business will find a friend in Clinton."

• "Fire your adviser for buying Bloomberg stock in the first place. He cannot realistically make a third party run. He cannot get on the ballot in several states."