For this week’s nonscientific survey of insiders in government and politics, we asked about selecting the next U.S. Supreme Court justice and choosing Texas judges.

The way the nation and Texas selects its members of the judiciary is making news, whether it's the high stakes confrontation between President Barack Obama and the Republican-led U.S. Senate over how a successor to Antonin Scalia should be chosen or whether an incumbent justice on the Texas Supreme Court could lose her seat to a perennial also ran in the upcoming party primaries.

The Senate Republican leadership has moved quickly to stake the position that the vacant seat on the U.S. Supreme Court should remain unfilled through the remaining 11 months of Obama's presidency. That sets up a conflict that will color the political conversation through the remainder of this year's electoral cycle.

We began by asking if a fight of this nature helps one of the parties over the long term. A slight majority said it helps the Democrats more while the insiders split nearly evenly between it helping Republicans (23 percent) and helping neither party (22 percent).

The question of who succeeds Scalia also brings into focus how high the stakes are in this year's presidential election. We asked next if this hurts any of the current GOP presidential field. Donald Trump was seen by the most insiders (43 percent) as at risk. He was followed by Ted Cruz (27 percent), John Kasich (14 percent), Jeb Bush (10 percent) and Marco Rubio (7 percent).

Fully 30 percent of the insiders, though, thought none of the candidates are put at risk by elevating the issue of the Supreme Court in the minds of the voters.

With the remaining questions, we turned to the Texas system of choosing judges through partisan elections. Justice Eva Guzman's re-election bid against perennial also ran Joe Pool Jr. has attracted the attention of a broad spectrum of elected officials and conservative activists who are warning against an electoral surprise in a race where the candidates lack strong name ID. The oft cited example in recent Texas history is the loss by Justice Xavier Rodriguez to Steven Wayne Smith in the 2002 Republican primary.

Lt. Gov. Dan Patrick, for instance, took to Facebook this week to exhort his followers to vote for Guzman and raise awareness of her primary contest.

We finished things by asking if the state should continue using partisan elections to choose the members of the Supreme Court and the Court of Criminal Appeals. On that question, nearly seven in 10 thought judges shouldn't be selected in that way while about three in 10 said to keep the system as it is. 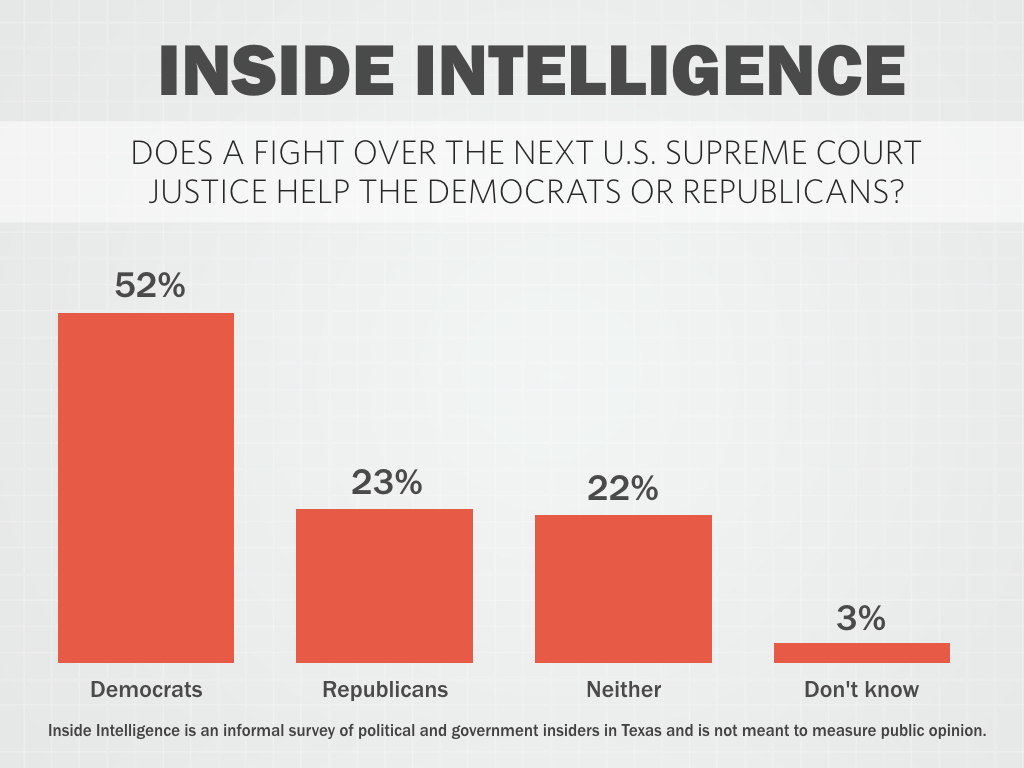 Does a fight over the next U.S. Supreme Court justice help the Democrats or Republicans?

• "Depends on how it is played. If the President appoints a centrist, then it makes it harder for the R's to object and slow walk the nomination. If the President nominates a left leaning nominee, the R's may have more cover to stall. Either way, the President will have the upper hand in that the country will consider it irresponsible to wait a whole year before a President submits a name."

• "But it doesn't have to if the Rs will stop grandstanding and let the process work. Vetting nominees is the process. So what if it takes until after the election to decide you don't like any of the Obama candidates? If you win the election, great. If not, the choice you have to make may not be any worse."

• "My assumption is that the decision by Obama will be made specifically on what he believes causes the most political damage for the Republican presidential candidate. That would suggest Obama will nominate a Hispanic. The Republicans' rejection of any candidate put forward by Obama will be portrayed by Democrats as racism against Hispanics and motivate minority votes for the Democratic nominee."

• "Republican voters have been waiting for seven years to see their party stand up to Obama while he's run through them like stuff through a goose. It's now or never for the establishment." 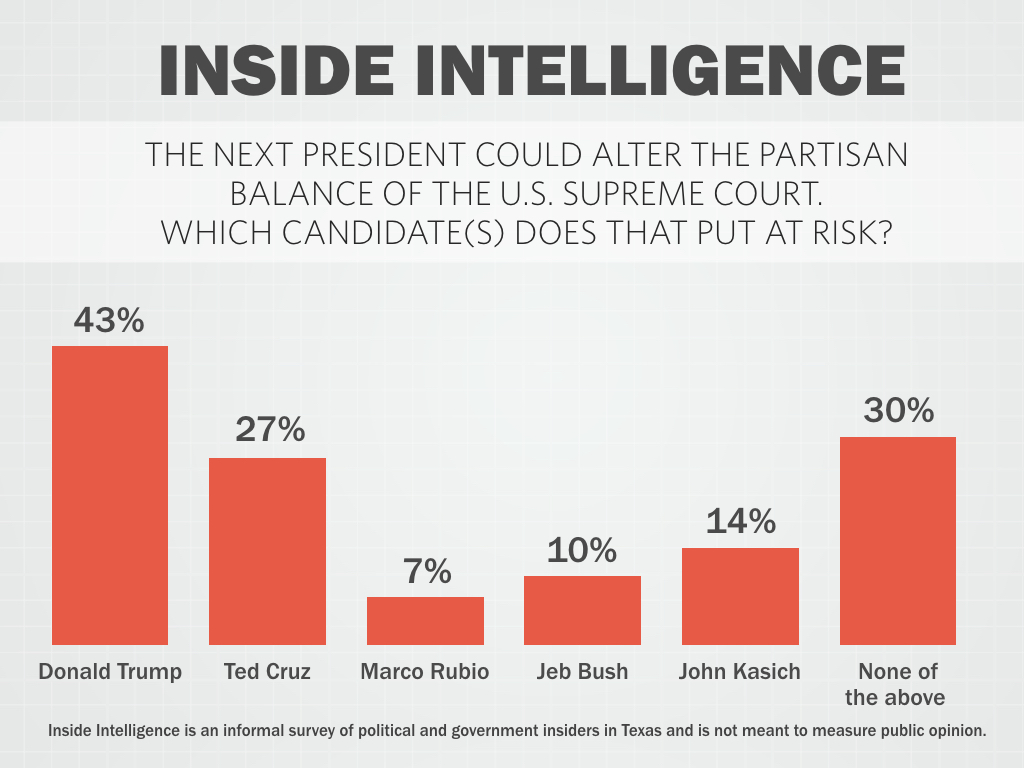 The next president could alter the partisan balance of the U.S. Supreme Court. Which candidate(s) does that put at risk?

• "This would hurt Cruz or Trump in the GENERAL election because they are generally perceived to be ideologically extreme. That same perception probably hurts Bush, Rubio and Kasich in the primary."

• "Cruz and company will use this as a reason for voters to pick him over Trump. He has the most to gain by shifting the focus to gun rights, etc., showing Trump is out of touch with the conservative views. None of the others benefit or lose because they're not in the race yet."

• "Who knows who Trump would appoint — and Kasich is the kind of guy who could appoint a squish. Ironically, voters know they can't trust these two very different guys with the Supreme Court appointment. No worries about the other 3."

• "None of the above or below. In the long run, the only thing that matters is keeping an Obama appointee off the court."

• "The Court doesn't have a 'partisan balance.' It definitely has an 'ideological balance.' Witness Earl Warren, Sandra Day O'Connor, and Anthony Kennedy." 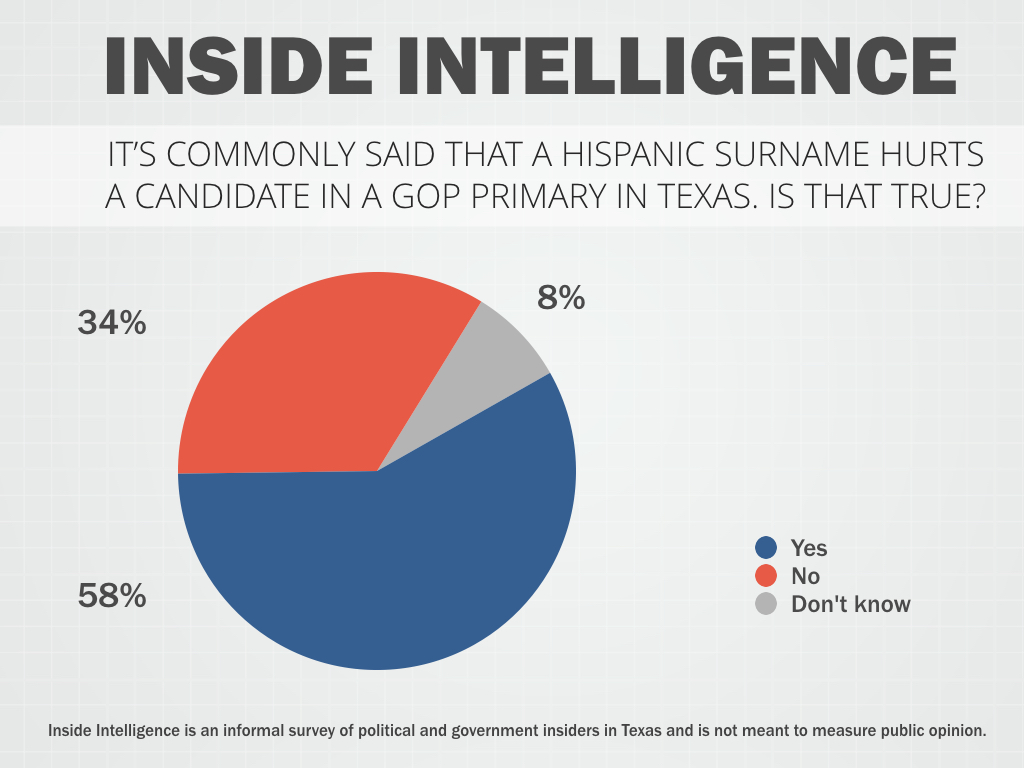 It's commonly said that a Hispanic surname hurts a candidate in a GOP primary in Texas. Is that true?

• "It didn't hurt Cruz, and as long as a Latino is riding along the fringe with the Tea Party then he/she will get elected in Texas, even in a GOP primary."

• "It's commonly said by Democrats and uninformed simple minded reporters that are too lazy to come up with any original ideas. How about as a question like this? Is the media biased and does it show when they ask stupid questions like this?"

• "Really? Republicans have led on having minority statewide electeds - Hispanic or otherwise. To imply that Republicans are anything other than accepting of all races is flat out wrong." 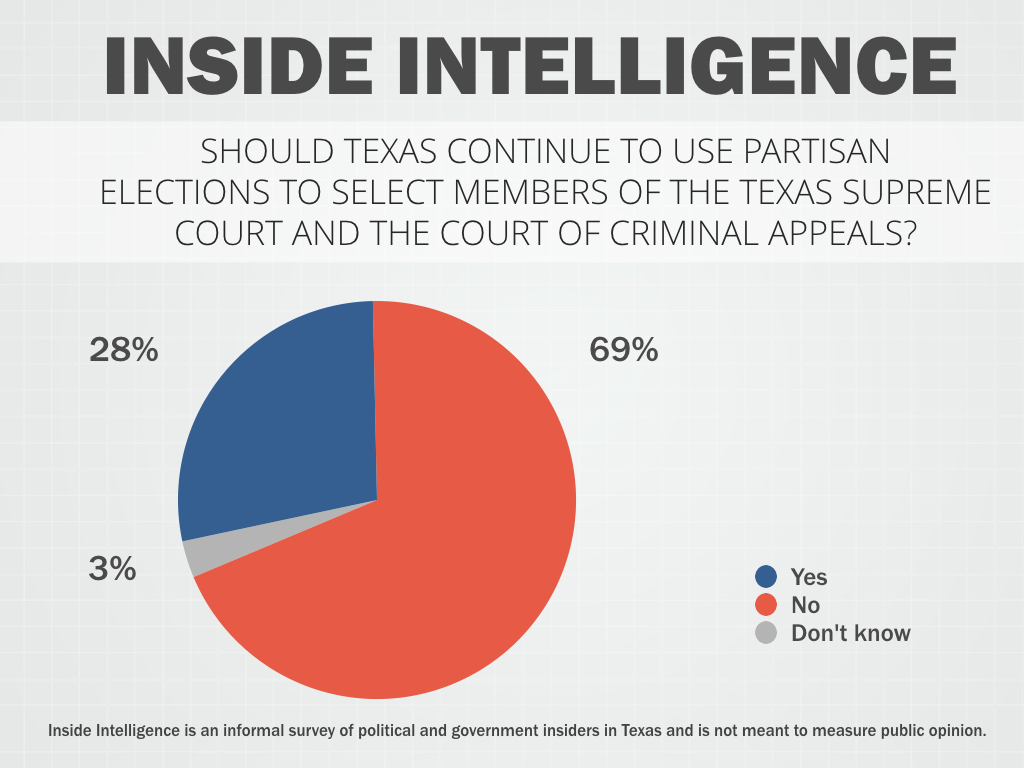 Should Texas continue to use partisan elections to select members of the Texas Supreme Court and the Court of Criminal Appeals?

• "A partisan elected judge is nothing more than an activist judge."

• "Even if they ran independently from the partisan elections, candidates would still run ads as 'Conservative' or 'Progressive.'"

• "Anyone who can take your liberty, money or, ultimately, your life should never be appointed to anything."

• "Texas courts are more accountable to the people because they're elected. Appointed — or appointed with retention elections — are NOT as successful for the electorate. Instead, they work for who appoints them, making their decisions POLITICAL, rather than PRINCIPLED."

• "All candidates should be required to file in both primaries. That will double the parties' filing fees, force candidates to run as judges and not politicians, and permit judges who win both primaries to end their campaigns in the Spring, when they are not susceptible to party 'sweeps.'"