LAREDO – The sirens, the crime-scene tape, the tears and agony belonged on the television screen in Martha Martinez’s living room.

Some of her favorite evenings were spent there with her sister Angelica — Angie, her siblings called her — watching "The First 48," a reality television show on which investigators scramble to solve murders within two days or risk the crimes going unsolved.

The sisters were “open diaries,” Martha Martinez recalled recently, best friends who kept tabs on each other daily.

In 2015, Angie Martinez had turned a corner at age 27. After earning her degree in criminal justice, she'd landed a steady job at the Webb County Jail. But more importantly, as far as her sisters were concerned, Angie had gained some independence and confidence. She had separated from her husband, Juan Francisco De Luna Vasquez, an undocumented immigrant from Nuevo Laredo, Tamaulipas, this Texas town’s sister city just across the Rio Grande.

“He used to control her so much — a lot,” Martha Martinez said. “She started to defend herself. But their lives were always very complicated.”

On the evening of July 2, Martha Martinez’s phone calls to Angie’s cell phone went unanswered. An hour later, she saw flashing police lights up close. Angelica Martinez had stopped by the central Laredo apartment she previously shared with De Luna to pick up their three children, ages nine, eight and three.

The kids were ordered outside and warned not to come back into the apartment, Martha Martinez recounted. Moments later the children said they heard their mother scream, and their father quickly packed them in his car and delivered them to a relative’s house.

Angie Martinez was found inside the apartment bludgeoned to death.

“When I got there, they wouldn’t let me go up, and that’s when a police officer told me that she had passed away,” said Martha Martinez, who drove to the scene after her mom told her Angie hadn’t shown up like she was supposed to. “And I had told him ‘No, it’s not her. She wouldn’t give up that easily.’”

Any hopes that her sister was still clinging to life were dashed when Martha realized there was no ambulance among the flashing lights. “I remember telling him to give her CPR, to call an ambulance. [I said,] ‘There’s no ambulance here – you need to call somebody.’ But she was already dead,” Martha Martinez recalled.

De Luna allegedly bashed in the side of Angie's head and strangled her, according to Laredo police. Beside her body they found a hand-written confession from De Luna, who was caught after he allegedly tried to commit suicide in an upper-middle class neighborhood where Martha Martinez said De Luna used to work as a handyman. He is now awaiting trial for the murder.

Martha and her older sister Kimberly Martinez don’t need TV cops to help solve the mystery of who killed their sister. They would still like someone to explain how a man with De Luna's lengthy criminal history could be living illegally in the United States.

By the time he was arrested in July 2015 for the Martinez murder, De Luna had been through the Webb County Jail at least four times on a half-dozen charges, according to Webb County Sheriff’s Department records. He had been caught illegally crossing the border under different aliases and sent back to Mexico four times, according to a statement the Department of Homeland Security issued after his murder arrest.

But it is unclear if federal immigration authorities were told about all of De Luna's crimes or whether any effort was made to detect his return to the United States.

De Luna was first arrested in January 2006, on an assault charge. That charge was dismissed, and De Luna was deported to Mexico later that month. In late June, the U.S. Border Patrol caught De Luna trying to come back in, and he was charged with improper entry by an alien, according to federal court documents.

But less than a week later, Webb County records show he was again picked up and charged with evading arrest, resisting arrest and making terroristic threats. Those charges were still pending when Angie Martinez was killed.

On July 3, 2006, a federal magistrate convicted De Luna of improper entry and ordered him deported and placed on unsupervised probation for three years. He was also ordered to pay a $10 fine, and he served no time in prison.

In 2010, De Luna was arrested after a warrant was issued for failing to show up to court on his earlier charges, according to Webb County Jail records. But he was out on the streets soon after.

Despite De Luna's arrest record, it’s unclear if federal authorities used any tools at their disposal — including prison time or threats of penalties — to delay or thwart De Luna’s repeated returns to Texas.

Immigration and Customs Enforcement referred all inquiries about federal interactions with De Luna to the U.S. Border Patrol. Agents with the U.S. Border Patrol's Laredo Sector said there is no record their office ever came across De Luna. A senior official for U.S. Customs and Border Protection’s public affairs office in Washington said the agency doesn’t release details about some deportees due to privacy concerns.

De Luna lived in Laredo enjoying his “fresa” lifestyle — a border term for Mexican socialites who enjoy, and often demand, the finer things society has to offer no matter their social standing, Martha and Kimberly Martinez said. His arrest history prevented him from gaining legal status but didn’t seem to affect his ability to live in Texas, working as a maintenance technician and handyman in the neighborhood where he was caught.

A few weeks before Thanksgiving 2013, De Luna was arrested again and charged with DWI and striking an object on a highway. With his previous assault and evading arrest charges still pending, he was booked into Webb County Jail for the fourth time. But he was soon on Texas streets again, bonding out the same day he was arrested after posting $2,500. Immigration and Customs Enforcement hasn’t responded to several requests asking if the agency took any actions to have De Luna transferred into their custody before he was released.

Armando Martinez, Angie’s father, said De Luna's 2013 arrest should have been the last straw for a “born criminal.” Had De Luna been locked up, or deported, his daughter might still be alive. 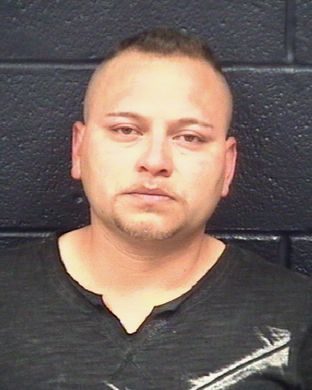 Enlarge
Juan Francisco De Luna Vasquez is charged with the 2015 murder of his estranged wife.

“Why didn’t the police or immigration go get him at his house?” he asked. “I never called the cops on him because I wanted to protect my daughter. But they should have gotten him. He’s nothing but a bandido.”

Angie Martinez was murdered in Laredo the day after a homeless undocumented immigrant in San Francisco allegedly shot and killed Kate Steinle. Steinle's death provoked national outrage, and state lawmakers often use it to highlight what they call the Obama administration’s “recklessness.” But no one at the state Capitol mentioned the Martinez case during interim committee hearings on border security.

The sisters aren’t sure why, but say it doesn’t seem to matter. They’re grappling with their own feelings about immigration — something they say they never really thought heavily about until their sister was killed.

“There’s a lot of illegal people here, right? But sometimes you come back because you need to work,” Martha said. “But what he did and how he lived his life, it does make you angry because he got in a lot of trouble with the law.”

Despite his confession, De Luna’s case remains pending in a Webb County court. During a court appearance Jan. 8, a judge set his trial date for May. Eduardo Peña, his court-appointed attorney, said his client’s guilt isn’t in doubt.

Cases like De Luna’s prove the border isn’t as sealed as some say. After being arrested, it’s only a matter of time before dangerous immigrants are back in Texas, Peña said.

“[Undocumented immigrants] are sometimes just given time served. It’s a merry go round,” he said. “Some are back in a day or two. It’s definitely a problem. It’s a race to post bond before ICE can detain them. There’s no question the border isn’t properly secured.”

It’s Peña's job to convince a jury the killing wasn’t premeditated but “a crime of passion” that could win De Luna a lesser sentence.

That would be a living nightmare for the Martinez family.

“After all the evidence and the autopsy, it’s more then enough to find him guilty and for him not to ever, ever come out. She didn’t deserve to die that way,” Martha said.