CIUDAD JUÁREZ — In the days leading up to Pope Francis’s scheduled arrival to this gritty industrial city once known as one of the world’s deadliest, the energy — and agendas – can’t go unnoticed.

For Jose González, it’s a chance to spotlight the need for immigration reform. For Jeff Katt, it’s an opportunity to tell people church and rosary beads aren’t necessarily the way to salvation.

And for Soledad Moreno, who works at a souvenir stand in the city’s marketplace, the visit is an opportunity to offer people a smile and a keepsake — and make a little money as she does it.

On the surface, the city seems to have successfully rebranded itself as an organized and friendly metropolis. The downtown entertainment sector has undergone an intense remodeling, and traffic projects in some of the city’s busiest parts are complete. Even some of the federales (federal cops) seem giddy and eager to talk to reporters, something that years ago seemed unfathomable as the police officers wore masks while on patrol and had their fingers locked on the triggers of their semi-automatic rifles.

But when Pope Francis leaves, the problems still facing thousands on both sides of the border will remain — and that’s what González, a Ciudad Juárez resident whose four sons are undocumented immigrants living in Denver, wanted people to know during a cross-border prayer Monday at the fence that separates the United States and Mexico.

“There are a lot of people on the other side that don’t have permission to come here [to see the Pope] and go back,” he said. “Yes, the visit should be political. He’s also here to bring peace to Juárez and El Paso. We’re neighbors.”

Some of those neighbors met on Monday in an impoverished neighborhood of Ciudad Juárez. They passed candies and money to each another from a chain-link fence under the watchful eyes of Mexican police south of the fence and U.S. Border Patrol agents north of it. They included Maria and Linda Rodriguez, who met for the first time in 28 years. Maria gave birth to Linda and couldn’t raise her, so she left her in the care of a relative who promised the child a better life in the United States.

“I’ve never had a chance to see her before today,” Maria Rodriguez, 62, said, holding back sobs as she grasped her daughter’s fingers through the fence.

But Linda’s relatives never took the necessary steps for the child to gain legal residence, and she’s now living in Texas as an undocumented immigrant.

“I don’t have a birth certificate I was never registered. I don’t have papers in Juárez and here no one can help me,” she said. “I clean houses for $7 an hour” in El Paso.

Maria Rodriguez said the Pope’s visit and the activism it has inspired had already resulted in something positive — the chance to reunite with her daughter who thought her mother was dead until recently.

“A lot of people need and want to see their families, and this [event], his visit, gives us a chance to see each other,” she said.

The event was organized by the Border Network for Human Rights. In a statement, the El Paso-based civil rights group said, “The historic and unique event of the Pope’s visit to our region will be harnessed to highlight the issues affecting immigrant families in the U.S. such as family separation, immigration raids, refugee and asylum processes [and] abuse of authority.”

Hours later in the city’s marketplace, Albuquerque resident Jeff Katt was spreading a different message. Katt passed out leaflets on scripture versus tradition and said his intent was to tell Catholics that believing what the Bible says about salvation is the only way to heaven.

“If they are thinking they are going to pray the rosary and that’s going to forgive them because of maybe what a man has said, then that’s not salvation,” he said. “The Bible is very clear that we’re saved by Jesus Christ alone, through faith alone. And it is scripture that is complete.”

Katt said he passes out the literature regularly in various cities but chose Ciudad Juárez this month because of the Pope’s visit. He said he wouldn’t attend the Mass because he sees no need as he is already saved.

When asked how Mexican Catholics, who hold the traditions of the Catholic church very close to their hearts, have received his message, he said the border town was one of the most welcoming he’s visited.

“Everybody is very kind and very respectful here," he said. 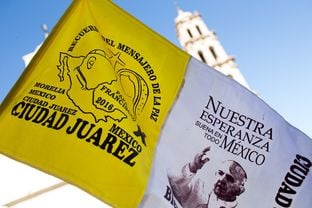 Enlargephoto by: Ivan Pierre Aguirre
Memorabilia of Pope Francis is sold in the center of town steps from the Cathedral on Monday, February 15, 2016, in Juarez, Chihuhahua .

For others like Moreno, the vendor at the city’s mercado, the visit is more simple. Moreno sells everything from belt buckles to purses and wallets at her simple stand by the downtown church. But lately she’s added some new merchandise — caps with the Pope’s silhouette stitched on the brim.

When asked if she thought it was OK to use the Pope’s visit to turn a profit, she simply said, “They are remembrances of his visit here, keepsakes.”

Then she added: “And also a way to make a little bit of money.”

Moreno said things have been slow. Despite the buzz around town, the peso was still very weak and the economy was still suffering.

On Monday morning, Jose Luis Marquez wondered, after the months of preparation, what the city would look like after the Pope left.

Marquez, who lives on the city’s outskirts miles away from the fairgrounds where the Pope will celebrate an outdoor Mass, said he doesn’t want to be critical. But he can’t help but wonder how city leaders will act after the Pope is gone.

“What I don’t like is how the city is fixing only the areas where he will travel. It’s only for him,” Marquez said. “They did this very quickly. But the rest of the city’s [infrastructure] has been in trouble for years. But yes, the visit is important.”