In all three state Supreme Court seats up for election this year, Republican incumbents face primary challengers on March 1 — but that's where the similarities end. Medical malpractice litigation dominates one race. A second pits two men named Green against each other. And the third features a two-time loser trying again to reach the state's highest civil court.

Supreme Court justices are elected at large. No Democrat has won a seat on the court since 1992, so the GOP primary effectively picks the winners. Here's the rundown: 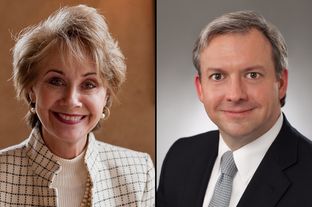 Incumbent Debra Lehrmann hopes to hold her Place 3 seat against challenger Michael Massengale, a judge on the Houston-based First Court of Appeals. Although they know it won’t excite most voters, their race centers largely on the court's handling of medical malpractice lawsuits.

Sweeping tort reforms adopted in 2003 — a cornerstone of former Gov. Rick Perry's "Texas Miracle" — limited when and how Texans can sue for medical malpractice and limited the damages they can recover.

Both candidates support the reforms, but they disagree over who's most committed to enforcing them.

“Tort reform has been a critical ingredient in the Texas Miracle — it’s kept the Texas economy strong,” Massengale said.

Massengale says Lehrmann's status as the only dissenting voice in medical malpractice rulings demonstrates that she “reaches beyond the text of the statutes,” calling her “an outlier on the issue.”

Lehrmann fervently denies these claims and says her goal is to apply the law correctly — “the opposite of judicial activism.” She said she dissents only when the Texas Medical Liability Act is being misconstrued — for example, when it’s applied to injured hospital employees who are entitled to worker’s compensation and who do not fall under the rules for medical malpractice lawsuits just because they work in health care.

“Are those kind of dissents against tort reform? I don’t think so,” Lehrmann said. Massengale “just kind of throws mud on the wall to see what will stick,” she added.

Ultimately, Lehrmann said, she hopes voters examine her record on the court when they head to the polls. “I’ve been doing this job for six years, and I’ve been doing a good job of it,” she said.

Massengale, meanwhile, said he hopes voters will be ready to parse both candidate’s judicial philosophies. He pointed to Texans for Lawsuit Reform and Perry, both of whom endorsed Lehrmann in 2010 — and both of whom are endorsing Massengale now.

“I hope they vote for the candidate who has the relevant experience and a clear vision of the appropriate role of the court,” he said. 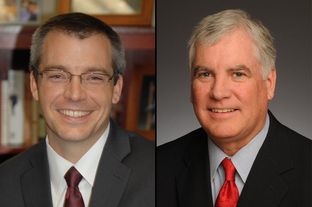 Paul Green, a two-term Supreme Court justice, would normally count on name recognition to give him the edge in his bid to keep his seat — but that tactic won’t work against his opponent, former state Rep. Rick Green.

“The whole ‘get your name out there’ strategy, that doesn’t work anymore,” Paul Green said. “Once you get the message out that there are two of them, then you’ve got to make sure people are voting for the right one.”

Rick Green, an attorney who represented Dripping Springs in the state house for four years before losing a re-election bid in 2002, said he thinks the matching names will force voters to pay closer attention.

The two Greens have few experiences in common. In addition to his time on the Supreme Court, Paul Green served on the Fourth Court of Appeals in San Antonio for a decade. Rick Green has never served as a judge but said he doesn’t see his lack of judicial experience as a problem.

"Thankfully, I have the advantage of bringing a variety of experiences to the court, rather than having all nine justices with nearly identical resumes," Rick Green said.

Those experiences include time spent with his family, traveling around the country to give lectures about America’s founding fathers. Rick Green also is the cohost of “Constitution ALIVE! The Citizen’s Guide,” an educational video series about the country’s origins. And he’s a regular speaker for WallBuilders, a powerful Tea Party organization based in Texas that calls for an increased role of religion in government.

Lectures about the Constitution aren’t a suitable substitute for a background in legal practice, Paul Green said. For him, the election comes down to experience.

“I’m not saying that everybody who goes on the Supreme Court has to have judicial experience, but I do think everybody ought to have some litigation experience — a substantial amount,” Paul Green said. “I think it’s a big jump to go from 'no experience' to serving on the highest court.”

Rick Green said he has enough experience to serve as a "Constitutional watchdog" — he says got in the race because of a record of  "judicial activism" by his opponent.

Rick Green pointed to a case last year in which a woman who had been married to her female partner in Massachusetts sought a divorce in Travis County. After the two women came to an agreement in trial court, the Attorney General's office sought to clarify that the trial court could not grant a divorce for a marriage it was not constitutionally allowed to recognize in the first place.

The Supreme Court of Texas ultimately ruled the state of Texas could not appeal the trial court's decree.

"The Supreme Court had very clear legal footing to uphold our Texas Constitution and the will of the Texas people, but the incumbent decided to pander to political pressure that wishes to erode our Texas values and constitution," Rick Green said.

"He uses that case to say I'm some sort of judicial activist, which is preposterous," Paul Green said. "He's revealing his inexperience. The case was not about gay marriage or gay divorce. It was a procedural case about jurisdiction."

“We would be going backwards if people like Rick Green are elected to the Supreme Court,” he added. 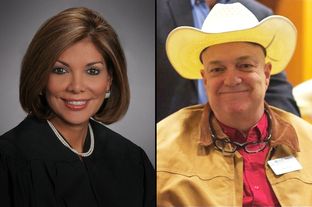 Although Joe Pool Jr. has already run for the state Supreme Court twice, unsuccessfully both times, he’s determined to try again — and this time, he’s set his sights on incumbent Justice Eva Guzman.

Guzman originally joined the court in 2009, after serving on both the Houston-based Fourteenth Court of Appeals and as a district court judge in Harris County. She boasts endorsements from a number of high-ranking Texas Republicans, including Gov. Greg Abbott, Lt. Gov. Dan Patrick, and former Gov. Rick Perry. And she earned the highest rate of approval in the State Bar of Texas’ judicial poll of candidates, earning the support of 65 percent of respondents for Place 9 (Pool earned 8 percent of the vote in the same poll).

Guzman’s widespread support has not deterred Pool, an attorney from Dripping Springs, from his long-term goal of making it onto the state’s highest court. Two years ago, Pool ran against Justice Jeff Brown and requested a court injunction to keep Brown off the ballot because of a number of alleged technicalities. When he was denied by a state district court judge, Pool appealed up to the court he was seeking to join, which also denied his request.

Voters should focus on Guzman’s strengths, she said — she’d rather not focus on Pool.

“I hope voters examine the records of the candidates and they make the right choice for Texas, which I believe, respectfully, is me,” Guzman said.

Pool, meanwhile, alleges the court regularly operates in violation of constitutional principles. By way of example, he cited the court’s recently issued guidelines for underage Texas women who are seeking abortions without their parents' consent. The guidelines, published in response to new legislation, significantly tighten the rules for minors seeking “judicial bypass,” making it more difficult for them to get permission.

Pool maintains the guidelines have the opposite effect.

“This is bait and switch, smoke and mirrors — the bottom line is, it’s unconstitutional to bypass parental consent,” he said. “They made it so your underage daughter can go hire an attorney and receive an abortion.”

But Guzman, who has been endorsed by a number of Texas anti-abortion organizations, said that characterization is fundamentally inaccurate and laughed out loud at the idea that the guidelines made it easier for underage women to procure abortions.

“The guidelines received praise from right-to-life organizations,” she said. “I’m not commenting beyond that.”