For this week’s nonscientific survey of insiders in government and politics, we asked about your thoughts on the Iowa caucuses.

Iowa's status as the first in the nation nominating contest is both a political tradition and the source of debate every four years. So we started by asking what the insiders thought of the Iowa caucuses.

The insiders were almost evenly split between describing the caucuses as a good initial tool to cull the field of presidential candidates (38 percent) and not representative enough of the nation to serve a valuable role (35 percent). The good news for the people of Iowa? Just 1 percent said the Iowa caucuses amount to a waste of time.

If Iowa isn't first, which state should be? We offered five alternative options. Ohio got the most support among the insiders with 30 percent, followed by Texas (23 percent), Florida (10 percent), Colorado (4 percent) and Illinois (2 percent). 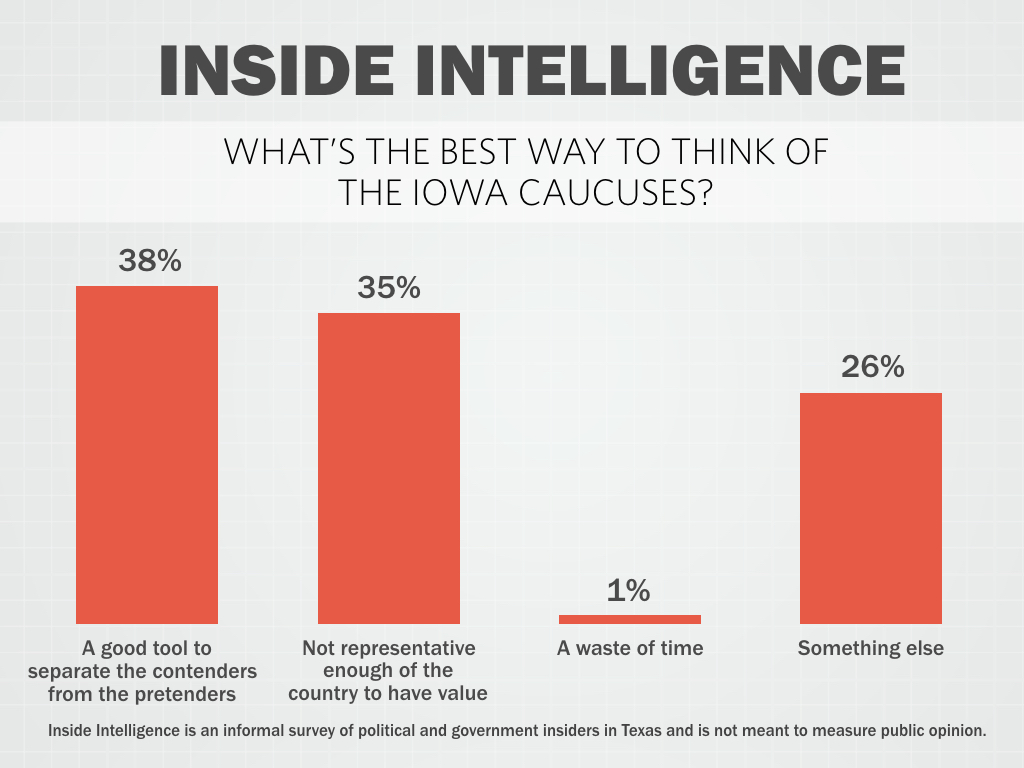 What’s the best way to think of the Iowa caucuses?

• "The Iowa caucus is a great tool to make America believe everyone campaigning for the presidency has a fair shot. The state is perfect for retail politics and perfect for those without a war chest. If Florida or Texas were the first states, those without a $40 MILLION war chest would've never launched a campaign."

• "An excellent way to raise much needed campaign cash both before and after the caucuses."

• "It's just a beginning. We have to start somewhere."

• "I don't know if it's a waste of time, but they definitely get more attention than necessary. At the end of the caucus, which was reported as an overwhelming victory for Cruz, he has eight delegate votes, Trump and Rubio each have seven. The nominee will need over 1200 delegate votes to secure the nomination. For the Democratic race, which is perceived to be the closer race, Clinton has 29 delegates and Sanders has 21. One of these candidates will need over 2,000 delegate votes."

• "It is what it is... tradition. About the same number of votes as you get in Harris County. But, hey, tradition." 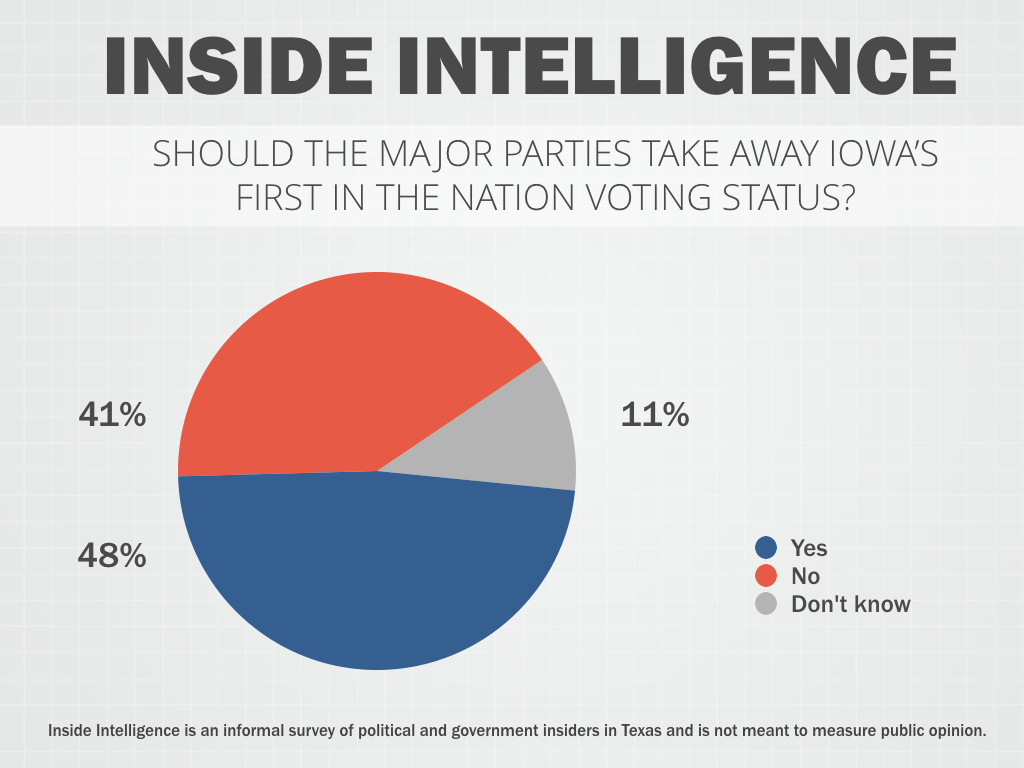 Would the major parties be wise to take away Iowa’s first in the nation voting status?

• "Iowa functions like a focus group for the country — voters there expect to see every candidate, ask them questions and see how they operate on turf that is completely foreign to media land. It allows the bases of both parties — the state has both an extremely right wing and an extremely left wing — to measure the candidates up close."

• "The sense that it doesn't matter which party you vote for, you get the same results, is palpable. It's wrong, of course, but people feel that Washington never changes, and for that reason, insurgents in both parties are strong."

• "Iowa's priority position is a odd remnant of the McGovern campaign. Let's try something rational, like a large representative state."

• "Would be hard to replicate the buzz factor elsewhere. But, still not very predictive of ultimate outcome."

• "Somebody has to go first. The process is valuable because it develops over time. If a fully 'representative' state went first, then the election would be over after one state, no?" 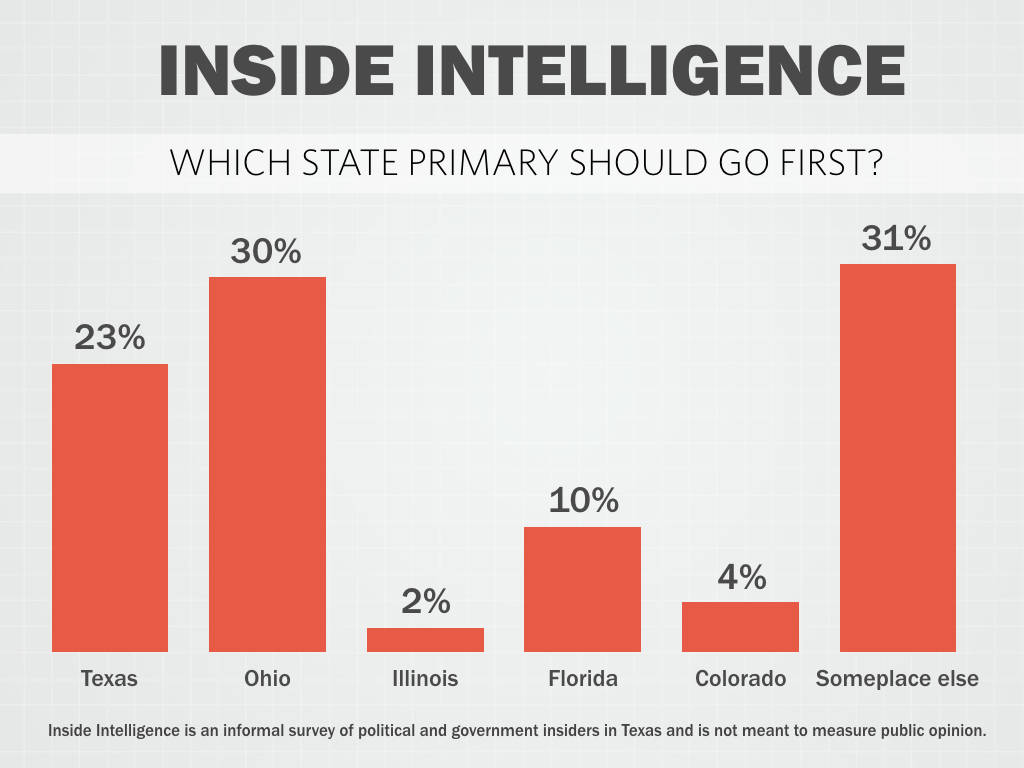 If you could choose which state primary/caucus goes first, it would be…

• "Hawaii. Because those poor campaign staffers trudging in the snow need a break."

• "Regional primaries with five or six regions of approximately equal population. The order of regions could be rotated or randomly shuffled every four years."

• "I read this week that Illinois and Pennsylvania are more reflective of U.S. demographics on race, religion, age, higher education and economic indices. And they are both swing states."

• "It shouldn't be one individual state, it should a few or at most a handful of states that represent various geographic regions of the country: southeast, west, northeast, and Midwest. Let's see how candidates manage resources and craft a message that appeals simultaneously to various parts of the country." 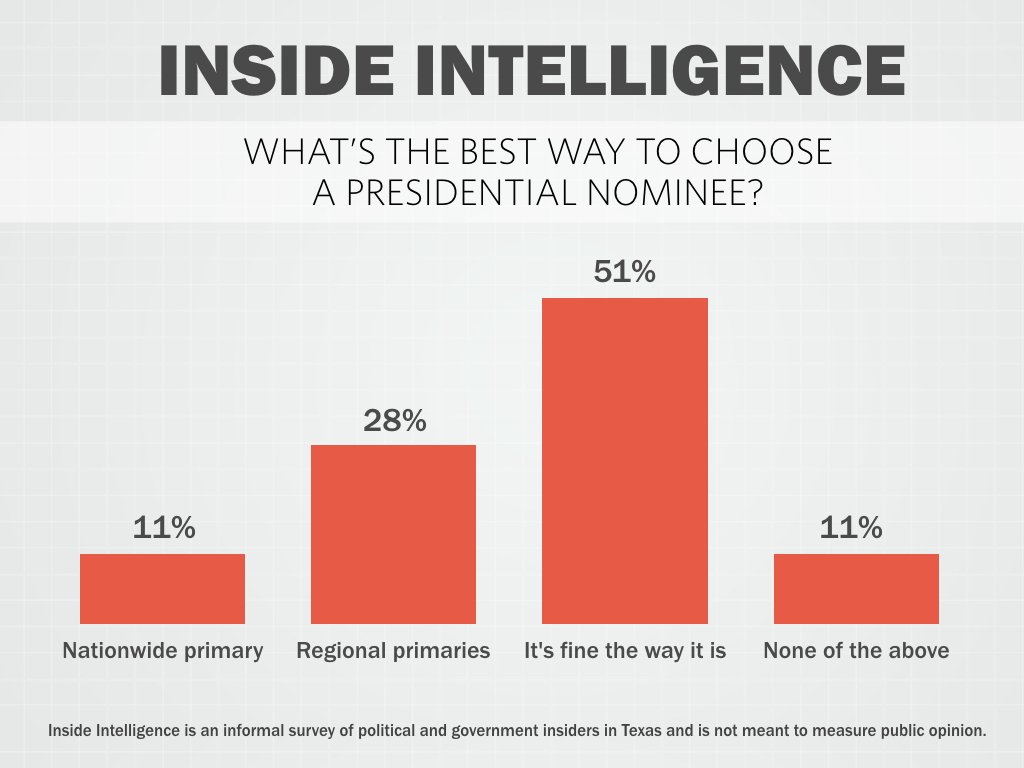 What’s the best way to choose a presidential nominee?

• "The national primary sounds good, but is impractical. It would take too much money and wouldn't allow for any real grassroots campaigning. The debates give the nation a chance to watch the process, but real campaigning has to be done state by state."

• "Choose the nominees by holding a series of elections in the major college football/basketball conferences. Say it out loud: The Big XII Primary. Has a nice ring to it."

• "This is a decision that should take a long time. This is a hard job. The American people need the opportunity to watch the candidates in action, watch them grow, see if they can handle it. If they can't manage a rough campaign, they really cannot handle the presidency."

• "Whatever system is utilized, retail one-on-one discussions between candidates and voters needs to be a significant part. A regional system or even a large state first in the nation approach would tend to favor the candidate with the best TV and paid messaging. Both parties need more connection between voters and their candidates and officeholders, not less."