Editor's note: This story has been updated with new statements from U.S. Customs & Border Protection and Joel Luna's lawyer.

In an unusual move, U.S. Immigration and Customs Enforcement has targeted the federal agent with a “detainer” — basically a civil arrest warrant filed against non-citizens — at the Cameron County jail. As a matter of law, ICE has no civil immigration enforcement authority to arrest or detain a U.S. citizen.

The detainer adds a surprising twist to a case that has already generated national headlines and focused attention on U.S. law enforcement corruption along the southern border.

Luna, two of his brothers and two other South Texas men have been indicted on capital murder and other charges stemming from the murder and beheading of a Honduran national, whose body was found during spring break last year near South Padre Island. Investigators say the men had ties to the powerful Gulf Cartel.

After Luna was arrested last year, the Cameron County sheriff's office said investigators found more than a kilo of cocaine, $90,000 in cash, firearms and Luna’s Border Patrol badge in a safe at the home of his mother-in-law.

The five men are scheduled to be arraigned in state district court in Brownsville on Wednesday. Garcia said Joel Luna will plead not guilty on all charges and ask for a jury trial.

Now a new wrinkle has emerged in this case: Luna has two birth certificates, one from Hidalgo County, Texas, the other from Reynosa, Mexico — right across the Rio Grande River.

ICE did not immediately return phone calls, but Luna’s lawyer, Carlos A. Garcia, said he has no doubt that his client is a U.S. citizen, an ironclad requirement for employment as a Border Patrol agent. Garcia also denied a statement from U.S. Customs & Border Protection asserting that Luna had been "arrested on False Claim To United States Citizenship" on Nov. 12, when the agent was already in state custody in South Texas.

He said any federal arrest would trigger an appearance before a magistrate within 48 hours and notification to him as Luna's lawyer — and "none of that occurred," Garcia told the Tribune.

“He worked for the federal government. No one had ever questioned his citizenship before — until his arrest,” Garcia said. “I don’t put much value in whoever it was that made that determination. You have one person that decided that, you know what, this is worth a second look.”

Garcia said Luna attended elementary school in Mexico, which has stiff paperwork requirements for children who want to enter the public school system there. He said it’s not uncommon for parents or other relatives to fraudulently obtain Mexican birth certificates.

“Mexicans who live along the border can purchase a birth certificate by just showing up one day and saying, 'Hey, my kid was born on this date in this place,'” he said. 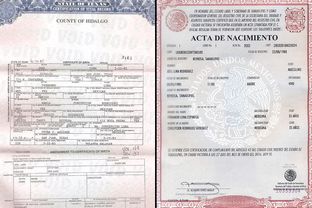 “I don’t know whether or not my client has Mexican citizenship per se, but there is a Mexican birth certificate out there,” Garcia said. "He left Mexico a long, long time ago when he was very young. It’s unfortunate that we have this little wrinkle, but it's there."

It's at least the second recent case involving a federal border agent holding both Mexican and U.S. birth certificates. In another case of alleged law enforcement corruption at the border, the Monitor newspaper of McAllen reported Tuesday that a Customs and Border Protection agent accused of taking a bribe also has competing birth claims on both sides of the border.