For this week’s nonscientific survey of insiders in government and politics, we asked about your expectations on turnout in the primaries.

We began by asking how Republican turnout this year will compare to the nearly 1.5 million voters who turned out for the delayed GOP primaries of 2012, the last presidential election year.

With the next question, we asked how the number of voters choosing to vote early would compare to recent elections. Close to three in five of the insiders thought early voting would count for between 50 and 55 percent of the total vote, or within the historic norm.

If Republicans turn out in higher than normal numbers, 49 percent of the insiders thought it would favor Donald Trump while 41 percent thought Ted Cruz would be the beneficiary.

We also asked whether Democrats might turn out in higher numbers because of the energy on the Republican side and the energy being generated by their own presidential candidates. The near consensus pick here was that turnout would not surpass 1.5 million, with 47 percent of the insiders saying that between 1 million and 1.5 million would vote and another 42 percent saying that turnout would not exceed 1 million.

We decided to have a little fun with the last question by asking whose endorsement would bring in the most votes. In addition to the usual suspects from the political realm (Rick Perry, Sarah Palin) and the conservative media (Glenn Beck), we tossed in a couple of left field picks. Those include members of the Robertson family, whose reality TV series "Duck Dynasty" has made them influential in GOP primary politics.

We also threw in Killer Mike, the Atlanta, Ga.-based rap artist whose conversations with Bernie Sanders have gone viral online.

About a third of the insiders tabbed the Duck Dynasty clan as having the most influence among voters this year. They were followed by Beck (25 percent), Perry (20 percent) and Palin (17 percent) with Killer Mike bringing up the rear with 5 percent. 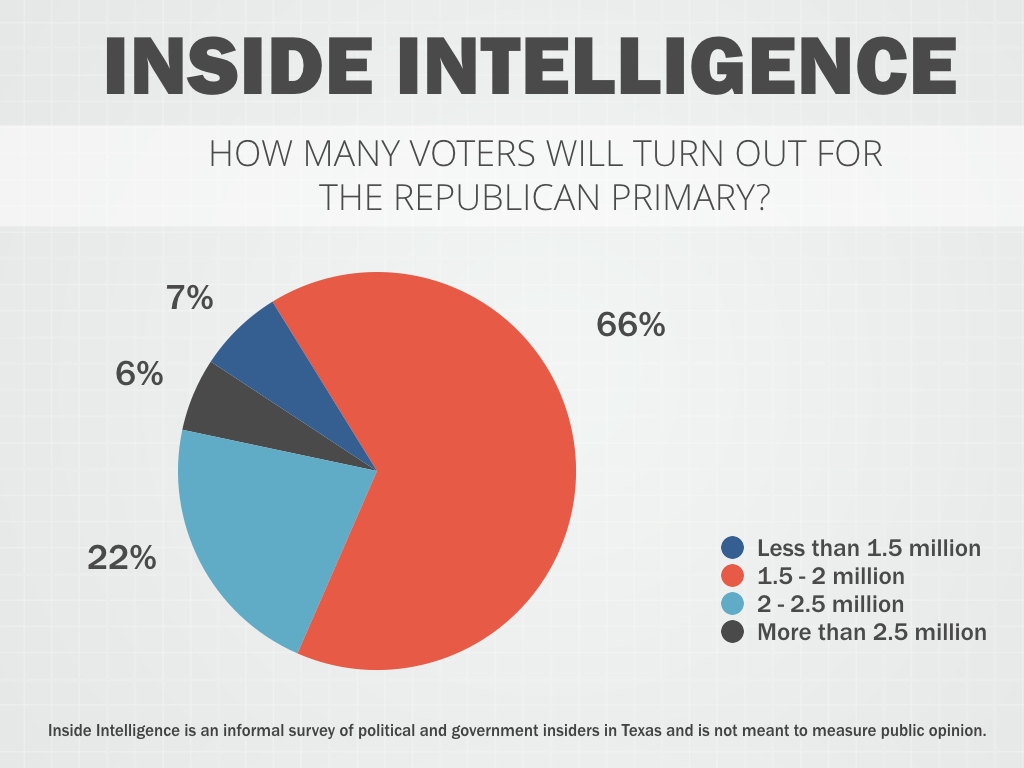 In 2012, nearly 1.5 million Texas Republicans voted in the presidential primary. How will turnout this year compare to that?

• "There's blood in the water and the sharks are hungry. Eight years of crumbs make people do crazy things like vote."

• "With a still contested race by the time our primary rolls around and actual delegates up for grabs, you can expect more interest and turnout by Republican primary voters. But here's the better question: will those additional Republican voters be tea party hard-liners or traditional GOPers?"

• "Obviously Texas is a must-win state for Cruz, but Bush will expect to be competitive here and Trump's appeal to non-traditional or non-frequent voters will likely drag the number higher — especially considering that 2012 primary votes were cast in late May, not on the historical primary date." 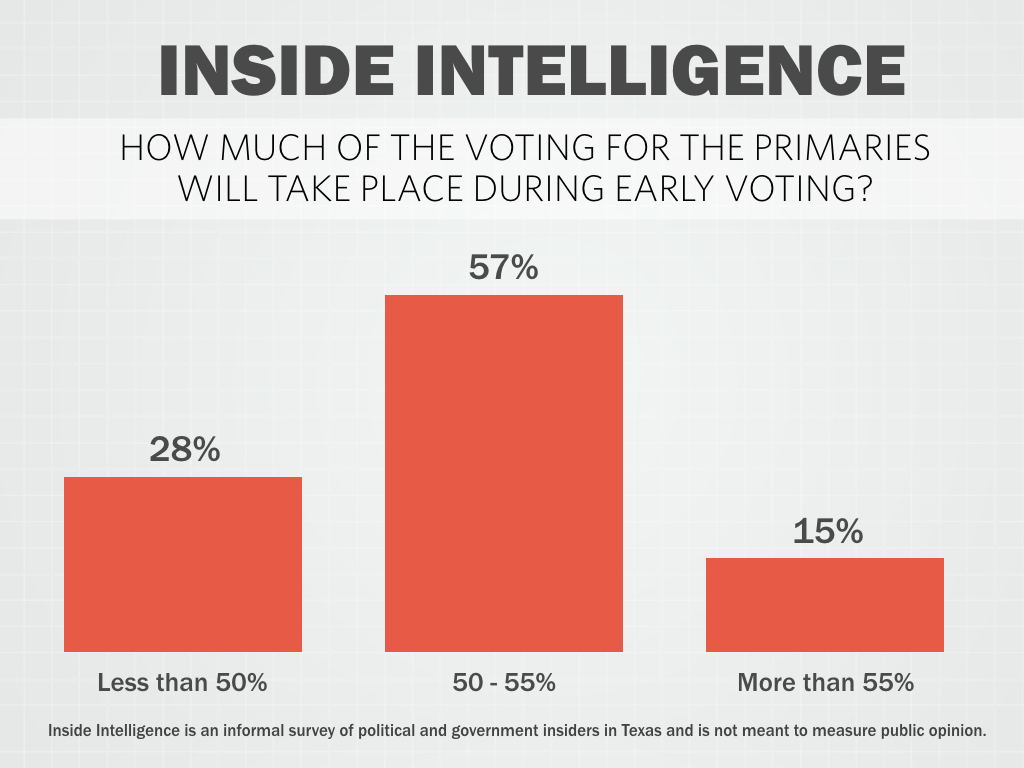 How much of the voting for the primaries will take place during early voting?

• "We have gotten really, really good at GOTV and old folks continue to vote by mail."

• "There's gonna a lot of first-time voters who don't know about early voting so Election Day is going to see a big surge."

• "Both EV and mail-ins from 65+ have been trending up since at least '04 and that trend will continue and eclipse the '14 Primary and General."

• "If you are voting in a primary you are likely driven by top of the ticket races and, therefore, not unsure of your choice. This means voting early is more probable in a presidential election. Republican primary voters will represent a larger number during early voting than will Democrats who are traditionally election day voters."

• "Things are going to be very fluid, so folks will wait to make up their minds." 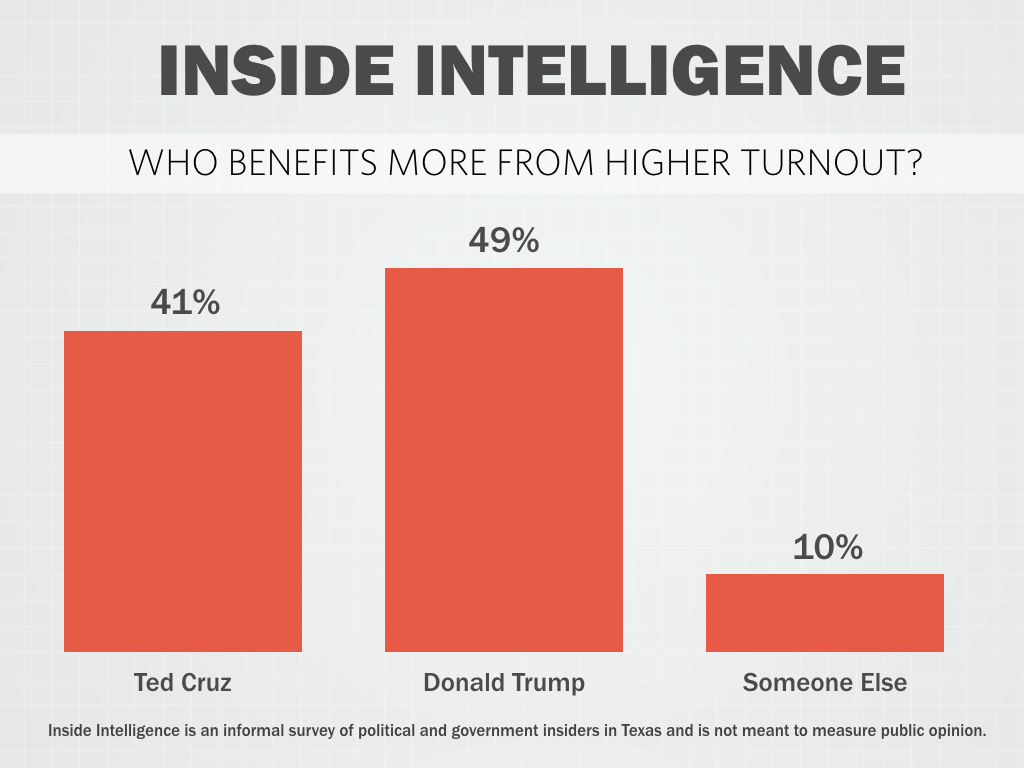 Who benefits more from higher turnout?

• "Depends on how many Texans are 'angry' and siding with Trump."

• "Any of the rational Republicans would see some benefit, but it won't be high enough to matter. Cruz runs away with it."

• "Who knows? Three months ago, I would have said Bush. But now? Higher turnout probably means that Trump will get still even more votes. Must be a satisfying feeling thinking you can gun down anyone you want and still get elected President. Hell, even Aaron Burr couldn't do that."

• "Higher turnout means that more non-traditional voters showed up, and at this point we must assume they aren't showing up to vote for Bush."

• "Rubio and Bush also benefit from a higher turnout. A much younger voter will come out." 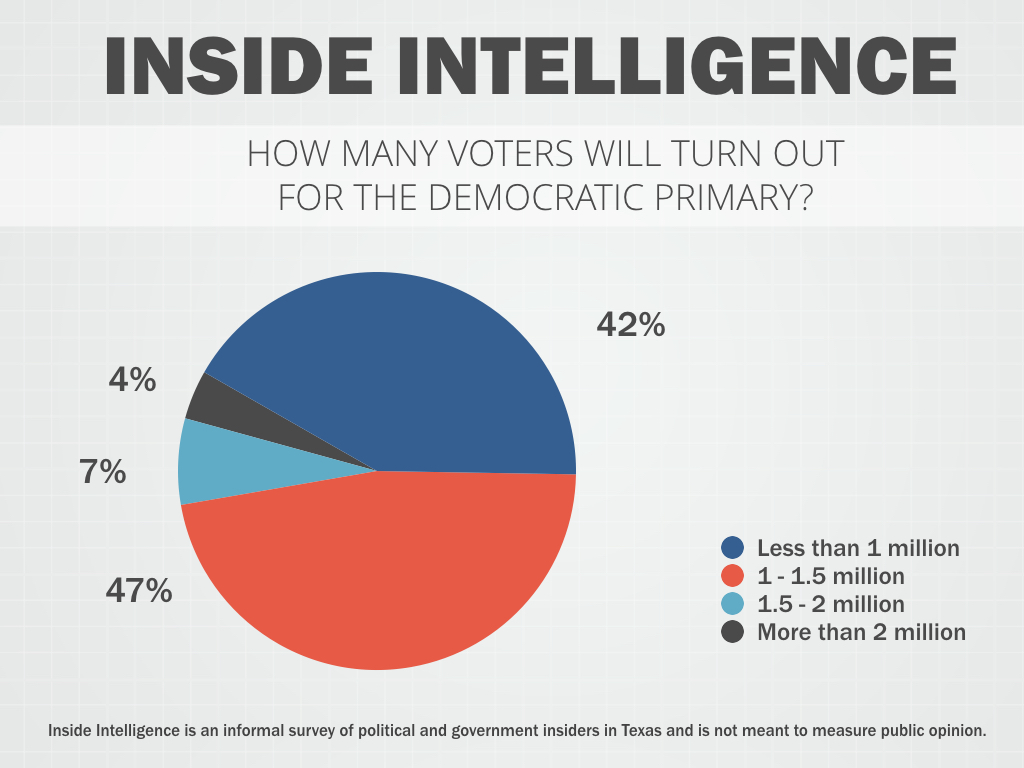 In 2008, increased interest in the Democratic primary battle between Hillary Clinton and Barack Obama also increased turnout on the Republican side. What will turnout be among Democrats this year?

• "Texans typically don't like to feel the burn, unless it's from chips and salsa."

• "Dems will also get a healthy turnout."

• "Hillary will spend a ton on the ground in SoTx, RGV, and urban African American communities. In these communities, voting will normally begat voting which should push our number through the stratosphere approaching 2008 numbers in those communities."

• "Bernie is kicking Clinton's can all over the road she's more scared than a mouse in a room filled with cats. They will both drive up turnout."

• "Democrats have a losing message — and they keep trying to fix it with some new thing — this time it's the first woman — which, didn't work for Wendy Davis, of course. It's not who is saying it, it is what they are saying that keeps potential Democratic voters at home." 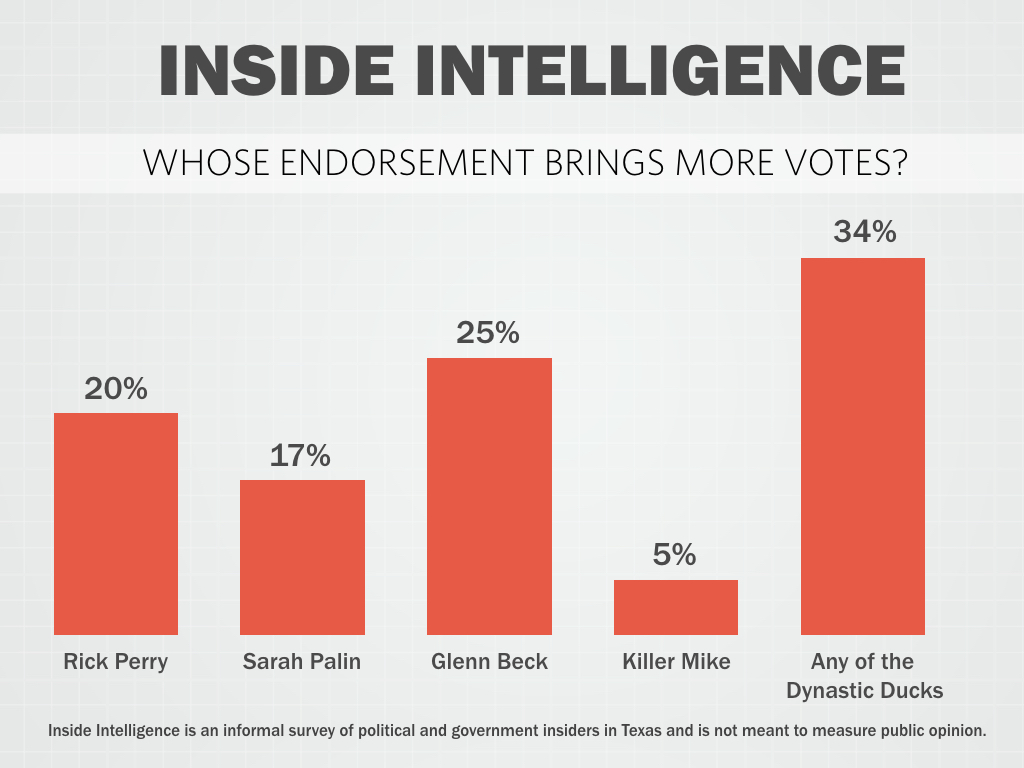 • "The only endorsements that would translate into votes would be Billy Graham or the Pope."

• "You accidentally left Genghis Kahn and Reagan off the list. And Jesus Christ. Oversight, I'm sure."

• "In reality, in terms of moving the needle in a substantive way, the right answer is 'none of the above.'"

• "How much do endorsement really matter anymore. Not much. They can be bought. Think Houston and Hotze."

• "Run the Jewels making a political statement (FYI, Killer Mike is an activist rapper given that a good 90 percent of readers will have no idea who he is but their kids will)!"