For this week’s nonscientific survey of insiders in government and politics, we asked about the immediate future of gambling in Texas.

Gambling keeps generating headlines whether it's the escalating fight over the legality of fantasy sports betting or the ongoing conflict between lawmakers and the Texas Racing Commission.

We first asked whether persistently low oil prices heighten the odds past 50-50 that lawmakers will look favorably on an expansion of gambling in order to capture more revenue without having to raise taxes. On this question, the insiders were nearly unanimous in saying lawmakers are not changing their minds anytime soon on the issue.

We then asked if the Racing Commission would avoid being shut down over its showdown with Republican lawmakers over the agency's introduction of betting on historical races on machines that often resemble slots. Just about half of the insiders thought the commission would survive with another third saying that the commission is on its last legs.

On the final question, we quizzed the insiders on whether the state's racetracks can survive without being able to offer new gaming options such as the aforementioned historical racing machines. On this one, more than three in five thought the tracks can't make it without being able to offer something new to their patrons. Just 15 percent thought the tracks could survive. 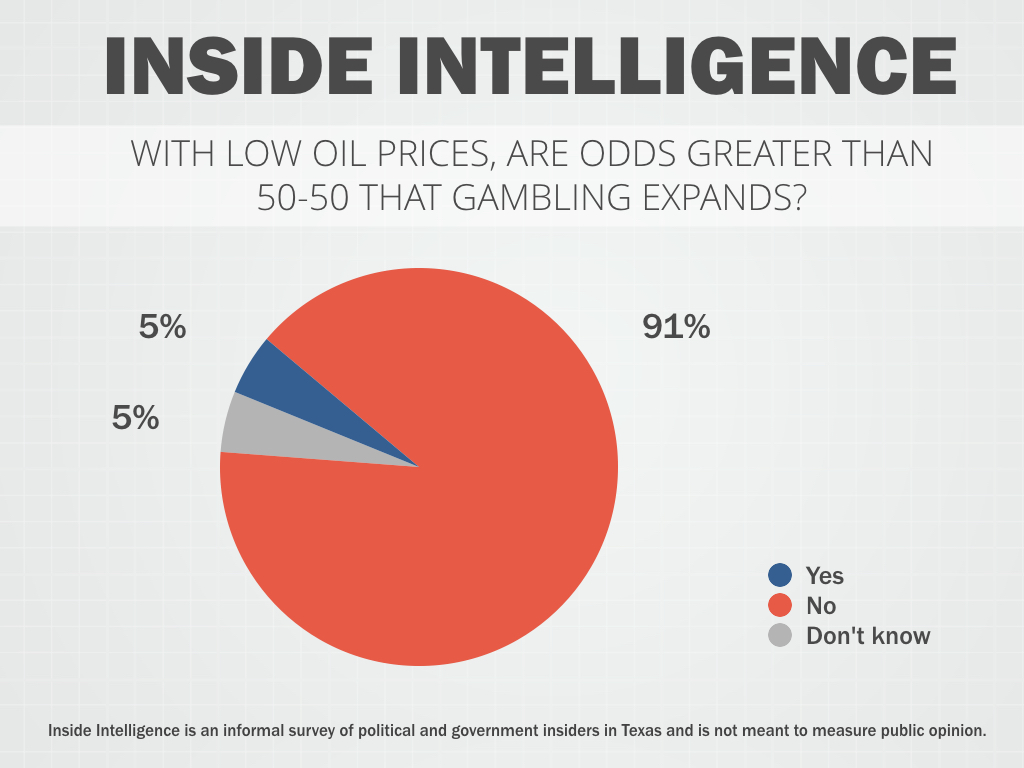 Does the impact of the low price of oil on state revenues make the odds greater than 50-50 that the Legislature expands the footprint of gambling in Texas?

• "Too many social conservatives in the Lege to go for gambling. But too many conservatives of all kinds (including Ds) to raise taxes, which is what needs to happen. Even though this is the perfect time to raise the gasoline tax — gas would still be cheap, voters are fed up with congestion."

• "The low price of oil hurts all of Texas, especially at the local governmental level such as far lower school tax revenues, but it will NOT change the politics on gambling."

• "The economic argument for gambling has never held sway in the Capitol, where the opposition is moral, not material. Weak oil prices don't change that equation."

• "Not 50-50 but moves it closer and makes the chances of cutting a deal on it greater. Still too many strong voices in the Lege who are against gambling. However, this all becomes irrelevant if oil is back over $40 a barrel. A year in the life of oil prices is a long time, my friend. What happens with Iran's oil supply? How much pain can Saudi Arabia continue to sustain? That is one of the keys. Wow, Saudi Arabia's oil impacting chances of gambling in Texas? Perhaps."

• "That's a revenue-focused question; the reason for gambling will be a spending requirement." 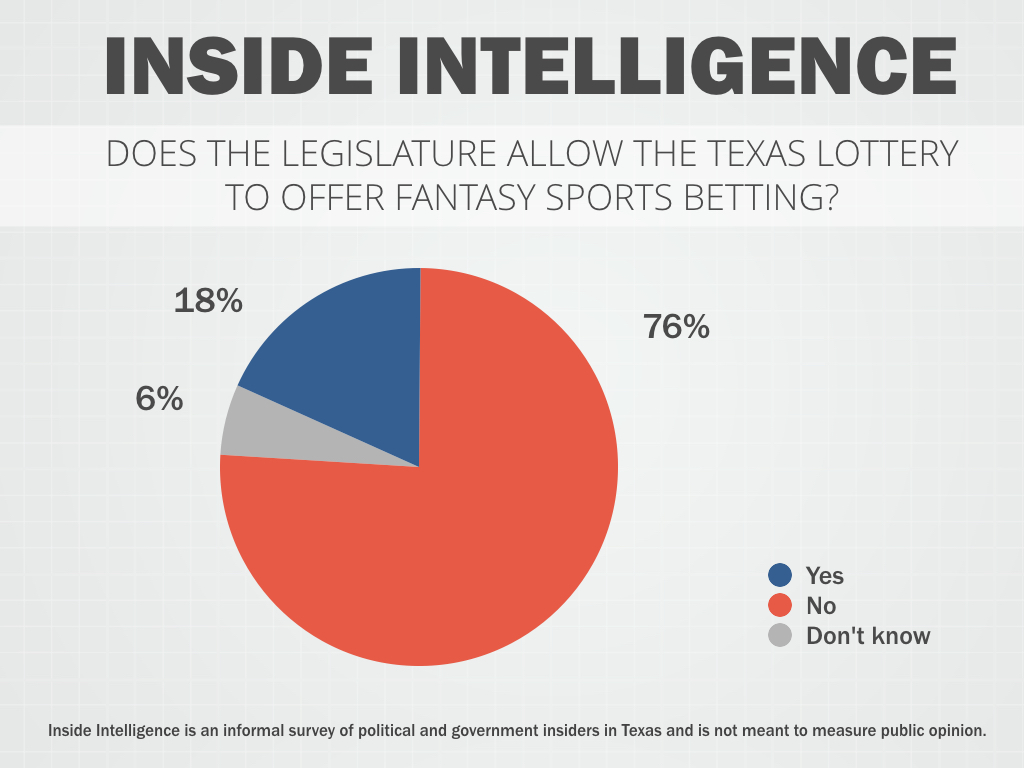 Will the Legislature end up authorizing the Texas Lottery to offer fantasy sports betting?

• "Even Nevada calls it gambling."

• "The Republican controlled Legislature/executive will not increase the footprint of gambling no matter who the big money interests are from Texas."

• "You mean so the Lottery can provide all the money for education, like it is now?"

• "No. Remember it was only two sessions ago that the House voted to REPEAL the lottery entirely. They ain't votin' to expand nothin' where gambling is concerned."

• "Camel's nose under the tent for casino gambling." 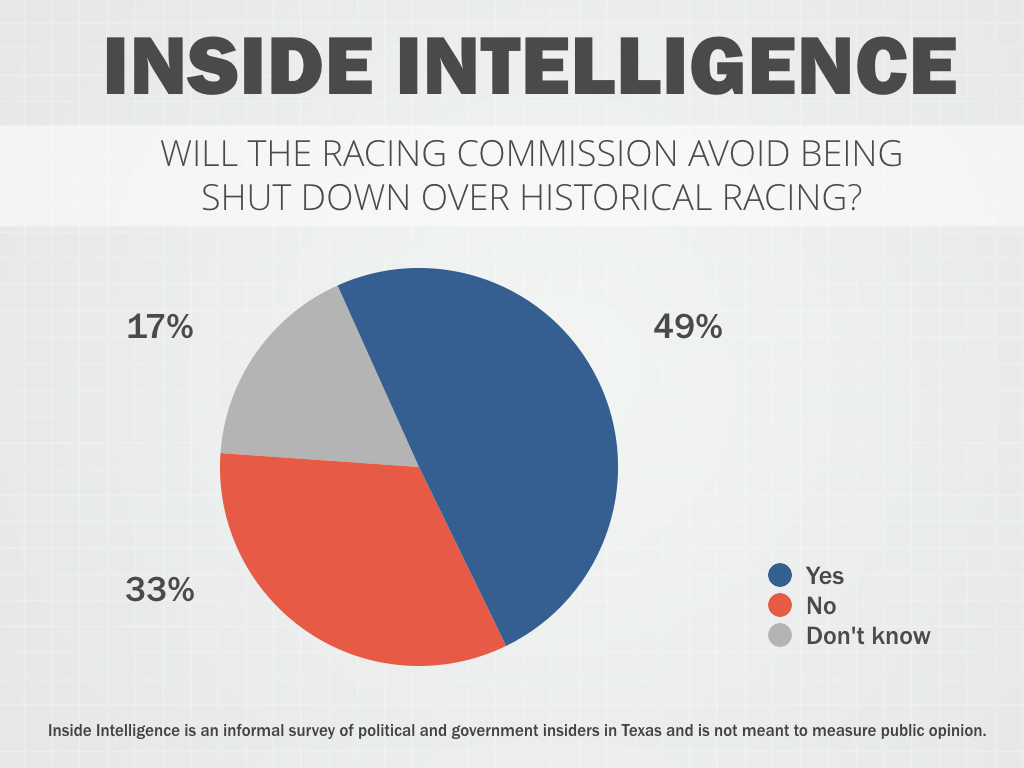 Will the Racing Commission avoid being shut down over historical racing?

• "Can't avoid the shutdown. Quit being about historical racing and more about who could pee the furthest a long time ago."

• "But, they may be shut down because they picked a fight they couldn't win and pissed off the Chairwoman of Senate Finance."

• "Lots of talk and threats, scares and whatnots, but ultimately, things are likely to go on as before. yawn"

• "Please, a government agency closing down? What kind of hallucinogens are you taking?" 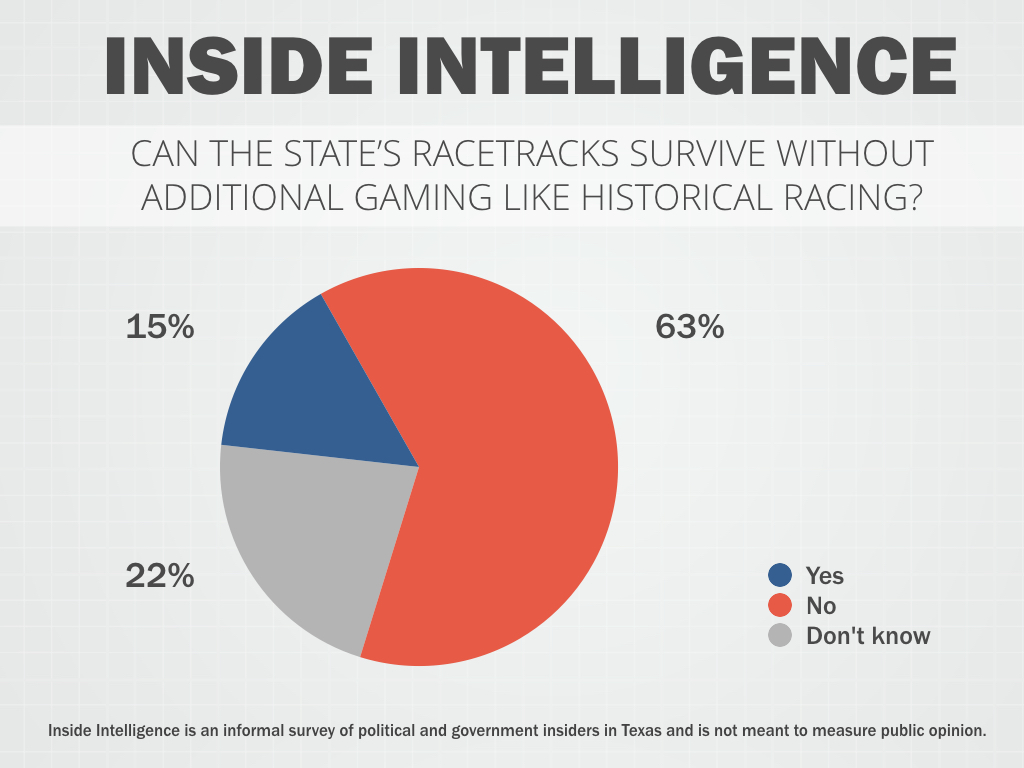 Can the state's racetracks survive without additional gaming options like historical racing?

• "It's a dying industry across the country but especially in Texas. Without additional options to bring in revenue, it's only a matter of time before the tracks shut down."

• "No, but no one cares... they have never paid their own way. They opened based on a bet that they could get slots, but then got real greedy when they wanted to be grandfathered in for their locations being casinos... fought competitive bidding. 'Pigs get fat, hogs get slaughtered.'"

• "If they can't survive without slot machines, then let them close. Why do we need racetracks anyway?"

• "It is a matter of time before they all close. This will have a detrimental impact on rural Texas, which has lost what little manufacturing that existed. There won't be a real demand to raise and train horses in Texas. Kentucky already has the market and we will give them the last vestiges of the racing industry."

• "Yes, if you call endless subsidies from the track owners 'surviving.' Tracks hang on year after year, losing money, only because of the distant hope that one day, the tracks will get expanded gambling. The owners will hang on at least a few more years because of this dream."