Less than a month before New Hampshire's first-in-the-nation primary, Davis' stumping for Democratic presidential hopeful Hillary Clinton has taken on a new urgency: Her candidate is increasingly viewed as the underdog here in New Hampshire, falling behind Bernie Sanders, the U.S. senator from Vermont.

Davis' message to the Clinton faithful is that a loss in New Hampshire would by no means be fatal.

These are the people who knock on doors and phone bank for Clinton, and they are increasingly spooked by the passion on the ground in support of Sanders.

It is a far different vibe than Davis' December trip to Iowa, where at the time, Clinton had a more stable lead. But polls tightened there, and some show Sanders in the lead in New Hampshire. Sanders signs blanket the snow-covered New Hampshire landscape, and Clinton phone bankers tell frustrated stories of stubbornly loyal Sanders backers.

Clinton and her campaign are in danger of losing both New Hampshire and Iowa, the first state to host a contest. Neither are likely to be mortal blows to her presidential bid. But with memories of Clinton's loss to President Obama in 2008, nerves are becoming raw in the Granite State.

But Davis is a sea of calm. 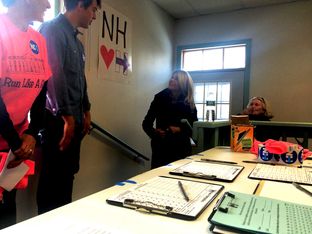 “I know why her campaign, obviously, wouldn’t want to start out losing a couple of states, but in the grand scheme of things and the overall picture of the delegates, I am absolutely confident that Hillary is going to take it away,” she added.

Campaigning for another politician is a soft re-entry to politics for Davis, since Texas’ then-Attorney General Greg Abbott soundly beat her in the 2014 gubernatorial race.

Davis lingered at campaign events for photos and conversations with staffers and volunteers. At one point, she posed with a cardboard standup of Hillary Clinton.

“It’s been kind of fun to know that I have an opportunity to demonstrate that there’s a different voice and a different way of thinking coming out of Texas,” Davis said of the crossing of paths.

Davis said she plans to campaign for Clinton soon in Nevada and South Carolina. Asked if her travel hinted at an appointment in a would-be Clinton administration, she said it wasn’t on her mind.

She’s not so certain about Sanders.

At another stop in Peterborough, a hamlet not far from the Massachusetts state line, Davis agreed with a woman who declared, “In New England, Bernie Sanders comes across one way. In Ohio, I cannot imagine a possibility where he can win a general election.”

Davis used her outsider status to inject self-awareness into the Clinton supporters about how a self-described Democratic socialist would play in the South.

“It’s something I’ve heard twice already,” she said of Sanders’ liberal image, “this idea that while there might be a particular perspective, a unique perspective, that people in New England might have about the record and candidacy of Bernie Sanders, that that reflection may not be what we see across the United States.”

Despite her 2014 loss, Davis remains a hero to many women across the country that support abortion rights.

She is a celebrity who can turn out dozens of skittish New Hampshire Clinton loyalists on a federal holiday when many businesses are closed due to weather. In fact, the Clinton volunteer who drove her to Peterborough mildly wrecked a sedan trying to get through the ice.

Davis gamely climbed out of the car and negotiated a slippery hill to the event, while expressing cross words with herself for not remembering to bring more snow-appropriate shoes.

Beth Lindstrom was one of the mostly baby boomer-aged women at that event. She said she spends so much time canvassing for Clinton amid icy walks and sub-freezing wind that she often retreats to her car when her hands turn numb. Davis, she said, motivated her to keep going in the final stretch.

But Lindstrom was distressed that young women — a key group of Davis followers — are siding with Sanders.

“I think so many aren’t aware of how what we have today was [because of] how hard the fight was to get those rights,” she said. “I think mothers failed to point that out to them, and I think just as time goes on, it just fades a bit.”

In an interview, Davis called the concerns over millennial women “overblown.”

“We won’t really know what that enthusiasm looks like and how it evidences itself, obviously, until the caucuses in Iowa and the primary here,” she said.

Michael Schuman is a registered Democrat who listened to Davis speak in Keene with his young adult daughter.

But even Davis couldn’t convince him commit to Clinton.

“That’s a good question. I don’t know,” he said, when asked if Davis could staunch the passion behind Sanders among young voters, including women.

“I don’t know if Wendy Davis or anyone can.”