For this week’s nonscientific survey of insiders in government and politics, we asked about your 2016 legislative and statewide office predictions.

The insiders by contrast were bearish on the chances of the tea party incumbents winning their primaries. They were most pessimistic about Jonathan Stickland and Molly White, with just 19 percent predicting a primary win for each. Another 26 percent picked Tony Tinderholt to win and 34 percent picked Matt Rinaldi to win.

We shifted with the next questions to quiz the insiders on who they thought would make the runoff in several key multi-candidate GOP primaries.

In the case of the seven-candidate contest for the open Railroad Commission seat, the insiders favored Wayne Christian (75 percent), John Greytok (48 percent) and Gary Gates (47 percent) as the ones most likely to advance to the next round. No other candidate was picked by more than 10 percent of the insiders.

In the race to fill the open Senate District 1 seat vacated by Tyler Republican Kevin Eltife, the insiders clearly favored Bryan Hughes (90 percent) and David Simpson (63 percent) to make the runoff. James "Red" Brown was mentioned by 21 percent. Interestingly, 14 percent thought the race would be won without a runoff.

Finally, in the race to fill the open Senate District 24 seat vacated by Horseshoe Bay Republican Troy Fraser, the insiders clearly preferred Dawn Buckingham (69 percent) and Susan King (64 percent) to make the runoff. Brent Mayes was named by 27 percent and Jon Cobb was named by 13 percent. 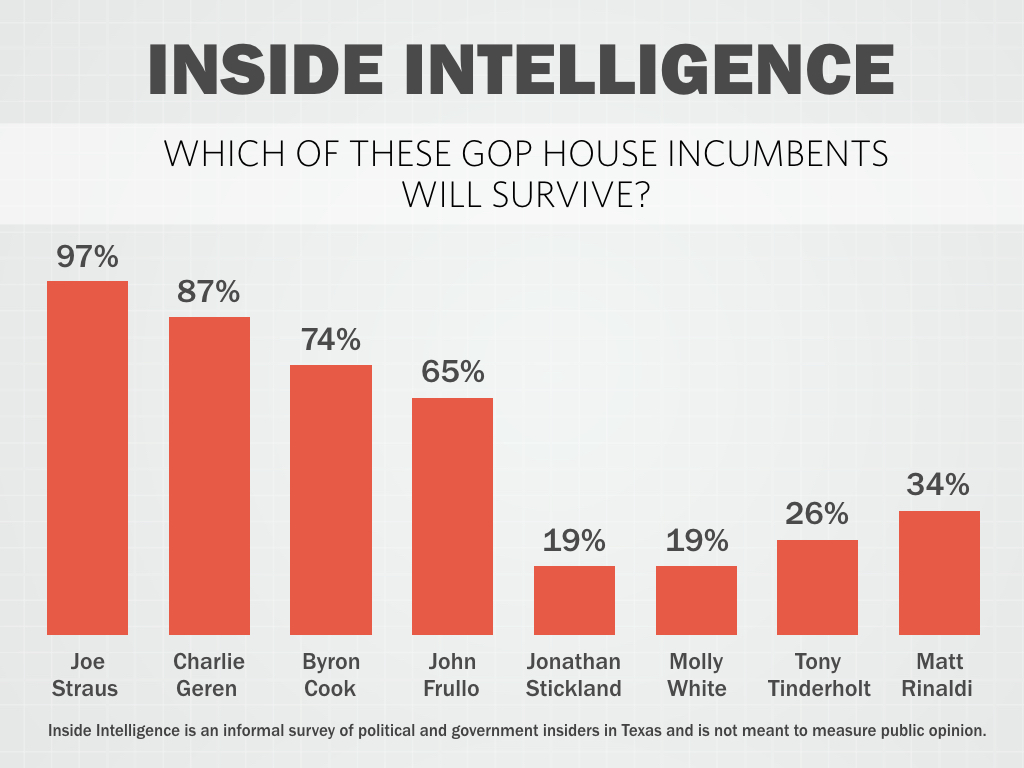 Which of these GOP House incumbents will survive?

• "You're pandering to the right by including Speaker Straus on the list. 100 Empower Texas candidates can run against him and he will still beat them without a runoff."

• "Watch out for Crazy Town, USA... aka DFW. That area bodes extremely well this cycle for the Tea Party types and very, very poorly for those who are not."

• "Molly White, Tony Tinderholt and Rinaldi have no real opposition outside Austin — the Lobby doesn't like 'em. Cook and Geren will survive because their opponents are weak — so the establishment and the right wingers will split — Stickland and Frullo won't be back."

• "Most incumbents survive because the 84th Texas Legislature was the most conservative in history, according to Dan Patrick and Greg Abbott. Messaging will be the key."

• "Sadly, a few who should be changing pins at a bowling alley will remain." 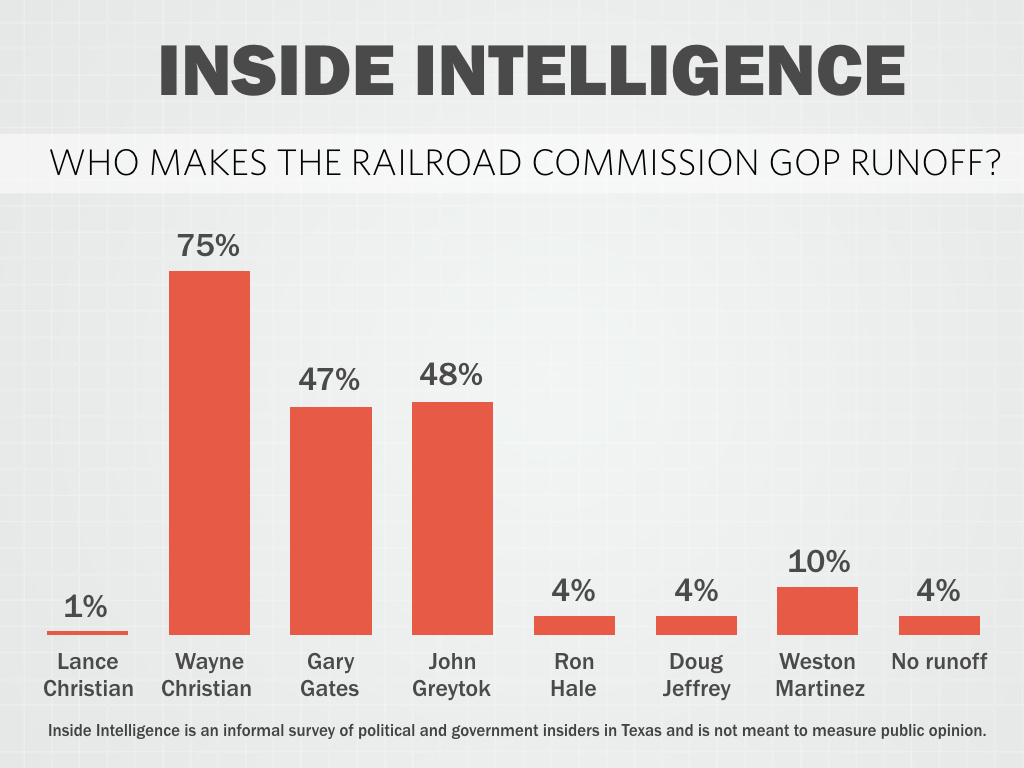 Which two candidates make the runoff in the open Railroad Commission GOP primary?

• "There is only one candidate in this race because they genuinely want the job and will take it seriously and that's John Greytok. Most of the others are perennial candidates or wannabes in search for an office."

• "Gates spends the most (mailers and radio already!?) to get in, and the Christians confuse people, and Martinez learns The Carrillo Lesson of Hispanic names on down ballot races."

• "Wayne Christian makes it because he already has name recognition statewide from his recent run for RRC. He probably won't win it without a runoff because of confusion that will occur with the other candidate with the surname Christian."

• "Have absolutely no idea. There isn't a significant candidate with any name ID." 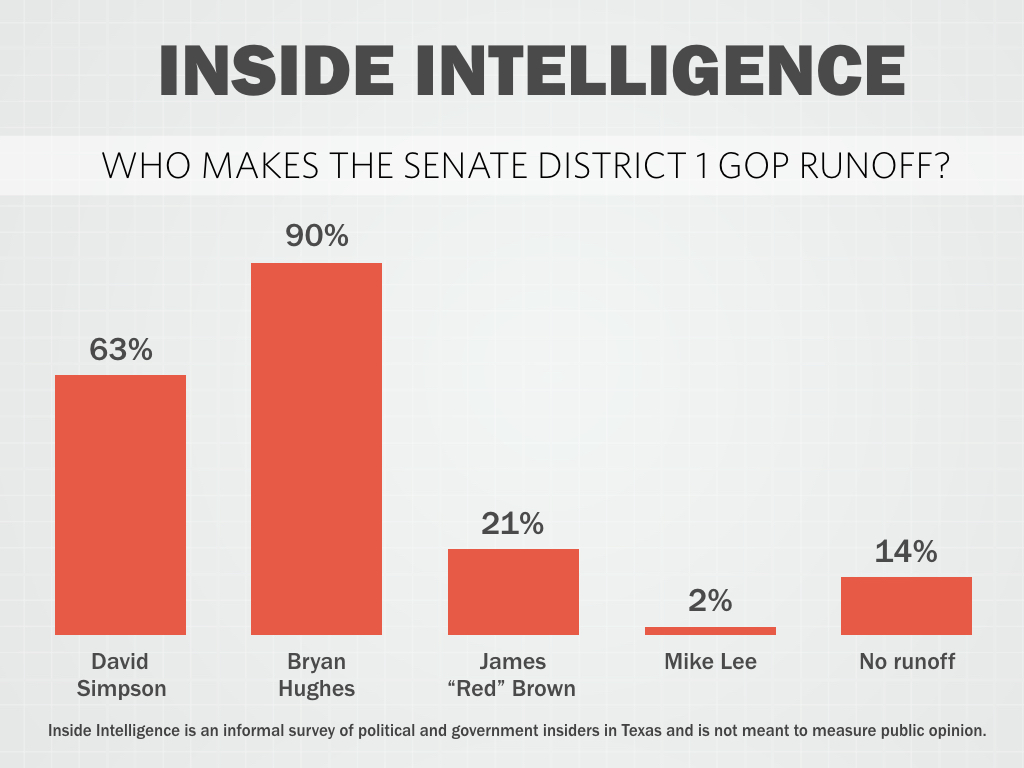 Which two candidates make the runoff for the open Senate District 1 GOP primary?

• "Hughes and Simpson are fighting for the same voters and Hughes will beat him and lead into the runoff. Brown slips in with the support of sane voters."

• "There is something about parts of that district that loves an interestingly unusual candidate."

• "Is Simpson running a campaign? It's like he's disappeared."

• "Red Brown will have Tyler support... but Tyler won't be able to match the voters Bryan will have come out for him in the runoff." 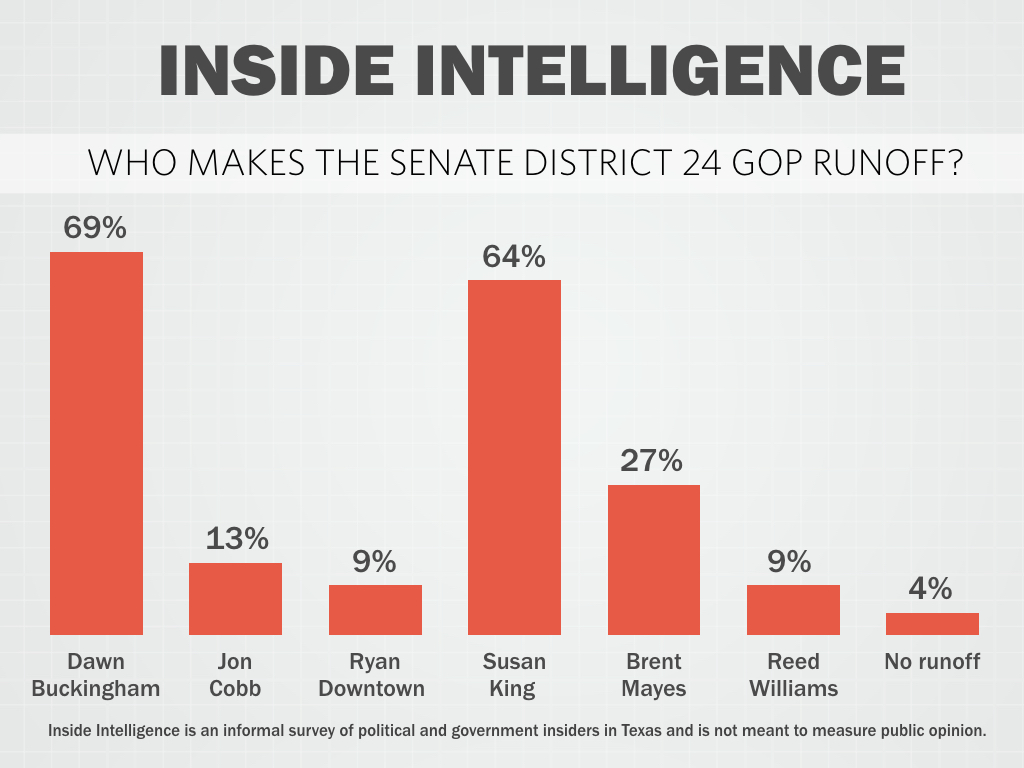 Which two candidates make the runoff for the open Senate District 24 GOP primary?

• "Ryan Downton makes it with Tim Dunn's support, Susan King gets in despite her effectively late entry with solid support in Taylor County and enough in Bell. Dawn Buckingham is third because she has no geographic base in the district and has been Dunn's main target."

• "Dawn will win the whole thing. I'll hesitantly give Susan the nod for the runoff over Mayes due to size of Abilene. But watch out for Mayes. He could edge Susan out altogether."

• "Toughest race to predict. Cobb and Dawn both have baggage."

• "Dawn Buckingham is working hard and should make the runoff. The other person in the runoff should be Brent Mayes. It could also be Jon Cobb. Both of these guys are working together, are supported by the crazy wing of the R party."