For this week’s nonscientific survey of insiders in government and politics, we asked about your 2016 presidential predictions.

With so many candidates still in the running for the GOP presidential nomination, we figured the best way to start off this week's survey would be to ask whether Republican voters would make a clear choice at all. In other words, would Republicans choose a nominee before the start of the national convention this summer?

A strong majority (60 percent) of the insiders thought the party would have a presumptive nominee by the summer. Another 36 percent did not think that would happen.

Donald Trump was favored by 55 percent of the insiders to make it to the convention with Jeb Bush named by 23 percent and Chris Christie named by 18 percent. 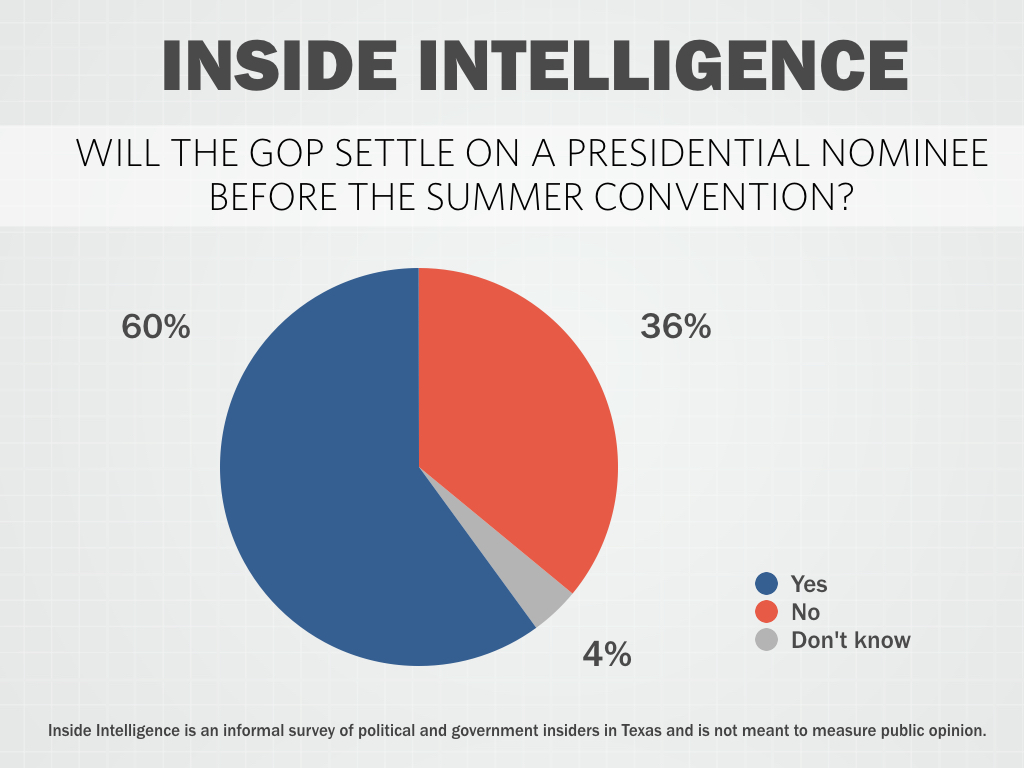 Will Republicans settle their presidential contest before their summer convention?

• "Don't underestimate the power of the establishment. They can end it when it is convenient for them."

• "Look no further than 2012 when Republicans had the same concern. It's still really, very early."

• "Cruz wins Iowa, then most of the Southern states. It'll be tough for the others to overcome that momentum."

• "The convention will be Trumped — the biggest RINO ever."

• "We may end up with a lunatic, but we'll decide before the convention." 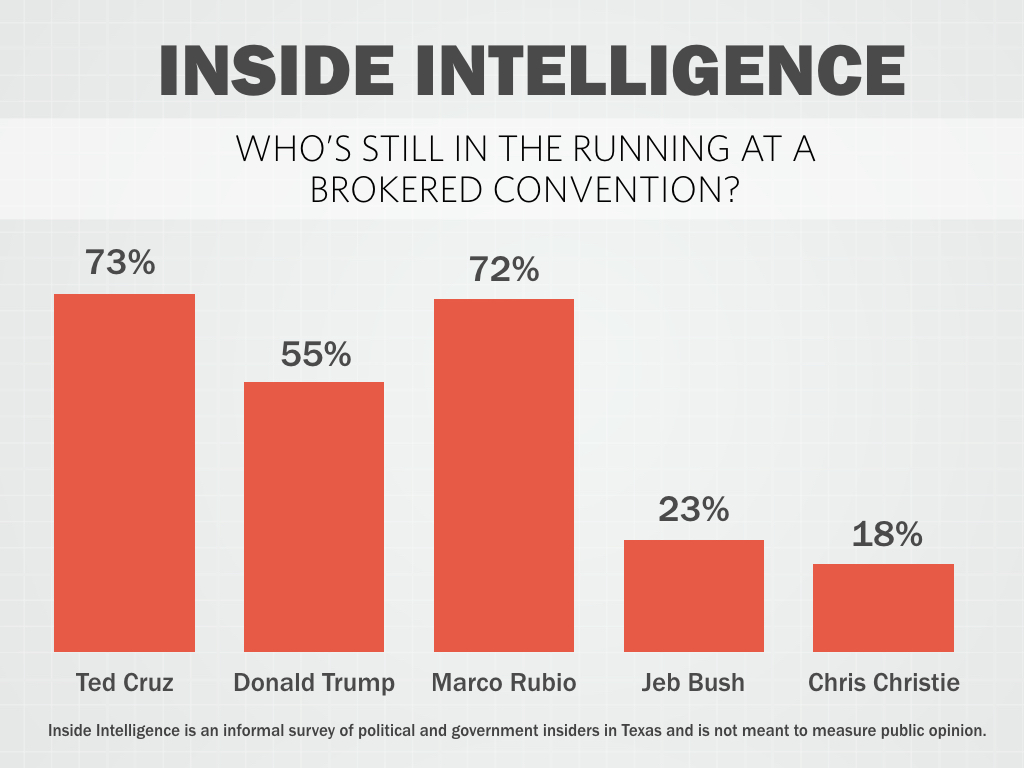 If they don't, which of these candidates do you think would be in the running in a brokered convention?

• "Cruz has been cruising toward a brokered convention since day one."

• "The delegates to the national convention are much more mainstream than the radicals who attend to the Texas GOP convention. Texas is only one of a few states whose grassroots elect their national delegates. Most state delegate positions are handpicked by leadership. This will create an environment that is very difficult for Cruz or Trump to win."

• "I vote in the GOP primary, and I have no clue who I would vote for today."

• "The race will be Cruz v. Rubio after New Hampshire." 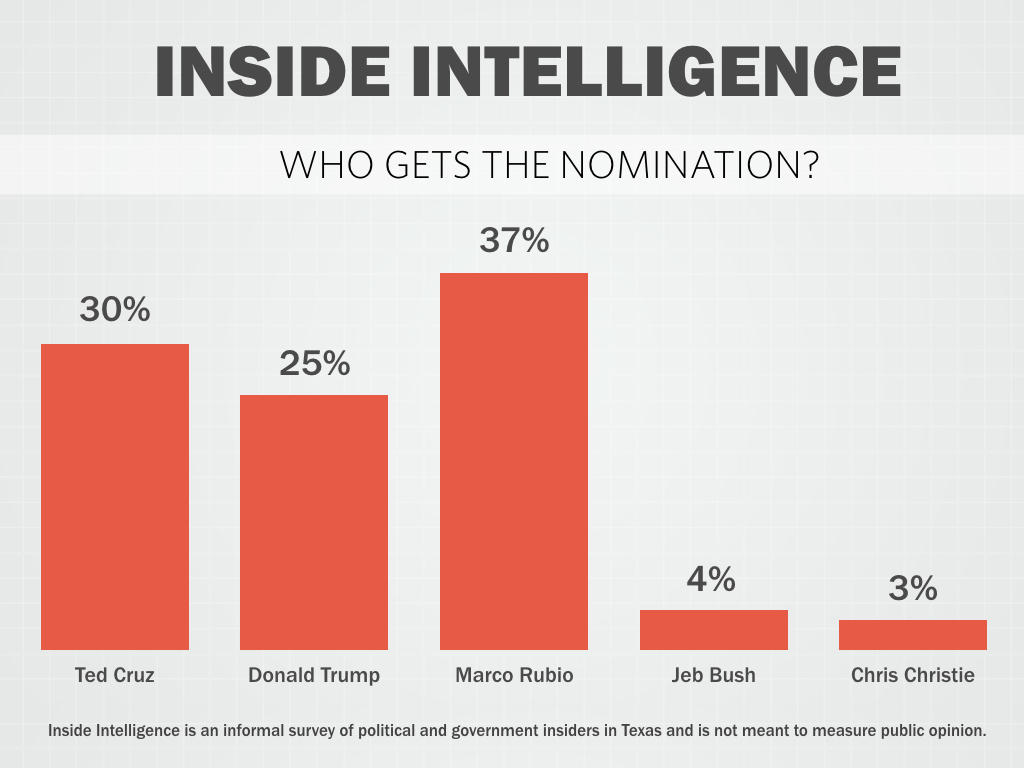 Either way, who do you think (today, anyhow) will get the nomination?

• "The party needs a win and they can only get it with Rubio on top of the ticket."

• "It's anyone's guess. Going into South Carolina in 2008, McCain was considered to be down and out. He was hanging on with one staff member and carrying his own bags onto SWA while he traveled the country. It's early January, and anything can happen at this point."

• "Jeb is the only one who has figured out that the only way out is through (Trump). And he's got the money to last."

• "Anyone's guess. If Trump loses some primaries, it will be between optimist Rubio and dour Cruz. Rubio may edge due to electability."

• "I think Cruz is in the driver's seat. But he has to meet expectations in Iowa (first or second), then do the same in South Carolina (first or second). If he fails in either state, he's wounded and Rubio gets the nod. But if he can get Iowa, it shows the evangelical trend, and South Carolina shows his southern/conservative base — the combination of those two gives him the delegates to win the nomination." 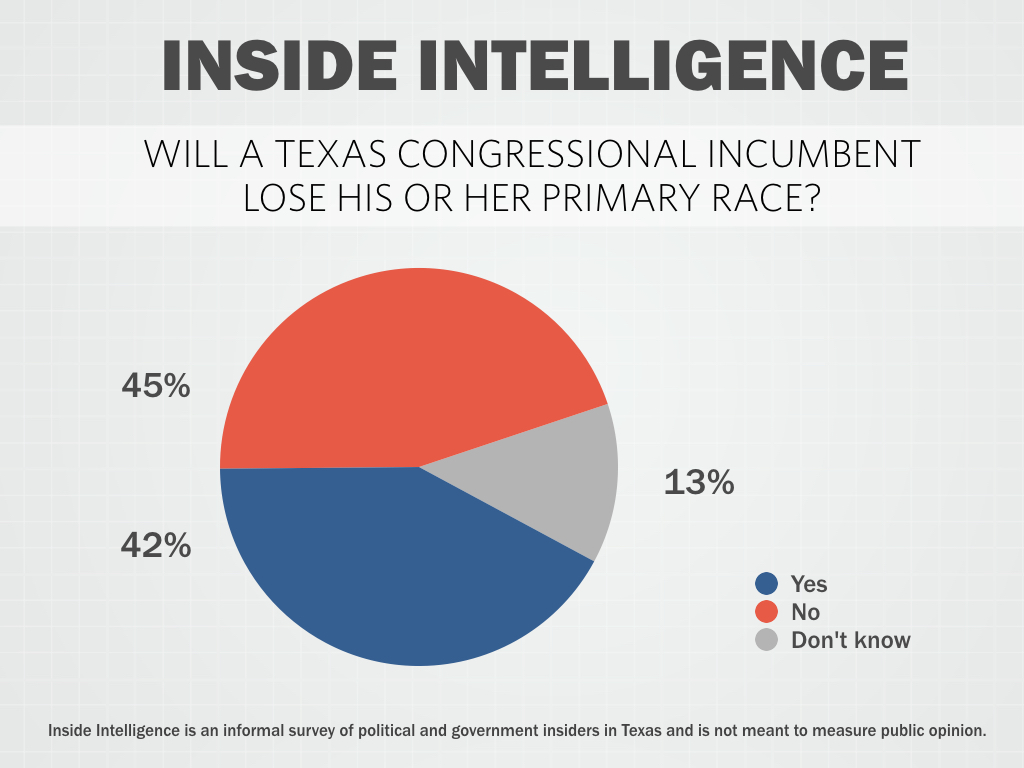 Will a Texas congressional incumbent lose his or her primary race?

• "Gene Green will become Houston's Frank Madla. He stayed a little too late."

• "Chances are there might be one coming home. The base is fit to be tied."

• "I would hate to be known as the SOB who beat Sam Johnson. In addition to being a hero, Sam is still a conservative opinion leader, effective Ways & Means Member, and active within his District."

• "If voters are smart, Farenthold will lose. So I'm voting no incumbents lose their primary."