For this week’s nonscientific survey of insiders in government and politics, we asked first about possible comebacks for once robust presidential candidates.

Former Gov. Rick Perry might have already pulled the plug on his presidential aspirations but a super PAC created last month — Bring Leadership Back PAC — is out to convince him that he was premature in making that decision.

Our insiders, though, are convinced that Perry was right to halt his run for the White House. More than four in five said his candidacy could not be reanimated.

Former Florida Gov. Jeb Bush, meanwhile, has seen his presidential hopes battered by the ascendancy of outside candidates like Donald Trump and Ben Carson. And it hasn't helped that his performance on the campaign trail has been widely panned.

We asked if his candidacy could be revived. More insiders thought he had a chance to rise again but a solid three-fifths didn't think he could return to a position at the front of the GOP presidential pack.

We ended this week's survey by asking which of the four early voting states would be won by Trump and Ted Cruz.

New Hampshire was the state most often named by the insiders as going for Trump. In all, 37 percent believed Trump would win the Granite State. Meanwhile, 26 percent said Trump would take South Carolina and 24 percent named Iowa.

Cruz, meanwhile, is strongest in Iowa, according to the insiders. A total of 63 percent of the insiders thought the Texas senator would win the Hawkeye State. Thirty percent said Cruz would take South Carolina. But just 7 percent said he'd win New Hampshire. 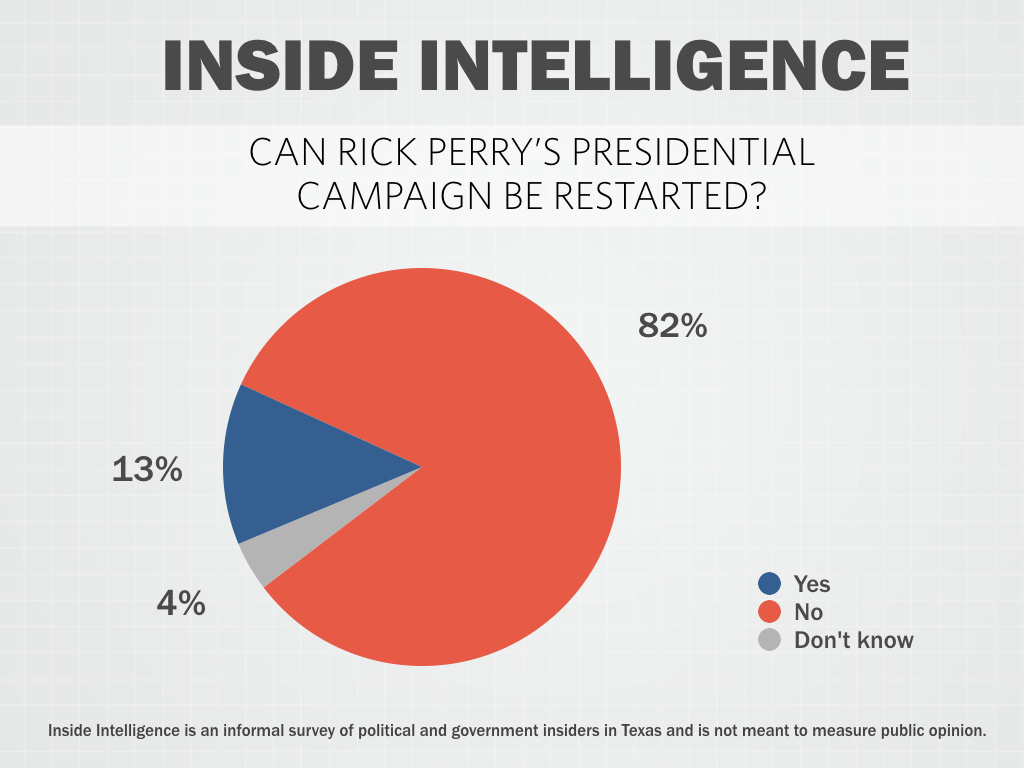 With talk of a super PAC trying to lure Rick Perry back into the presidential race, can this zombie candidate be reanimated?

• "He's deader than dead. And the indictments had nothing to do with it. It's all on the exceptionally mediocre Rick Perry."

• "Zombies are still dead even though they walk around."

• "Why not? With enough money and, frankly, compared to the rest of the group, he's a much better option."

• "Heavens no. It is literally too late to get on the ballot in several states." 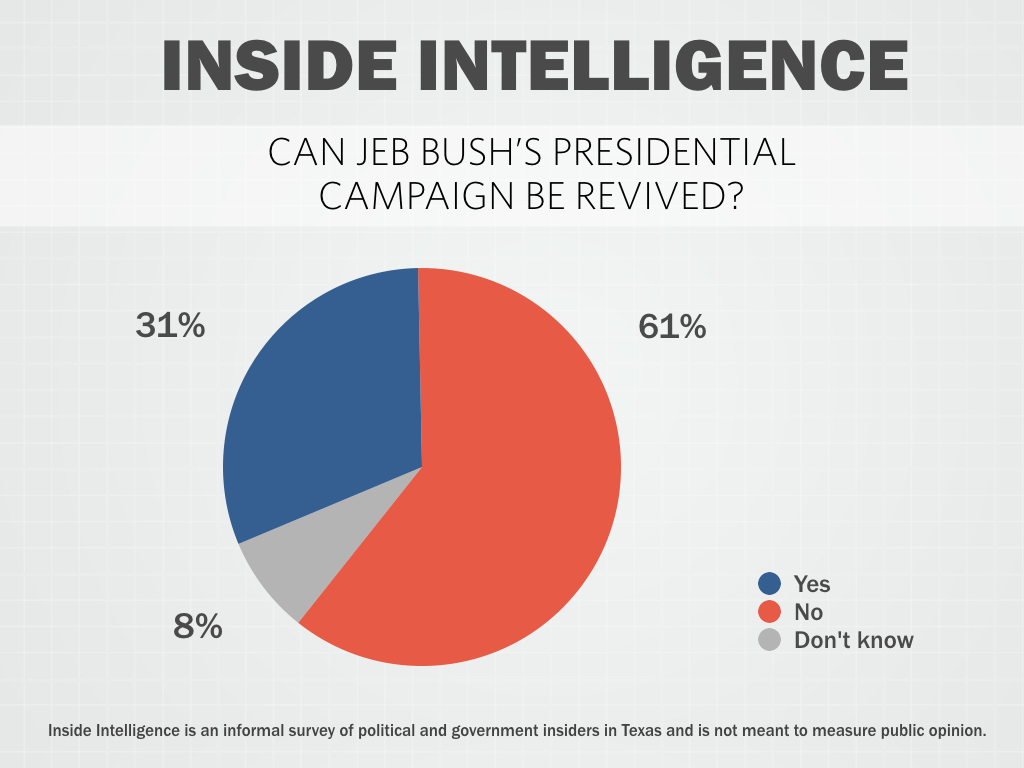 Former Florida Gov. Jeb Bush continues to languish in the polls despite the financial largesse of affiliated super PACs. Can his candidacy be revived?

• "Trump will lose Iowa and he will not handle it the right way. Trump's departure will open up the pathway for Jeb. All Jeb has to do is avoid the bully during lunch and recess."

• "There seems to be a dullness associated with his performance, it certainly isn't inspirational and he's oblivious to the populist zeitgeist... in fact, he doesn't even realize he and those like him are the reason for the populist wave."

• "Presidential campaign have become long games. As the fads flame out, the standards will emerge."

• "Yes, because he's paid for organization, which will get him to March 1. But Florida is March 15." 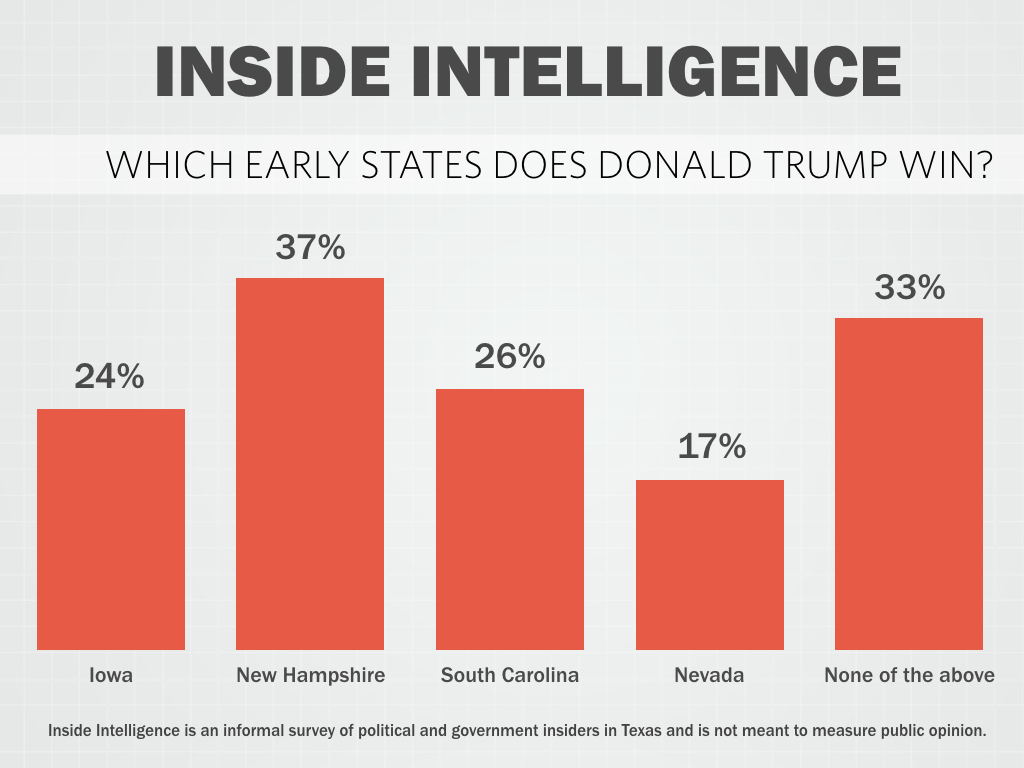 • "Trump is fading fast, even though the polls don't indicate it. The GOP cannot win with him on top."

• "I really have no idea, and anyone who says they do is selling a bill of goods. These are not 'normal' times, it makes the use of the axiom 'crazy season' seem quaint."

• "He'll be the proverbial '3-day-old fish' by then and destined for the trash heap."

• "He won't win a single one and he'll cry that the RNC is 'unfair.' Then he'll launch a 3rd party campaign." 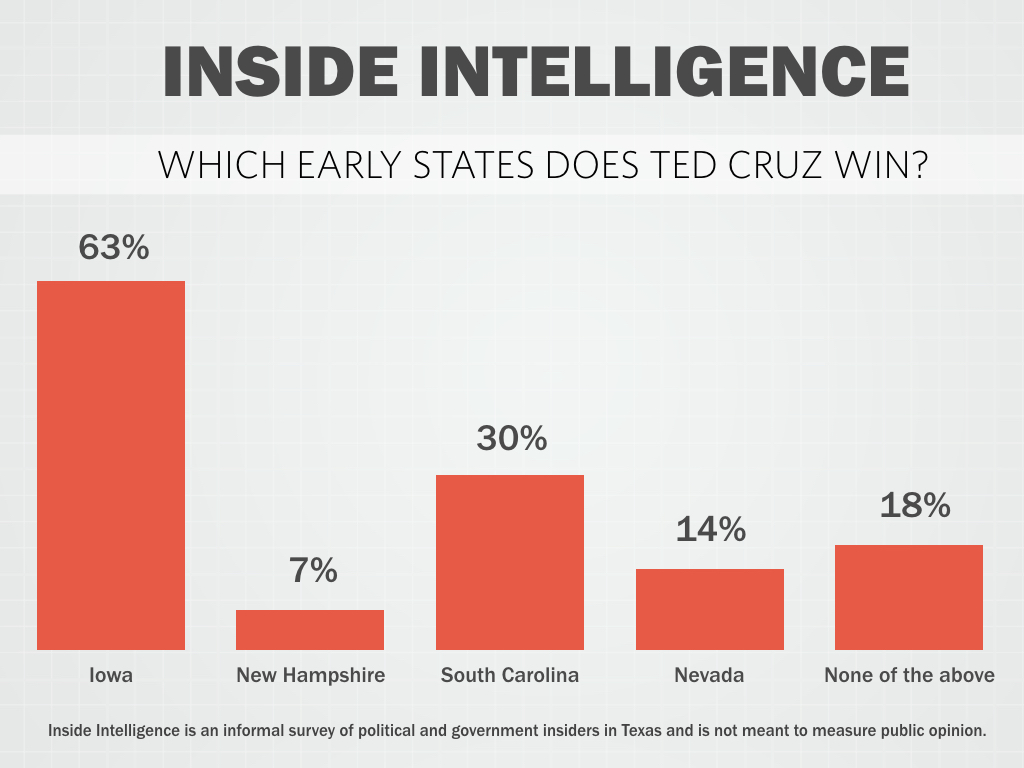 • "He will be overall delegate leader on Mar. 2"

• "Cruz has run a steady, low-error campaign that features exceptional organization. Cruz himself has proved an adept campaigner, both as orator and in arm-squeezing small events."

• "He had a chance in Iowa until he told the 'Don't Tread on Me' crowd he wants to end their feeding at the trough of government corn subsidies."

• "Ted is trending up. He's built the campaign on a solid foundation — grassroots, issues, and money. It's a winning combination."