For this week’s nonscientific survey of insiders in government and politics, we asked first about the attribute in a candidate that is most prized by voters.

We gave four possible responses, which many of our insiders noted was far from an exhaustive list. Of the options supplied, the insiders split evenly between "able to get things done" (23 percent) and "stands up to political adversaries" (22 percent). "Tells the truth" was favored by 12 percent while "experience" was identified as a desirable attribute by just 2 percent.

More than 40 percent, though, opted to supply their own attribute. Many of those were quite perceptive or humorous or both. And one used an emoticon in the response, the first such use that we are aware of in the history of Texas Weekly.

We spent time with the last two questions in an attempt to unpack what larger implications the attack on the Colorado Planned Parenthood clinic last week might have on the ongoing political conversation on free speech and gun rights.

Another 14 percent favored action on cooling the rhetoric and 13 percent thought action on access to guns was the better option.

We closed by asking whether the attack would have any effect on Texas lawmakers' approach to First and Second Amendment rights. On this, the insiders were nearly unanimous. Nearly nine in 10 said, "Don't count on it." 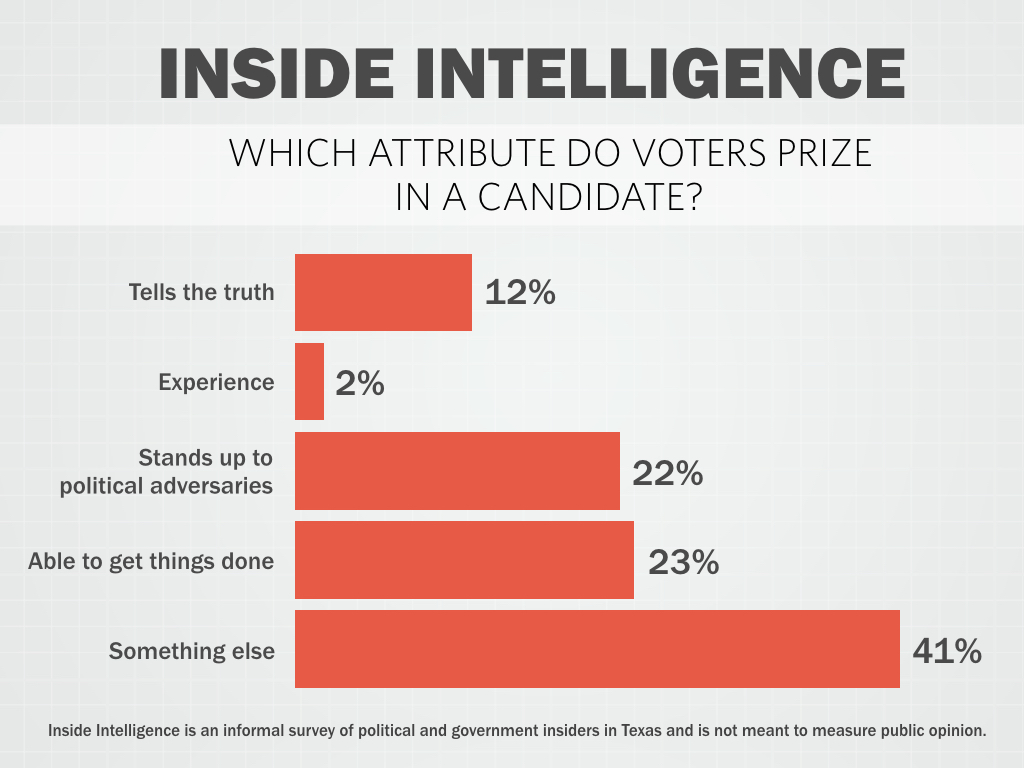 Which attribute do you think voters prize the most in a candidate for elected office?

• "Likability/personality — whether they think that matters or not, that's who they'll vote for. Just go chat with elected officials you know. They almost all have good personalities and are pretty good folks whether you agree with their politics or not."

• "Are you kidding me? It's political affiliation. Every stat tells us we are blind partisan voters." 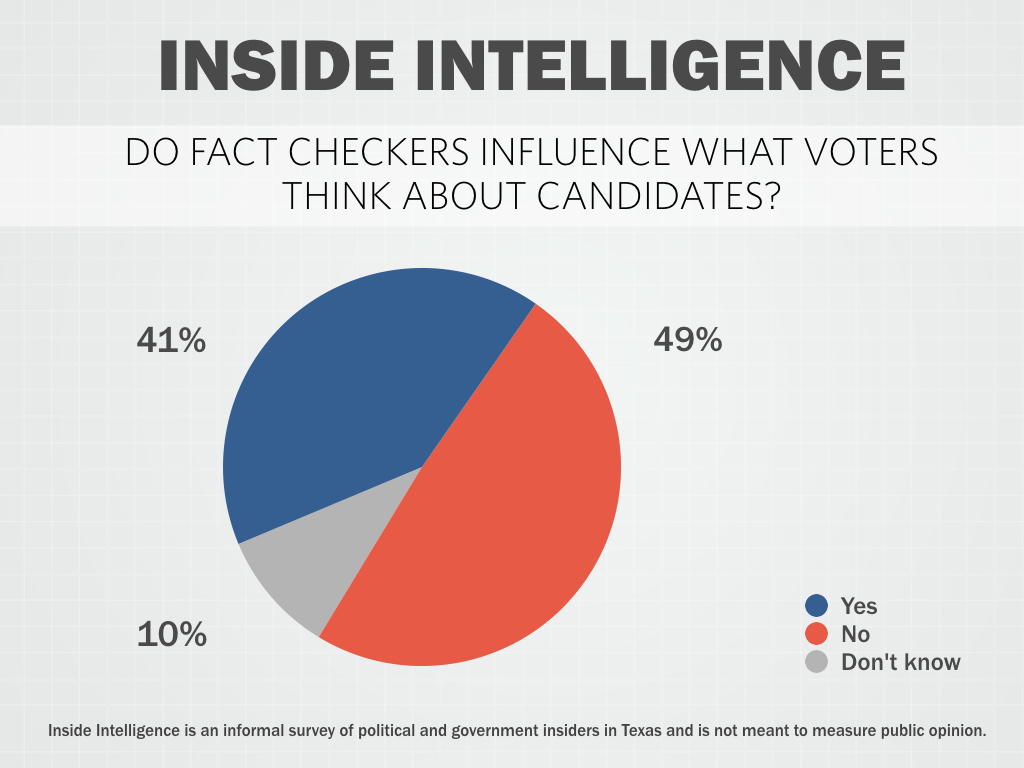 Do fact checkers from third parties and organizations influence what voters think about candidates?

• "Trying to avoid being too cynical this morning, but thinking voters use the fact checkers (if they bother to read them) to confirm what they already believe; and they probably don't change any minds."

• "Only wonks read fact checks. Unless the four Pinocchios becomes a TV ad."

• "The story of this cycle has been the inability of media to change the electorate's perceptions through the unearthing and airing of negative information. See Donald Trump and Hillary Clinton."

• "No. To GOP politicians, PolitiFact is a total joke. Any Republican who cooperates with PolitiFact, and lends respectability to its left-wing agenda, is guilty of political malpractice."

• "Fact checkers are not trusted sources." 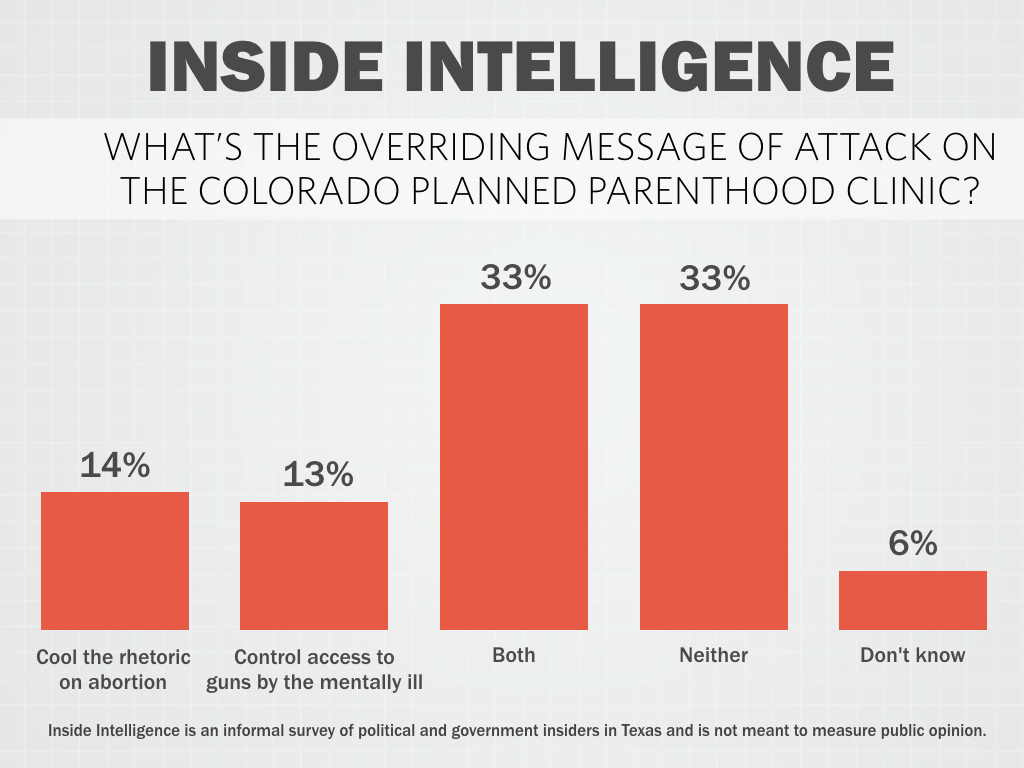 What’s the overriding message of the Colorado Planned Parenthood clinic attack for politicians?

• "I don't think they draw any particular new conclusion from the attack. It just reaffirms their position (whatever it is)."

• "You could almost predict this was going to happen and that silence would ensue. Sadly on all accounts."

• "The message should be about mental health, but abortion is a much sexier topic. Nobody is talking about the perpetrator — typical liberal response. Don't blame the criminal, blame others for causing the perpetrator to behave in such a manner."

• "I am pro-life and pro-gun but using one to enforce your belief is no better than ISIS."

• "The message should be everyone needs to chill out. But that one won't be well received." 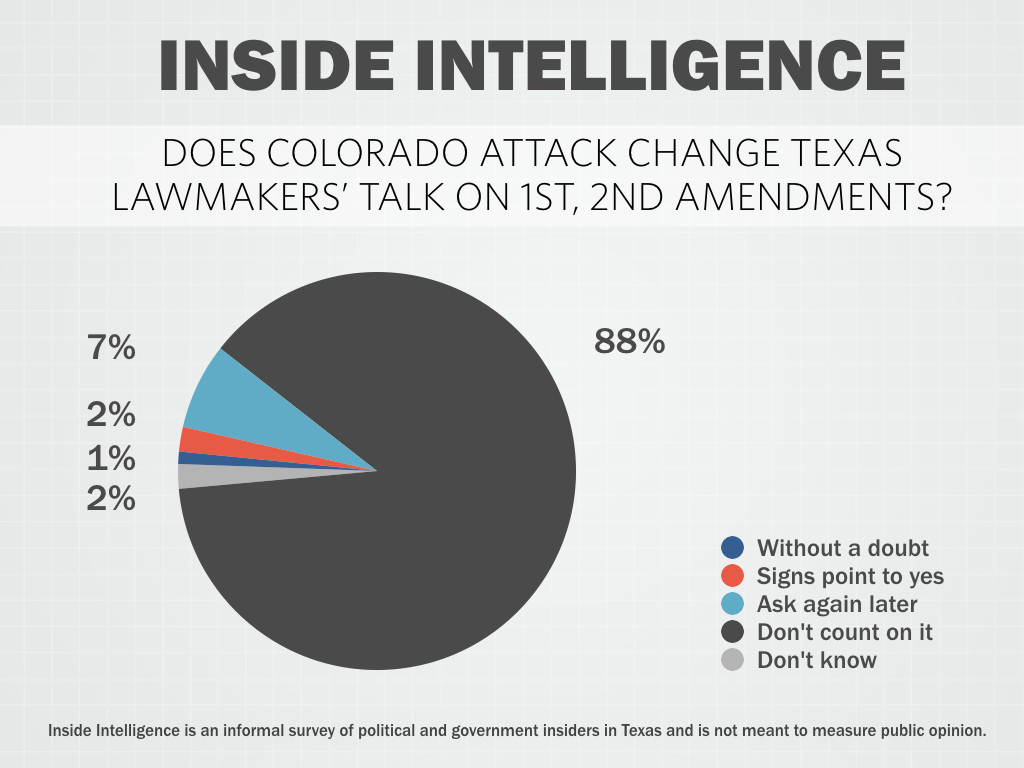 Does the Colorado attack change how Texas lawmakers talk about First Amendment and Second Amendment rights?

• "No. Not at ALL. They just say, 'if someone in the clinic had a gun they could have saved all those killed.'"

• "If the abortionist had guns, this would not have happened. A modest proposal..."

• "Rhetoric isn't to blame, which is your underlying assumption. The real issue is DEFENSE. Defense of innocent life. Defense of our Bill of Rights."

• "Maybe we should change how the Texas Tribune talks about rights. Maybe they should have their speech regulated. To muzzle citizens or lawmakers, the press must first take a dose and see how they like it."

• "Will efforts to put guns everywhere also apply to the inside of abortion clinics?"