Under the watchful eye of dozens of police, the protesters gathered to criticize what they described as xenophobic and misinformed policies aimed at the war refugees.

“Refugees are not terrorists. They’re escaping the terrorists,” said Syrian-born Nour Al-Ghraowi, an English literature student at the University of Texas at Austin who is in the United States on a student visa. “They are human beings like us.”

More than half the nation's governors have made similar vows to refuse Syrian refugees in the days since the terrorist attacks on Paris — and news that at least one of the attackers entered the country by hiding among the thousands of refugees fleeing the war in Syria through Greece.

Leaders of the protest said refugees admitted into the United States undergo a rigorous vetting process and will come to the Lone Star State despite Abbott’s order, because the federal government has the final say even if states attempt to cut off financial support that would help them.

“They’re coming no matter what,” said Joe Caterine, head of the Syrian People Solidarity Group, one of the organizers of Sunday’s protest. “If we’re not helping them find a place to live and find a job they’re going to be a burden on the government.”

One group helping with resettlements in North Texas, Catholic Charities of Dallas, announced after Abbott’s declaration on Monday that it would no longer accept Syrian refugees. But on Wednesday the group reversed course and announced that it would continue helping them find homes in Texas despite Abbott’s order, the Dallas Morning News reported.

Inquiries to Abbott’s press aides went unanswered Sunday. It was the second protest in as many days directed at Abbott. On Saturday, immigrants and activists staged a demonstration against the governor over the state's lawsuit against President Obama's deferred action program, aimed at allowing millions of undocumented immigrants to avoid deportation. 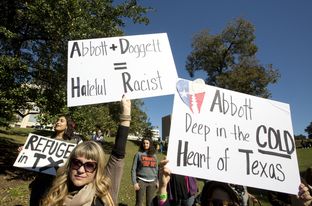 The Syria refugee protest began at Wooldridge Park near the Travis County Courthouse and briefly moved to the front of the Governor's Mansion a couple of blocks away. Not all the invective was directed at Abbott during the event. One demonstrator held up a sign that said “Abbott + Doggett = Hateful Racist.”

The registered Austin nurse holding up the placard, Anne Robinson, said she was not only upset with Abbott but also with U.S. Rep. Lloyd Doggett, D-Austin. Doggett, a reliably liberal voice in Congress, was among five Texas Democrats who defied President Obama last week by joining Republicans in support of a bill increasing the hoops refugees have to jump through to gain entry into the United States.

“I’m sorely disappointed in both Abbott’s and Doggett’s actions,” Robinson said. “They both claim to be Christian and I think their actions are very un-Christ-like.”

The bill Doggett supported, sponsored by U.S. Rep. Michael McCaul, R-Austin, would require key agency heads, such as the Homeland Security secretary and the head of the FBI, to certify that each refugee seeking resettlement in the U.S. had passed rigorous vetting procedures.

During an interview Saturday, Doggett said people deserve to have an extra layer of confidence in the refugee resettlement process. And on a political level, he said Democrats wanted to demonstrate that they are concerned about security. He said the bill was “presented in a way that almost begged Democrats to vote against it.”

“It’s so important that we not fall for every Republican gambit, to give the impression that Democrats don’t care about safety and Republicans do, hence my vote for the bill that … says let’s have the top bureaucrat at each of these agencies assure us that they’ve done as thorough a job as we believe they are already doing, and that refugees don't pose a danger in our communities,” Doggett said.