TAYLOR — Carrying placards, chanting in Spanish and calling for a halt to deportations of people without work papers, a few dozen immigrants and activists kicked off a 37-mile “pilgrimage” Thursday from a federal detention facility to the Texas Governor’s Mansion.

The group, which included labor organizers and Democratic activists, is highlighting Republican Gov. Greg Abbott’s leading role in the lawsuit that has successfully blocked much of President Obama’s controversial deferred action proposals, which would have granted temporary legal presence to millions of undocumented immigrants, including hundreds of thousands in Texas. Organizers are calling on Abbott to meet with the immigrants and hear their pleas for help.

John Patrick, president of the labor organization Texas AFL-CIO, acknowledged that getting Abbott to change course on immigration reform was all but hopeless. Abbott has made his efforts to oppose Obama on immigration and other policy areas his political calling card.

“Recent events suggest that this may be the equivalent of trying to squeeze blood from a stone,” Patrick said at a press conference before the pilgrimage began outside the federal T. Don Hutto detention center in Taylor. “But at some point, the governor of Texas must rise above the passions of the moment, stop trying to fuel his personal ambitions by catering to fear and division, and do the right thing for the people of the state of Texas.”

The governor’s office did not respond to requests for comment.

The immigrants are walking over three days from the Hutto facility to the AFL-CIO building near the governor’s mansion, where they plan to stage a protest and rally Saturday. Organizers say they expect 1,000 people to attend.

At times, the criticism directed at Abbott got personal — and extended to his family.

One of the immigrants participating in the pilgrimage was 39-year-old restaurant cook Irma Hernandez, who is originally from Santa Cruz Analquito, El Salvador. She told reporters she grew hopeful during the 2014 campaign when she heard Abbott’s Hispanic mother-in-law speaking up for him in Spanish.

“She said he was a man with a good heart. And I thought, 'Wow, this man is going to do something for us,'” Hernandez said. “But he ended up doing the opposite, because this man has a black heart.”

In an interview, Hernandez explained her motivations for walking through miles of desert and crossing the border illegally near El Paso some 10 years ago.

“I emigrated because my country is too poor,” she said. “I’m not a criminal.”

Hernandez said it’s gotten increasingly difficult to find work in Texas without work authorization. But she said she has managed to find restaurants willing to hire her despite her undocumented status.

“They all ask for papers, and I say, 'Well, I don’t have any,'” she said. She said she had never been charged with a crime or done anything “shameful” but did get a ticket once for driving without a license. Like many undocumented immigrants,  she continues to drive without a license because “they haven’t given me that opportunity,” she said.

While Hernandez was speaking at a podium during the press conference in Taylor, an immigrant activist from Houston, Leobardo Santillan, disrupted the event. Organizers attempted to remove him, but he later joined the march toward Austin.

He was holding up a provocative placard that said “Welcome to ISIS Texas.” The sign harshly criticized Abbott, U.S. Sen. Ted Cruz and Abbott’s wife, Cecilia Abbott, the first Hispanic first lady of Texas, calling her a “traitor to her people” in Spanish. 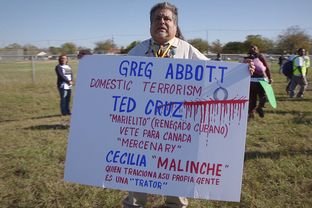 Enlargephoto by: Todd Wiseman
Houston immigration activist Leobardo Santillan holds up a sign in Taylor, Texas on Nov. 19, 2015, during a press conference and rally about immigration reform. Organizers attempted to eject Santillan from the ally but he remained at the event and later joined their march toward Austin.

Bo Delp, a spokesman for the Workers Defense Project, the chief organizer of the press conference and march, emphasized that Santillan was not a member of the group and was not invited to the event in Taylor.

"This issue is something a lot of people are really passionate about," Delp said. "Today the message from Workers Defense Project was about love, not hate. We don't approve of anything that man did or said."