For this week’s nonscientific survey of insiders in government and politics, we asked about next week's vote on a slate of proposed constitutional amendments.

Voters on Tuesday will give a final up or down on seven changes to the Texas Constitution, ranging from high profile initiatives to increase the property tax homestead exemption and funding for roads to more parochial concerns such as allowing very small counties to perform private road construction.

Then there are the constitutional provisions that defy easy category, such as allowing pro sports teams to conduct charitable raffles, allowing statewide officials to live somewhere other than Austin and enshrining the right to hunt and fish in the Constitution.

For the most part, the insiders predicted success for the proposed amendments. They were nearly unanimous in saying the voters would approve the increased homestead exemption. More than nine in 10 of the insiders also thought the voters would act to exempt a surviving spouse of a disabled veteran from property taxes and would put the right to hunt and fish directly in the Constitution.

Close to 90 percent predicted success as well for dedicating a portion of sales tax and motor vehicle sales tax revenue to fund roads.

In fact, the only proposition that was predicted to pass by less than half the insiders was the proposal to allow statewide officials to live outside of Austin.

With that said, close to three-fourths of the insiders thought turnout wouldn't surpass the 9 percent recorded for the constitutional amendment election of 2013 in which a major water funding proposition was approved.

Fully three-fourths of the insiders didn't think the amendment process was a good way to make public policy and 81 percent thought there are too many amendments to the Texas Constitution. 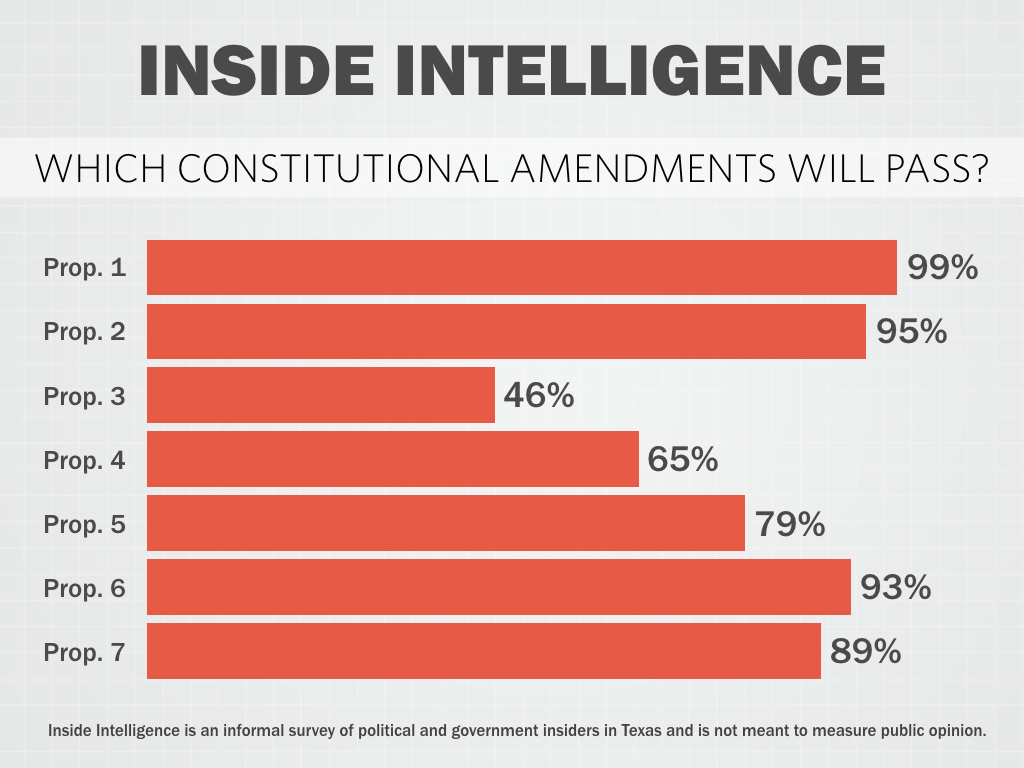 Of the proposed constitutional amendments on the ballot next week, which will pass?

• "Will Paxton be able to serve from Huntsville?"

• "They'll probably all pass. That don't mean I'm voting for them."

• "Only concern has been carving out raffles for pro sports by those concerned about gambling. It will pass because the concern is unfounded."

• "Without any organized opposition, these things always pass."

• "I have great respect for the military. But don't their kids and spouses along with the retirees still need services like education EMS Fire and police. Absolutely no one should be exempt. Republicans will tax exempt and tax reduce us into a state income tax just as they have already raised taxes on Texans. Especially the franchise tax. Since when is it a Republican ideal to tax a business that makes nonprofit. WTF? Have a plan not talking points. I say this and I am a Republican. I mean super right wing. When does the nonsense stop?" 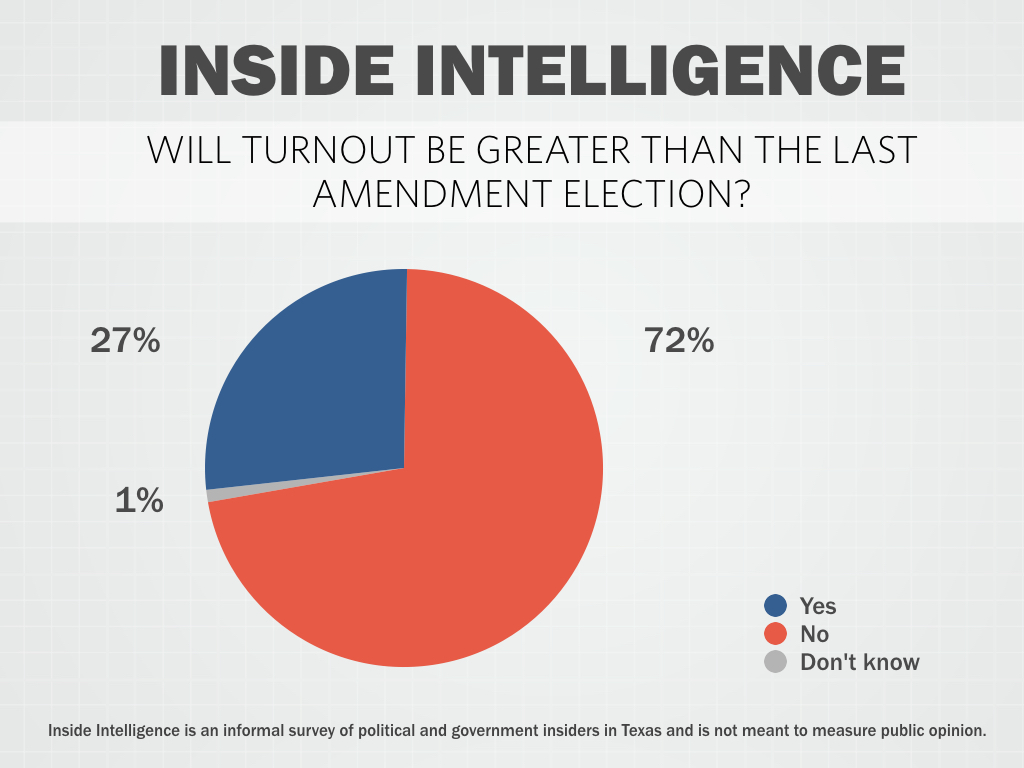 Less than 9 percent of registered voters turned out to vote on nine proposed amendments in November 2013. Will turnout this year be greater?

• "One-third of the vote will come from Harris County; with an important Mayoral vote in Houston and the HERO ordinance driving huge turnout in that area, I think the number will be slightly higher."

• "There's no high profile national or statewide contest to attract voters to the polls. Ain't nobody got time for proposition silliness."

• "Higher turnout will not be because of the amendments but because of local issues in Houston and Montgomery County, among others."

• "A ton of money was spent in 2013, but this cycle there is very little paid communication. Eight percent would be an ambitious goal."

• "Other elections around state will boost turnout." 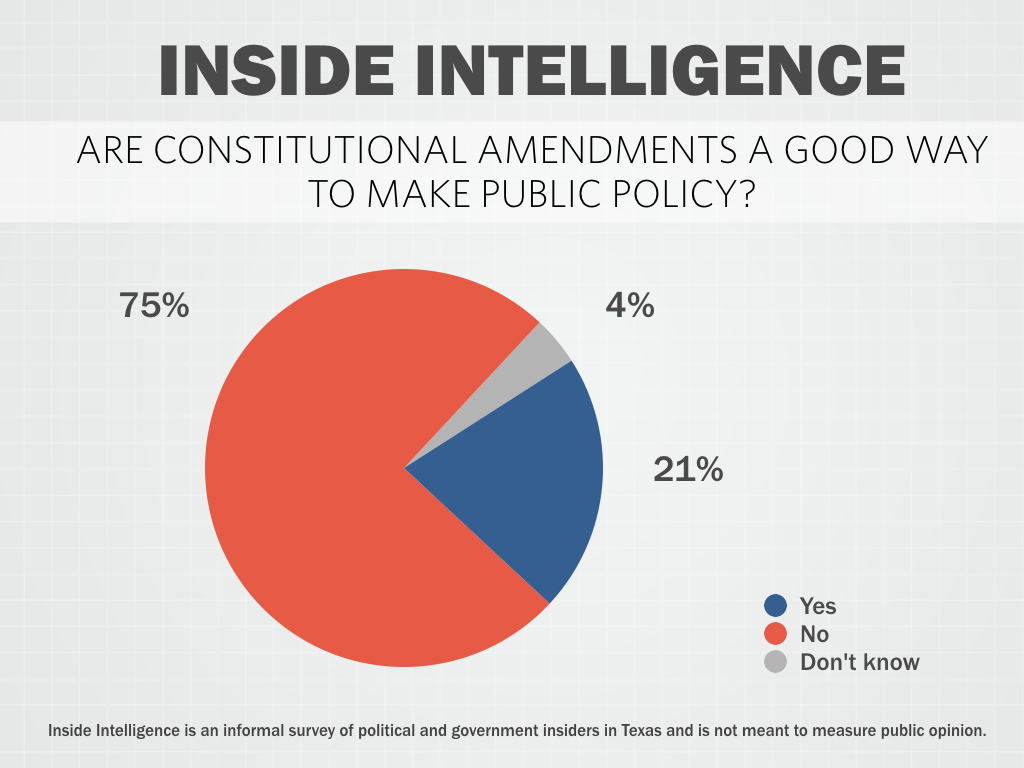 Are constitutional amendments a good way to make public policy?

• "It depends on the issue. There are times when the Constitution simply needs to be changed because we have made it such a complex document that details so much of how our state government does (and does not) operate. The problem is that important public policy issues are then punted by a Legislature without the will to make important decisions to an electorate that is too often clueless about what they are voting on."

• "The Legislature amends the constitution — the voters just ratify the changes. It is cumbersome, but it requires lots of legislative (2/3) and voter buy-in to achieve. Not a bad thing."

• "Structurally, yes, constitutional amendments are a good way to establish lasting policy. The contents of any amendment, of course, may be trash. And so, on occasion at least, we're establishing lasting trash."

• "No ... BUT, it's preferable to full R&I (referendum and initiative). States that make general law by popular election (see, e.g., California) are way more screwed up that Texas." 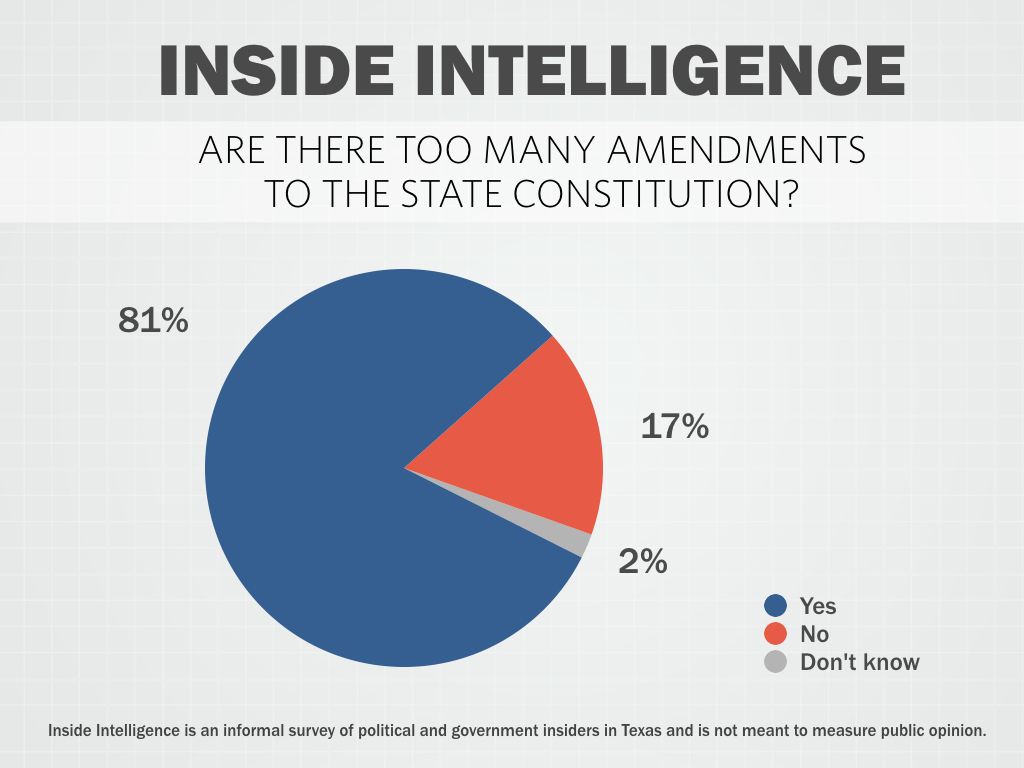 Evaluate: there are too many amendments to the state constitution…

• "It is the nature of the beast. If you want to limit the number of amendments, scrap the current document and start over with something basic and simple and force the Legislature to do its job — legislate. Good luck with that."

• "As soon as I get MY constitutional amendment in there, then that'll be enough."

• "We needed a Constitutional Convention about 20 years ago when the Lege was still bipartisan. It is far to dangerous with extremist influence in the Lege today."

• "The purpose of the constitution should not be creating a law that is just harder to change in the future."

• "Streamlining the Texas Constitution: The job everyone knows needs to be done but nobody really wants to do."