For this week’s nonscientific survey of insiders in government and politics, we asked about Planned Parenthood getting kicked out of Medicaid and budget cuts to child therapy services.

Texas lawmakers have made news this legislative interim for a couple of actions related to the Medicaid program. The most recent one was the move by Gov. Greg Abbott to kick Planned Parenthood entirely out of the Medicaid program in the wake of undercover videos taken by an anti-abortion group, one of them at an abortion facility in Houston.

Earlier this summer, a directive to cut $100 million over two years to child therapy services under Medicaid mainly through provider cuts caused consternation among a bipartisan cross section of the Legislature. The head of Texas' health and human services agency eventually said he would makes cuts up but only at levels that don't endanger children's access to services.

We began by asking who gets the credit or blame for moving to exclude Planned Parenthood from the health screening services funded under the Medicaid program. About 60 percent said the buck stops on Abbott's desk while another 18 percent cited Lt. Gov. Dan Patrick and 14 percent named Senate Republicans.

Meanwhile, more than 40 percent believed Senate Republicans shoulder the credit or blame for those cuts to the Medicaid child therapy services. About one in four said Patrick gets ownership of the therapy cuts and another 20 percent cited Abbott.

When it comes to how those cuts would happen, about 40 percent thought the state would eventually take up to half the $100 million in mandated cuts. Another 25 percent thought the state would get more than halfway to the $100 million mark in cuts while the insiders split nearly evenly between the cuts not happening at all (18 percent) and happening in full (16 percent). 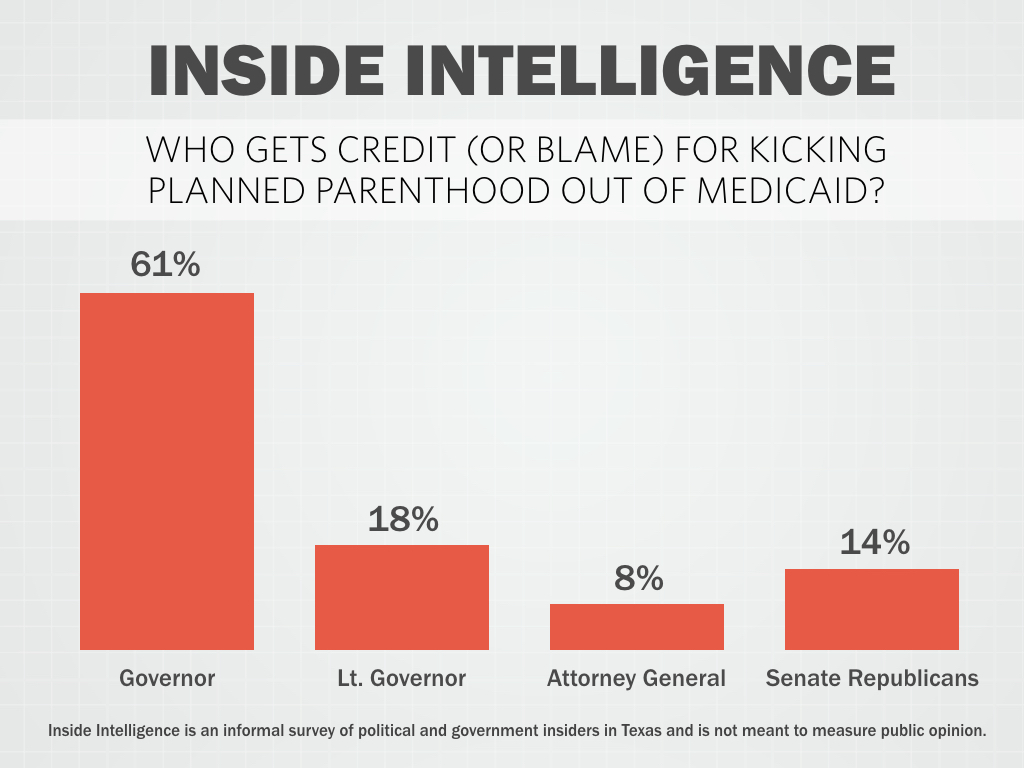 Who gets most of the credit (or blame) for Texas kicking Planned Parenthood out of the Medicaid program?

• "The announcement came from the South wing of the Capitol. It's all on Gov. Abbott."

• "I'm happy that Dr./Senator Schwertner held a public hearing. The fact that PP didn't show up made a very clear statement."

• "Lt. Guv has been the most vocal so he will make sure he gets the credit."

• "Abbott gets the credit because he's the only one in town." 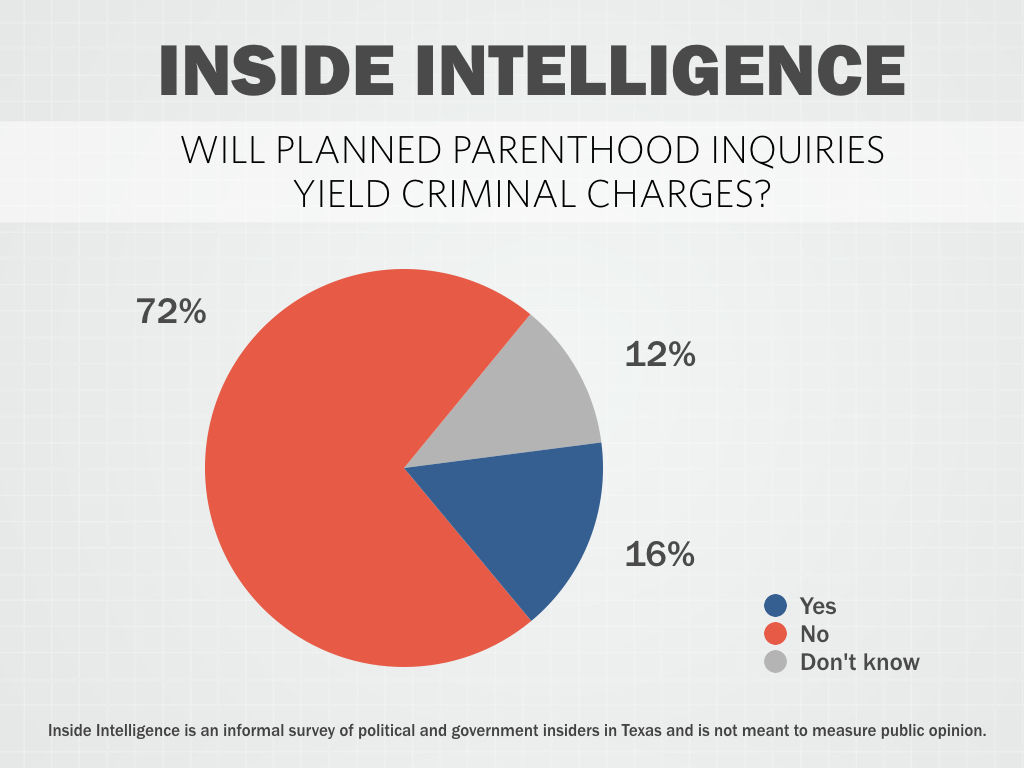 • "While some prosecutor may try to do something, the likelihood is that it goes nowhere. This is more a case of lack of ethics rather than commission of crime. It's a PR battle, and Planned Parenthood has lost."

• "Planned Parenthood did nothing wrong so any charges would be lies trumped up by the far right anti-women Republicans."

• "The video evidence of criminal behavior is overwhelming. PP's denial of crimes, then stating that they'd discontinue doing what they claimed they weren't doing — that's admitting guilt."

• "Regardless of your personal feelings, this issue failed to gain the media attention it deserved. It was a two-week story and now the nation has moved on to the next issue."

• "There will probably be no charges regarding the sale of fetal tissue, but the defenders of Planned Parenthood who are insisting they did nothing wrong are missing the point. What the videos revealed is that the women who run Planned Parenthood have a callous, unserious and even joking attitude about the abortions they perform. They show that they truly believe it is no big deal. Any credibility that Planned Parenthood had is completely gone. Only the strident crazies support them now. American attitudes toward abortion will remain ambivalent, but Planned Parenthood is over." 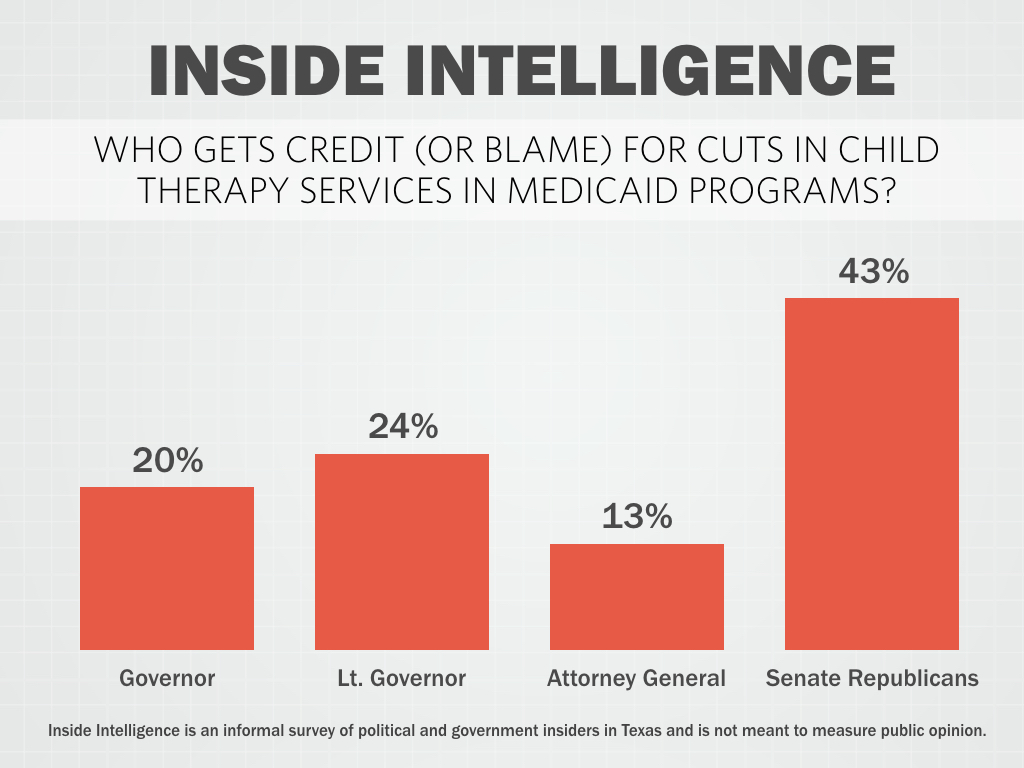 Who gets most of the credit (or blame) for cuts in child therapy services in the Medicaid program?

• "OTHER: The greedy providers billing for non-effective 'services, which are not evidence based. It is not the price but the utilization for the wrong patients and for the wrong treatments. Everyone seems to miss the real cause of the problem."

• "What constitutes 'child therapy’? Administering drugs? Thank goodness for anyone with the courage to help children, rather than to drug them into submission."

• "You should've provided an 'all of the above' option. This is an issue that all Republicans will have to deal with."

• "Cold and heartless! Becoming the calling card for Republicans in the Texas Senate." 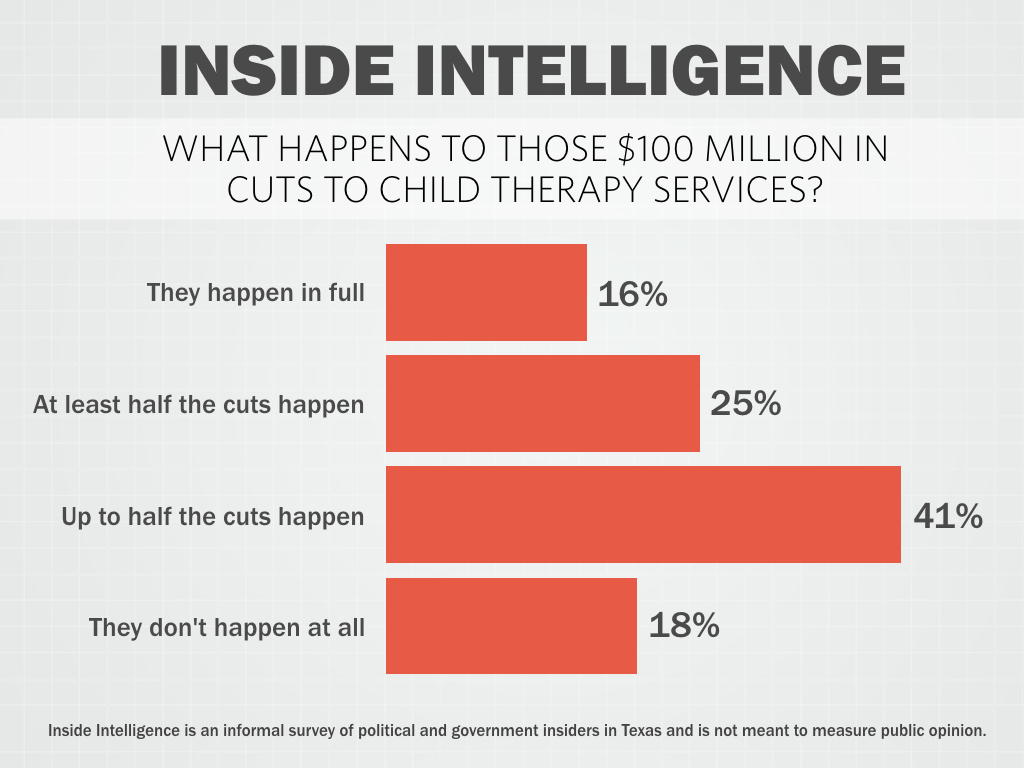 What happens to the $100 million in cuts to child therapy services ordered by lawmakers?

• "The Republicans are doing exactly what everyone expected them to do. Make sure those kids are born with all their glorious special needs but cut all funding for them so they must live a horrific life. There will be a reckoning for these God invoking false prophets."

• "If they don't happen, then taxpayers need to know why. And who's responsible for negligence."

• "Some of the cuts will remain... until they become a campaign issue. These cuts may have the same electoral implications as the CHIP cuts that were done a few legislative cycles ago. Former Democratic congressman Chet Edwards was able to hold on for one more cycle because of CHIP."

• "Some level of cuts was warranted. Problem was Legislature is not very precise in targeting needed cuts... instead, it uses a hatchet."

• "The real question is what happens to the children left without services."