For this week’s nonscientific survey of insiders in government and politics, we asked about lawmakers' invocation of God and religion during this year's legislative session.

Lawmakers' religious beliefs and how those beliefs played out in policy debates on guns, abortion, same-sex marriage and other issues was the animating force for the Tribune's "God & Governing" series that kicked off last week. So this week we decided to quiz the insiders on how they viewed the role of religion in the Capitol.

Seven in 10 thought God and religion was invoked too much in the 84th session with another quarter saying the mentions of God and religion were about right. Nearly two-thirds of the insiders believed mentions of the divine were more frequent than in past legislative sessions. Another 30 percent thought the God talk was in line with previous sessions.

Three of five insiders did not think a non-Christian could win a statewide election in Texas and another 56 percent thought separation of church and state will become an issue in the upcoming elections. 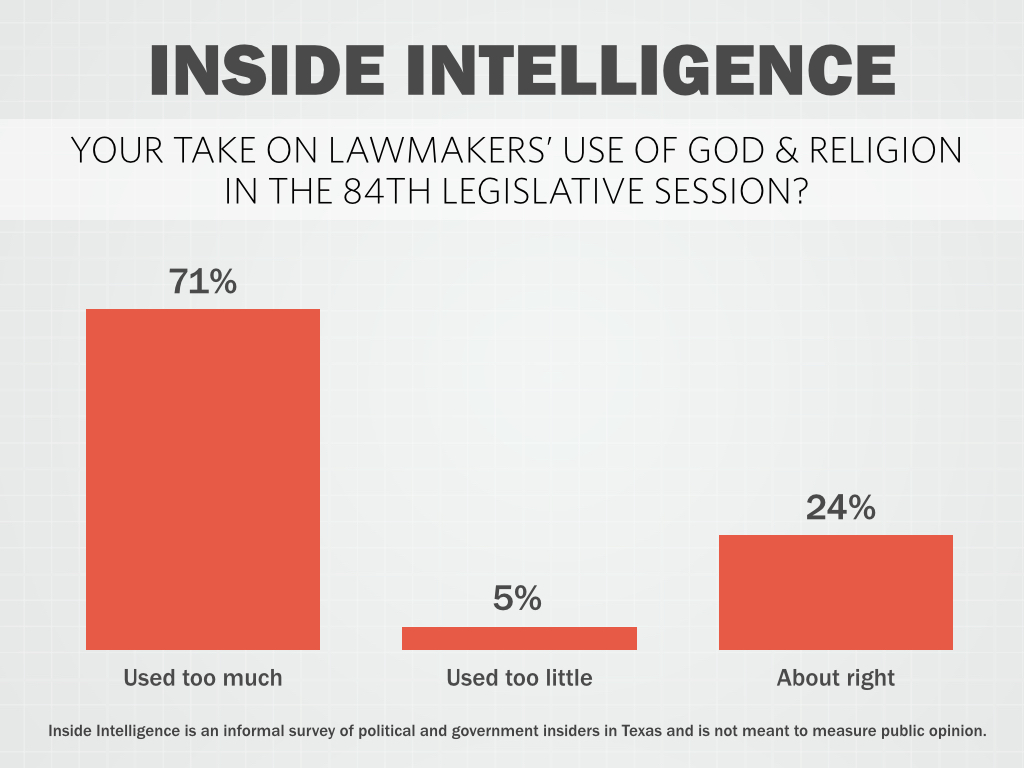 What’s your take on lawmakers’ use of God and religion during public policy debate in the 84th legislative session?

• "Being human, they are by definition not qualified to speak authoritatively about a higher being's motives regarding state legislation."

• "Voters elect men and women to hold to the original intent of our Founding Fathers. They were God-fearing men."

• "I think some did a lot and some none. On balance, they were representative of the current population of Texas."

• "When you use God to justify campus carry, you know you're reaching."

• "God and religion aren't used too much — they are misused too much. Living a life of faith is a daunting challenge requiring much thought and prayer. Sometimes our politicians can be heard talking loudly about their faith as if the answer's clear and simple. When you consider some of the difficult challenges Texas is facing, more prayer is probably in order." 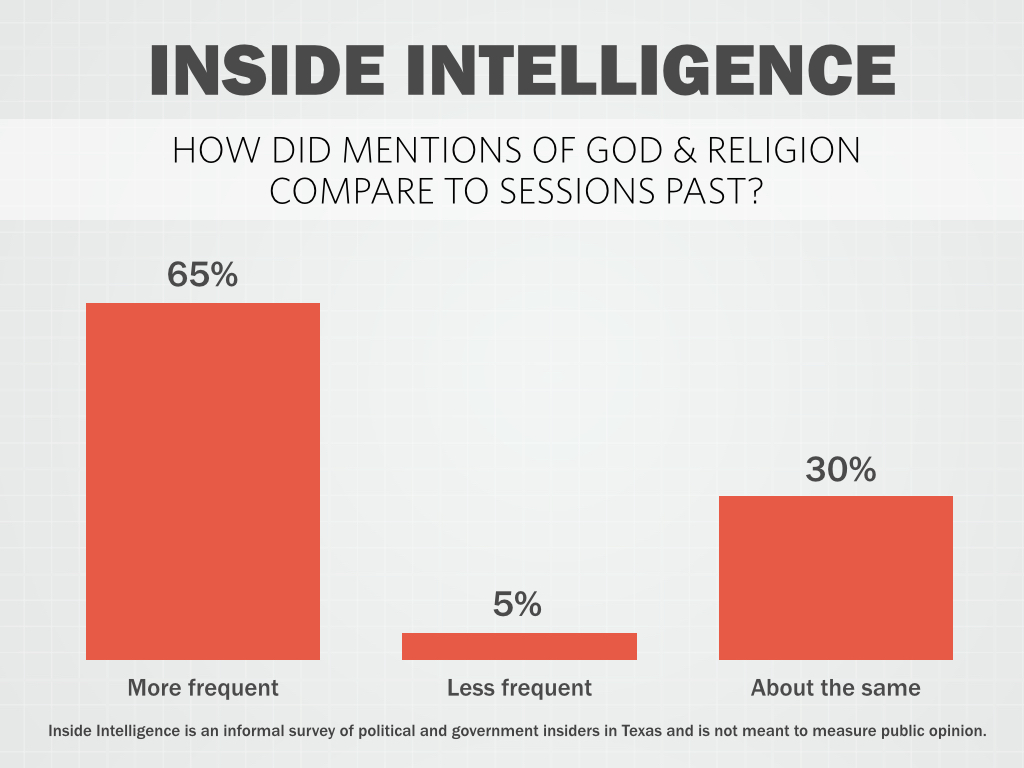 Compared to sessions past, invocations of God and religion this session were…

• "Seemed more frequent, but it could be just louder from a small minority."

• "Voters are making their voices heard."

• "The voters have spit out many of the lukewarm members of the Legislature (Rev 3:16) and those remaining have been speaking boldly (Acts 4:31)."

• "If the members feel the need for supernatural guidance, let them pray in private. They are here to conduct the state's business, not attend a tent revival." 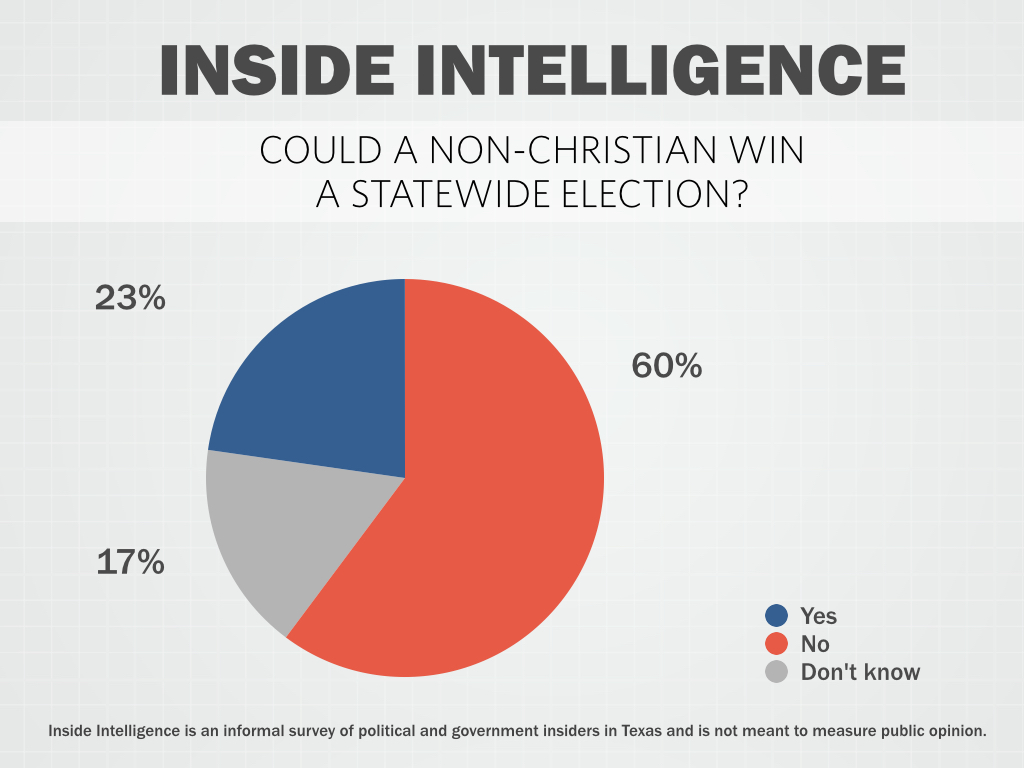 Could a non-Christian win a statewide election in Texas?

• "Some may have already won. We can hear a pol's words but we truly don't know their minds and hearts."

• "Every Texan understands that we're in dire need of help to save our nation. We're not interested in those who think they can 'go it alone.'"

• "Not currently. Even Joe Straus has faced issues about being 'Jewish' from his own legislators and outside forces. Until more progressive thinkers decide to increase their voting patterns, it will be tough for non-Christian candidates. Have you all evaluated Perry/Abbott appointees to see if they are non-Christian? That would be interesting."

• "Not unless he was a star athlete responsible for some major championship!" 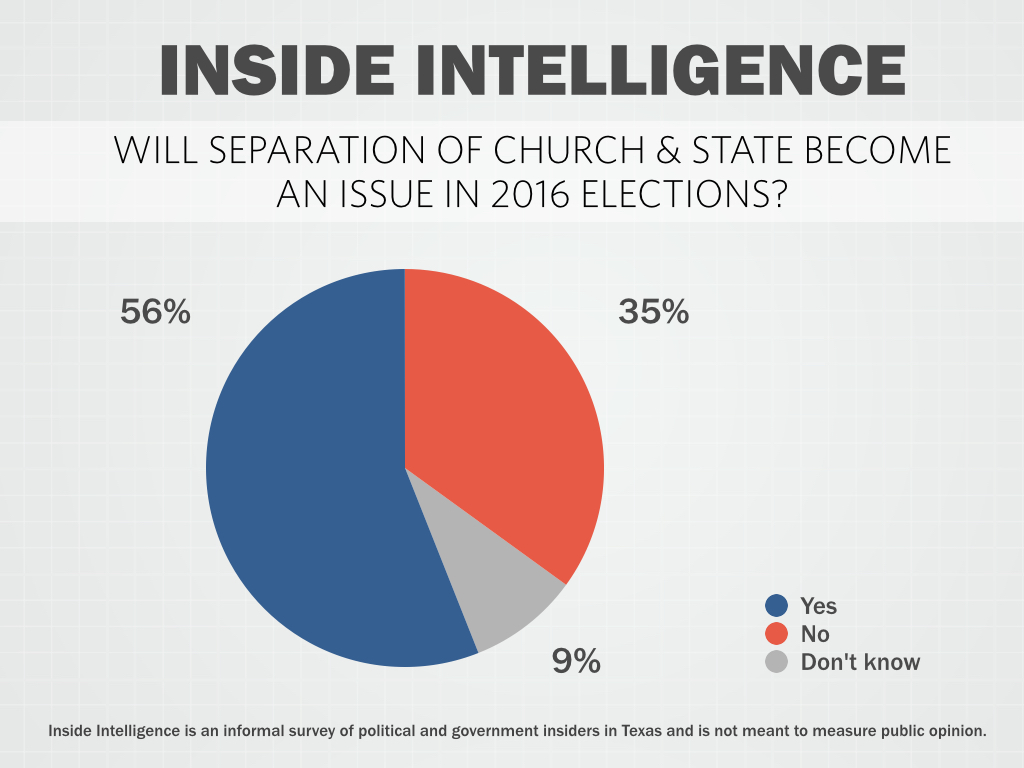 Do you expect efforts to erase the wall of separation between church and state to come up as a campaign issue in 2016?

• "It is a great campaign issue for Republicans. Democrats have no idea how to respond."

• "That would be shadow boxing because there is no wall. The Founders intended the government to stay OUT of the business of the churches and synagogues. The First Amendment is just as relevant today as it was when it was written."

• "Yes. But most of the country believes in freedom of religion. It will likely hurt those that make it an issue, except in the Bible Belt. You didn't ask about 2017 but was stunned that with all the issues Texas is facing, Patrick issued an interim study on Religious Freedom. Really?"

• "Yes, but obliquely. No one will openly admit to opposing the separation of church and state, but some will take actions that comport with having more God in the Capitol."

• "Not sure what this 'wall of separation' is. Those who are uncomfortable with the freedom of religious expression might think about becoming more tolerant."