For this week’s nonscientific survey of insiders in government and politics, we asked about the impacts of the Oregon college mass shooting and a petition from UT-Austin professors on implementation of campus carry in Texas.

We kicked off this week's survey by asking the insiders to go back and evaluate Texas lawmakers' approach to relaxing regulations on carrying firearms on campus. Nearly half thought lawmakers went too far in their efforts while another 30 percent thought the finished product turned out about right.

We then asked about the effects of a couple of recent events on the progress of implementation of campus carry. Three in four of the insiders did not think the Oct. 1 mass shooting on an Oregon college campus will cause any slowdowns in implementing the Texas law.

More than half of the insiders thought a petition against campus carry signed by more than 380 UT-Austin professors would spread to other campuses while just one in five thought the petition effort would prove an isolated happening. 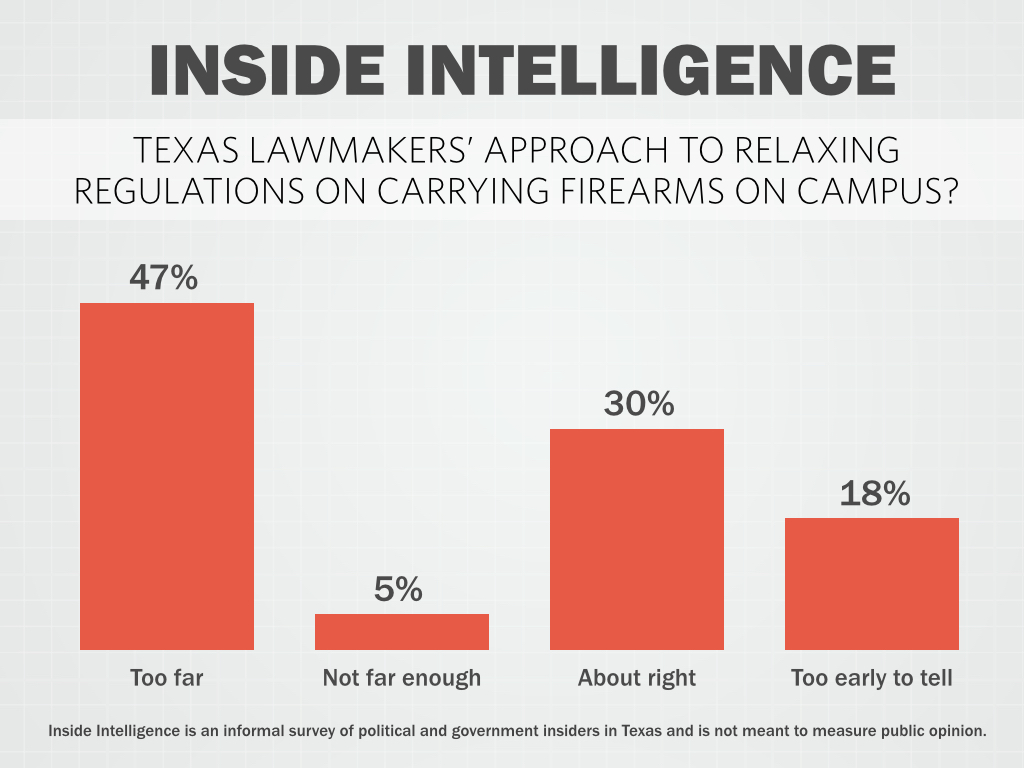 • "Have you ever seen an angry student? Usually, worked up over an issue in class or it's the A student who received a B+ that I fear the most."

• "Sure, put more guns on campus and let the SWAT team figure out who the bad guys are."

• "This whole campus carry thing is a high-stakes experiment with human life. There are bound to be some tragic results, but maybe some offsetting heroic events, too. It will be a decade or more before even an objective person can definitively say whether it was a good idea." 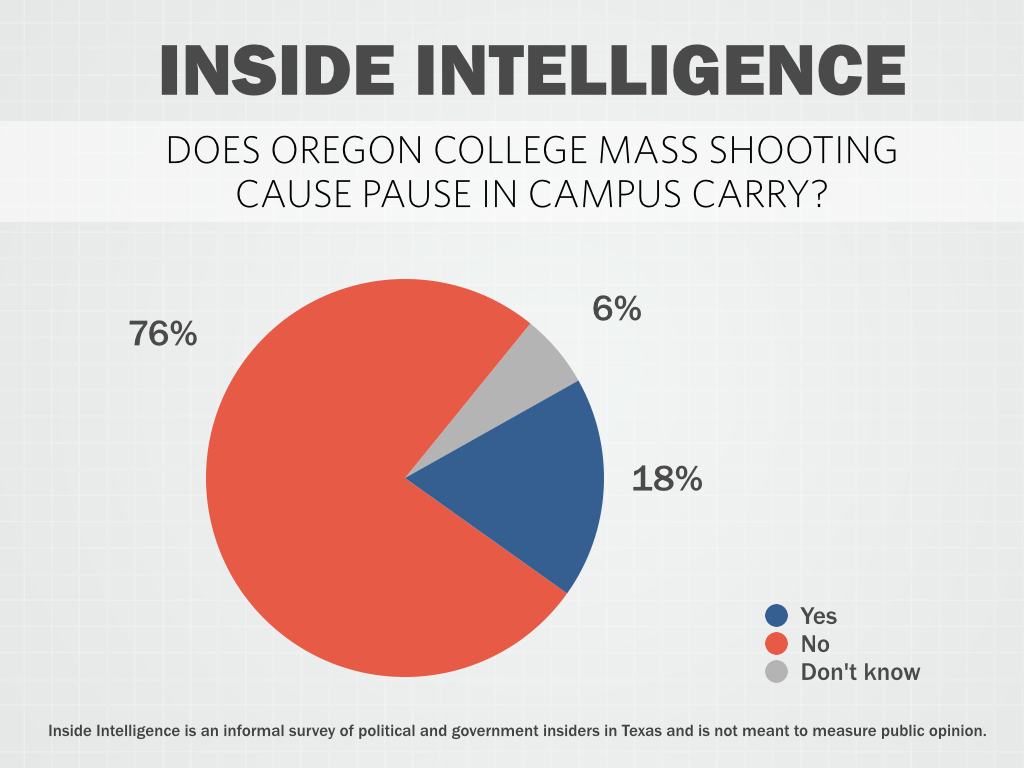 Does the most recent mass shooting at the college campus in Oregon cause a pause in implementation of campus carry?

• "In 2013 (during session no less!!) a person stabbed at least 14 people at a Lone Star College campus outside Houston. I don't recall anyone calling for a ban of knives on Texas campuses as a result, so why would implementation of campus carry be put on hold?"

• "People in support of looser handgun laws (the Legislature) are not about to allow a slower implementation."

• "Were I a student, it would make me want to carry on campus. Perhaps these cowardly madmen would consider that they won't have an easy path to carry out their mayhem." 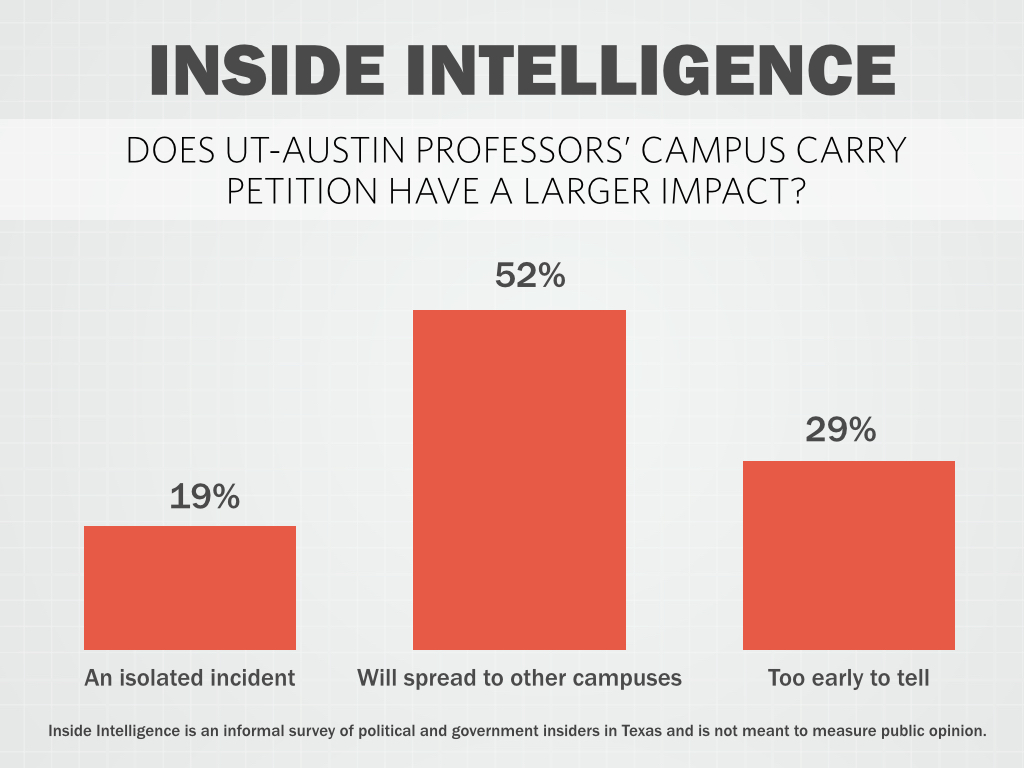 Evaluate the impact of the 320-plus UT-Austin professors who signed a petition to ban guns in their classrooms.

• "320 out of over 2,000 faculty members is impressive, but if they wanted to shape policy they should have been at the Capitol during session."

• "Nobody will care though. Although I liked my professors in college, it is hard to deny that they were relatively out of touch with reality."

• "All the professors want to ban guns in their classrooms. But here's a newsflash: they've probably taught a class where guns were in the classroom and nobody knew."

• "It will have the same impact as similar petitions during the Vietnam war and investing in South Africa during apartheid."

• "Let's talk to them after there is a shooting and they are sitting there with nobody or no way to defend themselves. Last time I checked, CHL carriers are some of the most responsible gun owners and carriers period." 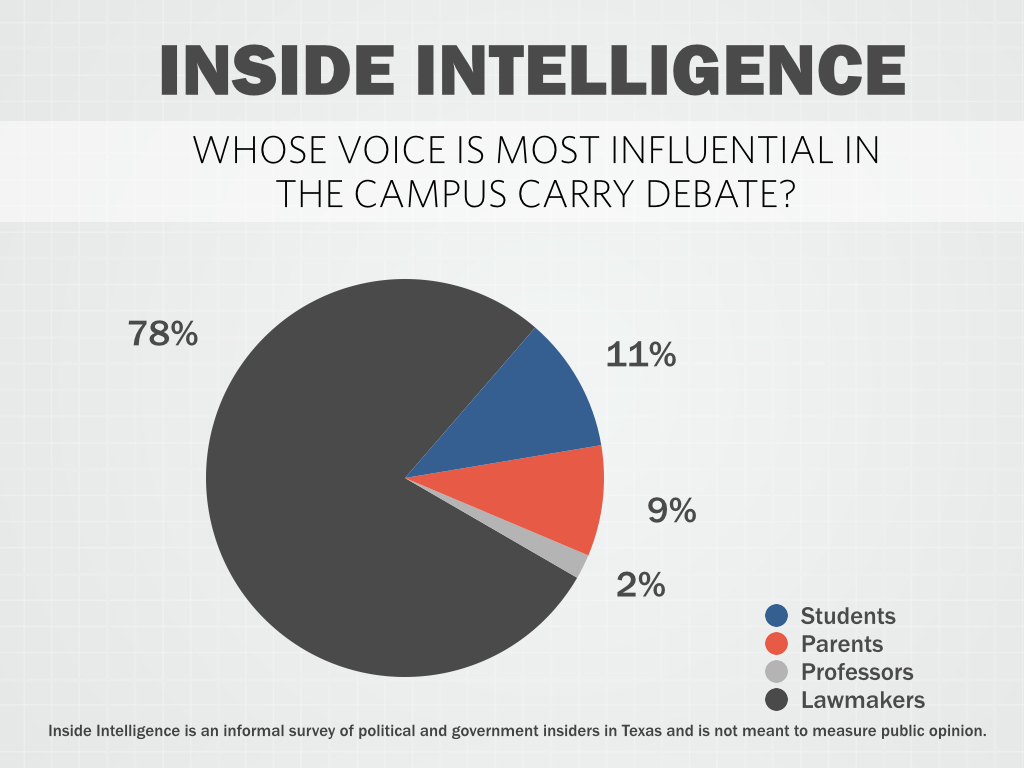 Which group has the most influence in campus carry debate?

• "Only one of these groups actually writes laws... they're clearly the most influential."

• "Lawmakers in Texas vote with whoever gives them the most money. If the professors, parents and students were all billionaires, then what they think would matter."

• "Unfortunately, the NRA has the most influence."

• "None of the above. The correct answer is the 5 percent of the electorate who vote in Republican primary elections."