For this week’s nonscientific survey of insiders in government and politics, we asked about Ted Cruz's influence on the Hill and the departure of House Speaker John Boehner.

With Cruz pushing the leadership of his party earlier this week not to continue funding the government as long as money remains for Planned Parenthood, we began by asking the insiders whether Cruz benefits from another government shutdown.

Slightly more than half said Cruz doesn't benefit from a shutdown with another 44 percent saying he does.

We moved on to ask a few questions about what a post-Speaker Boehner world might look like. Nearly two-thirds of the insiders thought his departure increases the influence of the Tea Party among House Republicans while 56 percent thought the task of Boehner's successor in leading House Republicans would be tougher than it is currently.

We closed by asking which Texas politician benefits most from Boehner's departure. On this, the insiders were evenly split with U.S. Rep. Jeb Hensarling, R-Dallas, and U.S. Sen. Ted Cruz, R-Texas, each cited by 30 percent of the insiders. House Majority Whip candidate Pete Sessions, meanwhile, was named by nearly one in five of the insiders. 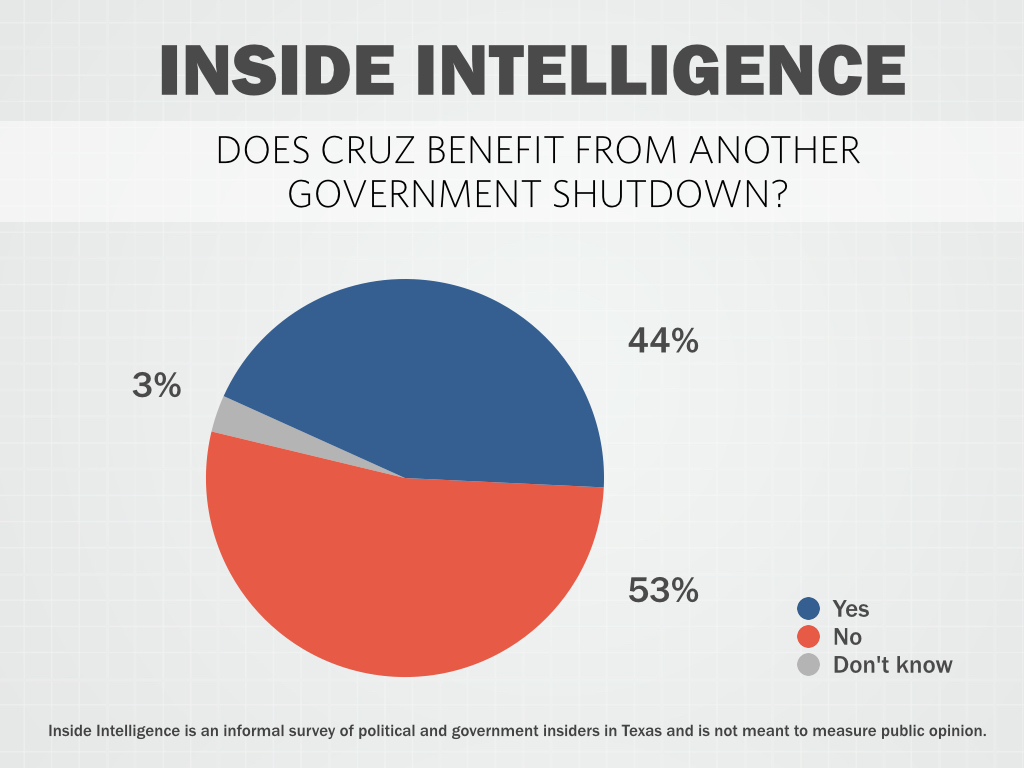 Does Ted Cruz benefit from engineering another government shutdown?

• "Great ideas wrong tactics, like Trump. Both could benefit from reading historical figures like LBJ, Tip O'Neil and Ronald Reagan."

• "Define benefit. Does the irrational element of the GOP eat it up and fawn all over Cruz? Yes, of course. Will it lead to Cruz becoming president? No, of course not."

• "To those for whom shutting down the government permanently is a good idea, even a short-term shutdown is something to be praised."

• "It depends on how it is communicated. The fact is if a spending bill is passed and vetoed by Obama then he shut down government. The GOP problem is getting its message out. Can Cruz do it? Because the Republican leadership can't or won't."

• "Shutdown is irrelevant to him. The key is taking a lead on the issue, which he is doing." 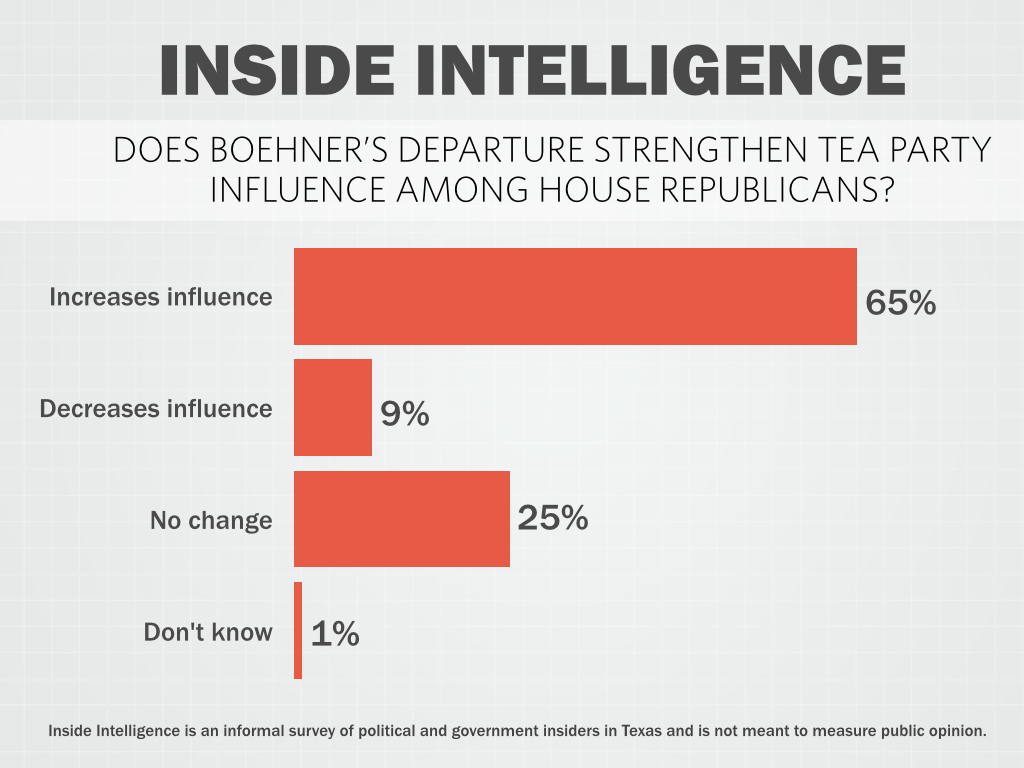 What does John Boehner's departure do to Tea Party influence in the House GOP conference?

• "In the short term it will decrease it as it will allow the next Speaker to govern and avoid another government shutdown. In the long term the Tea Party's power will increase as this gives them more opportunity to recruit candidates and challenge a newly elected Speaker."

• "It may increase it slightly, but McCarthy is a Boehnerite, really."

• "I'd love to see one of the 'Freedom Caucus' guys run and get his ass handed to him. Maybe then those guys will understand the maths."

• "Boehner is only the first casualty of GOP base outrage over failure of Congress to stop anything Obama wants. The media is totally invested in the Tea Party being impotent, and will ignore this story."

• "Boehner's exit and McCarthy's ascension to Speaker will make it clear that the there is no way to overcome the lack of a veto proof Senate and a Democrat president. McCarthy won't be able to overturn Obamacare or defund Planned Parenthood either." 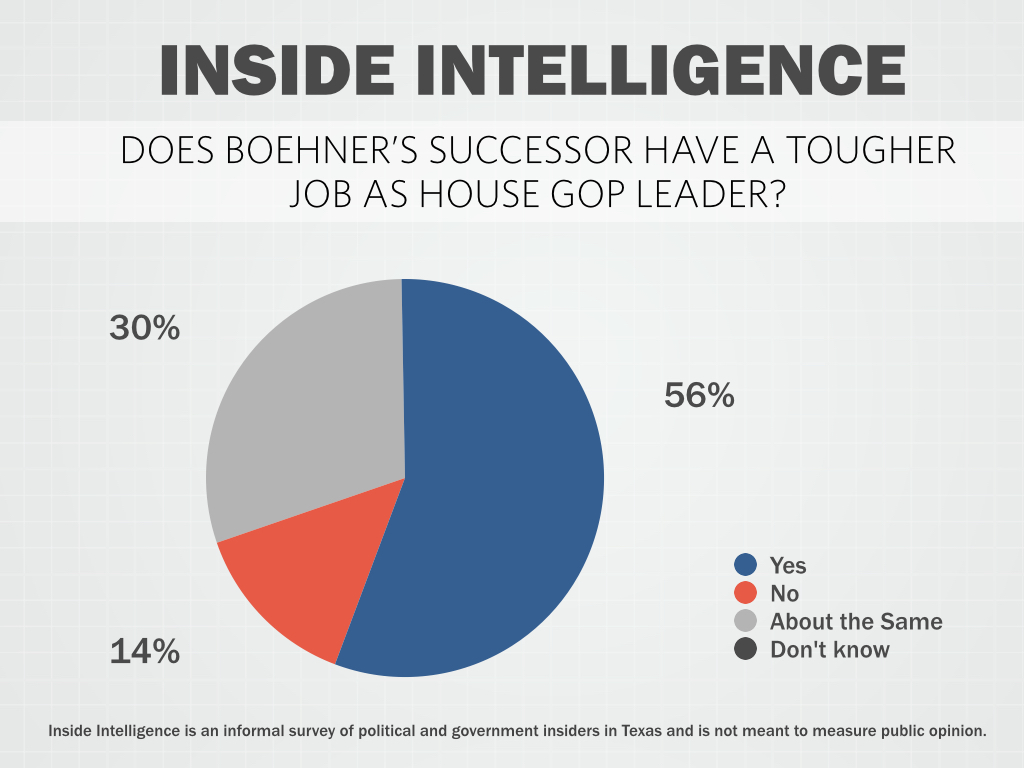 • "They have gained so much power that in-fighting has become their only real option. Reminiscent of the Democrats of the 60's and 70's in the South."

• "Since Boehner's name is already mud, the plan is for him to pass all the bad bills to give McCarthy a clean slate."

• "We're headed to a legendary case of 'the grass is always greener.' The new Speaker will be expected to rage against the machine, but when faced with the prospect of anemic fundraising and losing the House he will be forced to make deals and move bills, thereby disappointing his supporters."

• "McCarthy is a leader and speaks conservative and understands the constituency. Boehner and Cantor spoke corporate language, not voter language. If McCarthy did not learn from their mistakes and lack of leadership, his tenure will be short lived."

• "It was easy back when Jim Wright was in charge!" 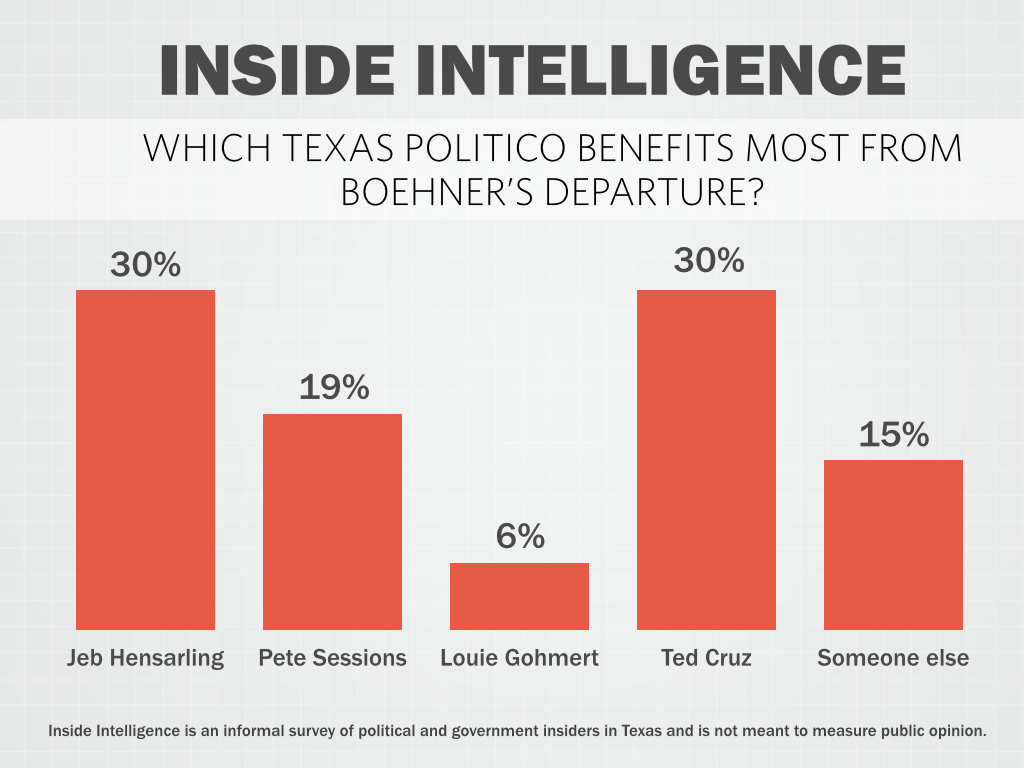 Which Texas politico benefits most from Boehner's departure?

• "Ted takes credit for getting rid of a RINO."

• "I want to say Cruz, politically, and Sessions, legislatively."

• "Where's Steve Stockman when his country needs him most?"

• "The GOP base smells blood in the water."

• "Sessions will move to the top."