For this week’s nonscientific survey of insiders in government and politics, we asked about the GOP debates, the politics of immigration and Sylvester Turner's frontrunner status in the Houston mayoral contest.

With two televised debates featuring the top GOP contenders for president now in the can, we asked the insiders whether the forums have been helpful in separating the contenders in the field from the pretenders. Nearly three in five agreed that the debates have been helpful on that front.

The early consensus after that second debate was that former Hewlett-Packard CEO Carly Fiorina was the candidate who most helped her cause. So we asked the insiders how Fiorina might fare in Texas, assuming that she still has an active campaign when that primary rolls around.

Close to half set Fiorina's ceiling at 20 percent support in the primary, with another quarter of the insiders thinking she could poll as high as 30 percent.

We then queried the insiders on the long-term impact on the GOP of the hard-line stance taken by frontrunner Donald Trump and others on the issue of immigration. On this question, a clear consensus emerged with four in five of the insiders saying the party is helped in the primary but hurt in the general election.

Finally, we turned our attention to the Houston mayoral election where the TV ad wars are just getting started. We asked if state Rep. Sylvester Turner should be considered the frontrunner in the race. A solid majority of 55 percent thought so with another 25 percent saying it was too early to tell. 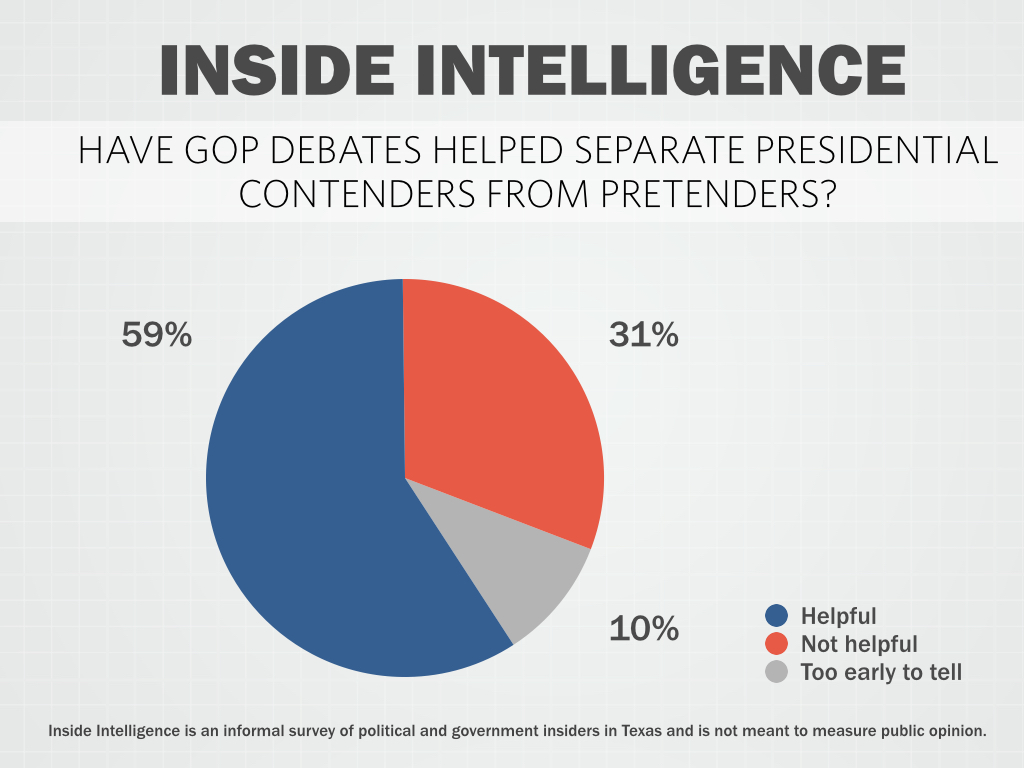 With two debates now in the history books, do you think these forums have been useful in separating the contenders from the pretenders among the GOP presidential hopefuls?

• "CNN version did the country a disservice by focusing predominately on controversy between the candidates. Silly me thought the purpose of a presidential debate was to facilitate a discussion of critical issues facing our country that would serve as a guide to the voting public prior to elections."

• "The most helpful was not televised. Trump decided to NOT attend the Heritage Fdn. event — after he'd committed to be there. Was he ready for tough questions? Or not?"

• "The CNN debate reminded me of a WWE event and just as substantive."

• "Debates aren't ideal screener devices, but they're better than total money raised — the only real alternative." 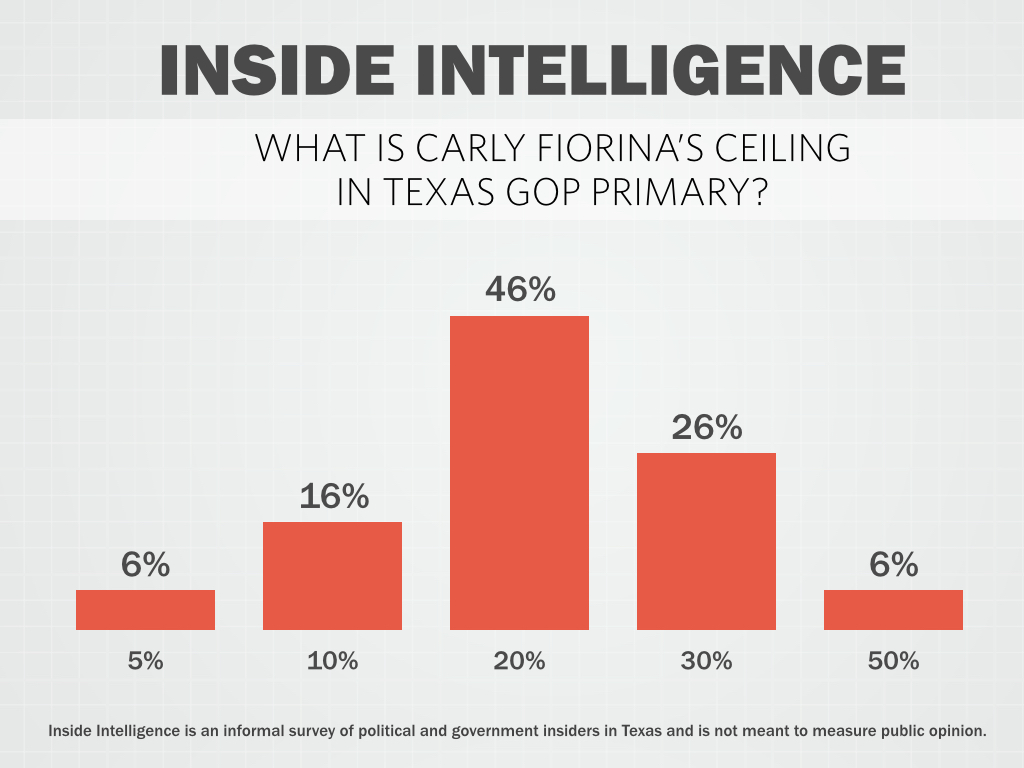 What’s the ceiling for Carly Fiorina in the Texas presidential primary?

• "Lots of folks searching for someone who can get through the primary and actually win in November, 2016. Miles to go. Interesting that Ms. Fiorina is polling so poorly among female voters."

• "Carly is the vehicle that'll be used to crash Trump's party. If she doesn't succeed, there is NO Texas in her future."

• "Let me think. She's running on a platform that she was a good business leader. And as a business leader, she gave away 1/2 of HP's printer business to get 1/2 of a bad computer business. And got fired. Who thinks that's a good qualification?"

• "She will be the surprise of this election..." 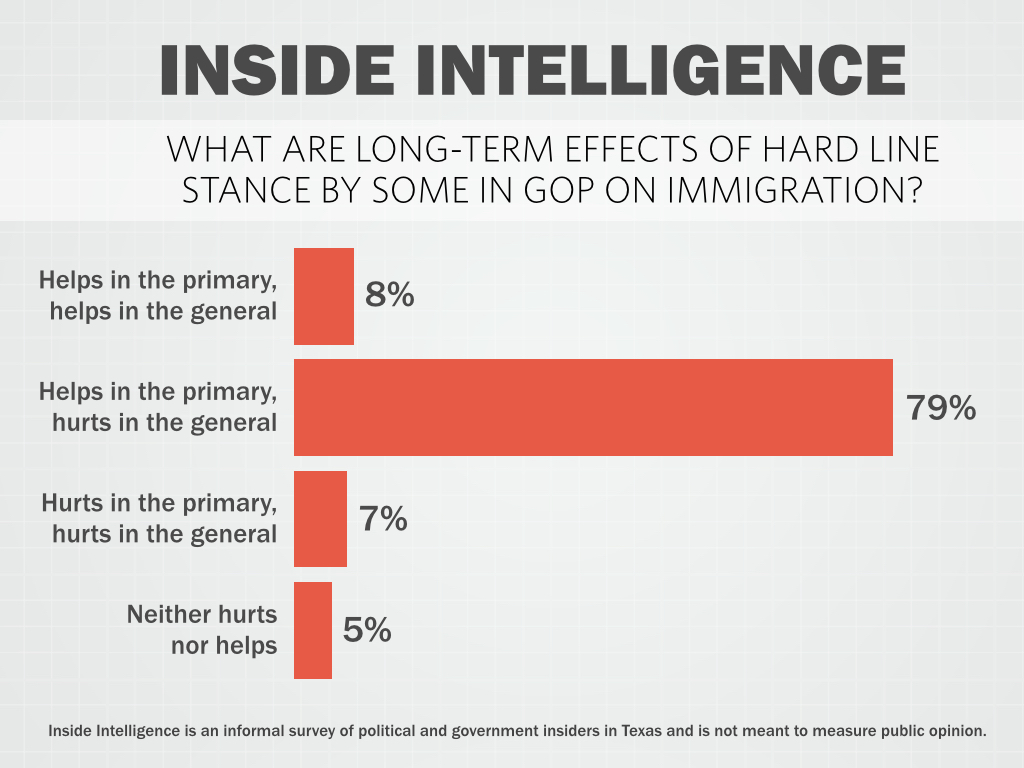 Speaking in Houston this week, Jeb Bush slammed the hard line stance of GOP frontrunner Donald Trump on immigration. What’s the ultimate consequence for the party of hewing to a hard line on this issue?

• "The 'Great Conundrum' for the Republican party. How in the heck do you appeal to the right wing faithful/primary voter, and have a prayer in the General? 'Purity' may well result in a long dry spell before another R resides in the White House."

• "Go to the border and ask the American Hispanics — they want security. And they don't want to lose their jobs to illegals."

• "The GOP candidates need to stop talking about a sympathetic immigration policy being important for the purpose of attracting new voters and need to start talking about a common sense approach being beneficial the country and the right thing to do. Opening the big tent turns off about 30 percent of our primary voters. We've gone from nominating the primary candidate who can win in November to nominating the primary candidate who makes the party look self-destructive."

• "There's little general election damage if the GOP candidate is hardline on immigration but respectful to Hispanics. At least 85 percent of the public is worried about immigration." 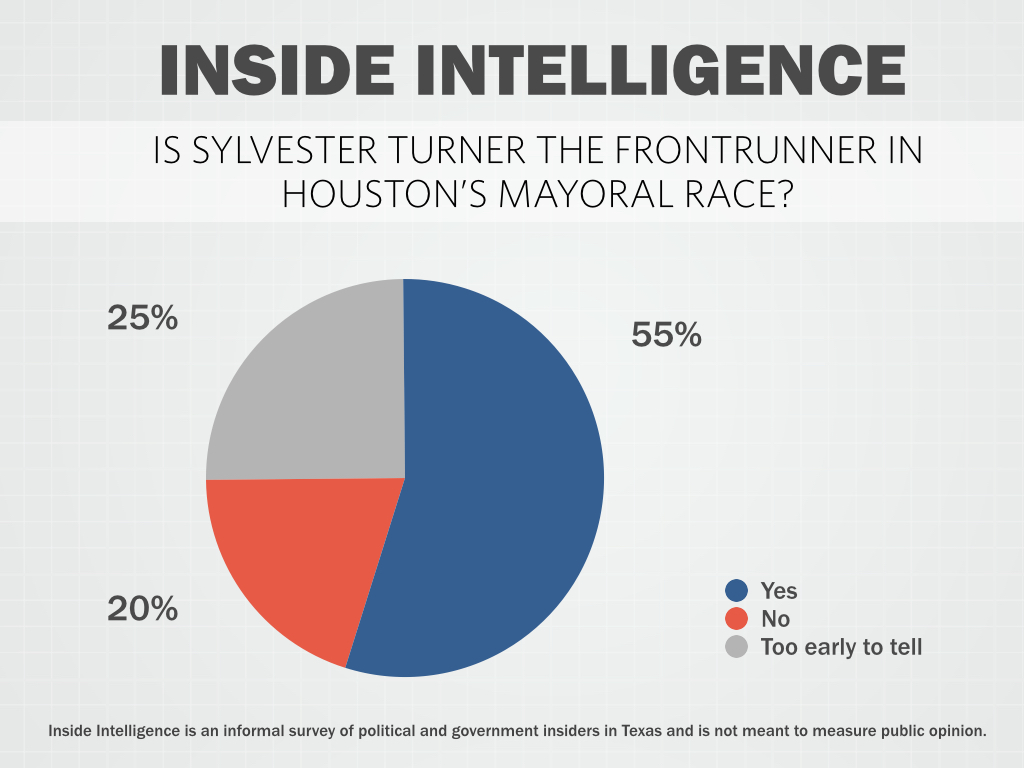 Would you consider Sylvester Turner the frontrunner in the Houston mayoral race?

• "He should have won the office 20 years ago. He has a decent shot at vindication this time around."

• "He is polling around 20 percent, which may not get him in the runoff. Blessed by Mayor Parker, he is seeking her fourth term. Houstonians have had enough with neglected core responsibilities and focus on social issues. Besides is there any interest group he has not pandered to?"

• "Easiest path in to runoff. Hardest path out."