For this week’s nonscientific survey of insiders in government and politics, we asked about what a defiant mood among the Republican electorate might portend for 2016.

No clear consensus emerged from the insiders with 37 percent agreeing that the defiant mood, as exemplified by the strong support being shown outsider candidates Donald Trump and Ben Carson, would spur a wave election next year. But 37 percent thought it's still too early to tell whether a large number of incumbents will be washed out in a wave.

Another 23 percent disagreed that a wave is coming in 2016.

We then asked where the support for Carson would end up maxing out in next year's Texas primary. Carson is already a well-known personality among the grassroots Republican voters, as witnessed by his second-place showing in the straw poll at last year's state party convention.

A fifth of the insiders thought he could win as much as 30 percent of the vote.

We then shifted to a couple of questions about some newsmakers on the state political scene. After a news report over the weekend on the time spent this summer by Land Commissioner George P. Bush on his father's presidential campaign, we asked the insiders if they thought he was spending too much time on the trail.

A total of 44 percent said yes with 36 percent saying no.

And on the prospects of finding a long-term funding solution for the Texas Racing Commission, a majority of the insiders thought lawmakers would kick the can down the road instead of finding a long-term solution. Another 28 percent thought the agency would cave in its confrontation with Republican lawmakers who are upset about the decision to authorize a new form of gambling on historical races. 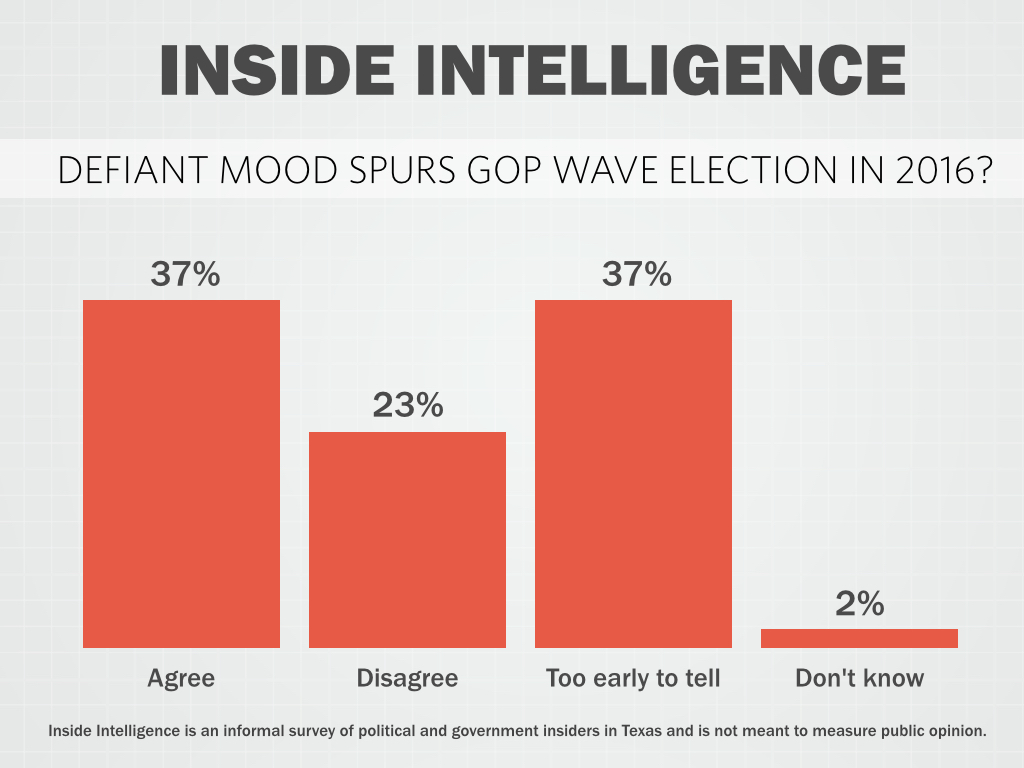 An increasingly defiant mood among the GOP primary electorate leads to a wave election in 2016. Agree or disagree?

• "Democrats have nothing to worry about. However, there's a civil war brewing in the Republican Primary. Incumbents are warned; come out swinging like there is no tomorrow or you'll be joining the same lobbyverse you detest."

• "Defiant is such a great descriptor and replacement for 'angry.'"

• "It's difficult at this stage to tell the difference between saying you want to throw the bums out and actually following through once you enter the ballot box."

• "Republicans are where Democrats were when they nominated President Obama. They are rebelling against their party's expectations." 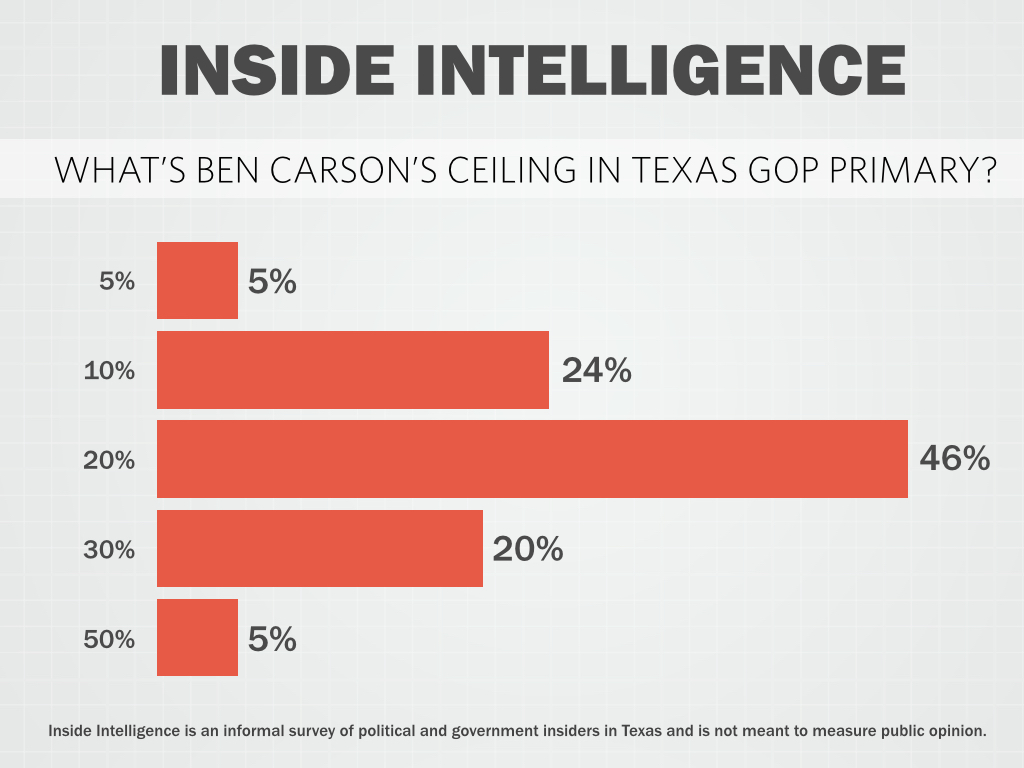 What’s the ceiling for Dr. Ben Carson in the Texas presidential primary?

• "Dr. Carson's luck runs out in Texas. This is Cruz Country."

• "I reject the premise that Carson makes it to Texas."

• "He is a good and honorable man. He believes strongly in America compared to the current WH occupant. But, once the base finds out he is weak on the Second Amendment, he will drop like a rock."

• "Depends on whether Trump is still flying high. Lot of competition from Cruz, who'll have an organization."

• "The first debate closing statement has taken Carson to No. 2, but as voters get a closer look, they'll see his lack of experience as a weakness. Foreign policy is too messed up to elect another novice." 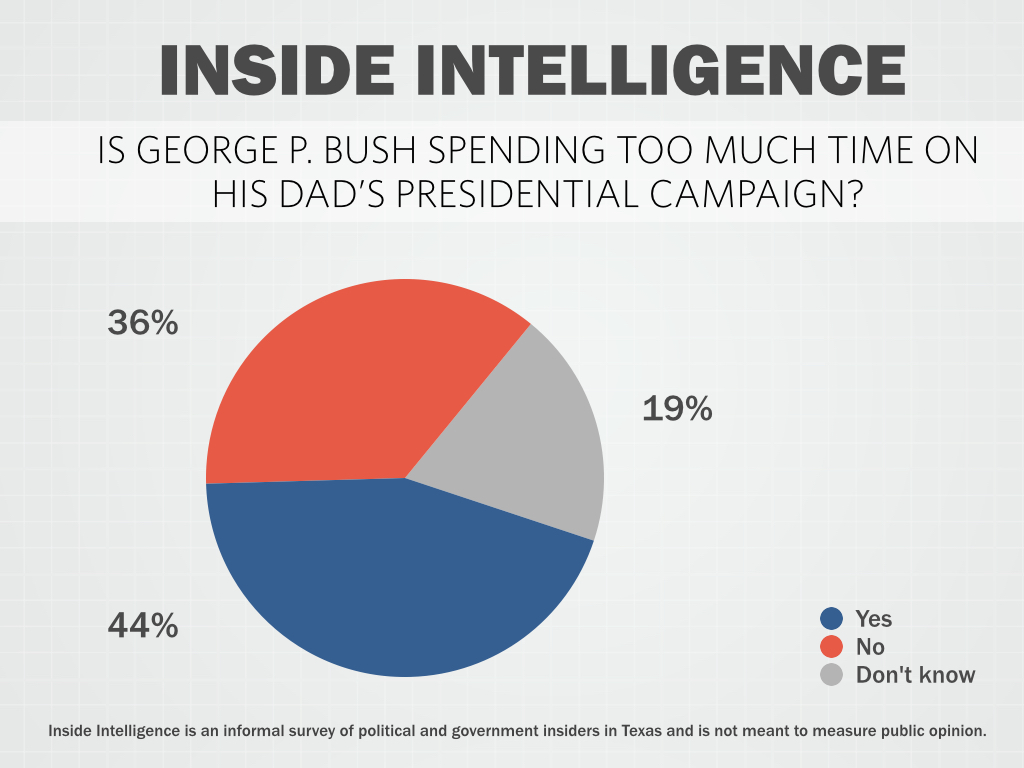 Is George P. Bush spending too much time on the campaign trail stumping for his father?

• "No one in Texas cares what the Texas Land Commissioner does with his time. Hell, no one knows what the Commissioner actually does for the state. Mijito (little-son) is doing good by helping his dad. Voters don't like mal-hijos (mall - eee - hoes)."

• "Yes, but... It's not like the job is that difficult. Remember, Jerry Patterson was able to do it without disastrous consequences."

• "He's coming across as in a big hurry, too ambitious, and thin-skinned to boot."

• "This is a resume filler stop on the way to Governor race, and I am OK with that." 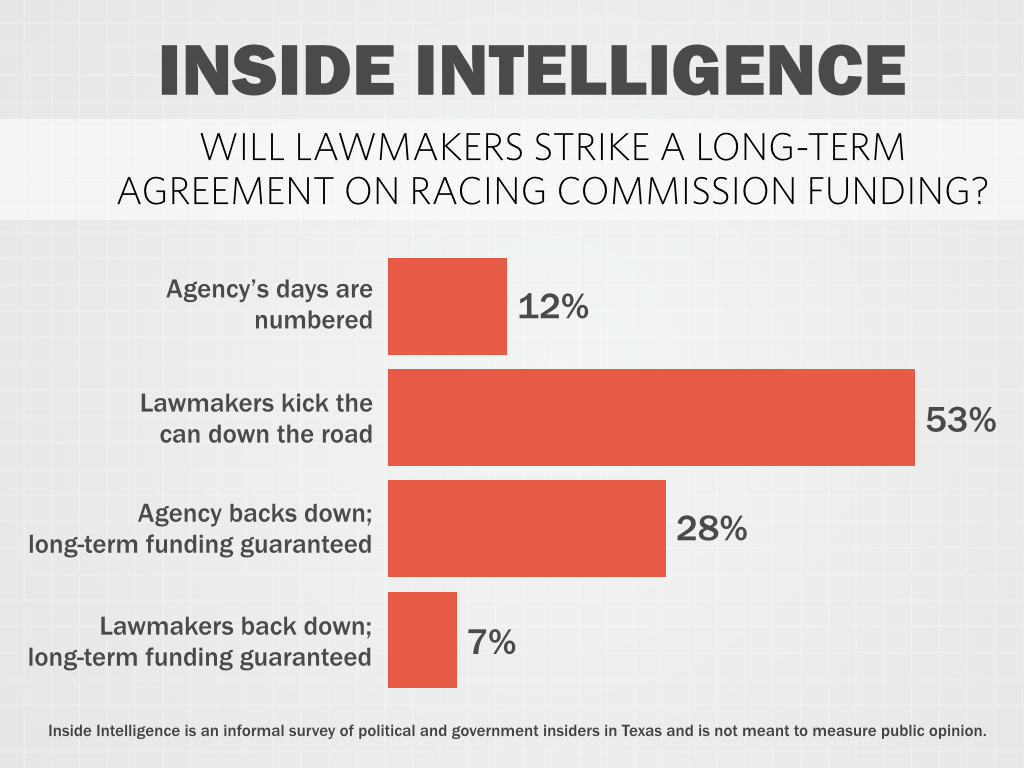 Will lawmakers find a long-term solution to the Racing Commission funding conundrum before a three-month temporary reprieve expires?

• "Remember that time you had a temper tantrum and your mom gave you the eye? Similar situation... Senators Nelson and Huffman just gave them the eye. Oh, and dad is holding the belt."

• "Nothing I've seen from either side indicates a willingness to back down, even if just a little to make nice."

• "Of course not. This now gives folks an issue to campaign on and raise money. What a windfall for the pols and the fundraisers and our crowd."

• "Gov. Abbott needs to replace members in order to rein in the rogue agency. Eliminating a government agency would be a welcome miracle."

• "Next session the Lottery Commission or TDLR will have horse racing duties."