For this week’s nonscientific survey of insiders in government and politics, we asked about how the endgame on the current school finance challenge might play out.

A little more than half — 53 percent — didn't think the Supreme Court will end up overturning the lower court decision that found the school finance system unconstitutional. Another 40 percent thought the Court will overturn the lower court's ruling.

A little less than half — 46 percent — believed that a finding that aid is being unequally distributed to schools is more likely to be upheld. Just 17 percent thought it more likely that the finding that schools are being inadequately funded will be upheld.

And for the final question, nearly 80 percent agreed that the system for funding public schools needs to be reworked. 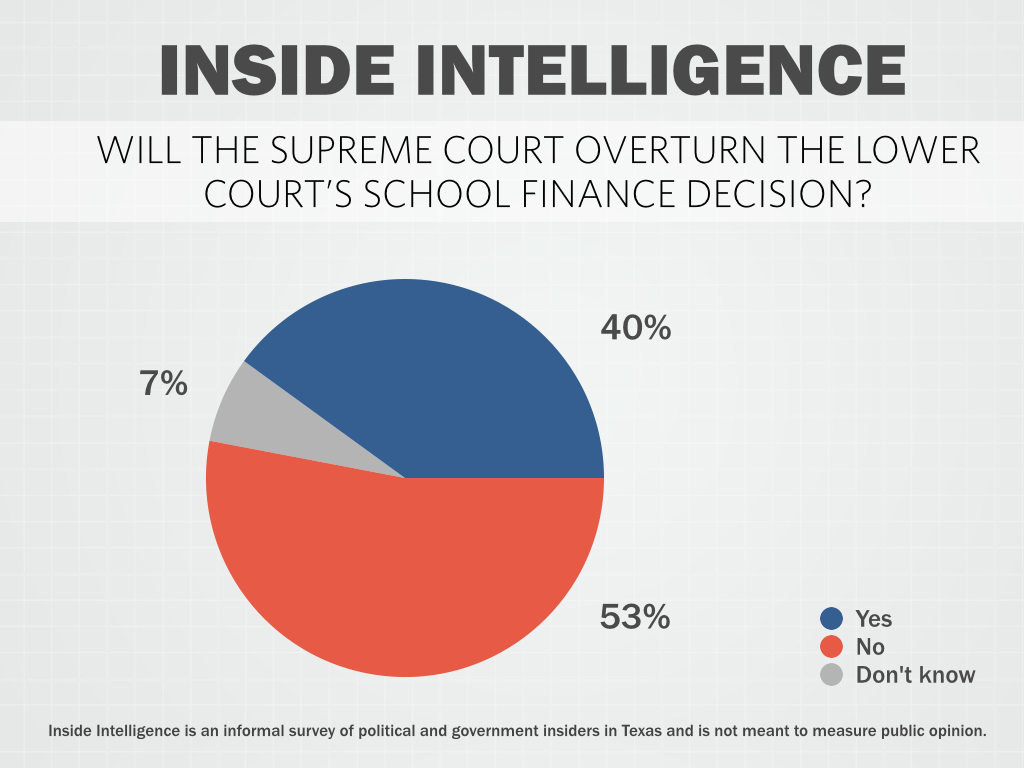 Do you think the Texas Supreme Court will overturn the district judge’s opinion that the state’s school finance system is unconstitutional?

• "Part but not all of it. Texas has never won an education lawsuit at the Supreme Court."

• "In some parts yes, and in some parts, no. It seems obvious that the statewide property tax issue is present, but it's anyone's guess how they will deal with the equity/adequacy questions."

• "It is difficult to say. One strong argument against the schools is that because we have lowered the standards and basically abandoned any accountability we have the irony of the districts arguing they don't have enough money to properly educate children while TEA tells us that the vast majority of schools are performing admirably, that the graduation rates are excellent and all is well."

• "Nothing is ever simple. The SC will do something that will confound everyone."

• "If they follow precedents, then the school finance system is toast. But if they follow the way the Republican Party is going (don't forget — all these judges must face re-election), then they'll let the Lege do what it wants." 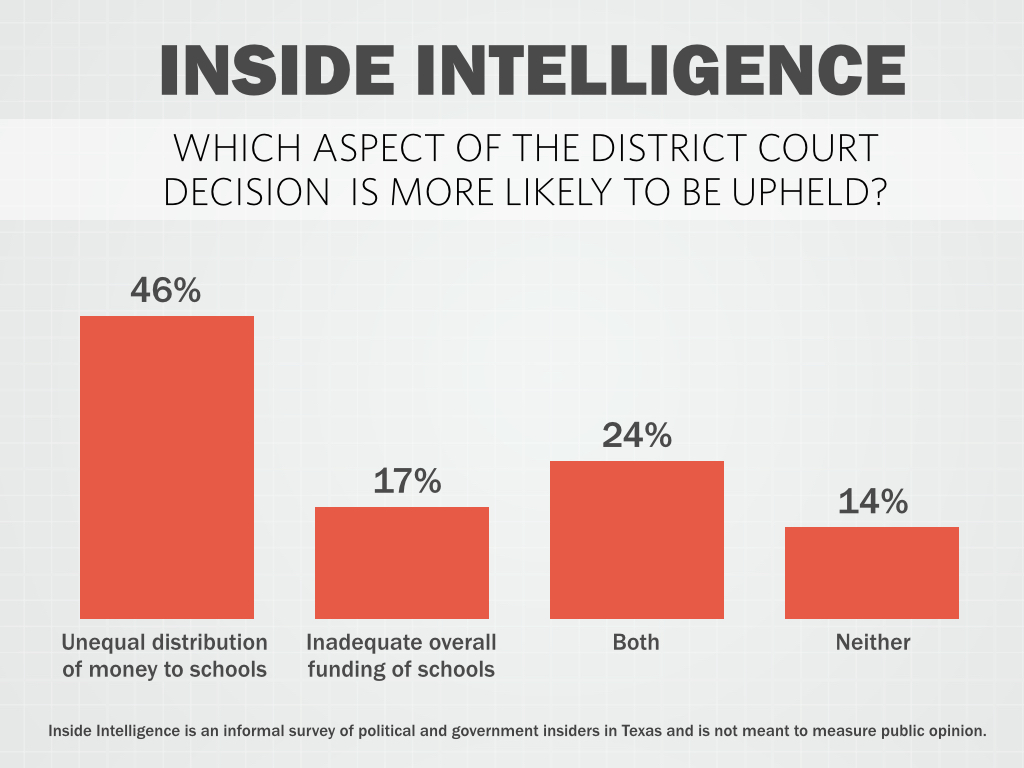 Which aspect of the district court's decision is more likely to be upheld by the Supreme Court?

• "History tells us that courts tend to be concerned with the equitable distribution of money but that they tend to defer to legislative bodies on whether the system is adequate or not."

• "As in 2005, the Texas Supreme Court is more likely to support the district court's ruling on statewide property taxation than on equity or adequacy."

• "Virtually no court in the country has ordered increased funding per se. So, if this court does anything, it'll involve equity."

• "The only thing they will care about is Robin Hood."

• "The inequalities in funding are too obvious to be explained away. 'Adequacy' is subjective, but inequality is plainly demonstrable." 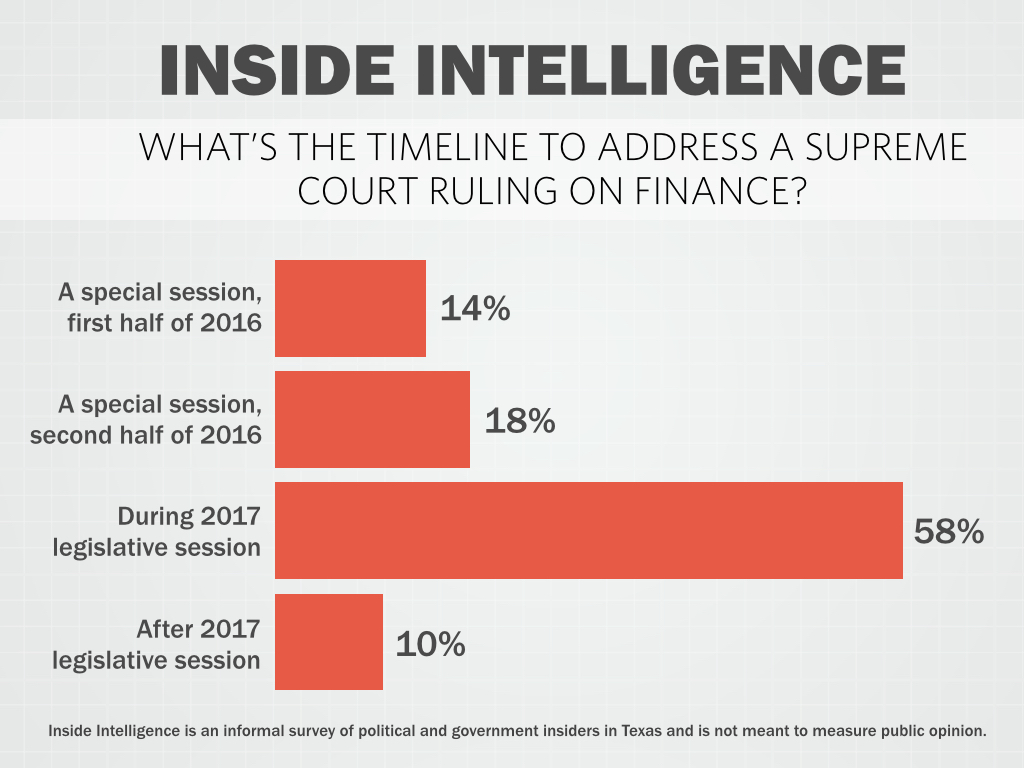 What's the timeline for the Legislature to respond to a Supreme Court ruling?

• "Ideally, it would be the first quarter of 2016 so schools could know the effects of the funding changes in time to renew contracts at the end of the school year and hire teachers for the upcoming year. But then again, legislators are politicians and since primaries are in the first half and elections in the second half of 2016, they'll probably wait until the 2017 session letting school children move up another grade without improving their education."

• "The Legislature will wait until any financial impacts can be considered in the context of the overall revenue and budget picture."

• "Actually, it will likely be never."

• "If necessary, they'll try in the regular, then get it done in a special during the summer of 2017." 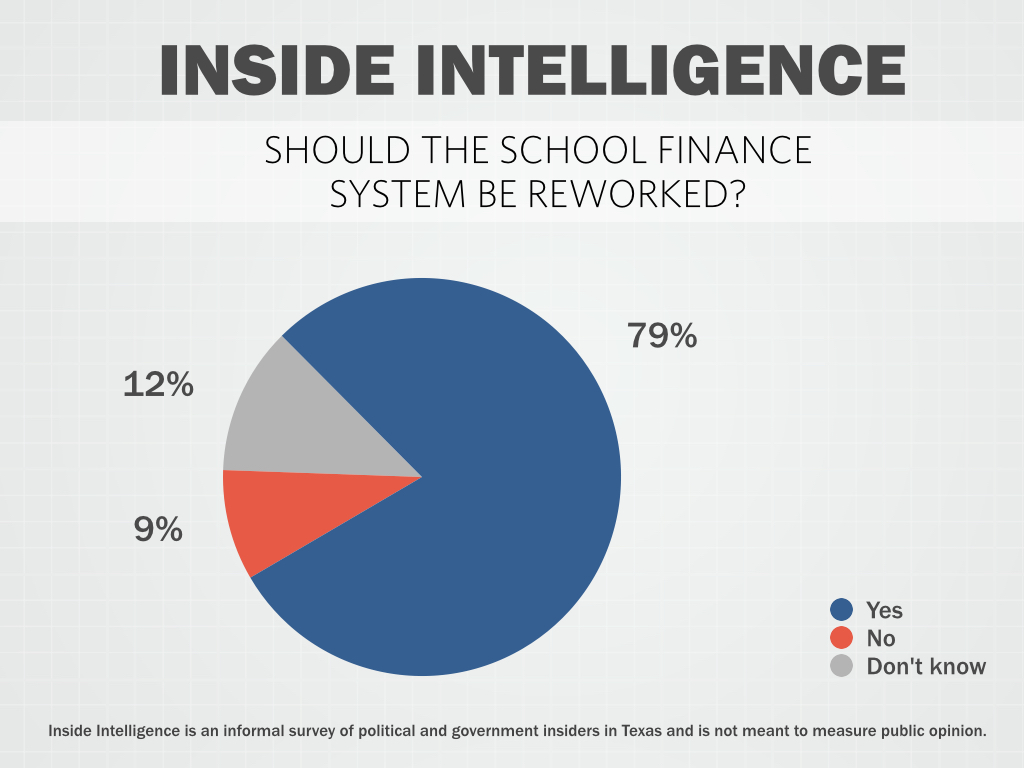 Do you think the state’s school finance system needs to be reworked, or should the courts and the Legislature leave it alone?

• "Good grief; what a poorly worded Q. Might as well have asked 'Is it farther to Dallas, or by bus?'"

• "It needs to be reworked, but it's the Lege's job to do so. My copy of the Texas Constitution doesn't grant the Courts authority to oversee public school finance."

• "It does need to be reworked to ensure both adequacy and equality — both of which are hard to establish given the convoluted process we have. But any improvements must be conditioned on the school districts accepting reasonable requirements for productivity, outcome based funding and accountability. More money or more equal money must produce results — or else."

• "Leave it alone OR encourage real efficiency, NOT a greater volume of dollars."

• "The current system clearly flunks on both adequacy and equity. But I'm betting this Supreme Court will let it stand. Because elections."