For this week’s nonscientific survey of insiders in government and politics, we asked about what a bear market for oil portends for Texas.

The price for West Texas crude spent a good chunk of this week below $40 per barrel, trading well below the $60 price from early summer and a far cry from the $100 oil of the spring and summer of 2014.

We began by asking the insiders how long this bear market might last. Just 10 percent thought prices would rebound by the end of this year. But beyond that, the insiders did not have a consensus view. Responses to the next three options — prices rebound in the first half of 2016, the second half of 2017 or sometime in 2017 — were clumped closely together.

The larger national story running parallel to the drop in oil prices has been volatility in the stock market in response to fears of a slowdown in the Chinese economy and uncertainty about when the Fed will begin boosting interest rates again.

We asked what effect all of that might have on the comptroller's revenue forecast and on the overall state of the Texas budget.

Nearly 80 percent of the insiders believed a revised forecast is coming while a slight majority didn't think the economic conditions would blow a hole in the state budget. 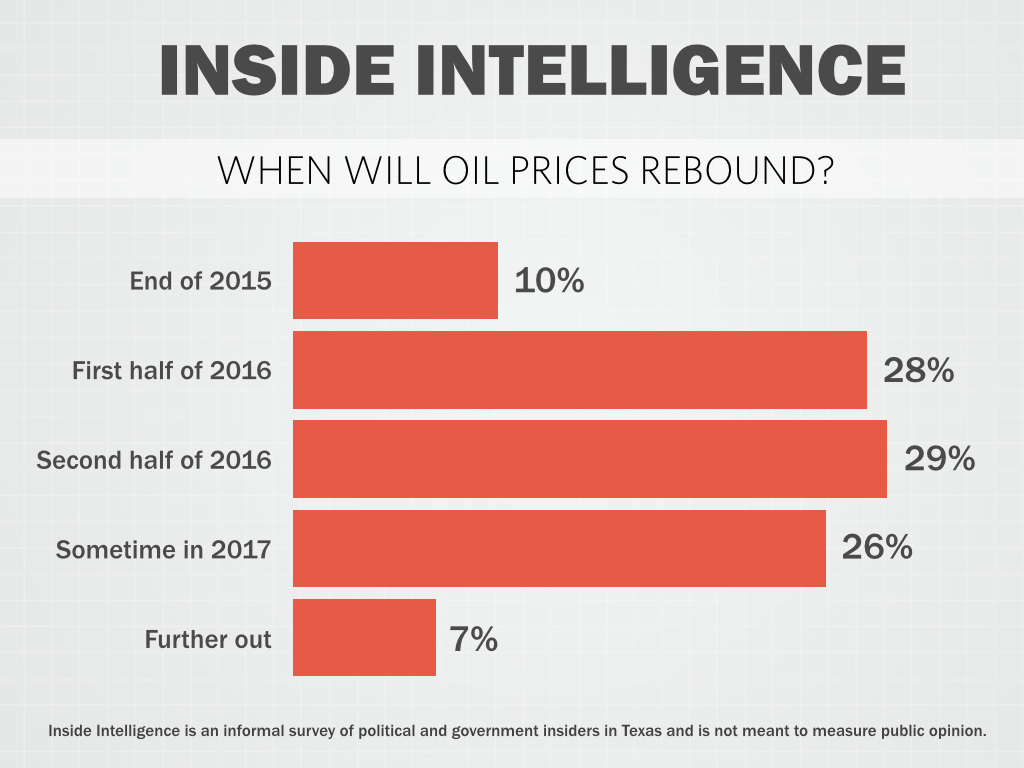 The price of West Texas crude dipped below $38 per barrel on Monday. When will prices rebound?

• "There is always a rebound when a commodity falls to an artificially low price."

• "We have to anticipate a big outbreak of hostilities in Mid-East in the final months of an 8-year presidency. And oil price increases will follow."

• "If I knew the answer to this, I wouldn't be lobbying."

• "Unless Third World demand picks up, there will probably be no price increases in the short run. After 3 or 4 years, shale oil production may run short, so price could pick up then. After, Texas producers are broke."

• "It actually depends on your definition of 'rebound'. If you mean $100 a barrel, that will take a long time but if you mean stabilize, it may be sooner." 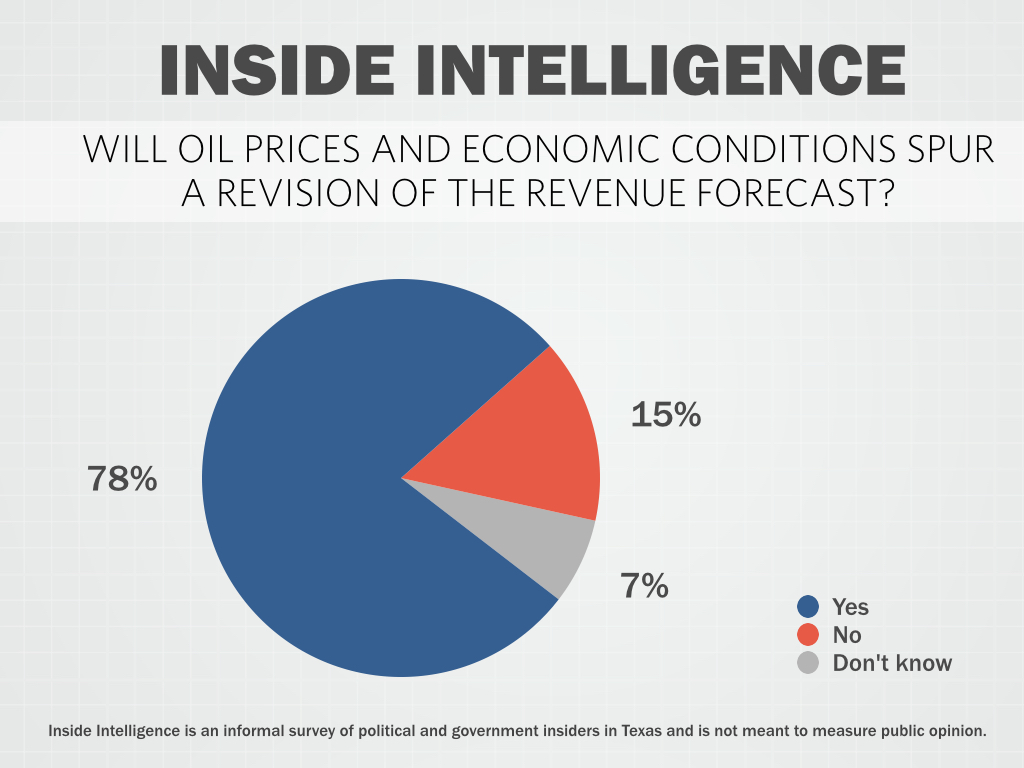 Comptroller Glenn Hegar has estimated oil will sell between $65 and $75 per barrel through 2017. Will the slowdown in oilfield activity and a possible slowdown in the U.S. economy force Hegar to revise down the revenue forecast?

• "Depends on sales tax but rainy day fund growth will slow down considerably."

• "Would be interesting to read the emails between Hegar and Railroad Commissioners."

• "The Comptroller left a cushion in the way he averaged the cost per barrel so I think his estimate will stand. Also, revising the estimate would not support the 'strong Texas economy' message."

• "It is more than the price of oil... It is the multiplier of all of the layoffs, their salaries, equipment, etc." 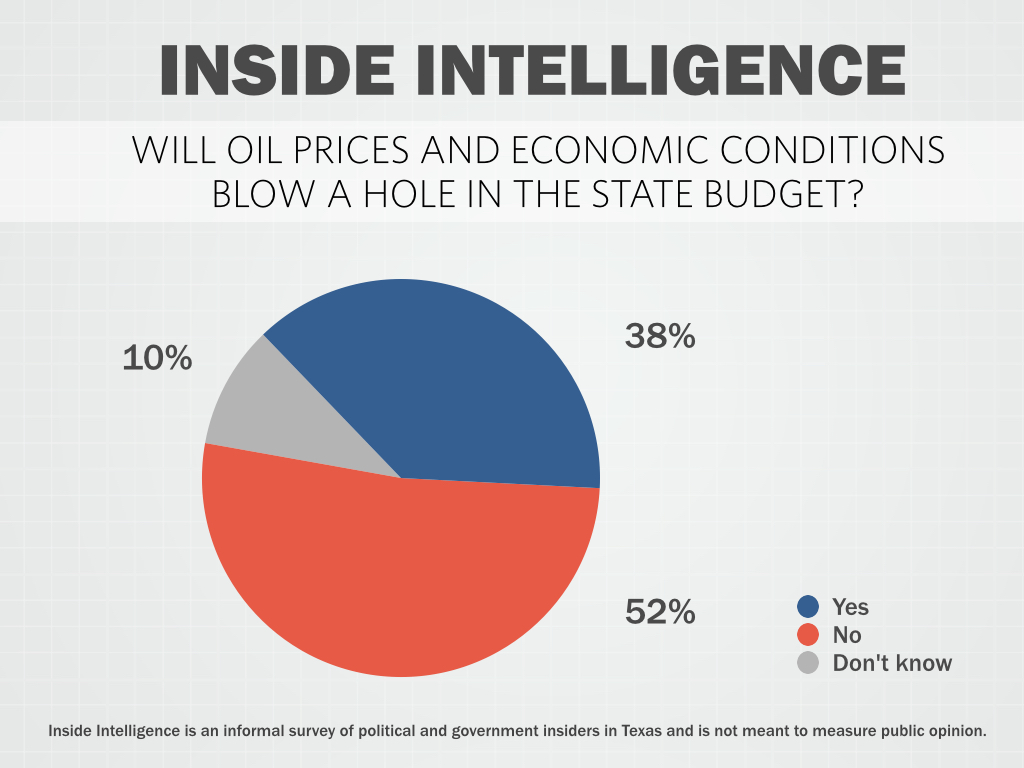 Thinking more apocalyptically… will a slowdown in oil production and a possible slowdown in the U.S. economy blow a hole in the state budget?

• "The feds will print more money and cities and counties will sell more bonds. The state will ride their coattails."

• "Until the Legislature takes a serious approach to generating new revenue streams, Texas will remain in a very precarious place financially."

• "NO. The only thing that will blow a hole in it is serious property value decline and sales tax crisis."

• "No. School finance will blow a hole in the state budget."

• "Sure, a real recession in the U.S. would blow a hole in the budget. But, for better or worse, they decided to sit on $18 billion in GR or Rainy Day Fund balances, so we could survive without slashing 16-17 spending." 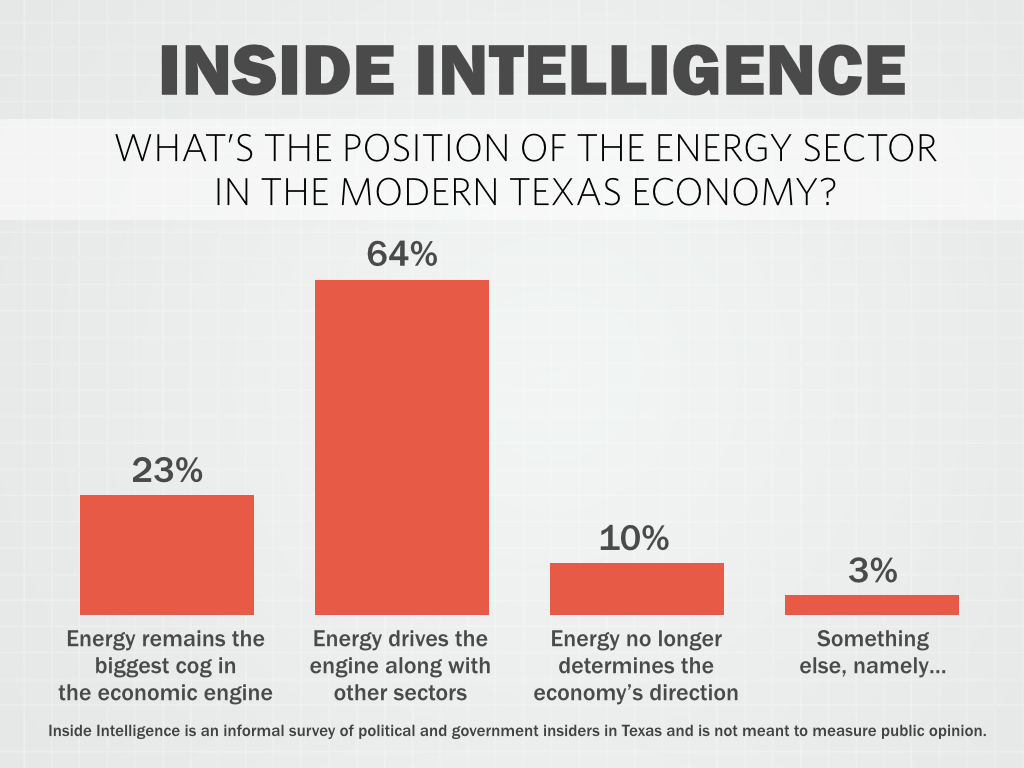 What best describes the role of the energy sector in the larger Texas economy?

• "It's as important as your arm is, and you don't want to cut it off either, but you could survive without it."

• "It is not as big a factor as it was, but fracking bloated the spending and tax side beyond the Lege's wildest dreams."