For this week’s nonscientific survey of insiders in government and politics, we asked about the zombie candidate — the presidential hopeful who can't seem to find support from direct donors or in the polls but who doesn't depart the field because of the backing of one or more super PACs.

Former Texas Gov. Rick Perry might be the first and best example in the current GOP field, but it's likely he won't be the last to see his or her trajectory as a candidate altered by the existence of an affiliated super PAC.

A slight majority of the insiders think this ability to keep a campaign going even after the official campaign accounts are empty is a bad thing. Just 18 percent think a super PAC's ability to animate an otherwise moribund candidate is a good thing. An equal number believe this phenomenon has its positive and negative aspects.

The rise of the zombie candidate could potentially alter a couple of basic tenets of U.S presidential politics that have become established in recent decades: the primacy of the early primary and caucus states, such as Iowa and New Hampshire, and the ability of the electorate to winnow out the field early through pre-primary polling.

We finished with a question about how long Perry will remain in the presidential race. Nearly two in five think he will make it out of Iowa but won't make it to the early primary contest in South Carolina. Nearly four in five don't think he'll be in the race by the time Texans vote in early March. 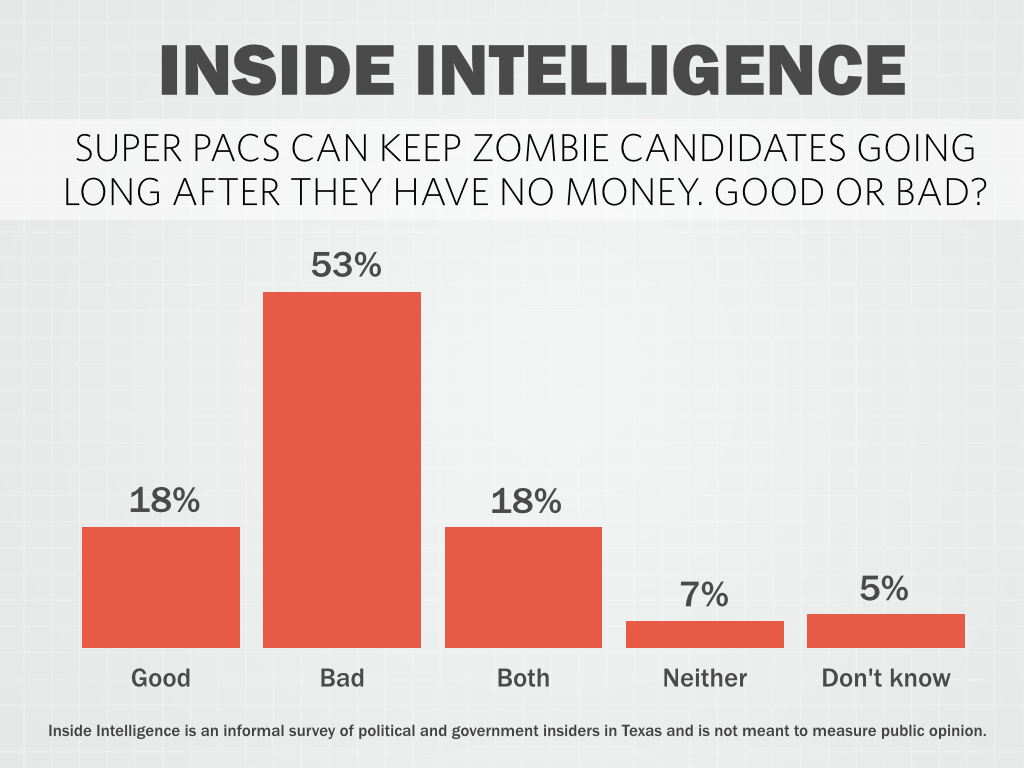 Super PACs can potentially keep zombie candidates alive for months after their own accounts are empty. Is that good or bad?

• "The sooner the herd can be culled, the sooner a real candidate can emerge over the Trump noise."

• "While we don't need rejects hanging around, but it sure does help give an unknown candidate a chance to run with the big dogs."

• "One of the best presidents of the 20th century was Truman. He nearly ran out of money on his campaign. Who knows how many other greats didn't quite make it far enough to show what they could do."

• "No limits, immediate disclosure would be a vastly better system."

• "Depends on the candidate. Some zombies need to die. Some deserve to be kept alive until they can prove they deserve a second chance." 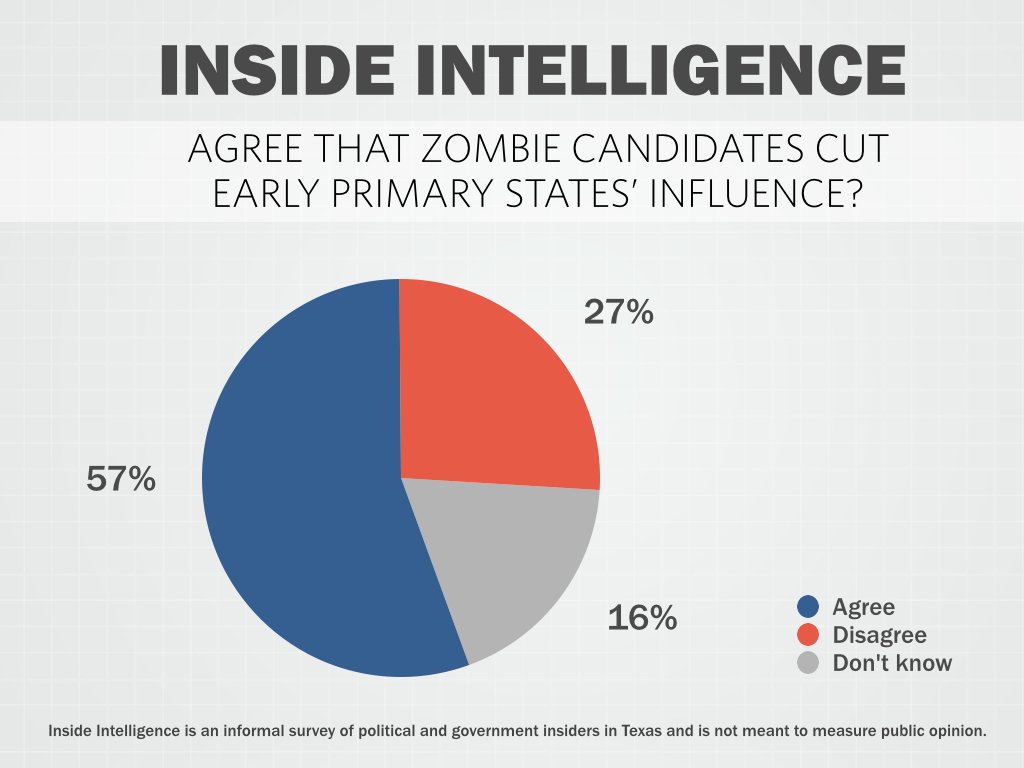 • "Just because the PACs waste their money on dead candidates does not mean they will influence the primary outcome."

• "Iowa and New Hampshire have been afforded too much influence for too long. Good riddance."

• "Yes, and this is a good thing. Why should Iowa or New Hampshire always get to pick the candidates? Texas has one of the strongest economies, one of the most diversified populations, and routinely gives some of the most money to presidential campaigns — it's about time this state got a say in who runs for office."

• "To some degree, but an uninformed electorate and sensational campaigns are to blame, too." 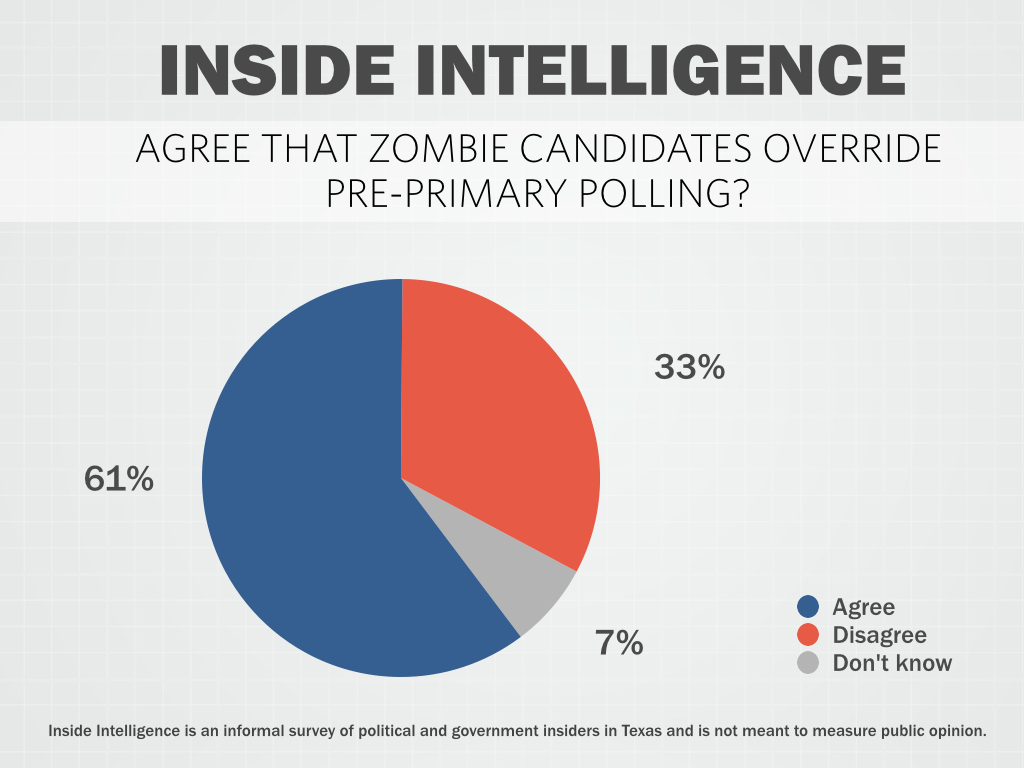 • "They will just be puttering away their money, but I guess the super-rich don't care."

• "At this stage in the race, polling is simply name ID. Until we get into November or December, nobody will be tuned in. A candidate sinking right now (or not rising) means nothing."

• "It's still early, check back in February."

• "Early polling is only for tabloid coverage and no serious person reads any 'go home' meaning into them. Even using them to pick 10 people for a debate stage seems questionable. At this point in 1975, Jimmy Carter was in low single digits in national polls."

• "The entire campaign finance system is now set up to enable rich donors to override most democratic processes." 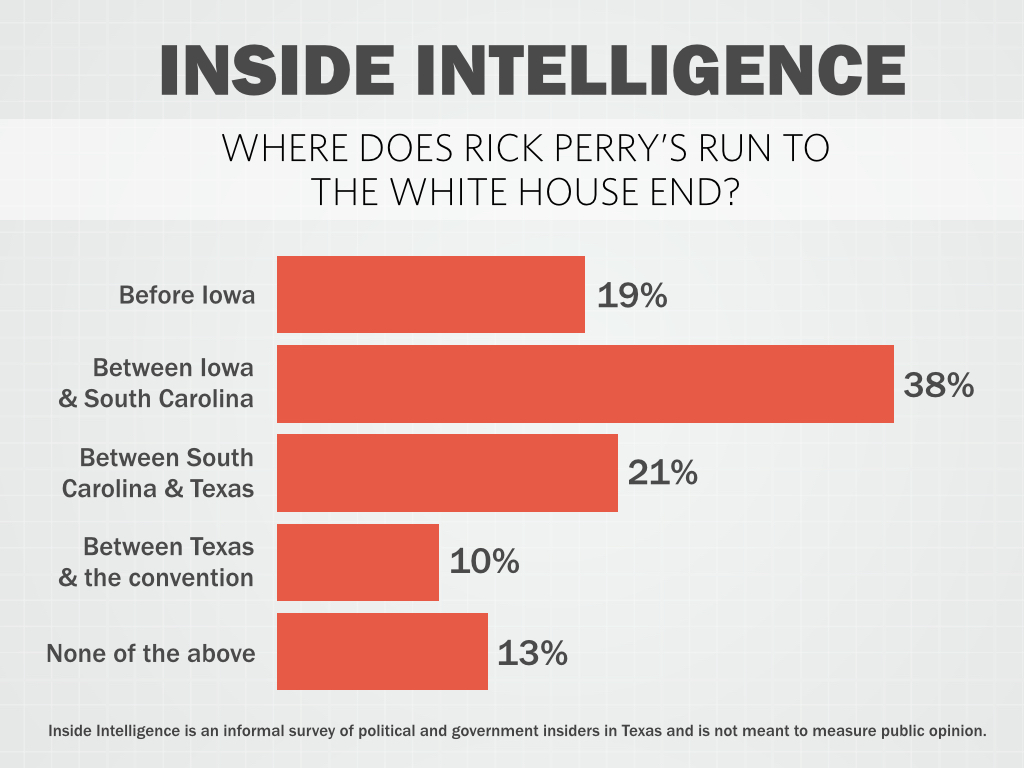 Where does Rick Perry’s run to the White House end?

• "RP wants to remain relevant so he can be in the mix/conversation for VP."

• "He's polling in the low single digits in Texas. He won't go through the embarrassment. He's done after Iowa."

• "It all depends on whether the super PAC can keep raising money at a level equal to (or even slightly less than) the burn rate. Even $17 million can go pretty fast when you are pushing uphill in multiple states. But if you can refill the fuel tank through those few super wealthy donors then you can keep going."

• "He won't have all the money he wants; but he'll have enough to stick around. He's running for second place or a Cabinet position at this point."