For this week’s nonscientific survey of insiders in government and politics, we ask how likely it is that the two Texas presidential hopefuls score invites to the first GOP presidential debate in Cleveland in early August.

The most popular choice? That both Ted Cruz and Rick Perry make the stage. That option is preferred by 44 percent of the insiders. Another 39 percent think Cruz alone is invited.

Just 5 percent think Perry is the only one of the two to make it the debate stage while 10 percent say neither is allowed to take part in the debate.

We then ask if Perry would have the criminal case that's been pending against him for about a year finally concluded before the Iowa caucus next year. He received a boost recently with one of two pending counts dismissed by an appeals court.

More than half the insiders, though, don't think the case is finally done by the time of the Iowa caucus. Nearly 40 percent believe Perry will be clear of it by then.

The next question attempts to gauge expectations on turnout in next year's GOP primary. In some quarters, the thought is that a potentially still competitive presidential nomination fight could spur a bump in turnout similar to what Democrats experienced in 2008 when supporters of Barack Obama and Hillary Clinton flocked to the polling places.

On this, 70 percent of the insiders expect turnout higher than the 1.4 million votes cast four years ago but not a record turnout. Another 14 percent forecast a record number of votes cast while 13 percent believe about as many votes will be cast next year as in 2012.

On the final question, 83 percent think Cruz runs for re-election to the Senate should he fall short in in his bid for the GOP nomination for president. 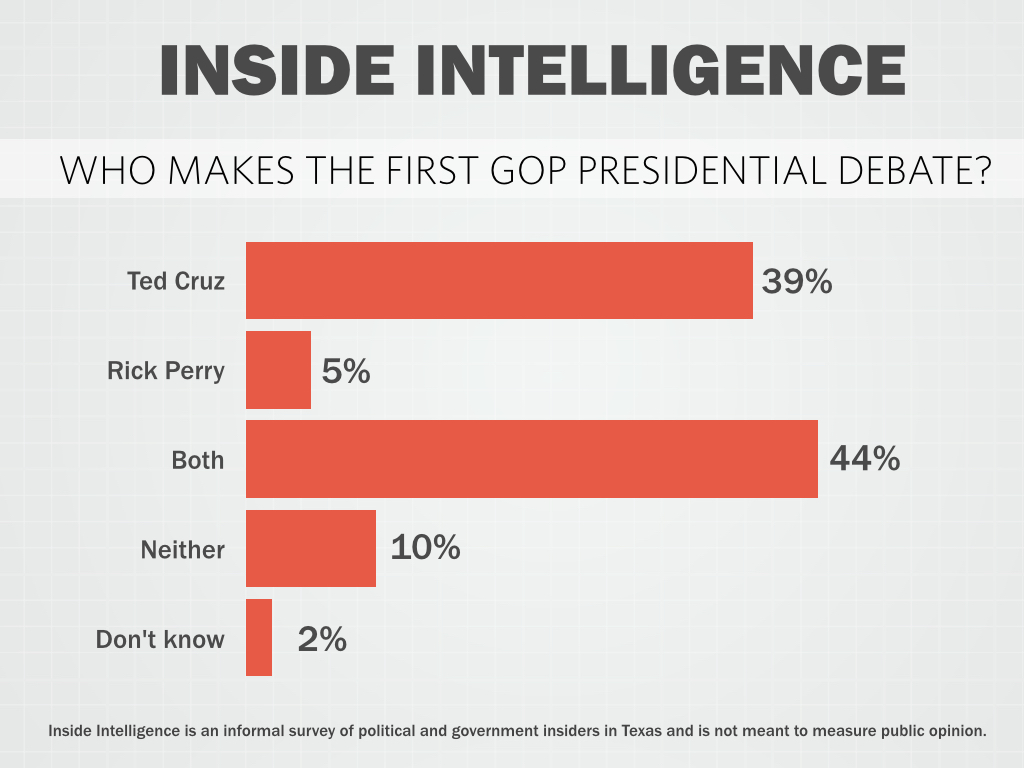 Who makes the cut for that first GOP presidential debate on Aug. 6 in Cleveland?

• "A presidential debate without a Texan is no debate at all."

• "Cruz is a better debater, but Perry is 'prettier.' If there is Texas fatigue, they will dump Perry and go with Cruz."

• "Cruz is in easily. Perry got some publicity by attacking Trump, but not enough."

• "Rick Perry is the only voice of reason, which means that the networks will likely leave him out!" 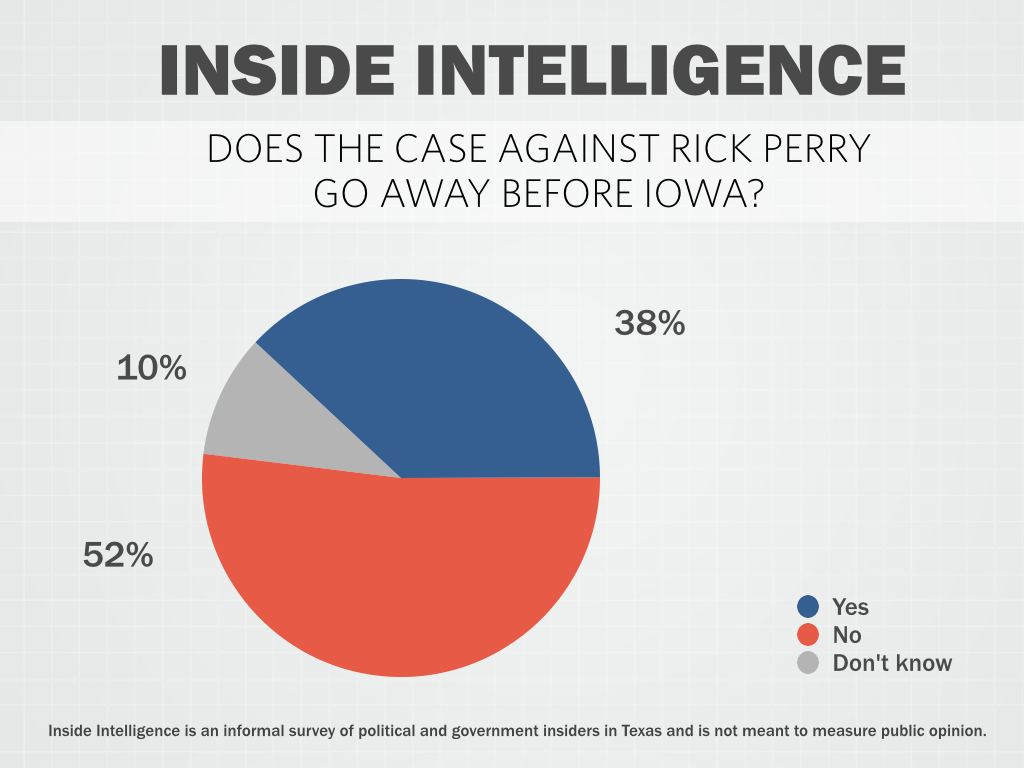 With one of two indictments now gone, does the court case against Rick Perry conclude before the Iowa caucus?

• "But it won't matter because Perry will have shuttered his presidential hopes."

• "Is the glass half empty or half full — did the panel of Republican judges dismiss one or see merit in another?"

• "It does not really matter. The special prosecutor has already been discredited with the dismissal of the one charge." 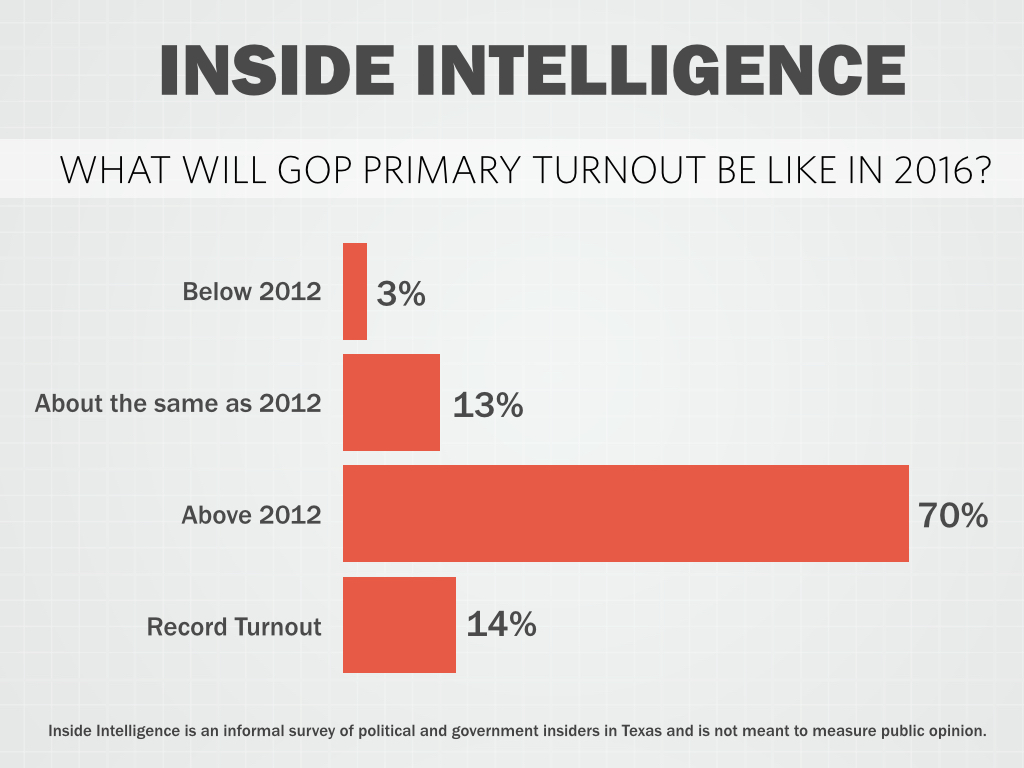 More than 1.4 million voters cast ballots in the 2012 GOP presidential primary. What are your turnout expectations for the primary next year?

• "After enduring the Obama presidency, Texas GOP voters are ravenous for a red president. They will turn out."

• "The angst among the grassroots will bring out new voters who're afraid of the status quo."

• "It has to be a record turnout because for the first time in modern history Texas will be critical in the delegate count."

• "2012 was an odd election because of the redistricting battle. It should be higher on a uniform election day."

• "As long as Trump staying in GOP primary, lots of folks will come out to vote." 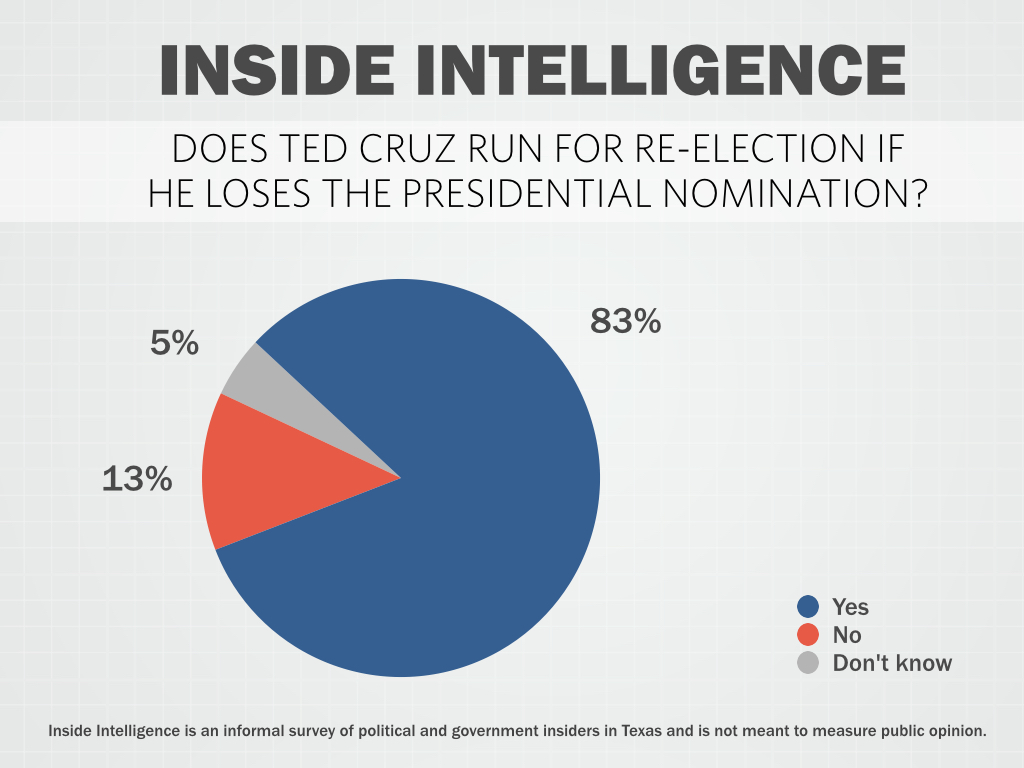 If he does not win the presidential nomination next year, does Ted Cruz run for re-election?

• "He will retire to Goldman Sachs and write a book about the moral decay of America and restoration of the Gold Standard."

• "He might also get a VP nomination. Look at how many VP candidates have gotten the presidential nomination afterward. Truman, Nixon, LBJ, G. H. W. Bush, Mondale, Humphrey, Gore..."

• "For someone who rails against government, he needs to continue his streak of government jobs."