For this week’s nonscientific survey of insiders in government and politics, we asked about who would benefit from a flameout by Donald Trump, the state of relations between blacks and the police in Texas and the fate of Confederate statues around Austin.

On Thursday, Trump was on the Texas-Mexico border with his campaign apparently having survived the candidate's self-inflicted verbal wounds — from his assessment of the moral character of those crossing the border into the United States to his assessment of the war hero status of U.S. Sen. John McCain.

Our first question: Who in the GOP presidential field would benefit the most should Trump be forced to shelve his presidential ambitions? About 40 percent of the insiders believed Ted Cruz would be the big winner, with another 24 percent citing Jeb Bush as the big beneficiary.

On the next question, 47 percent of the insiders did not think that relations between blacks and the police have worsened from 10 years ago. Another third said that relations have deteriorated.

On questions about the fate of Confederate statues around town, the insiders split.

For the statues that sit on the UT-Austin campus, 73 percent thought that they would be gone sometime within the next two years. For those statues on the Capitol grounds, 74 percent didn't think they would be removed in the foreseeable future. 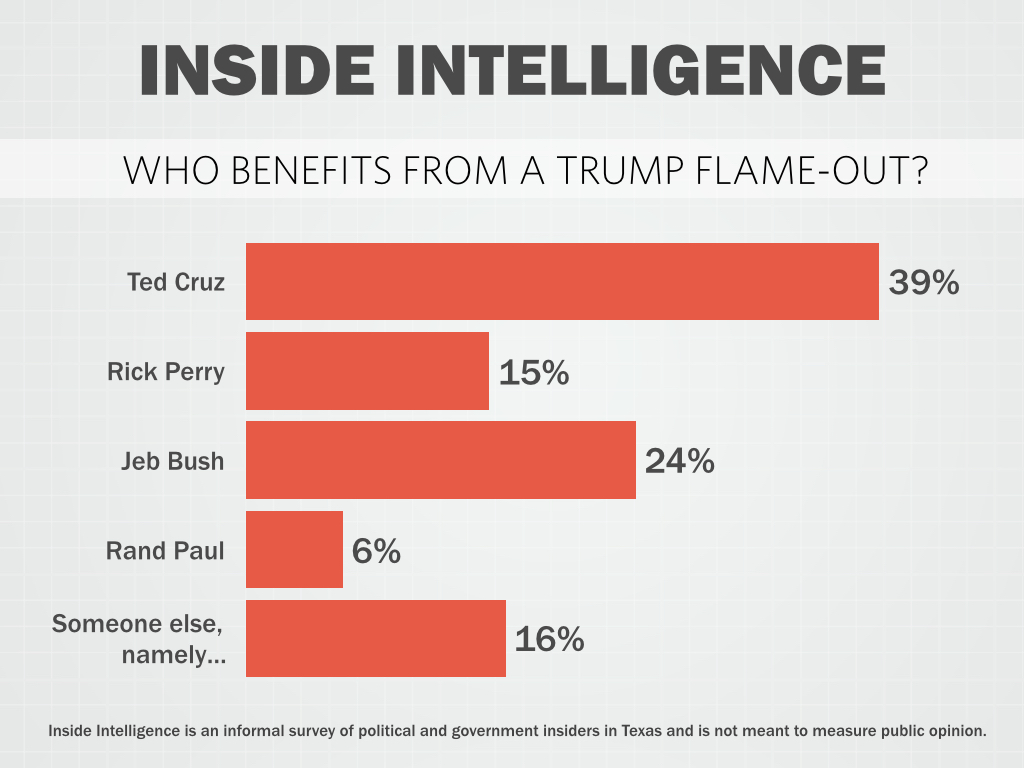 Who would benefit the most from a Donald Trump flame-out?

• "Trump was stealing Cruz's oxygen; it will return soon."

• "Bush wins each time one of the flakier biscuits burns up. Trump won't be the last."

• "Trump hurts all Republicans but it is probably best that he remain in the GOP Primary until he completely marginalizes himself and makes the odds of his mounting a serious challenge as an independent less of a threat. At this point, as an independent candidate, he could hand the presidency to Hillary and the Democrats in the same way that Ross Perot handed it to her husband."

• "You forgot the option for 'The entire GOP.'"

• "Perry is rising well on this opportunity." 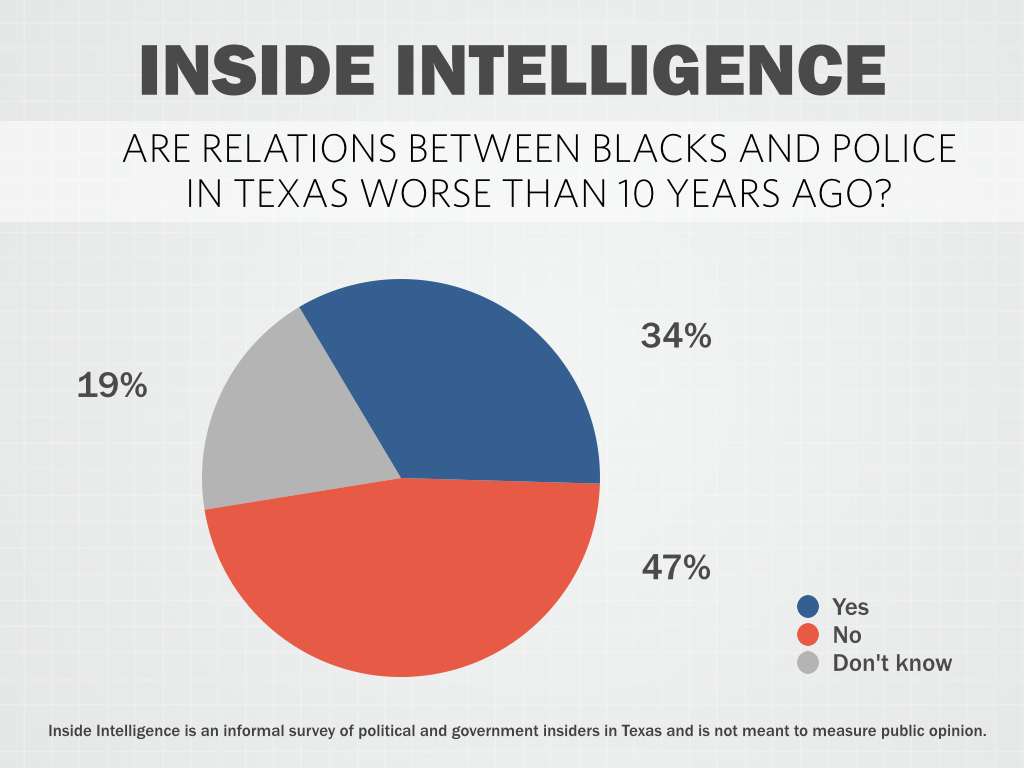 Are relations between blacks and the police in Texas worse than 10 years ago?

• "You are kidding, right. Of course it is better. Do you know the percentage of urban police officers in Texas who are African American. The institution has changed but there are still problems."

• "With the broadcast and print media showcasing this issue, it's hard to get a good read, but there are there issues, certainly, to the extent it is played up, probably not. The vast majority of these encounters rest on poor police training, poor screening of potential police candidates and lack of accountability among and between the rank and file police themselves."

• "They have been bad, also for others of color, predominantly Latinos in Texas, and much is now in the news due to national attention."

• "It's not just 'blacks and police,' there's a mortifying trend in police misbehavior against civilians, but unfortunately it does seem to single out Black Americans more than the rest of society." 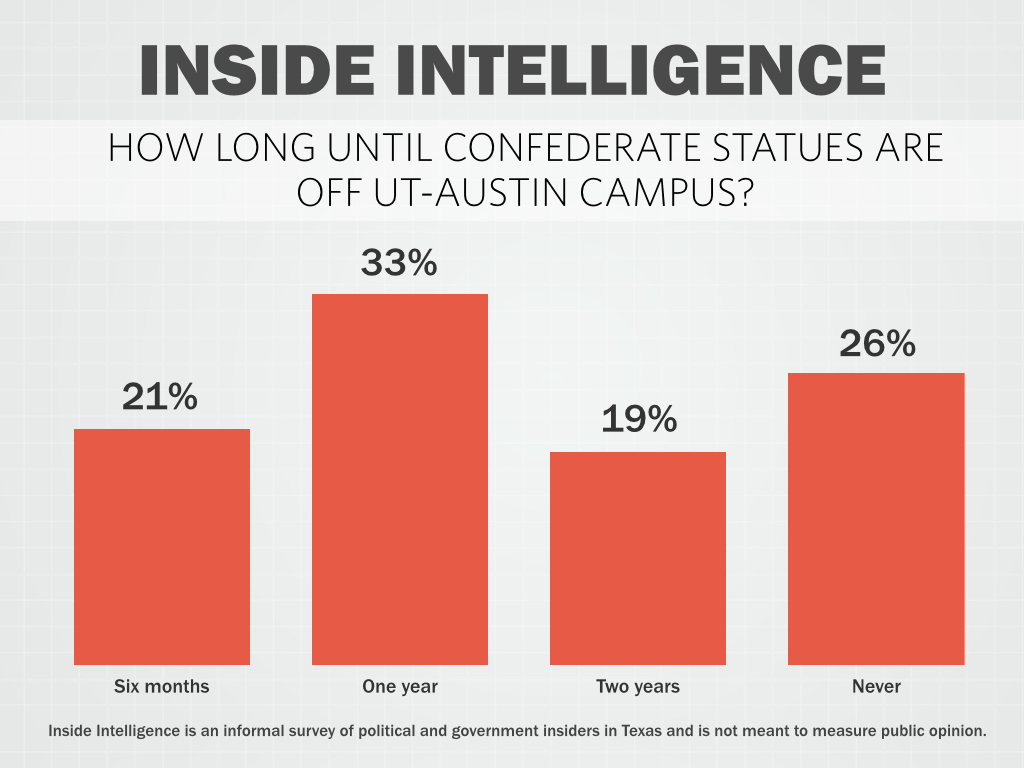 How long until those Confederate statues are off the UT-Austin campus?

• "It all depends on what type of pressure is placed by the student body and media. The Confederate story was so last week and those are the times we live in."

• "Statues less provocative than a flag and many of those Confederate officers fought in other engagements on behalf of the United States."

• "They'll wait until they've talked it to death, then will move them quietly to some garage where no one will see them for a while. Then they'll sell them, and watch for the fun to begin."

• "Some statutes of Rebs who had no connection to Texas will go (looking at you, Jeff Davis!), but those who were Texans will remain. What, are they going to tear down the Littlefield House and plow under the Littlefield Fountain? Not hardly."

• "UT will do what is done at the Nation's Capitol, move the statutes inside a building and place them as museum pieces." 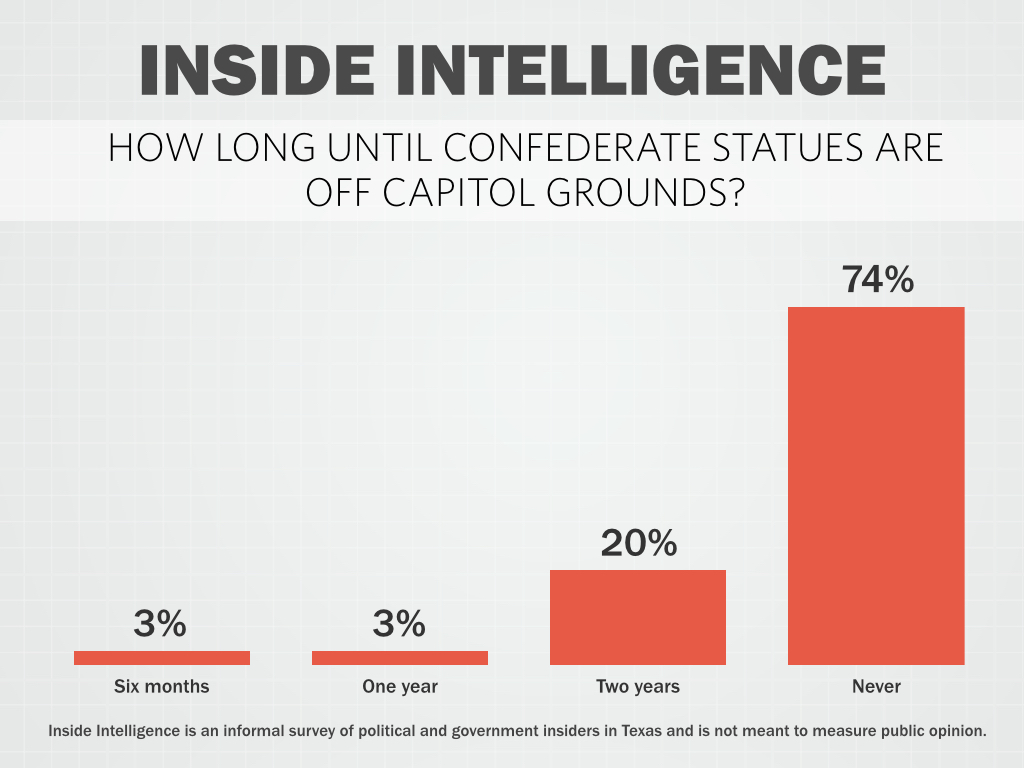 How long until those Confederate statues are off the Capitol grounds?

• "There are a lot of House members who would lose their primary if they vote on removing those statutes off the Capitol grounds."

• "Does this include the official Confederate flag, one of the Six Flags of Texas?"

• "Big stupid fight in the next legislative session. Predict they will plead budget constraints and agree to leave the statues and re-write the plaques. Will take a year to come up with the right wording. SBOE will get involved..."

• "There might be some re-branding or added context given them, but they aren't going anywhere."

• "Never is a very long time, but at least not during this decade."