For this week’s nonscientific survey of insiders in government and politics, we asked about Attorney General Ken Paxton's future.

Not too much ambiguity this week on how the insiders view things: On the first question, about whether the current special prosecutors' investigation will end in an indictment, nearly 90 percent said yes.

More than 70 percent don't attribute a political motive to the investigation, while 80-plus percent don't expect to see a resolution to the legal issues before the end of the year.

The insiders are a little more split on the question of whether Paxton will be able to serve out his full term of office.

Fully 60 percent don't believe he will make it to the end of his term. Another 20 percent think that he will serve out his term. A similar number said they don't know at this point whether will Paxton survives as a state officeholder. 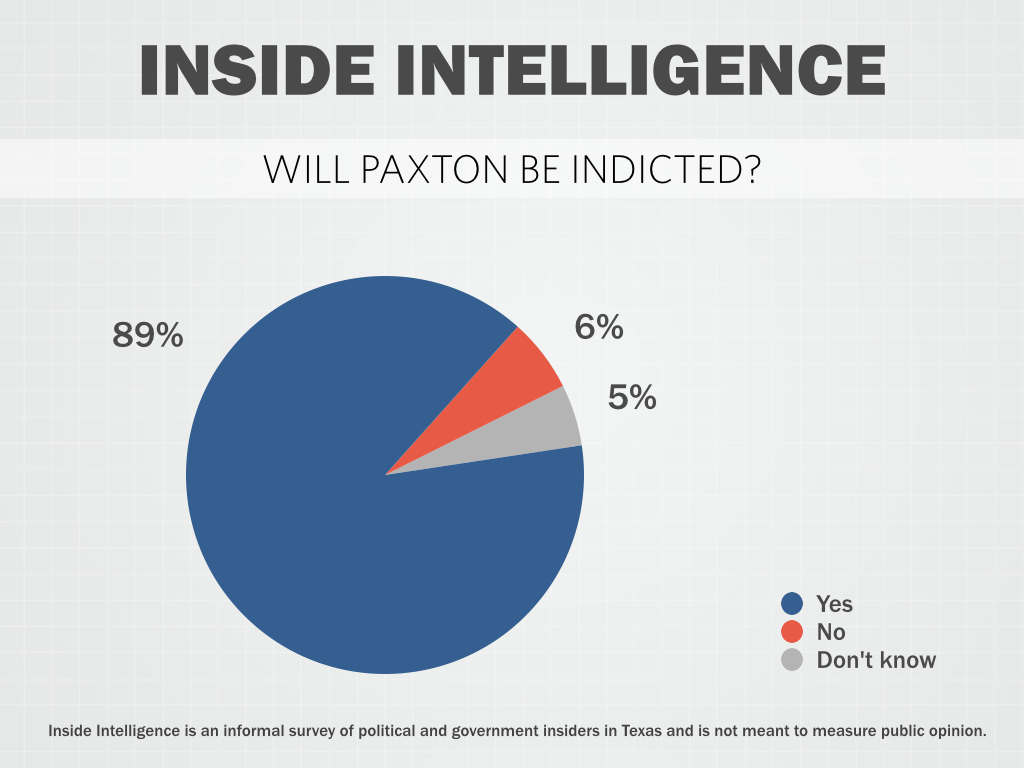 Do you think Ken Paxton will be indicted?

• "Yes, Special Prosecutors have to make a name some way, and what better than to indict and Attorney General."

• "President Reagan's '11th Commandment' of not speaking ill of a fellow Republican is not applicable here; General Paxton's behavior and comments are so appalling, and criminally-intended, he deserves to be indicted and judged by a jury."

• "A Grand Jury in McKinney does not indict a Ham Sandwich. It must be bad."

• "Securities fraud is no longer waved off as crime-light." 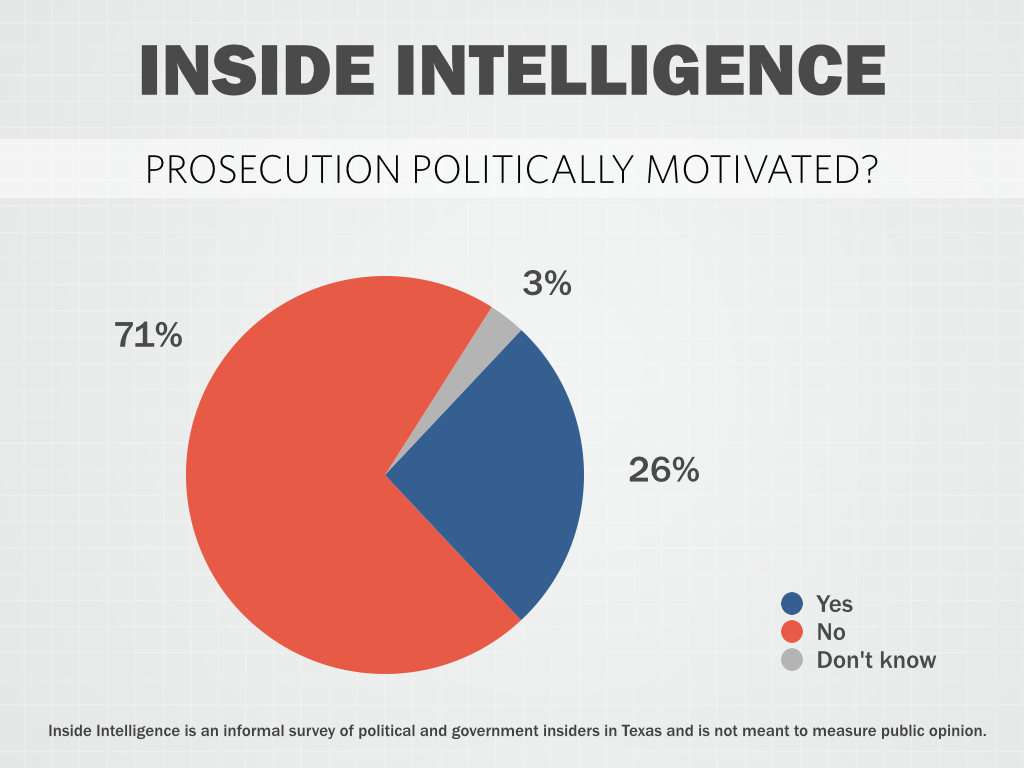 Do you think there is a political motive for his prosecution?

• "No, he broke the law. Guessing the Republican leadership was thinking the Texas Rangers would be a better place, but alas, they too follow the evidence."

• "How can there not be political motivation in prosecuting a state attorney general? However, what matters isn't motivation but whether there are legitimate grounds to indict Paxton."

• "Yes, but that doesn't mean it isn't also justified."

• "By who?? In GOP friendly McKinney?  My goodness, this is the poster child that challenged the Speaker!"

• "Maybe legislators will rethink their recent move to local prosecutions." 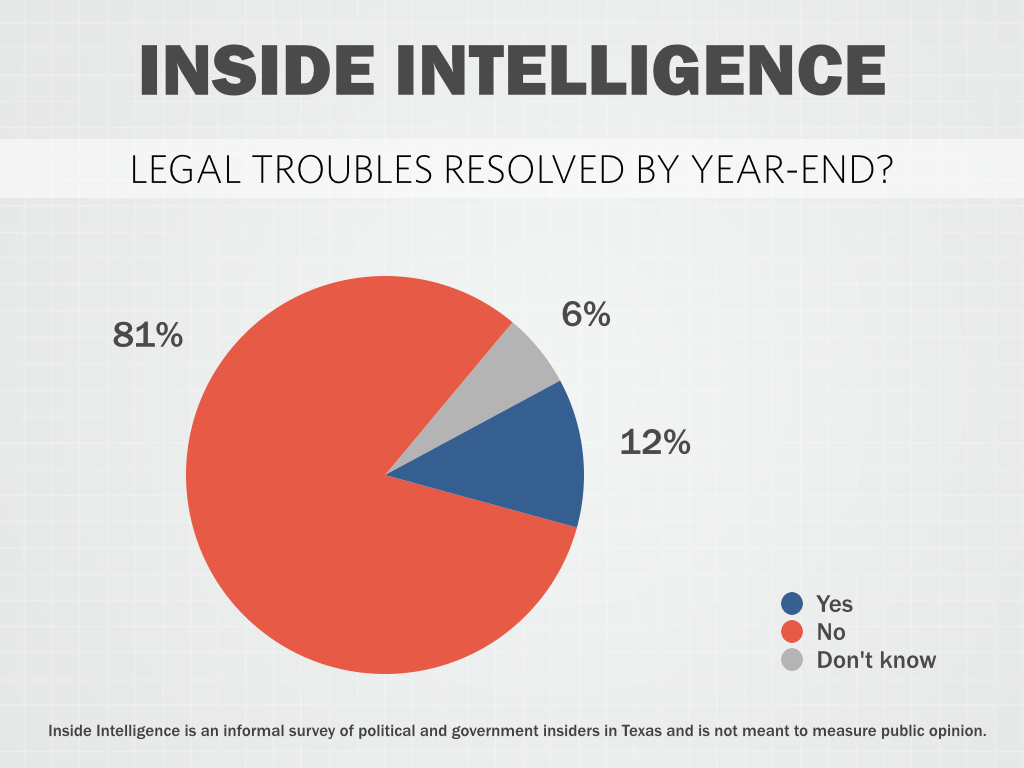 Do you expect a resolution to his legal troubles before year-end?

• "Which troubles, the special prosecutors or the SEC? Either way, there's no way this all wraps up in less than six months."

• "The clearer and more convincing the evidence, even his 'friends' will not want to see this drag out. Otherwise, it could take a while."

• "This is a long-term process that will only solidify his base. Those activist judges are getting out of control."

• "Only if he resigns rather than fights it to the bitter end, hurting his party."

• "Paxton will resign before the end of the year and Governor Abbott will appoint Don Willett as his successor." 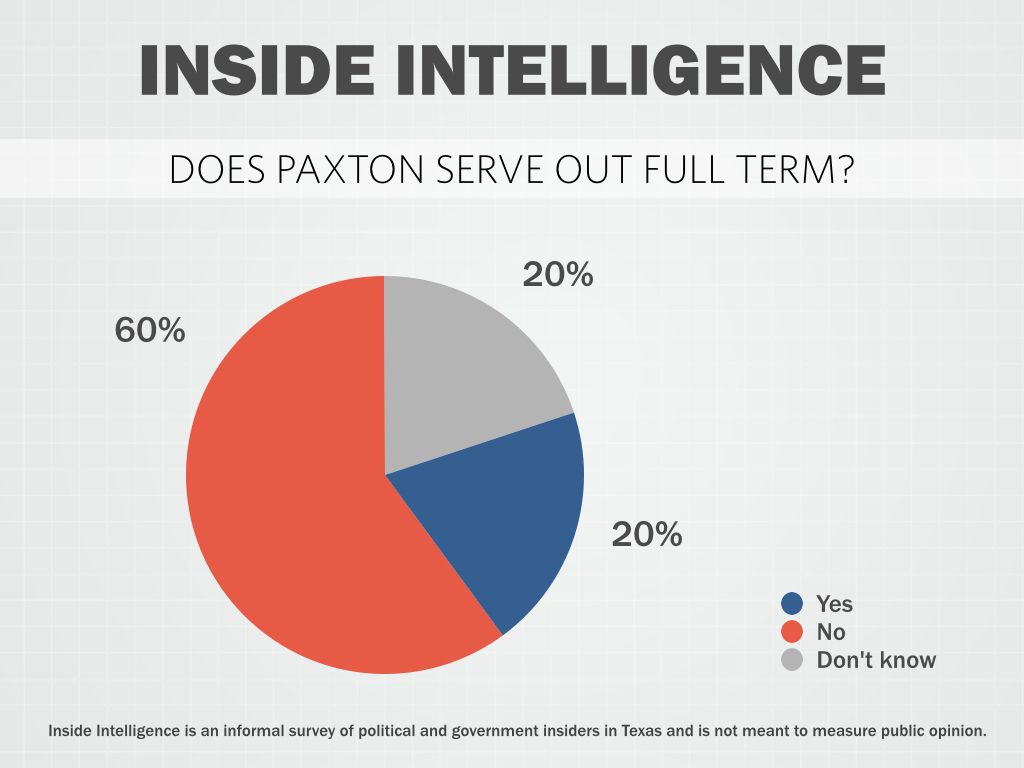 Does Paxton end up serving out his entire term as attorney general?

• "No, eventually it all comes crashing down."

• "He's going to ultimately prevail in court, there's no question in my mind on that. And because he'll prevail, there's no reason for him to leave office."

• "He will be One-term Paxton. He serves until the end, but will cut a deal to save himself from visiting the pen."

• "Unfortunately, this is going to hang around his neck and get heavier and heavier."