For this week’s nonscientific survey of insiders in government and politics, we asked about potential reactions to the U.S. Supreme Court's twin rulings last week on same-sex marriage and the Affordable Care Act.

Most insiders didn't think the Court's rulings would spur a reaction from the Legislature during the current legislative interim. About three in five said neither ruling would lead to anything on the legislative front.

The insiders were strongly one-sided about the correctness of Attorney General Ken Paxton's approach to issuing guidance to county clerks on how to follow the Court's ruling on same-sex marriage. More than 80 percent said that Paxton did not do the right thing when he told those clerks they could refrain from issuing a license although they would be risking legal action against them as a result.

On the final question of how long it might take for rural counties to comply with the Court's ruling on same-sex marriage, a majority of the insiders thought that same-sex marriage licenses would be available in every Texas county in 90 days or less. 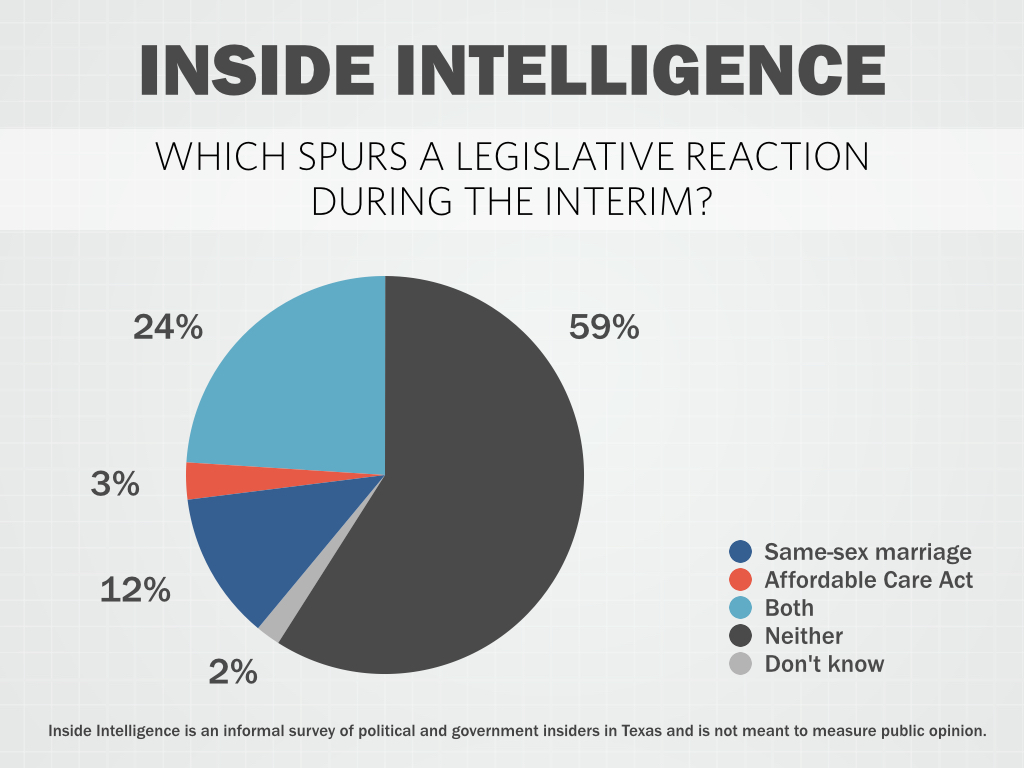 Which issue spurs a legislative reaction during the interim?

• "Abbott got out of the session relatively unscathed and calling a special opens a Pandora's box of Right winger requests."

• "Both, but the 'reaction' will presumably be more pre-primary rhetoric designed to impress voters who still don't know the difference between Washington DC and Austin TX."

• "Both issues are spurring legislation reactions in the form of press releases, etc., but I do not believe that either will result in a special session called by the governor."

• "When it comes to same sex marriage the SLIGHT majority of Texans are still out of step with the rest of the nation so Texas politicians have cover to be indignant about the issue."

• "If you mean by 'legislative reaction' that there will be a special session — neither. If you mean legislators will make statements and bills will be filed in 2017 to try to temper both rulings, both." 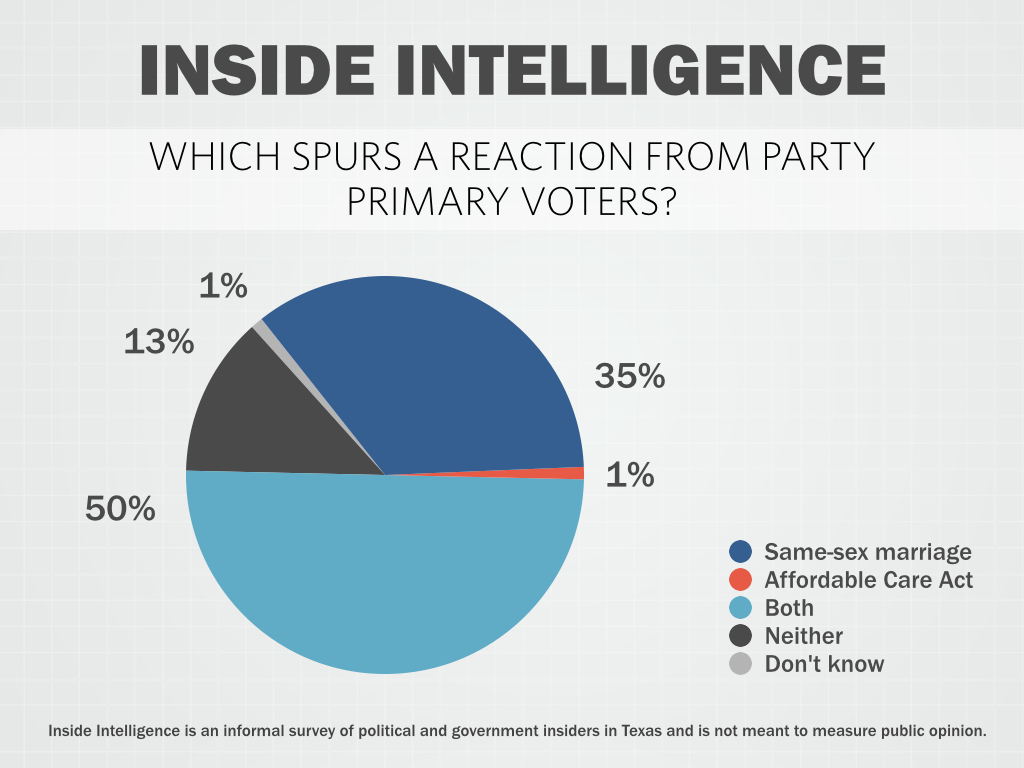 Which issue spurs a reaction from party primary voters?

• "Each party will make both of these issues prominent in their campaigns. However, it will be more motivating for the Republicans as the losers. The question is: Does gay marriage become the Roe v. Wade of this century and the debates never end?"

• "Texas Republicans will have the largest primary turnout in history, possibly as high as Democrats in 2008."

• "Marriage equality is the nail in the coffin for Republicans and young voters. Nobody beyond the true believers wants to be aligned with bigots."

• "There is a growing disconnect between GOP grassroots and the Washington establishment. Republicans should win in 2016, but this disconnect will sap GOP voter enthusiasm unless it's addressed."

• "As the rule of law continues to be disregarded by the SCOTUS i.e. Obamacare (there is more, tons more) and cultural fascism continues to gain strength i.e. dissent against the status quo and the raging radical left is quashed, people on the right will become more active. These things give Ted Cruz a stronger chance of becoming POTUS. Think I am crazy? Call me back when he is being sworn in as POTUS. I welcome the chance to have Cruz in the WH to try and reverse what has been shoved down America's throats by the regime, of which the Republicrats are a part of." 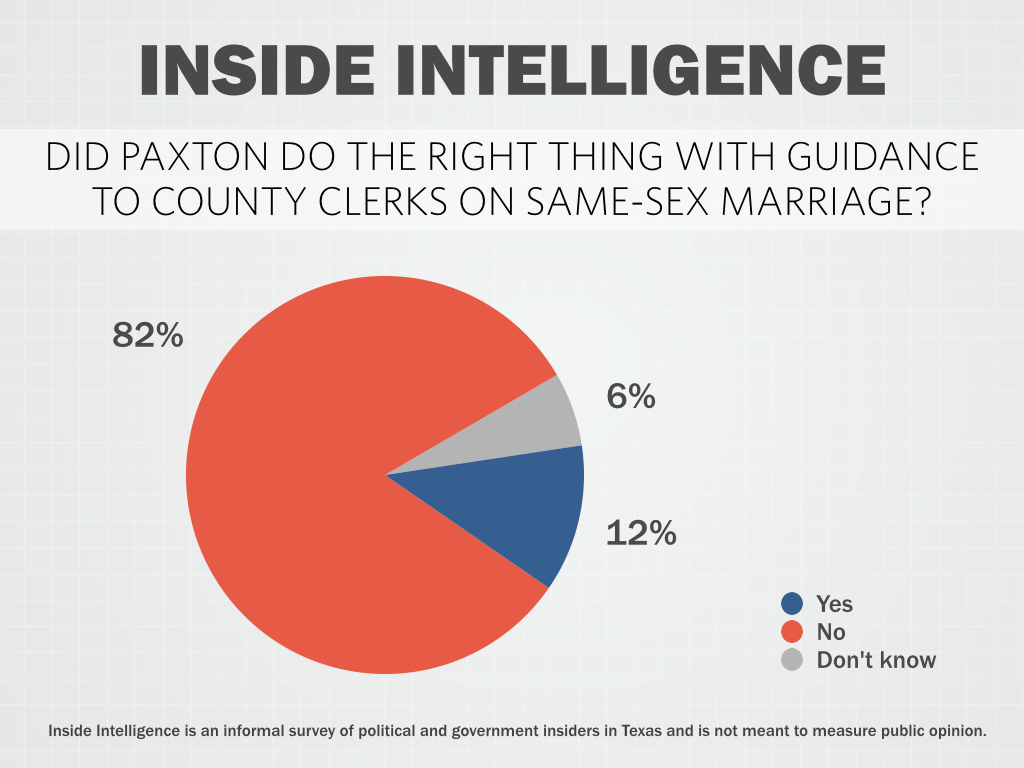 Did Attorney General Ken Paxton do the right thing in his guidance to county clerks on same-sex marriage?

• "The AG needs all the help he can get, so posturing on this issue is a boon for him. If he stays out of personal legal hot water over his securities violation — then he will forever be the darling of the religious right. So the guidance was the right thing for him, hardly legal, and useless legally."

• "Worse than merely not doing the right thing. He knows that public officers are required to uphold the law, no matter what their personal beliefs. If those beliefs interfere with their ability to perform their duties, they must resign. Poor lawyering, bad advice, leading to bad results for his clients: public officials across Texas."

• "For his political base? Sure. In reality, and if I didn't know any better, it sounds like he and numerous lawyers are ready to go chase down some ambulances."

• "As an attorney, it's shockingly unethical. Any private attorney giving similar advice to a client in another context would be a fantastic target for a malpractice suit. Attorney rules actually require attorneys to report information on misconduct, so Paxton puts every Texas lawyer in a difficult position."

• "It is interesting that we have an attorney general who has admitted to breaking the law telling others to ignoring the law. No place but Texas." 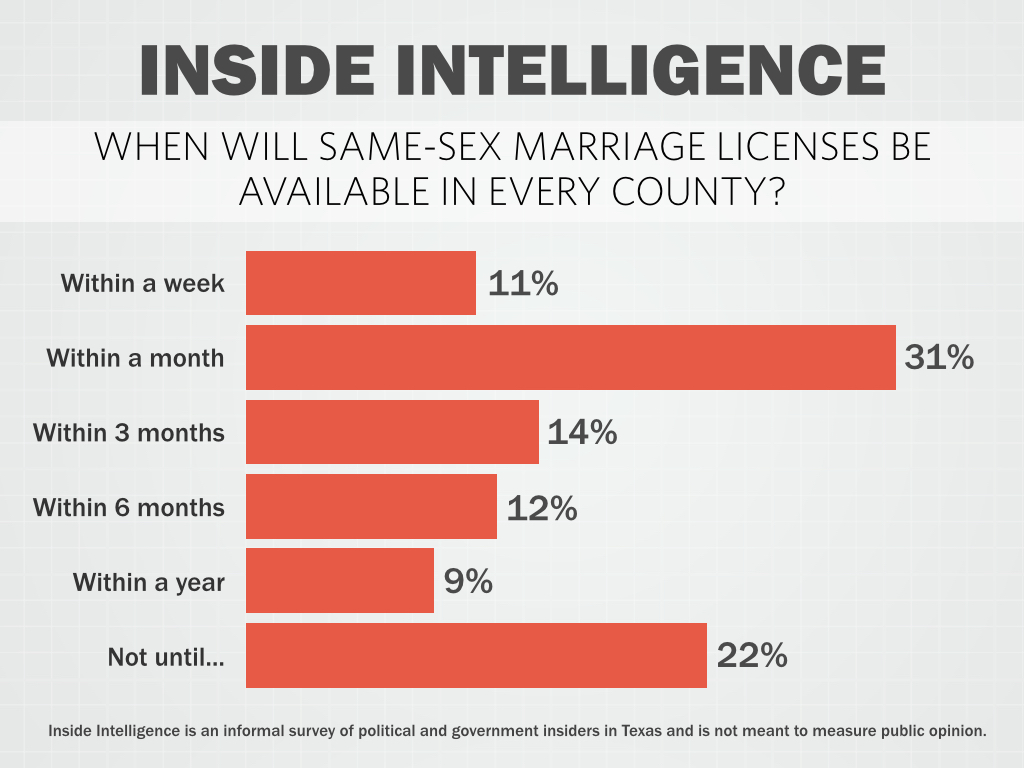 When will same-sex marriage licenses be available in all 254 Texas counties?

• "there are couples in all 254 counties demanding them. I'm waiting for someone to ask Warren Chisum to perform them a same-sex marriage in Pampa."

• "Do they even issue marriage licenses in Loving County?"

• "there are some costly lawsuits. I'll stand up for my county clerk's religious freedom, but only if it doesn't involve more taxes."

• "Don't know how hard the Leadership will attempt to block these matters - remember Segregation — took awhile especially in our rural areas!"

• "Let's rephrase the question: How long will it take for all 254 current county clerks to retire, die or get beat? More than 5 years, at least. Some rural county clerks will hold out until they have been sued personally, and there aren't enough willing plaintiffs to bring 254 lawsuits. For the past 10 years, people have been flying to a different state, and now they will be driving to a different county."