For this week’s nonscientific survey of insiders in government and politics, we asked first about Greg Abbott's job performance in his first legislative session as governor.

We are squarely in the middle of the legislative scorecard season so we asked the insiders to tell us how those vote tallies collectively affect party primary elections. Nearly two-thirds of the insiders thought those scorecards do influence election outcomes. That was more than double the 28 percent who thought that scorecards don't play a huge role.

We pivoted to presidential politics for the final two questions. The insiders were most in agreement that Jeb Bush and Ted Cruz, among the candidates with the strongest Texas ties, would still be viable contenders for the GOP nomination when the Texas primary rolls around next year. Bush was cited by 85 percent of the insiders while Cruz was cited by a little more than half of the insiders.

We closed by asking insiders on whether Republicans will start their national convention next year without having settled yet on a presidential nominee.

This drew perhaps the most interesting response of the week. The insiders were roughly split on the likelihood of what would be a historic brokered convention. Fifty-two percent rated the chances of a brokered convention as less than 50 precent while 48 percent gave those odds as 50-50 or higher. 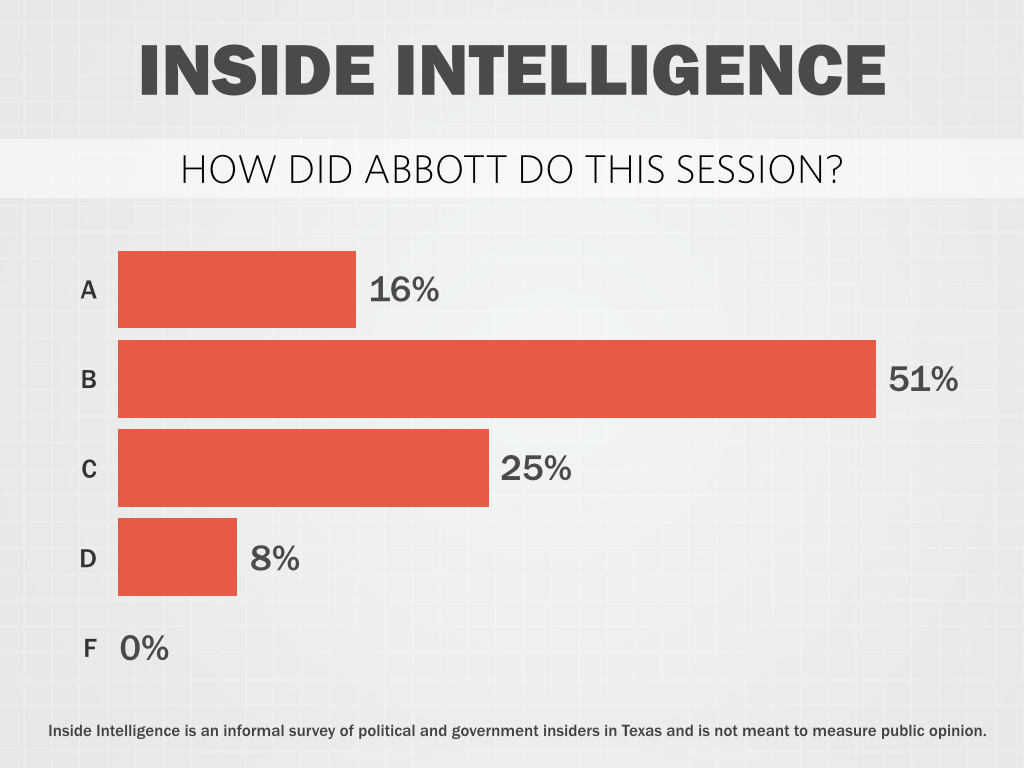 With Gov. Greg Abbott’s session now done, how’d he do?

• "Got Pre-K funding and Border Security funding, but no Ethics Reform. The people will get a chance to voice its approval or disapproval of the constitutional amendment for transportation dollars from part of vehicle sales tax funding. Better than average, but not great."

• "His office was curiously disengaged for much of the session and when veto time came, followed the advice too often of those who characterize legislation based on key word searches rather than actually reading the bills."

• "No harm — no foul, and very businesslike in approach. Didn't meddle with House or Senate, didn't get too far out there, played it safe and close to the vest. (Slight bobble with the war games...)"

• "In terms of influence, Abbott was on the D list. Publicly, I think he came off better than that, but as to his impact, actually changing what bills would pass and their content, he was the weakest governor I've ever worked with." 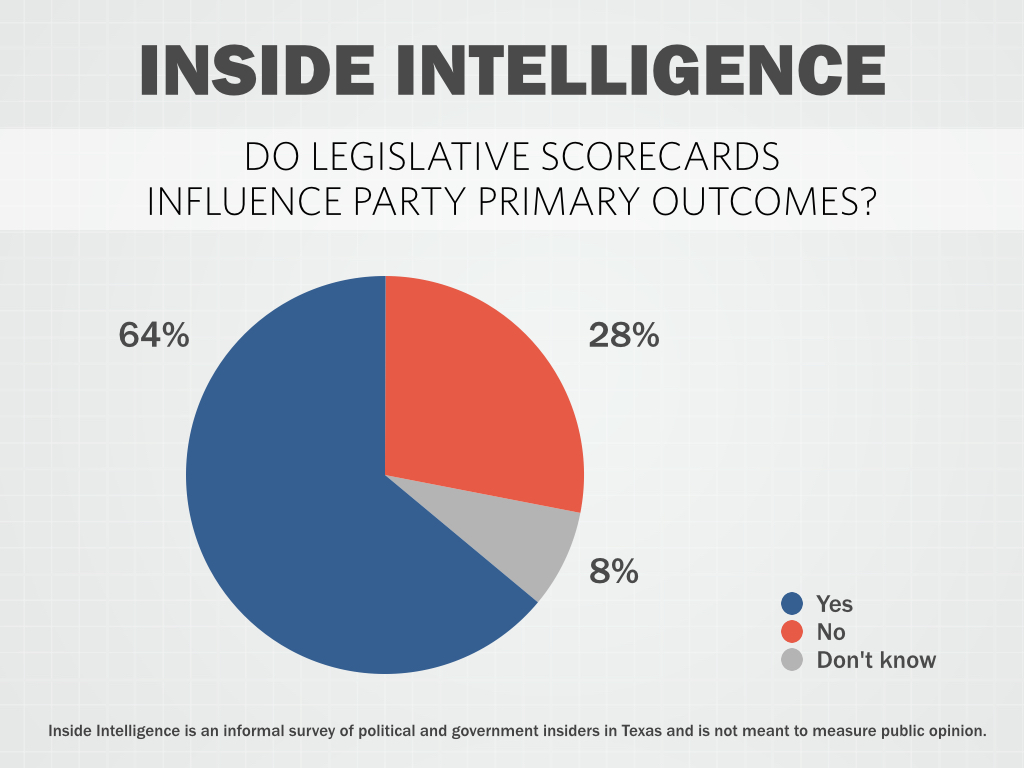 • "Certainly not for a majority of the races; however, many folks today receive their 'news' from non-traditional sources."

• "I've seen people coming to the ballot box with those scorecards, so I'd say yes."

• "It's still about knocking on doors." 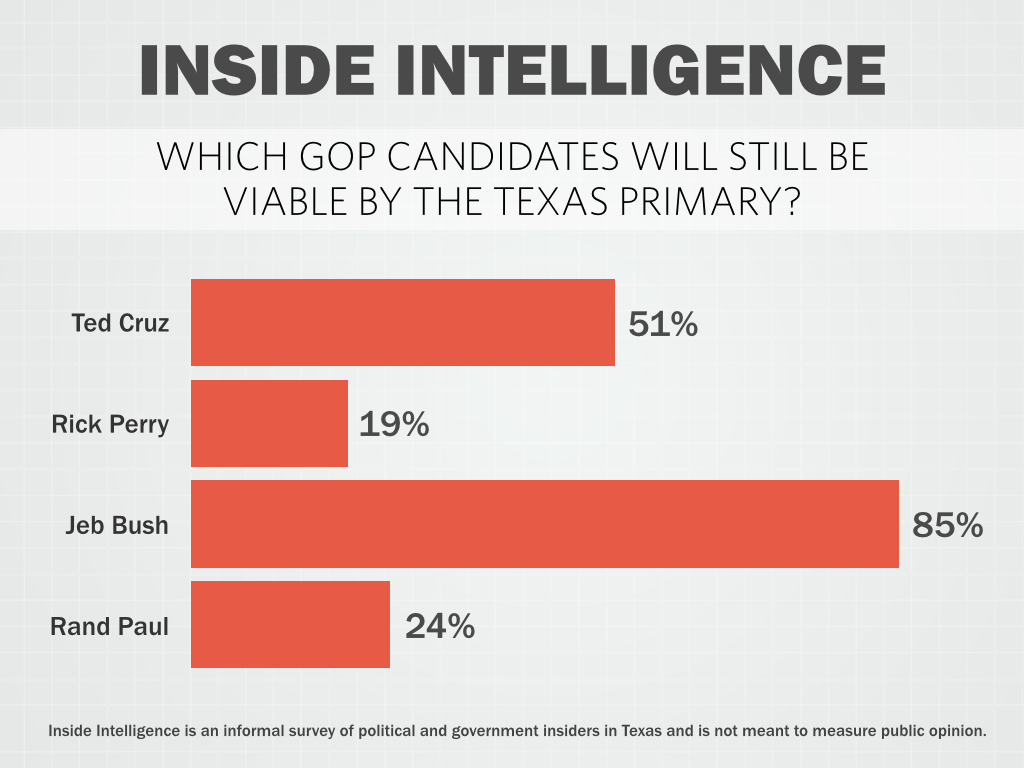 Which of these four GOP presidential candidates with the strongest Texas ties will continue to have viable candidacies by the time of the Texas primary?

• "Perry can't explain his support of in state tuition of illegals in a R primary. Or executive order on HPV."

• "All things being equal, I do not think of Bush or Rand as being Texan or from Texas anymore. Bush had to have been a resident and a registered voter of Florida for at least seven years to run for governor of the Sunshine State. Though Kentucky law is a bit ambiguous on residency requirements, surrender of residency is an issue with Rand as well. There ain't anything more un-Texan than to surrender your residency, least of which for political purposes."

• "If the Bushies get moving, and the 'moderates' re-engage in their fractured party, then Jeb will be in play." 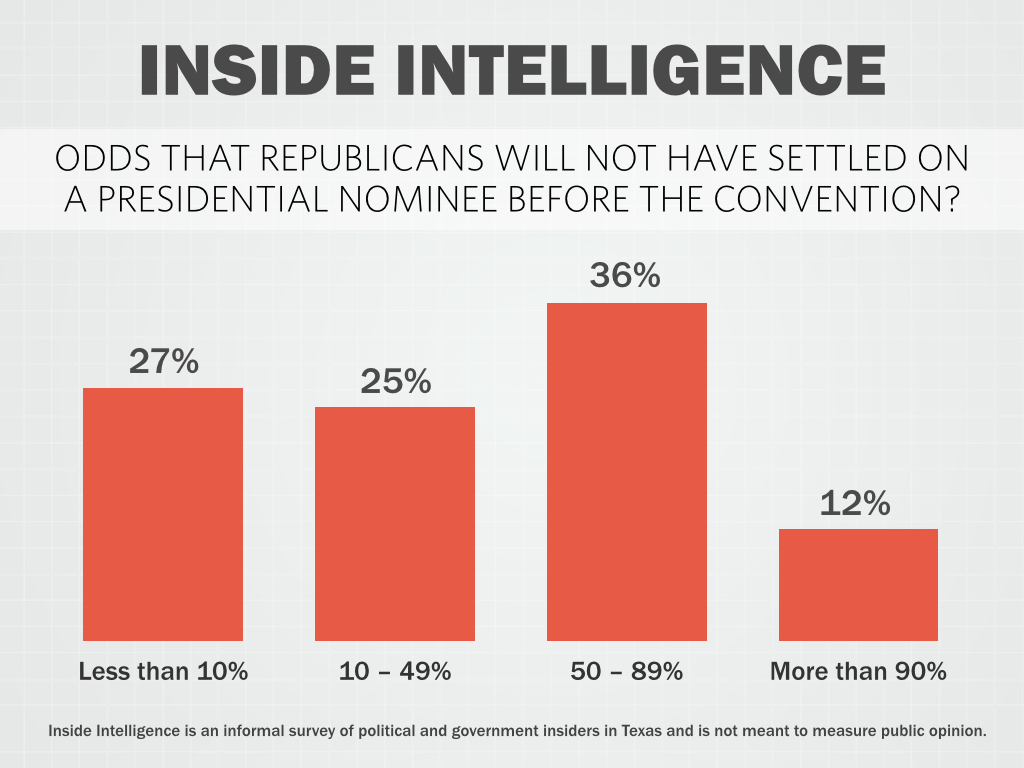 What are the odds that Republicans will not have settled on their nominee for president before their national convention in 2016?

• "If the Bush Money Machine doesn't decimate the opposition, this could be the first brokered national convention since the 1950s. Particularly if Iowa and New Hampshire create completely disparate 'win/place/show' results, it could be a fascinating Spring for political junkies."

• "Contested national conventions are a thing of the past, till the primary system changes."