For this week’s nonscientific survey of insiders in government and politics, we asked first about the fallout, if any, of the recent mayoral and Senate special elections in San Antonio for Texas Democrats.

In both instances, the candidate favored by progressive organizations was defeated by candidates who received backing from conservative groups.

Three-fifths of the insiders said that those electoral results signal a bigger problem for Texas Democrats, while a bit less than two in five didn't think these results should have state party leaders reaching for the panic button.

Also in the news this week were the announced retirements of two state senators — Tyler Republican Kevin Eltife and Horseshoe Bay Republican Troy Fraser. Five in six of the insiders thought that the elected successors to these two legislative veterans would tilt the Senate further right.

One of the causes touted by many in the conservative wing of the GOP is "constitutional carry," or the right to carry a handgun without a government permit. More than eight in 10 of the insiders predicted a renewed push for legislation on the topic next session.

We closed by asking the insiders as to who among the main presidential candidates with big ties to Texas had the best campaign kickoff. The winner there was Jeb Bush, cited by 37 percent. Rick Perry and Ted Cruz lagged with 13 percent and 12 percent, respectively.

Rand Paul was named by just 2 percent. But the bigger takeaway might be how many of the insiders were impressed by none of the men. Fully 35 percent chose the "someone else" option in the survey. 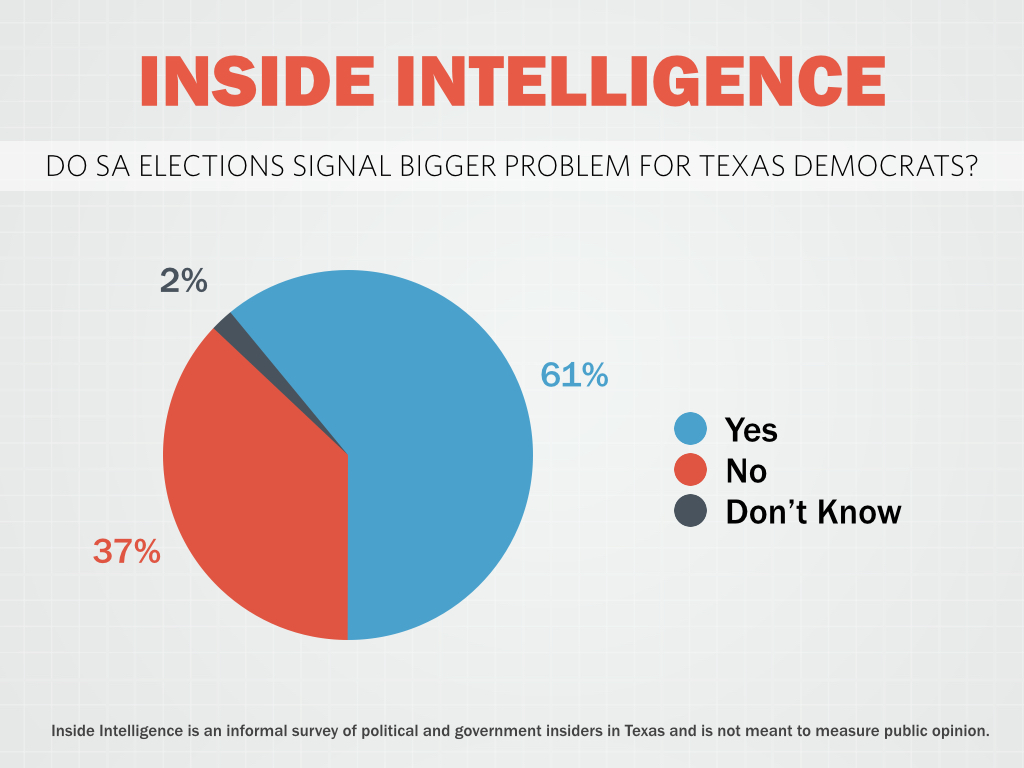 Do the recent losses by Leticia Van de Putte and Trey Martinez Fischer in San Antonio signal a larger problem for Democrats in Texas?

• "No. It simply signals that, one, the inside the beltway group in Austin who happens to like those two particular personalities were once again wrong about a local race and, two, that a mayor can usually whip a legislator if they want to give them a run."

• "Dark money is a big problem for Dems."

• "Yes. They are vastly outnumbered outside of the Valley, urban cores, and gerrymandered majority minority districts. For a political party, problems don't get any larger than that."

• "One would think San Antonio Dems would execute the ground game better than they have. That's easily fixable. Overcoming growing suburbs that might have a GOP bent to them is whole 'nuther issue."

• "The recent losses by Leticia Van de Putte and Trey Martinez Fischer were to competent fellow Democrats. So the signal is not one of larger problems for Democrats in general. It is a signal to those Democratic candidates who think and act like they are entitled to your vote." 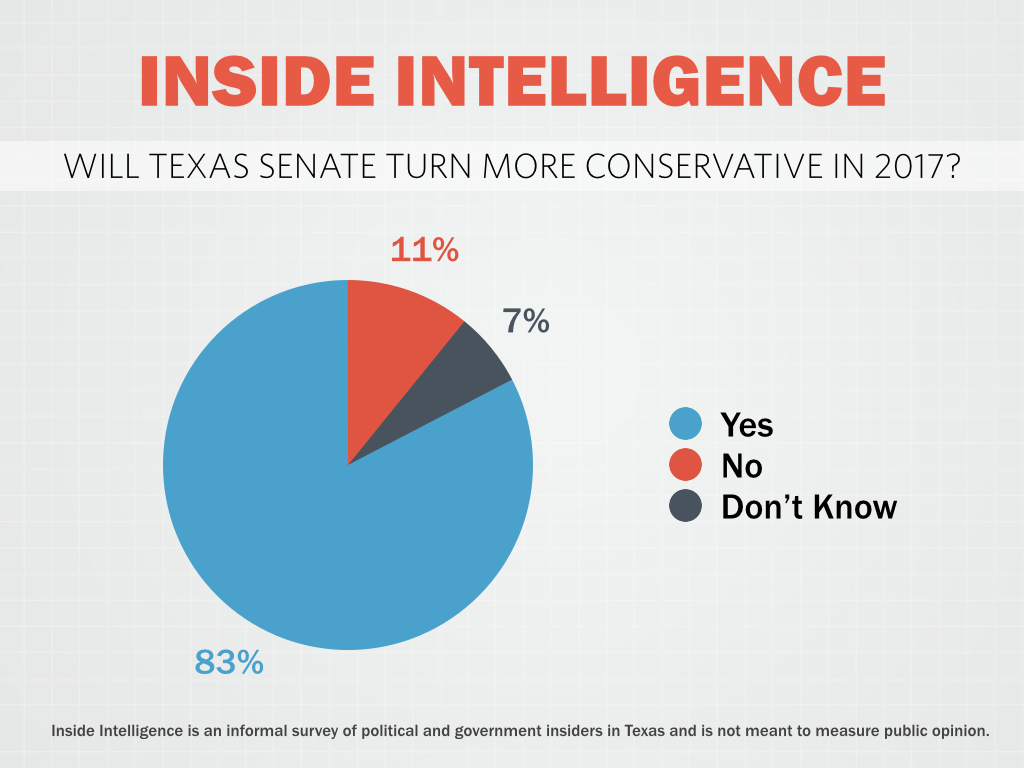 With the exit of Troy Fraser and Kevin Eltife, will the Texas Senate be more conservative next session?

• "If assuming more Tea Party influence, then not a true conservative move. Power lies within those that can compromise effectively in favor of your cause — something the Tea Party hasn't demonstrated."

• "Tell me exactly who the conscience of the Senate will be?"

• "Too early to know what will happen, and anyone who says otherwise is just running their mouth." 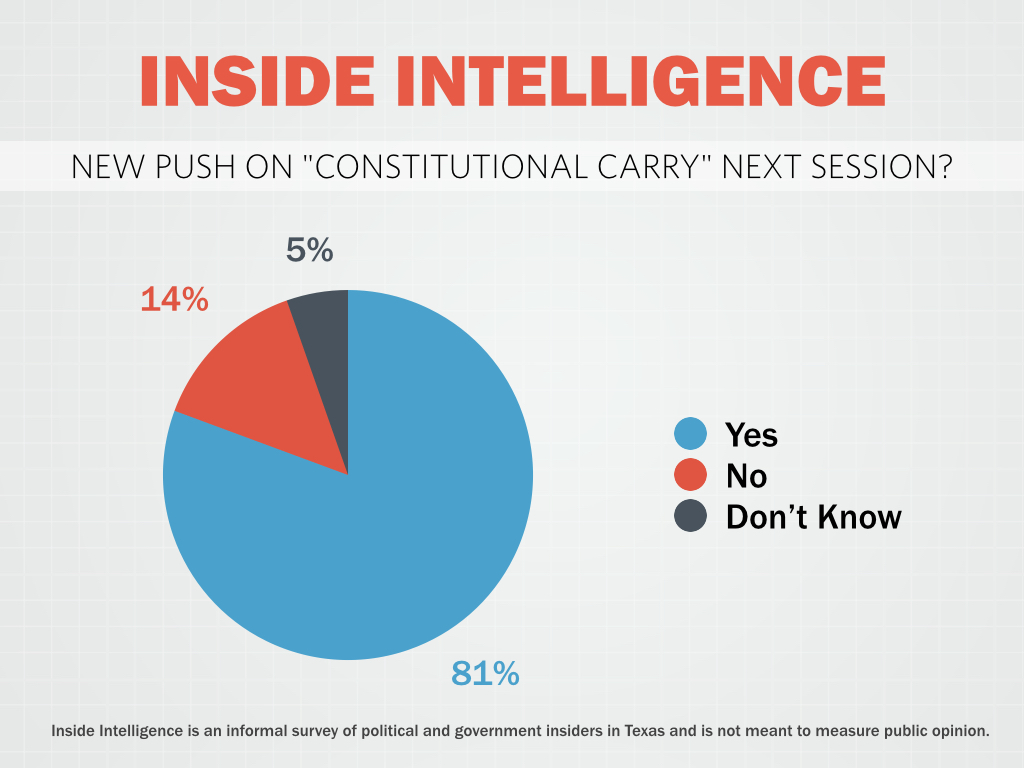 Will there be a new push for “constitutional carry” gun legislation next session?

• "Yes and it will once again fail. Nobody wants the political/campaign consequence of defending a vote that will allow criminals to carry weapons."

• "Governor's open carry signing ceremony was a vendor fest. Harder to make money off of unlicensed carry and ghost guns."

• "Define 'push.' Will Stickland file a bill? Yes. Will it be heard in committee this next time around? Depends on how nice he plays in the primaries..."

• "We got enough. Keep the soccer moms." 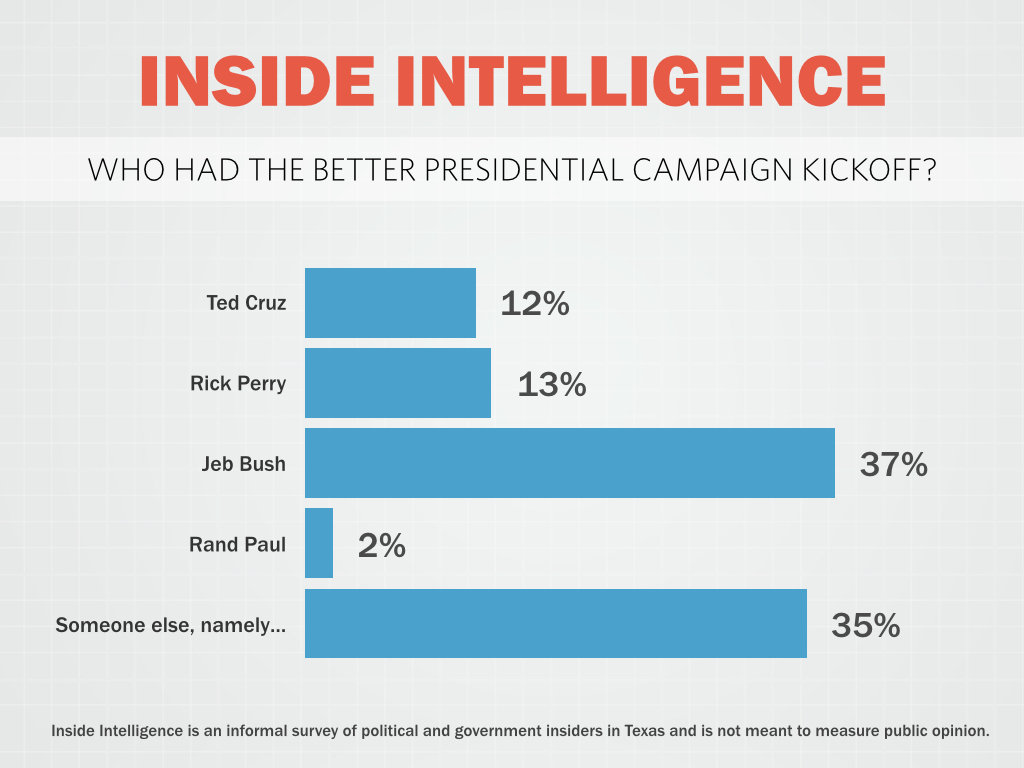 Who had the better presidential campaign kickoff?

• "All were good, but Cruz benefited from being first."

• "Four swings, four misses. Have yet to see one we thought effective, counting both parties."

• "Rick Perry — knocked the ball out of the park!"

• "Carly Fiorina is distinguishing herself — she's picked up a following of women. Rick is great and Ted is Ted, but those of us who know them well find them increasingly hard to take seriously."

• "None of them. Too many people in the race and it's old news."

• "Since you're comparing more than two, the question should have been 'who had the best presidential campaign kickoff.' Cruz went first, in a packed venue — two good decisions."