For this week’s nonscientific survey of insiders in government and politics, we asked first about the growing crop of retirements at the Legislature.

Four House members and a senator have already confirmed that they will not be returning next session, and that number is expected to grow. A majority of the insiders thought the total number of voluntary legislative departures this cycle would fall somewhere between eight and a dozen. Another 23 percent put the number of retirements at between 12 and 16. And 19 percent didn't think the number would rise above eight.

We then asked the insiders to assess the balance of power in the GOP within the Legislature and within the 2016 primary electorate.

The insiders were more polarized on which GOP faction held sway among the primary electorate but half still gave the edge to the establishment. Nearly one-third of the insiders thought the Tea Party has the upper hand. Many cited next year being a presidential year as a factor. The electorate usually expands in those years, possibly bringing in more voters from the moderate end of the party.

We also asked how the 84th Legislature will be remembered as time passes. Many summed it up in one word: guns. Others gave responses that fall under the broad rubric of "missed opportunities" while some mentioned the clandestine video recording of legislators. 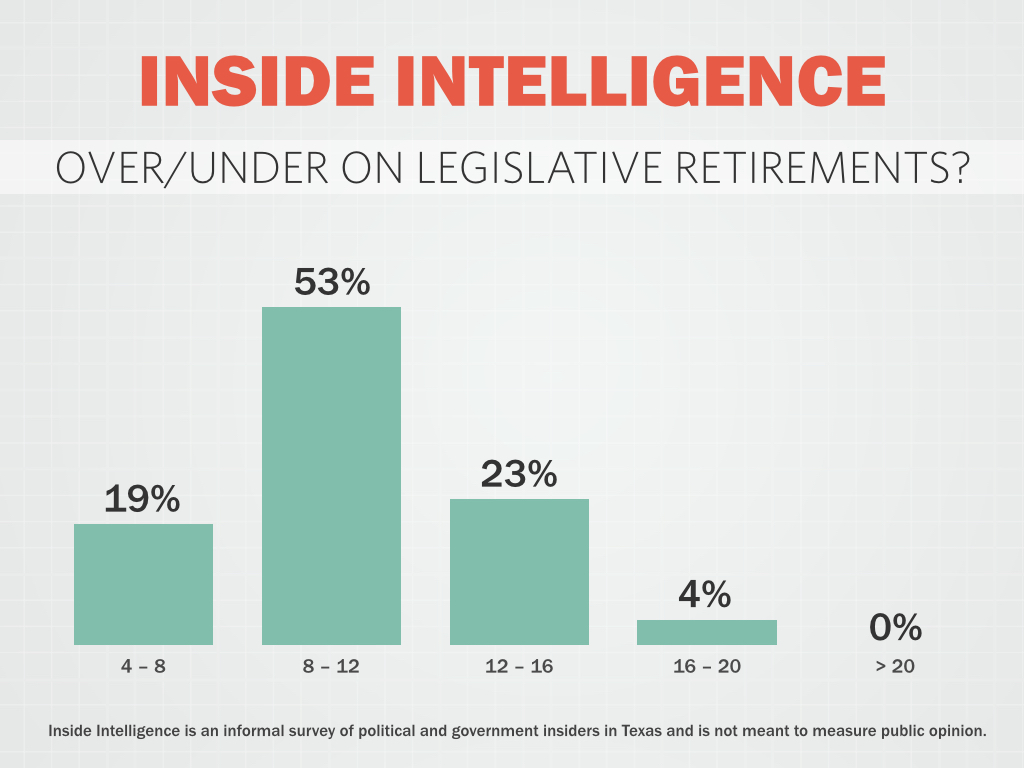 Four Lege members announced retirements prior to sine die. What’s the over/under on the final figure of voluntary departures?

• "And it's sad to see the lion's share of those are good, contributing, thinking members who are tired of trying to influence those who are 'D. None of the Above.'"

• "Some see the handwriting on the wall and don't want the trouble of a challenger."

• "Look for more to drop. Sessions with more money are harder than budget cutting sessions."

• "'The key to being a good manager is understanding that 1/3 of the team likes you, 1/3 of the team can't stand you, and the other 1/3 doesn't care. If you can keep the 1/3 that hate you from swaying the 1/3 who don't care then you are a good manager.' — Casey Stengel. If Joe Straus comes back, then take the under." 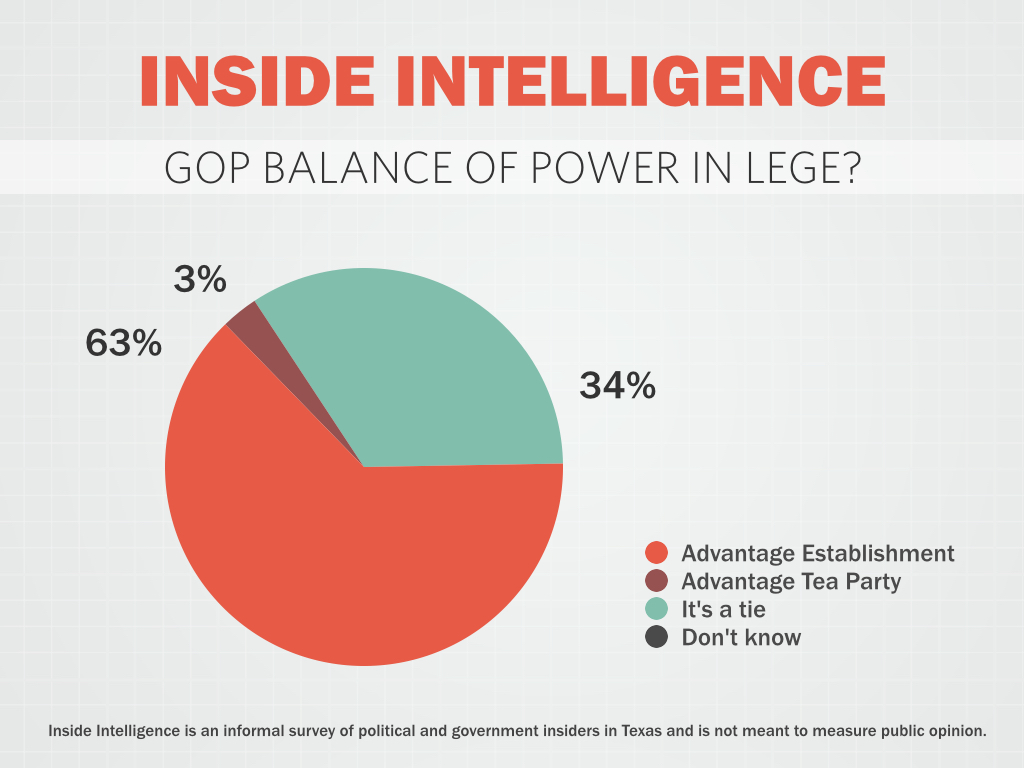 What’s the balance of power among Republicans in the Lege now?

• "When a Tea Partier attains a leadership position, like Lite Guv Patrick for example, and is responsible for governing, when does he become part of the 'establishment'?"

• "Establishment is holding in the House, Tea has taken the Senate."

• "The Tea Party won on some of the policy issues, such as guns, but they were not as successful as some thought they might be. They did have a great deal of influence over budget and finance issues as a result of the spending limit/no taxes/no debt rhetoric but the results were mixed. Somehow we decided to borrow $3 plus billion for university construction but could not decide to use the billions in available revenues to buy down current debt because no one was willing to tackle the question that would confuse the primary voters back home that buying down debt (good) is an expense (bad)."

• "Although there are many who are fed up with the lack of serious thought among the Tea Party, the establishment didn't win anybody over this session by capturing the intellectual (or moral) high ground. Instead, in the House, they showed themselves to be condescending and dishonest — winning their victories with devious power plays rather than leadership. Their focus on self-preservation and their refusal to give ground on ethics issues was the final straw. This will prove counterproductive for establishment R's and will likely get more of them defeated in upcoming primaries." 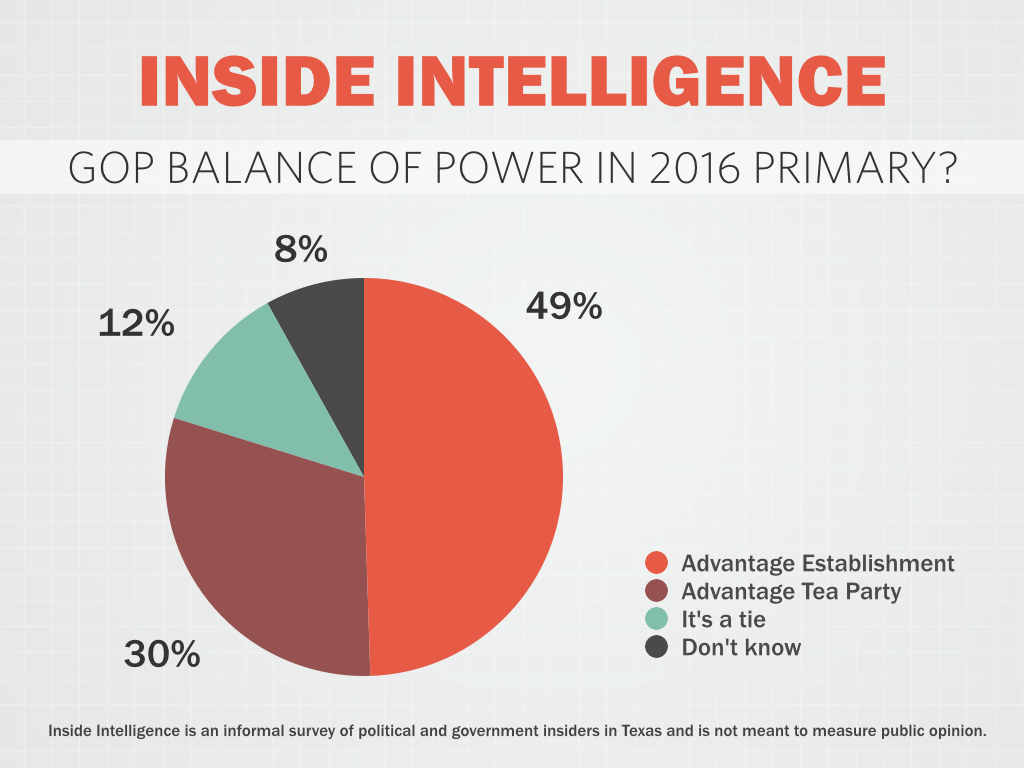 What will the balance of power be among GOP primary voters in 2016?

• "Depends if Texas' presidential March primary is in play. Increasing the number of R primary voters will not necessarily help those candidates who are too far away from center-right."

• "It will be interesting to see. Can the Tea Party members go home and explain how things really are to their primary voters in order to actually solve some problems without looking too much like the establishment? Stay tuned. There will obviously be a PR battle between the two in the interim."

• "Unfortunately for the Tea Party, the next primaries will have high Presidential year turnout, so knocking off incumbents is going to be tough."

• "It depends on who the GOP and Dems run in the presidential race. If the Hillary coronation has already happened, some Ds may crossover and vote in the R primary and dilute the Tea."

What will the 84th Legislature be remembered for as time passes?

• "Spending too much money as economy slows and setting up a crisis on school financing."

• "Just another run of the mill session. It won't be remembered by too many folks that don't regularly read the Austin-based political rags we all read. And by those that do pay attention, as the session that all those weirdo mercenaries were out filming folks."

• "Squandering opportunities to upgrade our state infrastructure. Ignoring the doctrine of local control."