There has been plenty written about Rick Perry during his time as a state representative, agriculture commissioner, lieutenant governor and 2012 presidential candidate. But as he announces his second run at the GOP presidential nomination, here are the eight things to know about him:

1. He'll always be remembered for forgetting the third thing.

"Oops" is how most Americans recognize him. If Perry is to succeed as a presidential candidate, he must unwind the enormous damage he did to his image during that embarrassing moment in a fall 2011 debate. But while it was the best remembered, it was one of several missteps; he was already on a downward slide in the lead-up to the debate.

But, in anecdotal interviews in the early states of Iowa, New Hampshire and South Carolina, the people who attend his events say they are willing to look beyond Oops and hear out Perry's pitch.

2. He’s running as a Renaissance man

These days on the trail, Perry acknowledges those failures. He promises he is an improved, more intellectual candidate.

His stump speech style is to cram as many facts and figures and cultural references, and he will even reference how he spent the last several years "studying."

At an Iowa pizza restaurant in January, he bragged about Texas’ art museums; at a Des Moines deli, he described time spent at the King David Hotel in Jerusalem; and just last week, his campaign posted video of the former governor playing Beethoven on a piano.

I still got it.

Next to “Oops,” Perry’s legal troubles will likely shape up to be the most difficult hurdle for him to pass in a presidential campaign. While still governor, Perry was indicted in August over allegations he abused the power of his office by threatening to veto funding for the state’s public integrity unit. Looking ahead, the charges could be thrown out or hang over his head for months to come.

4. His wife picked out his glasses 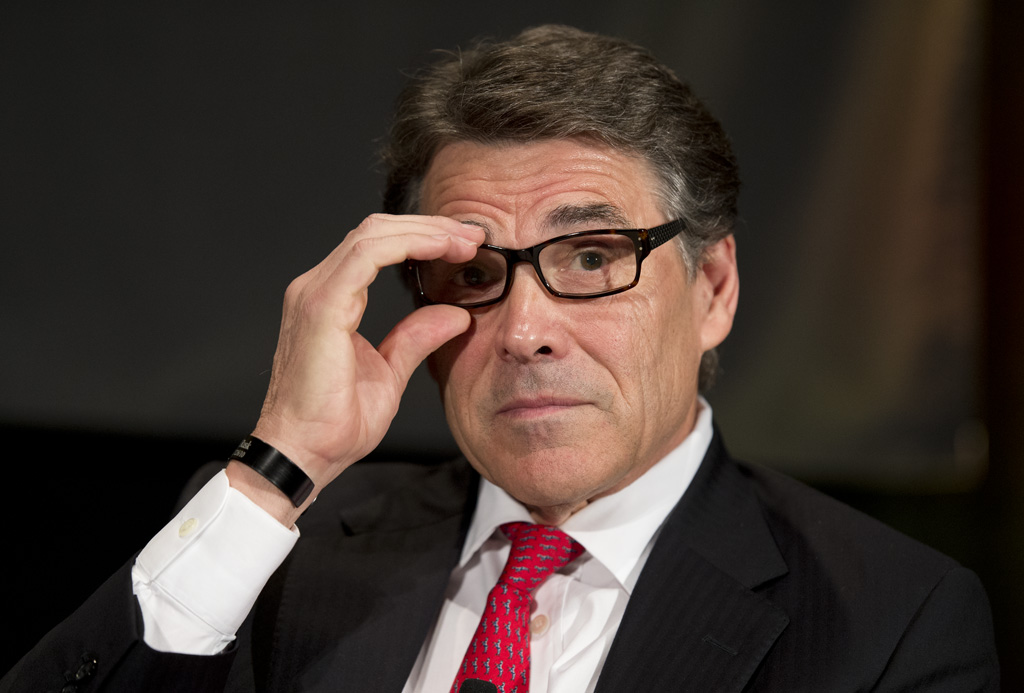 Beyond the comparisons to hipsters and Clark Kent, many political watchers assumed Perry’s thick rimmed glasses were a ploy to give him a more book worm look after after his 2012 campaign stumbles.

But, he’s said in multiple interviews, it was his wife, Anita, who picked them out.

5. He was once a Democrat

Perry ran for and won his state House seat in 1984 as a Democrat. The affiliation and his eventual switch to the GOP was not unusual within his generation of Texas politicians. Beginning with former Gov. John Connally and lasting until the 1990s, a succession of conservative Texas Democrats switched to the GOP.

But most curiously, Perry was state campaign chairman for U.S. Sen. Al Gore’s 1988 presidential campaign. A year later, Perry jumped to the GOP.

6. He’s one of the best retail politicians

There is a reason Perry is the longest-serving governor of the country’s second-largest state: He’s one of the best one-on-one politicians running for president.

His personal charm is central to his strategy.

While many of his rivals are sitting officeholders and still must spend time on their day job duties, Perry is working remote areas of Iowa and New Hampshire. And as one of only two veterans in the race, he has particular appeal in VFW halls.

Back in 2010, Perry aimed the laser-sighted pistol he packed for morning runs and shot a coyote that threatened his dog.

"Don't attack my dog, or you might get shot ... if you're a coyote," he told The Associated Press at the time.

"It was not in a lot of pain," he added. "It pretty much went down at that particular juncture."

8. He was an early viral star

That sarcastic adieu to a local news anchor happened in 2005, just as YouTube was in its infancy. The three-second clip eventually morphed into a looped rap riff that made the online rounds.