For this week’s nonscientific survey of insiders in government and politics, we asked for a job evaluation for the Legislature.

Meanwhile, those disapproving of the Legislature's work were evenly divided between "somewhat disapprove" — 17 percent — and "strongly disapprove" — 18 percent.

A bit more than half the insiders thought the Legislature had achieved a signature accomplishment with about two in five saying the session lacked a defining accomplishment.

We followed up by asking the insiders to name that accomplishment. Many offered up tax cuts and a few offered up votes for the budget and gun rights. We then asked what issue should have been addressed and wasn't. School funding was the runaway winner there. 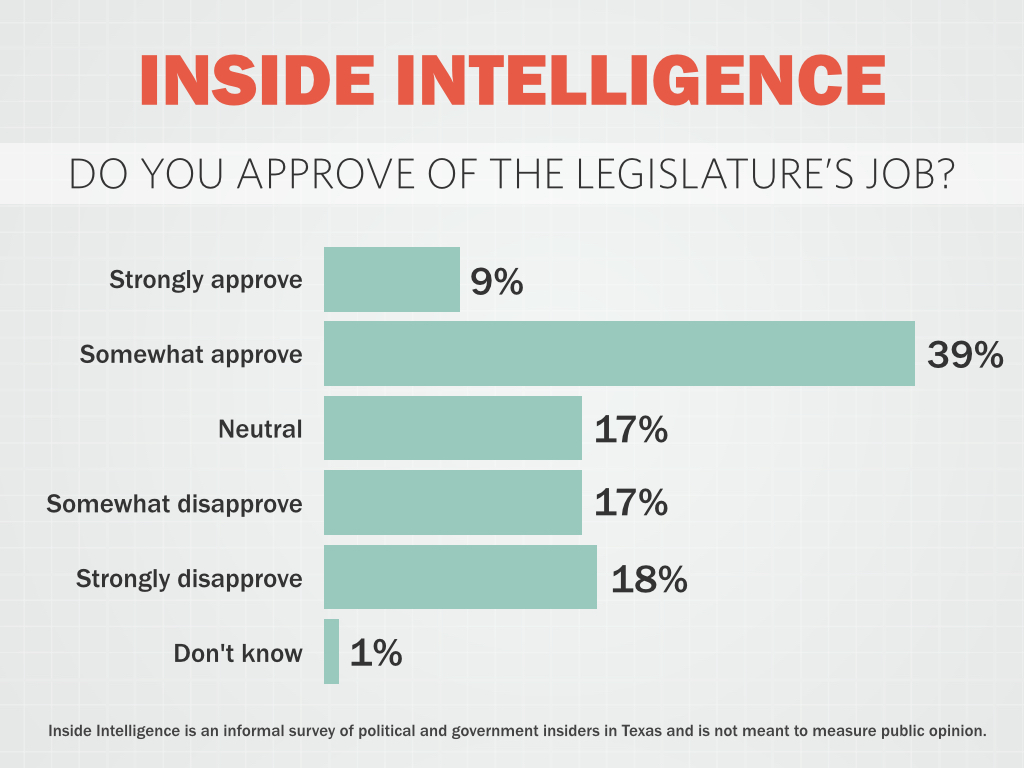 Do you approve of the Legislature’s job this session?

• "Got most of what needed to be done, done, without spending too much time and energy on things that won't go anywhere. Still too much focus on social issues for my taste, though."

• "The focus on tax cuts from the start ruled out doing anything meaningful on school finance. Or highways, higher ed, etc. So it was essentially doomed from the start."

• "Erosion of local control will be the hallmark. Could have done so much to strengthen the state's infrastructure, state facilities, parks, schools and the ERS system. Gave partial fixes, lowered taxes and declared victory."

• "Some positive accomplishments, but too much hypocrisy — they continue to yell about local debt but have no problem approving $3 billion in bonds for universities; everyone is for budget transparency, but Chair Nelson refuses to move the bill that would end the diversion of dedicated funds that will continue to inflate the revenue estimate and sit on taxpayer money."

• "The Legislature will leave town having passed the worse (by far) of competing tax plans, the minimum amount for schools, open carry, and maybe deregulation of people who want to remove excess eyebrow hair. Were I a member, I wouldn't brag on these things." 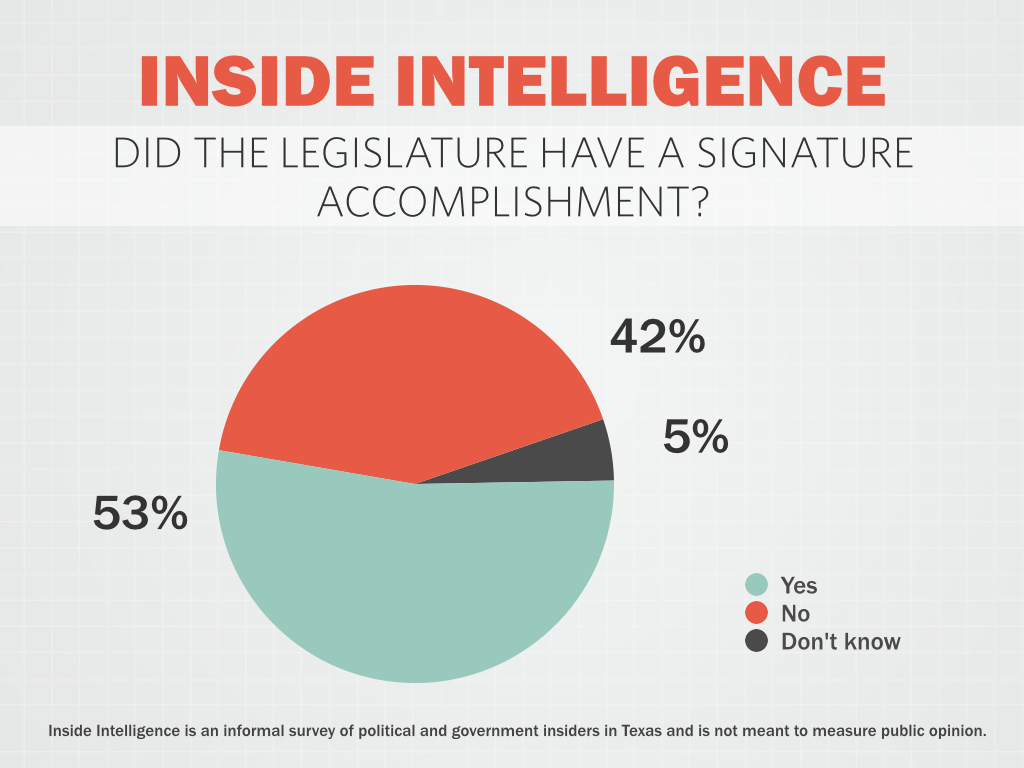 Did the Legislature have a signature accomplishment this year?

• "It's hard to put pre-K funding or open carry or something else on par with deregulating the electricity market or massive tort reform."

• "Someone is bound to crow about pre-K, but it restores only two-thirds of the money cut in 2011. An accomplishment only compared to doing nothing at all."

• "They had the money to address the many areas of deferred maintenance and growing need in our fast growing state and made some important steps in the budget but squandered opportunities by passing an unneeded tax cut package. The Eltife critique is on target."

• "Their signature accomplishment is Open Carry. I didn't say it was a good signature."

• "Tax cuts and a timely budget"

• "Beginning to clean up years of malfeasance in the state budget by beginning to end diversions of dedicated funds, addressing transportation, parks, state buildings, pension funding and burgeoning state debt."

What’s the biggest issue this Legislature should have addressed and didn’t?

• "A real ethics bill that squarely addresses the many conflicts of interest that plague the Legislature."

• "Protecting the property rights of landowners"

• "Transportation funding remains woefully inadequate for a growing state that has failing bridges, extensive wear and tear from population growth and substantial oil and gas related and manufactured goods production."

• "Paying down bond debt instead of miniscule tax relief." 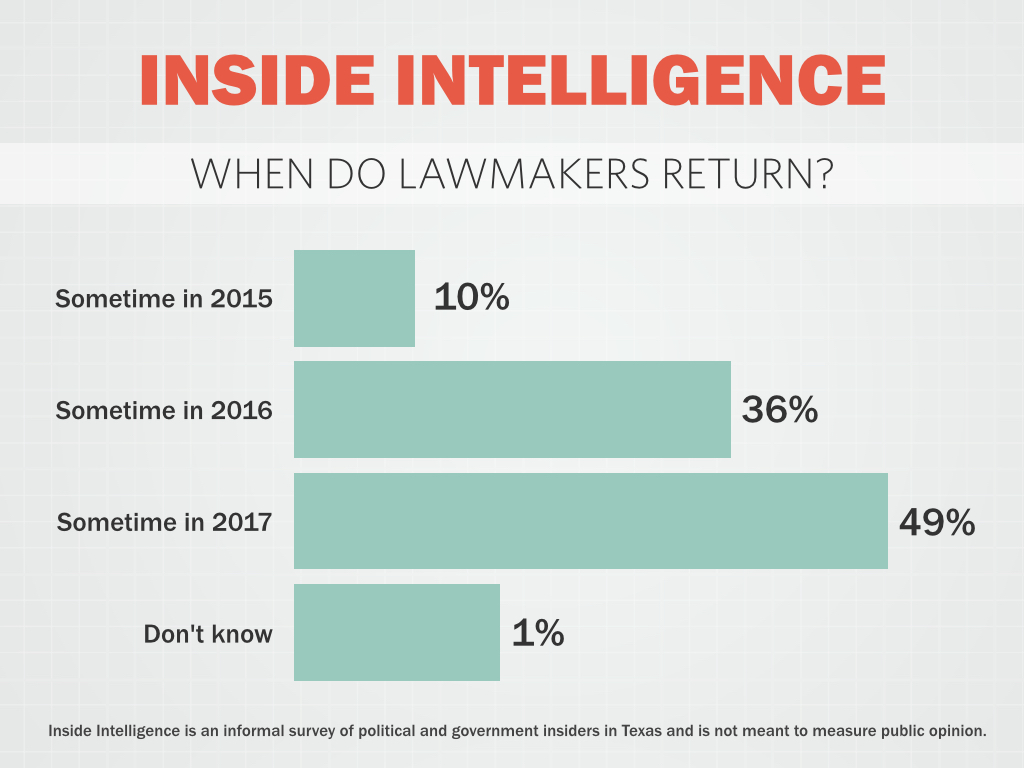 When do lawmakers return to Austin?

• "Could come back early, as a result of court ruling on EPA regulations."

• "What happens if/when the U.S. Supreme Court mandates homosexual 'marriage?' Texas could have prepared, but it wasn't a priority for the Governor, Lt. Governor or Speaker."

• "Merry Christmas to the new chair of House Education."

• "I'm guessing the Supremes will either rule for the state in school finance, or at least will give the Lege time to address it in regular session."