For this week’s nonscientific survey of insiders in government and politics, we asked whether the secret camera project being conducted by a nonprofit sympathetic to conservatives spotlights the kinds of failings in public officials that most deserve scrutiny.

Just 4 percent said misbehavior "off the clock" was the biggest failing while about one in four said, "it depends."

We then asked which chamber has the upper hand as the session enters its final days. Almost three in five said the House is winning while one in six had the two tied on their scorecard. One in ten said the Senate is ahead.

For our final two questions, we revisited a topic first explored at the end of the previous legislative session: Who has the upper hand, the Tea Party or moderate Republicans?

Nearly half the insiders said the Tea Party's influence is stronger than two years ago. Another 27 percent said the group is weaker and 23 percent didn't think its influence has changed. 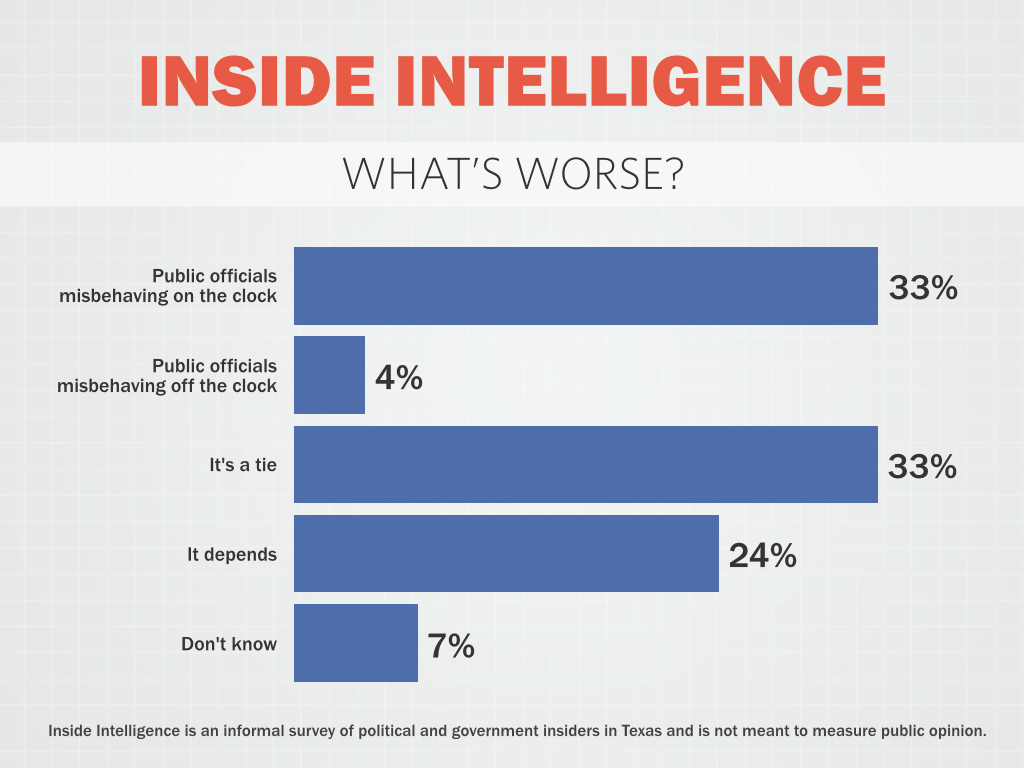 Here's a question prompted by the folks with secret cameras lurking at the Capitol: What's worse?

• "Times have changed. Public officials have always been considered to be pubic property, it's just that the technology of today coupled with the disappearance of the media's unseen rule about not going after pubic officials has created an environment that is without boundaries or rules. What you get is what we see."

• "Why is it legal to video/record someone without them being made aware? What public policy good comes from legal entrapment?"

• "It is easy to take statements out of context to create a questionable narrative. Any snapshot in time placed in a different scenario can appear far more extreme than in the original circumstances. I regularly asked my kid who was always 'telling on the teacher' — 'what happened just before that?'"

• "If it doesn't relate to or affect their legislative work, then it ain't nobody's business but their own. If it does, then it doesn't matter when it occurs — string 'em up. Either way, the camera dorks need a ride out to West Texas." 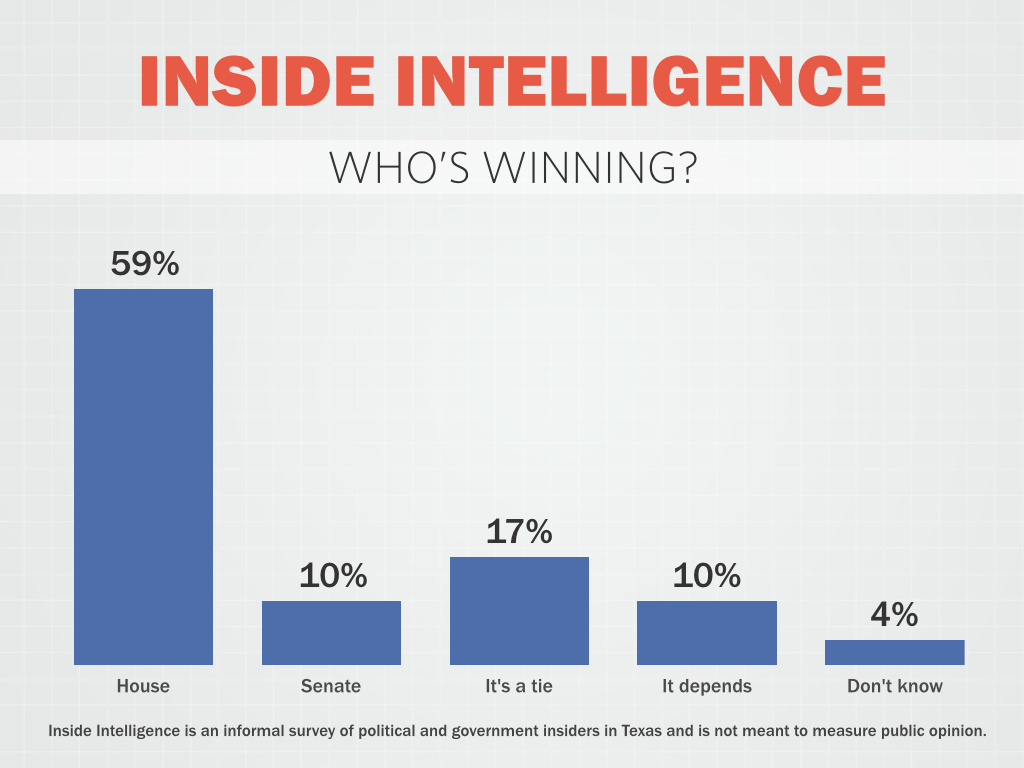 • "I don't know who's winning but local control and trust in the electorate are losing."

• "By the end of the veto period, they'll all be claiming victory and fellowship. Outwardly. Inwardly, they'll still be seething."

• "The House had this deal sealed when they re-elected Joe Straus the Speaker of the House. Speaker Straus assured that win a little more when he appointed Dennis Bonnen the Chair of Ways & Means." 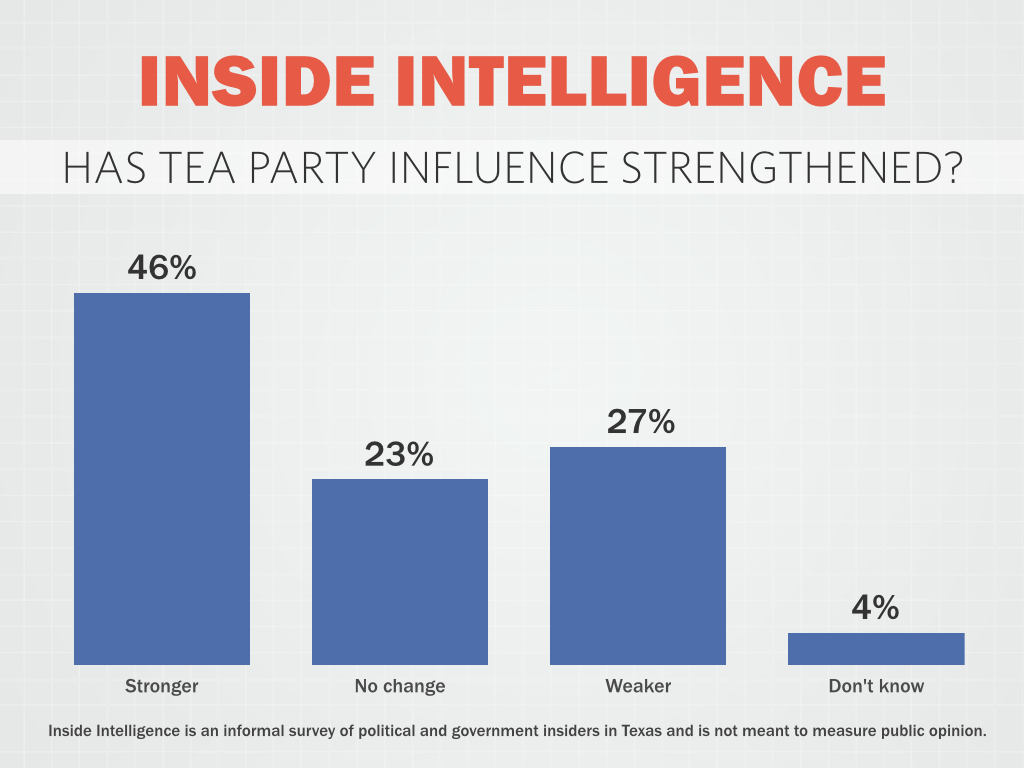 How does the influence of the Tea Party wing of the GOP in the Legislature compare to two years ago?

• "More of them theoretically, but influence waning. They help decide elections but like the proverbial dog that catches the car, don't quite know how to govern and often come off looking bizarre or out of the mainstream."

• "Lots of members still cater to them, but I don't see that they've necessarily increased their power. They still play at the fringes."

• "No change (maybe weaker) in the House, but much stronger in the Senate."

• "When Ron Simmons gets attacked and stands his ground, they are losing." 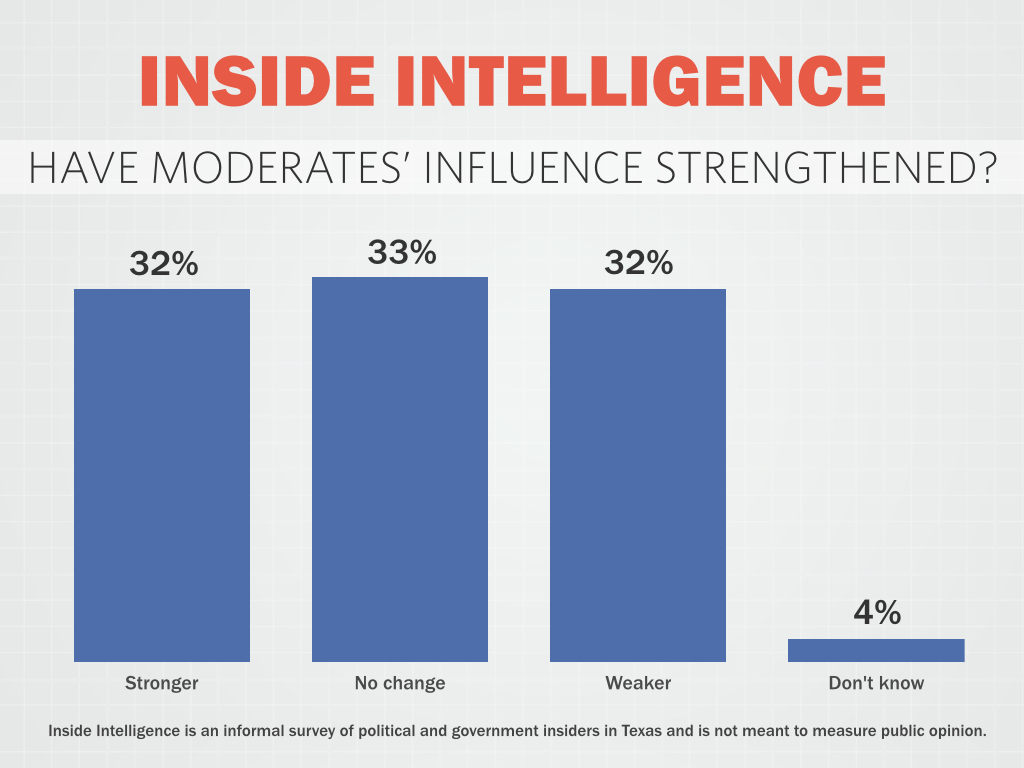 How does the influence of the moderate wing of the GOP in the Legislature compare to two years ago?

• "Texas' GOP 'moderates' would be considered hard core conservatives in other states. It's not like our alleged moderates are cut from the same cloth as Massachusetts Republicans."

• "Moderate is the ubiquitous pejorative adjective used by the paid minions of billionaire libertarians toward all those who won't kowtow to them. Call them what they are: Conservative REPUBLICANS."

• "'Moderate wing' really just means the members who actually have a say in running the state. Legislation is built on compromise. The same leaders generally emerge."

• "The more people in the Legislature change, the more things stay the same."

• "The Cardinals are ruling in the House."