For this week’s nonscientific survey of insiders in government and politics, we asked them to grade Greg Abbott on his emergency items as well as evaluate the substance of Jonathan Stickland and the likelihood of tax relief that Texans can feel.

For the most part, the insiders are withholding final judgment on Abbott's performance in delivering on his emergency items. On four of the five emergency items — border security, ethics, higher education and transportation — a plurality gave Abbott an incomplete.

The exception was early education, where nearly half the insiders gave Abbott either an A or a B.

With a couple of weeks left in session and the three weeks beyond that for Abbott's veto period, the high incidence of incompletes makes sense. We'll say for now that Abbott is at the midterm. We'll check back again in a few weeks to see what the insiders' final determinations are.

A majority of the insiders — 57 percent — didn't feel that any of these emergency items would trigger a special session.

And with talk of tax cuts dominating the discussion this week in the Legislature, we asked the insiders if the end result would be tax relief that Texans would feel.

Nearly three-fourths said no, while a bit less than one in four said the tax relief would be something that could be felt. 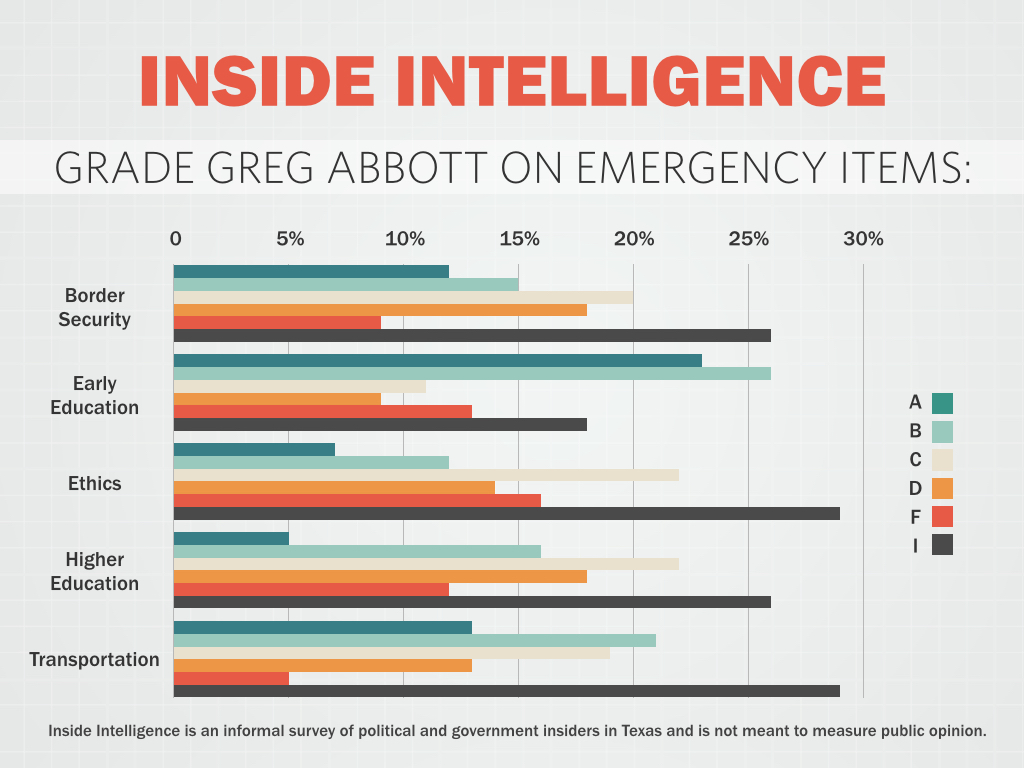 • "Some believe the governor is not a glad-handing, back slapping legislative animal. Others believe, his judicial training and background creates a starting point based on attorney-client privilege, not a get-along-to-go-along posture. In deference, giving the benefit of the doubt is certainly appropriate."

• "The red meat primary issue (Border security) has been secured. The only thing left in the agenda is not to screw up."

• "We may, surprisingly, see a real fall-off from his predecessors in terms of leadership. I was expecting more, frankly."

• "Abbott has been absent this entire session. While Abbott has capable people in Randy Erben, Jay Dyer, all orders are coming from Daniel Hodge. Since he doesn't have legislative experience, this lack of experience is having a detrimental impact on the Gov." 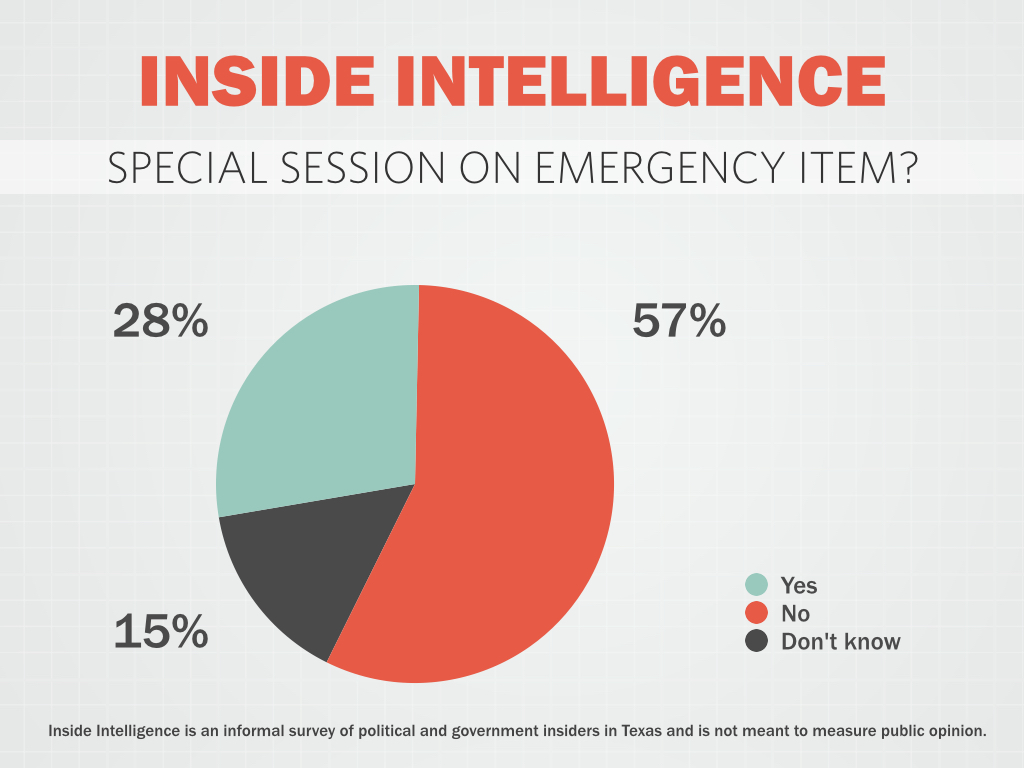 If the Legislature doesn’t complete work on any one of his emergency items, will he call them back for a special session?

• "Maybe border security, it is a hot button issue to those who support other state-wide elected officials."

• "But going back for tax relief is a huge gamble if a reduced revenue estimate provides no tax relief. Read carefully between the lines of the Comptroller's recent comments on funding needs."

• "He's a new Governor with three things at his discretion: appointment authority, veto power, and ability to call a Special Session. He's got a pen and he'll show he knows how to use it."

• "If he calls them back for a special session, it will be for budget and tax, not for these emergency items. Either the emergency items will pass in some form, or he'll wave them off." 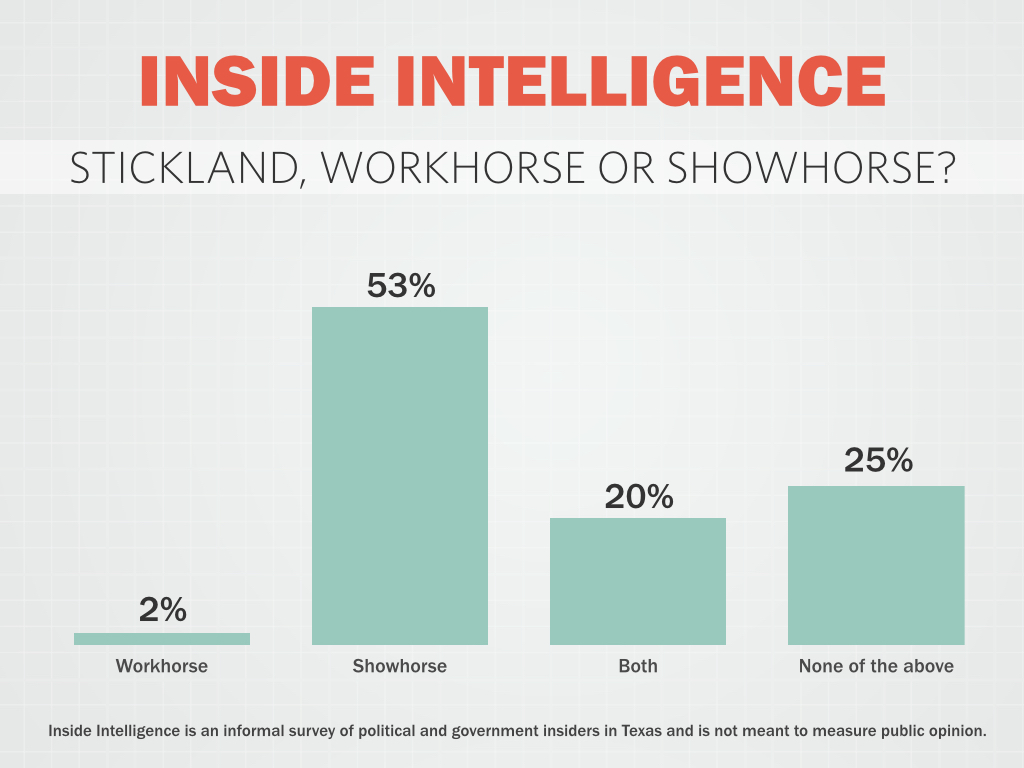 • "He works hard for his folks, his constituents, like-minded Reps and those like-minded interest groups outside the capitol. However, history shows us the enthusiasm for this movement will fade as it is incorporated into the main stream. Recall the TEA party started out as a conservative ECONOMIC movement but has more and more begun to reflect conservative SOCIAL issues as well, same song, next verse."

• "He's done some homework (albeit not well), but his motives are for political favor."

• "He's a show horse, but so is TMF — Stickland is portrayed in the media as ridiculous when he goes into his Don Quixote routine but TMF is portrayed as some kind of hero — the 'bull of the Brazos,' The job of legislators is to work with others to pass legislation — neither of them does much of that — they are both obstructionists, but only one of them is given a lot of grief over it."

• "An earnest youngster who is getting his nose bloodied in the real political world. He'll be better off for it, if he has the sense to learn the lesson that even though he thinks he is right all the time, no one else does. It's always better to listen to the other side. He is at risk of becoming a cartoon."

• "I am not sure anyone can really figure out what Stickland's point is or what he is trying to accomplish. It appears he is just trying to insert Chaos." 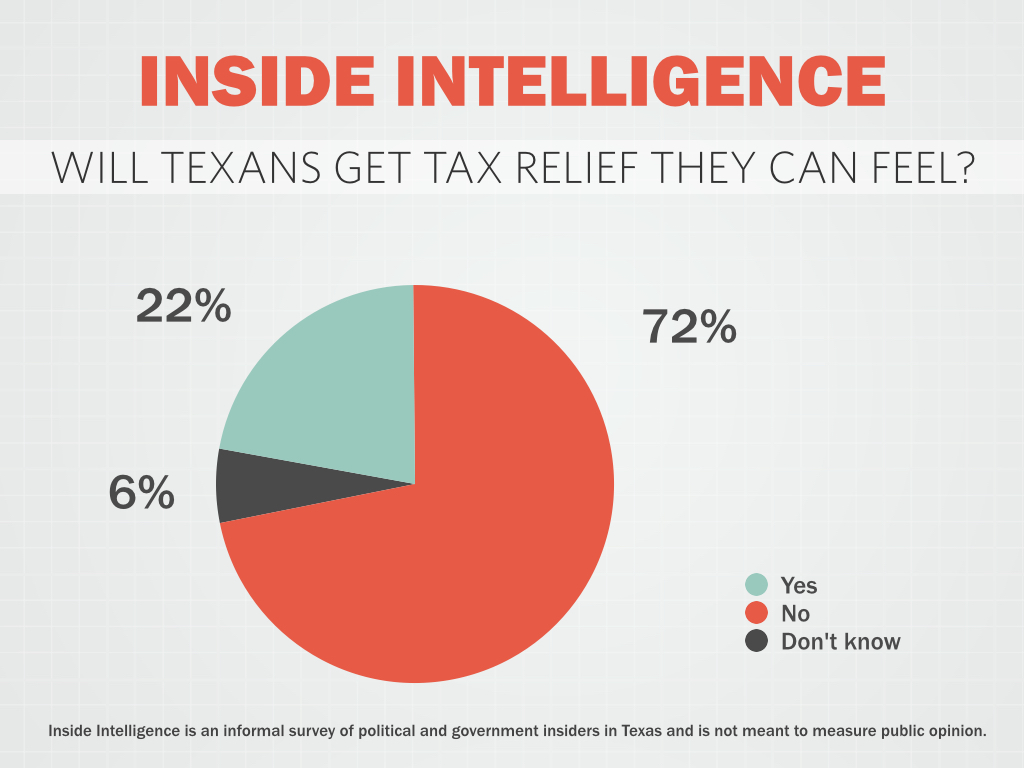 Will the Legislature give Texans tax relief they can feel?

• "If the House backs the Senate property tax reduction. The House sales tax cut will give most tax paying families happy meals for all. The proposed reduction is comical."

• "If they get a sales tax cut, those Texans who care to look at their receipt may 'feel' it in that sense. No one will feel any of these tax cut proposals in their standard of living, however. The cuts are all basically fluff but help keep down the size of government."

• "Tax relief will be approved, but it depends on your definition of 'can feel.' I may not 'feel' $200/annually, but another person would be elated to see $200/annually."