For this week’s nonscientific survey of insiders in government and politics, we asked about the odds of a special session this summer.

A strong majority of the insiders pegged the chance of lawmakers spending some extra time in Austin at even odds or less. Fully 35 percent believed the odds are 20 percent or less and another 35 percent calculated the odds as between 21 and 50 percent.

Another 20 percent put the odds at between 51 and 80 percent. And 9 percent were nearly certain lawmakers wouldn't get everything done they will need to, putting the odds of a special session at higher than 80 percent.

There was little doubt as to what would spur an extra session. Three in four said budget and taxes would be the cause. One in four thought education and pre-K would trigger the special. Interestingly, no one thought ethics would cause more meeting time for lawmakers despite recent debates on the issue tagged as an emergency item by the governor.

We closed with a question asking what Magic 8 Ball response best describes whether the House and Senate have patched up their differences. The biggest group — 43 percent — said "Outlook not so good," while 40 percent said "Ask again later." Be sure to check out the insider-supplied suggestions on this one. 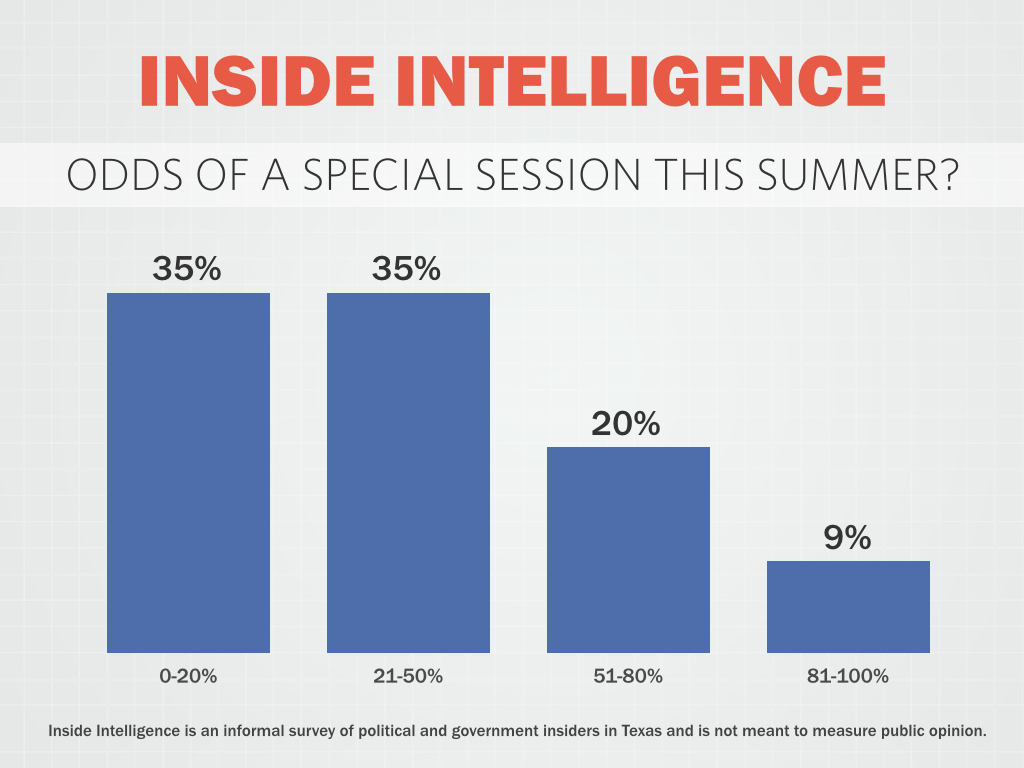 What are the odds of a special session this summer?

• "The biggest problem with a special session is the Comptroller will need to redo the revenue forecast. I suspect the number would be lower, potentially killing the tax cuts that might necessitate going to a special session."

• "Very low. If they hate each other so much, Abbott will have to give them time to let the dust settle."

• "IF there is a special session in this biennium, it will be very soon. No way they will let this show holdover into an election year."

• "If the tax reform messes up the budget, we will be back. As to whether it will be in the summer depends on the new governor's understanding of how the special session game is played."

• "I bought my vacation cancellation insurance policy, didn't you?" 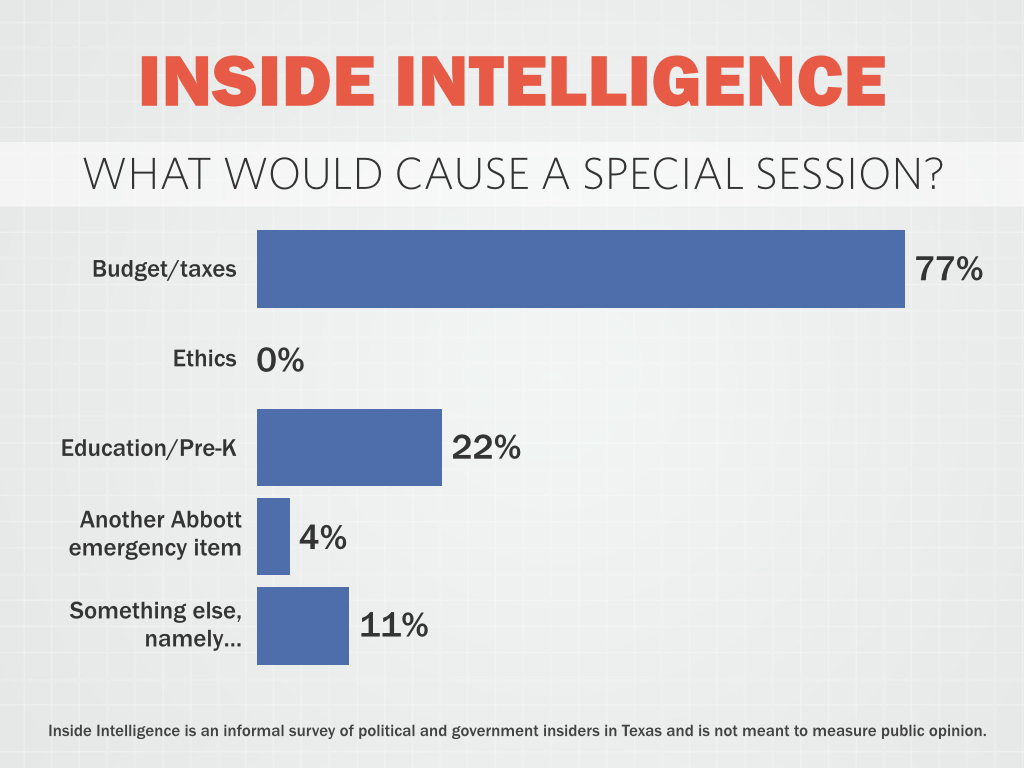 If there’s a special session, what would cause it?

• "I believe the Governor will call a special session on Redistricting."

• "Only public school finance by court order will send this bunch back in before 2017..." 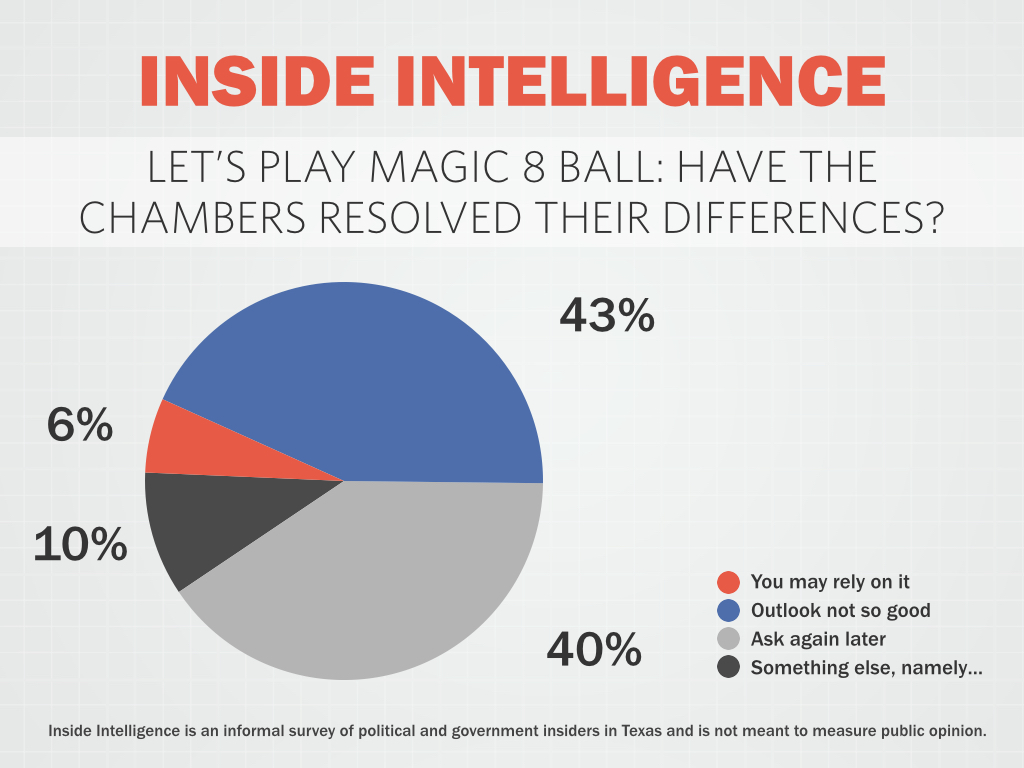 News reports this past week gave differing accounts of how well the House and Senate are working together. Let’s play Magic 8 Ball: have the chambers resolved their differences?

• "Both chambers are working with each other. The media is bored and making stuff up to fill their newspapers and websites. In other words, the media is trying to generate excitement of a rather boring session. News flash: the process we are seeing today is the same process which has taken hold for past sessions."

• "Outlook not so good at moment but you would think that a Republican Administration would get it done — and I'm hearing that may be the motivation needed — Republicans worried about re-election."

• "Patrick's problem isn't his shaky math, it's that he wants to pick a fight with Gov. Abbott."

• "Let's play another game, Legislative Monopoly and the House owns Park Place and Boardwalk with 3 hotels on each, 2 Railroads and the Electric Company and the Senate has no get out of jail free cards."

• "You left out the possible Magic 8 Ball responses of 'Don't Count On It,' 'Better Not Tell You Now,' and 'My Sources Say No' — all of which are applicable."