We started off this week’s survey of politics and government insiders with a question about the political future of Leticia Van de Putte, the former state senator and Democratic nominee for lieutenant governor now running for mayor of San Antonio.

Early voting in the May 9 contest begins Monday. And with current Mayor Ivy Taylor and a couple of other former officeholders — Texas House alum Mike Villarreal and former Bexar County Commissioner Tommy Adkisson — in the 14-person field, we asked what the future holds for Van de Putte.

Another 10 percent thought she's going to lose the election and then run for something else.

As a follow-up, we asked for the insiders' thoughts on how selected issues will move the needle with voters in the Alamo City. Two in five cited gentrification and downtown development issues. Almost as many named police and fire contracts. Trailing behind were the minimum wage (20 percent), the city's nondiscrimination ordinance (18 percent) and the status of ride-sharing businesses, like Uber and Lyft (16 percent).

Pivoting to the state contracting fiasco at HHSC, 52 percent of the insiders thought the blame will fall on the state agencies while another 31 percent thought the office of the previous governor — i.e., likely presidential candidate Rick Perry — would be held responsible.

We closed by asking about the latest kerfuffle in Texas' relationship with the federal government — this time over the feds' move to pressure the state into expanding Medicaid under the Affordable Care Act by threatening to withhold dollars currently helping hospitals treat patients who are unable to pay for care.

The insiders were almost evenly split between saying the state would not capitulate even if it meant losing hospital dollars (37 percent) and saying the two sides would figure out a compromise position (36 percent). Another 25 percent thought nothing would be decided immediately and that things would stay as they are until the next legislative session. 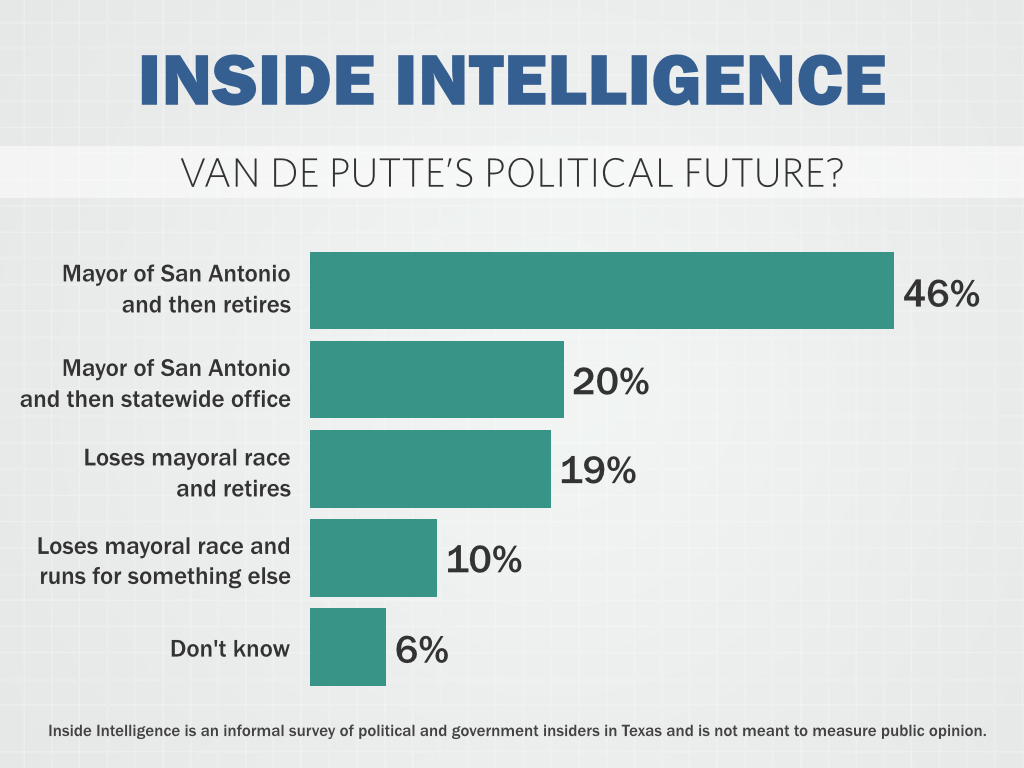 • "She is a true Texan, too valuable a public figure to retire from politics and she is the same gracious person I first met in 1991. I would beg her not to take the HUD Secretary position if it is offered, it is the Democrat 'minority' cabinet position. She could better serve elsewhere, Secretary of Commerce is more in line with her skill set."

• "She will probably win but she was an awful statewide candidate and she has a weak resume. She won't win another election in Texas and even if Hillary is elected president, there is no place to put her."

• "Left off other choice. Mayor of San Antonio then cabinet appointee for President Clinton." 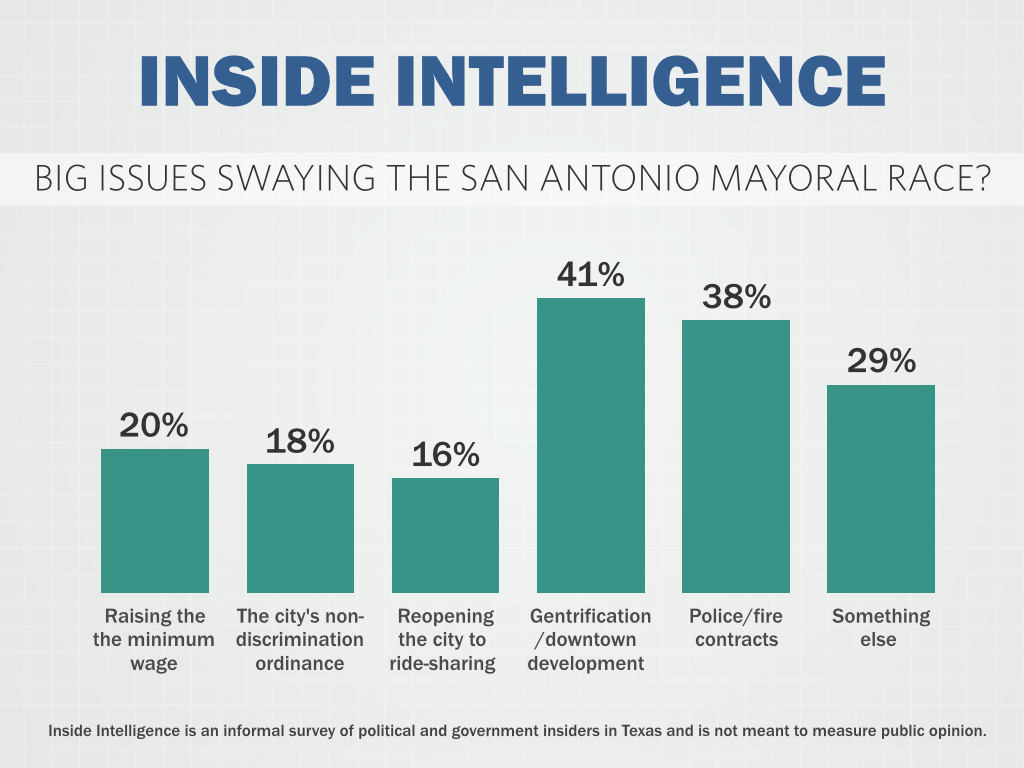 Which issues will sway San Antonio voters the most when picking their next mayor?

• "I grew up in San Antonio and most people care more about the Spurs bench players than they do about city politics. Mayoral races are inherently difficult to predict because it's such a small electorate. I don't think an issue will sway voters, more than which candidates get their people to turn out."

• "The city faces the same dilemma any other city headed by any Democrat mayor, progress at the expense of their political base, same song, next verse."

• "Economic development - bringing higher paying jobs to SA and providing the educational and training opportunities to do so. Uber/Lyft are being pushed by local and state lobbyists as more important issues to the city than they really are."

• "I can barely keep up with what's going on in the Capitol and you want an opinion on a non-legislative election in a city an hour away (on a very good day)?" 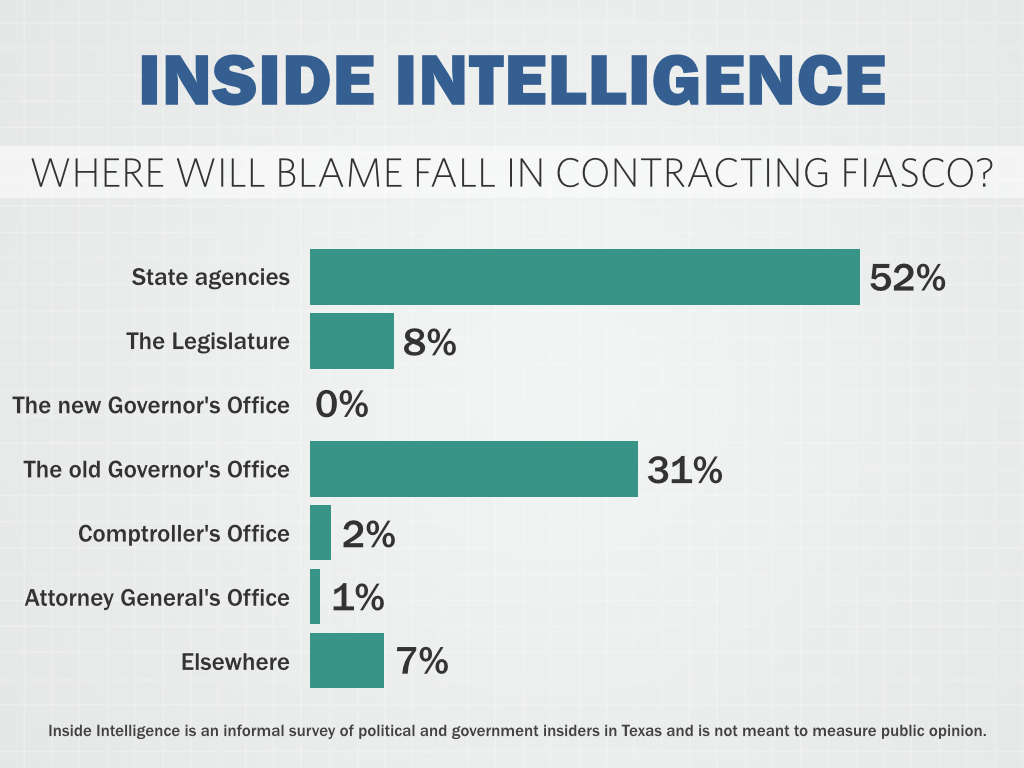 A House panel is launching an inquiry into contracting practices at 11 state agencies following the HHSC fiasco. On whose doorstep will the blame for the state’s contracting problems ultimately fall?

• "There were a number of bills passed last session that attempted to do the very thing the Legislature is investigating, expanding the no bid list, favoring Texas headquartered companies, etc. The blame lies with the individuals, not the procurement/contract process itself."

• "Of what political benefit is it to blame the guys who are no longer there? Not likely to blame the new guys. And we're (the Lege) sure not going to claim the blame. Let's get those all those darned bureaucrats, guilty, or not."

• "The old governor used to 'approve' contracts over $100k. Something they don't want you to know." 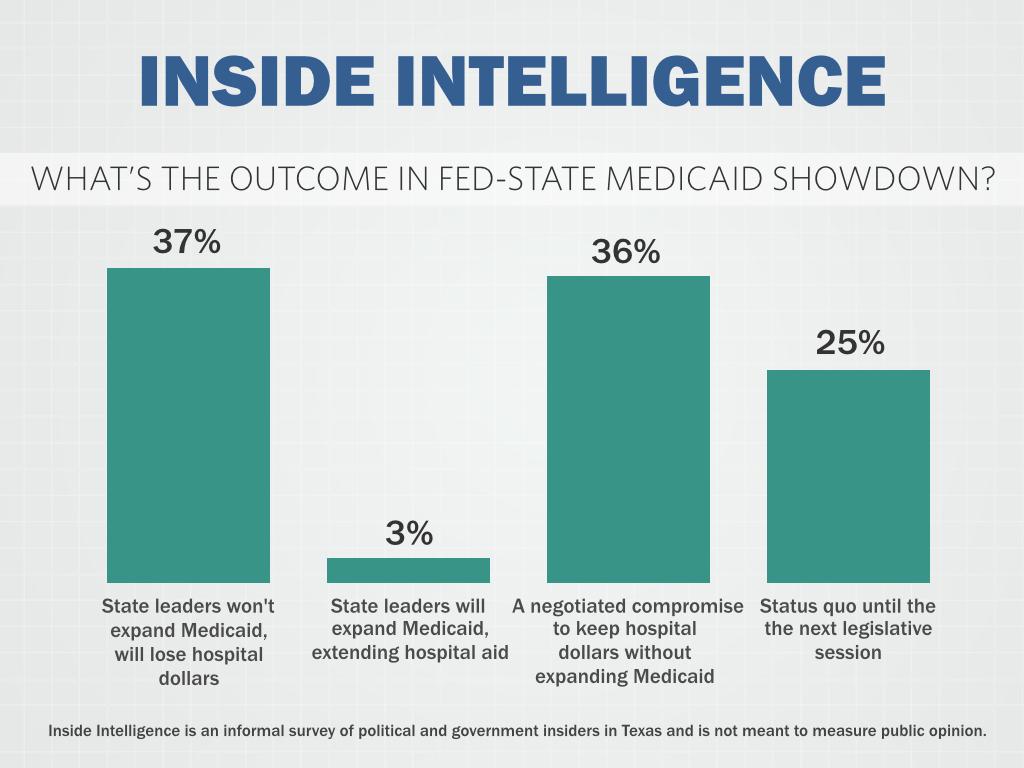 The federal government is pressuring Texas to reconsider whether to expand Medicaid to cover childless adults by threatening funding for hospitals. What will happen?

• "Yeah, because Texas generally gives in to pressuring from the federal government. The correct answer is Texas will file suit to maintain its FREEDOM. And probably lose. Again."

• "Consider it the cost of Texas being left alone to do its own thing. In other words, it will gladly surrender federal dollars to avoid being compelled to act in a manner it deems not Texan and responding to federal threats is not Texan."

• "Consequences are catastrophic for safety net and community, rural hospitals, and thus profound economic local consequences. Tragically, political consequences will be diffused by time and distance, and will lag the closures by one cycle."

• "They've each drawn their own political line in the metaphorical sand. On to litigation."