We started off this week’s survey of politics and government insiders with a question about the proposed update to Texas' religious freedom law before the Legislature this session.

It's a constitutional amendment designed to strengthen the law already on the books. Opponents, including high-profile business advocates like Bill Hammond, say the effort could make Texas look like it condones discrimination against gays and lesbians and hurt its national standing.

The vast majority of the insiders agree, with three-fourths of the respondents saying that lawmakers should not update the law.

For the next question, we asked if the insiders thought the Texas-Mexico border is safe. We thought it would be interesting to test that assumption because where you fall on this question goes a long way to inform where you might stand on lawmakers' push to boost border security efforts.

Much has been made recently about the House and Senate and their dueling messaging on how tax relief should be shaped this session. Two in five of the insiders thought the House has the upper hand on messaging while 13 percent thought the Senate is winning the PR war.

Nearly one in three thought that neither side is winning while one in 10 thought both sides are winning.

And now that Hillary Clinton is officially a candidate for president in 2016, we asked what effect she might have on Texas Democrats next year.

About two-thirds thought an effect would be to take campaign cash from local donors. The next biggest effect, listed by 44 percent of respondents, would be to raise the national profile of Texas Democrats, such as Julián and Joaquín Castro.

Boosting Hispanic turnout was cited by 36 percent of respondents with another 24 percent saying that Clinton would energize candidates to enter down-ballot legislative races. 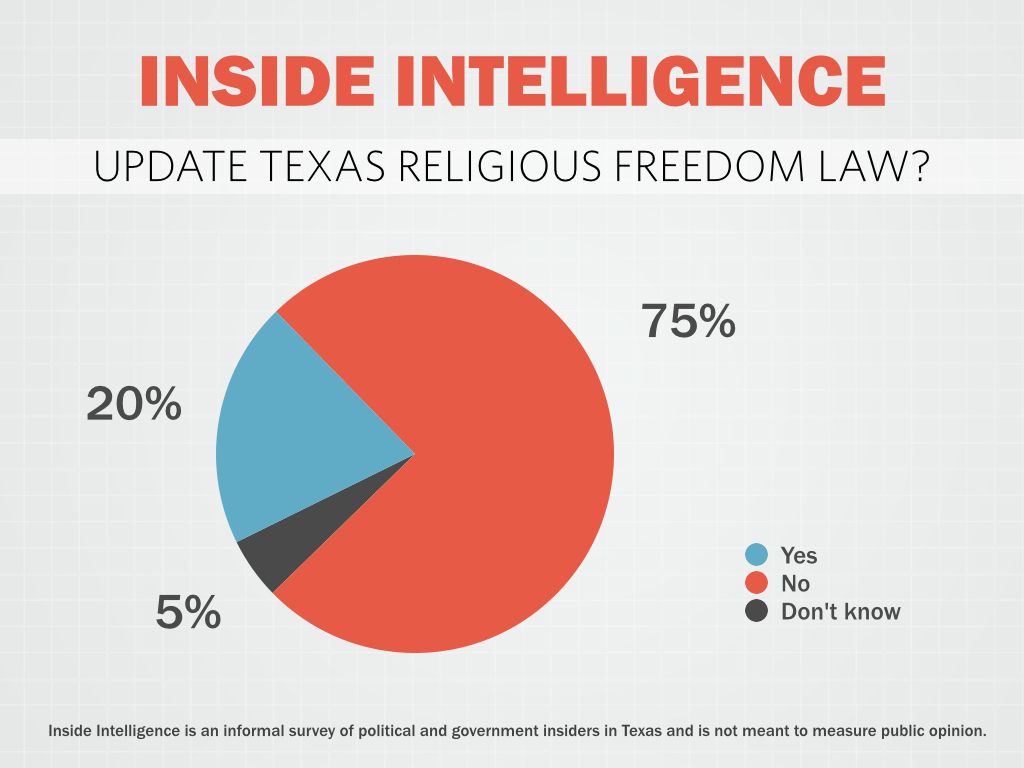 The Legislature is considering a constitutional amendment that says government “may not burden in any way a person’s free exercise of religion” unless there’s a compelling interest at play. Should the Legislature update Texas’ existing religious freedom law this way?

• "On the one hand I thought this was already a person's right, on the other is stories I see with increasing frequency about people's lives being destroyed as they practice their religion publicly. And then there's the whole poor sisters and birth control issue. At the end of the day, I simply don't know but I think I'll convert to Rastafarianism should this pass as they would seem to benefit most from this change."

• "If this were about religious freedom - absolutely. But it's not. Otherwise you'd have business owners turning down business from couples who live together before marriage, have children out of wedlock, have never cheated on each other, etc. This is about hiding behind the Bible to discriminate against gay couples."

• "What better way to test the will of the people of Texas on this issue than to put it on a ballot?"

• "What's wrong with the RFRA law we have? Advocates for change have not made a case for expanding it." 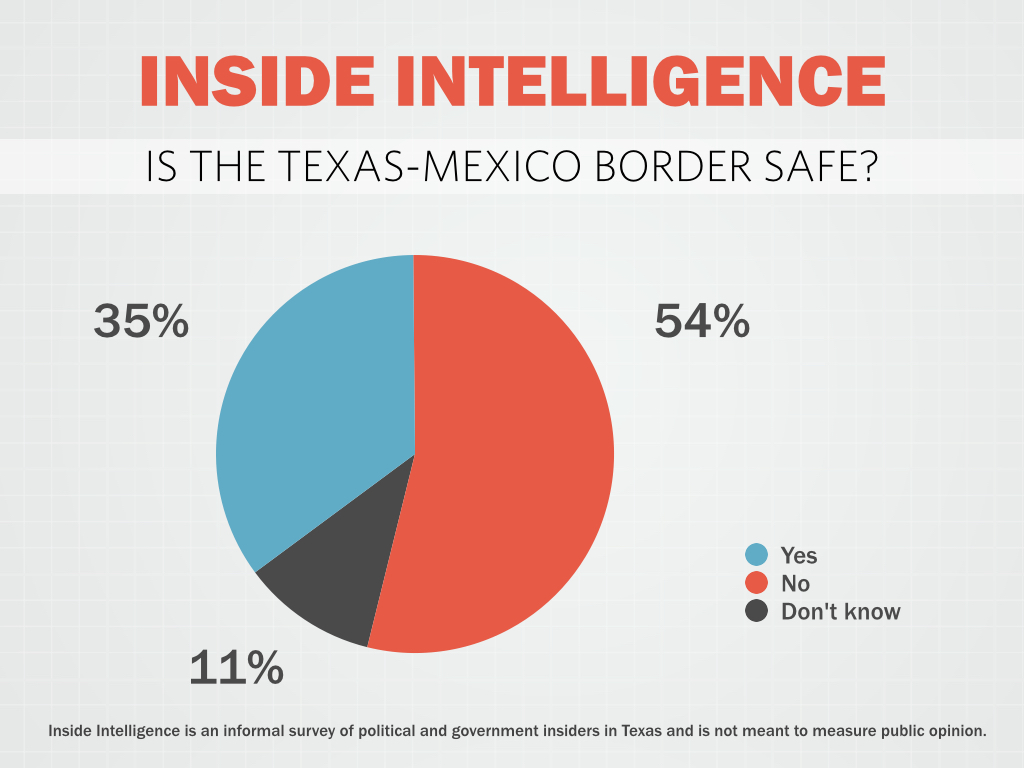 Lawmakers this session have argued for increased funding for border security to fight spillover crime and human trafficking. Critics have argued back that state leaders are overhyping what is a problem — the nation’s immigration system — that is best left to the feds. Is the Texas-Mexico border safe?

• "Of course border security is a federal problem. But in the absence of any federal action, Texas must act in the interest of self-preservation. Many areas along the border are a dangerous place and the threats are beginning to permeate the state. Bold action is needed."

• "Ask any rancher in South Texas - this border is not safe."

• "The border is as safe as it has ever been. Another solution in search of a problem."

• "There is so much argument on both sides of the issues, it's tough to know how truly safe it is. As a matter of caution, I would be reluctant to spend a great deal of time there."

• "Like most Texans, I do not travel to the border much or into Mexico at all anymore due to the random violence. I miss it very much."

• "Who knows? The Tex-Mex border is too big to make blanket statements like that." 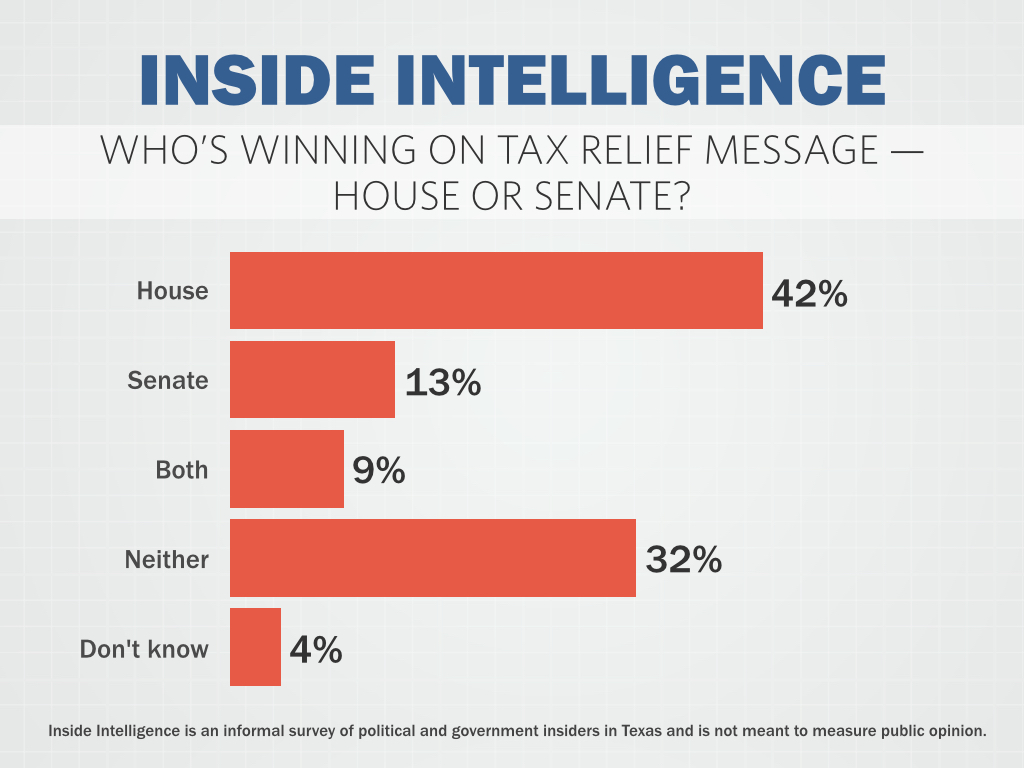 Who’s winning the PR war on tax relief — the House or the Senate?

• "At the end of the day, Texas will have tax relief and both chambers and Texas taxpayers will win."

• "How could either side be winning when nobody outside the Capitol complex is paying attention?"

• "It seems to me that all they are doing is guaranteeing themselves a special session on the budget."

• "The echoes are too loud within the Capitol to know how the shouting is being received outside."

• "The Senate is, but don't count the House out yet. The sales tax cut is the best and most equitable way to cut taxes."

• "Senate's message is populist appeal. House's message is more than a soundbite, but is better policy and likely provides more tax relief." 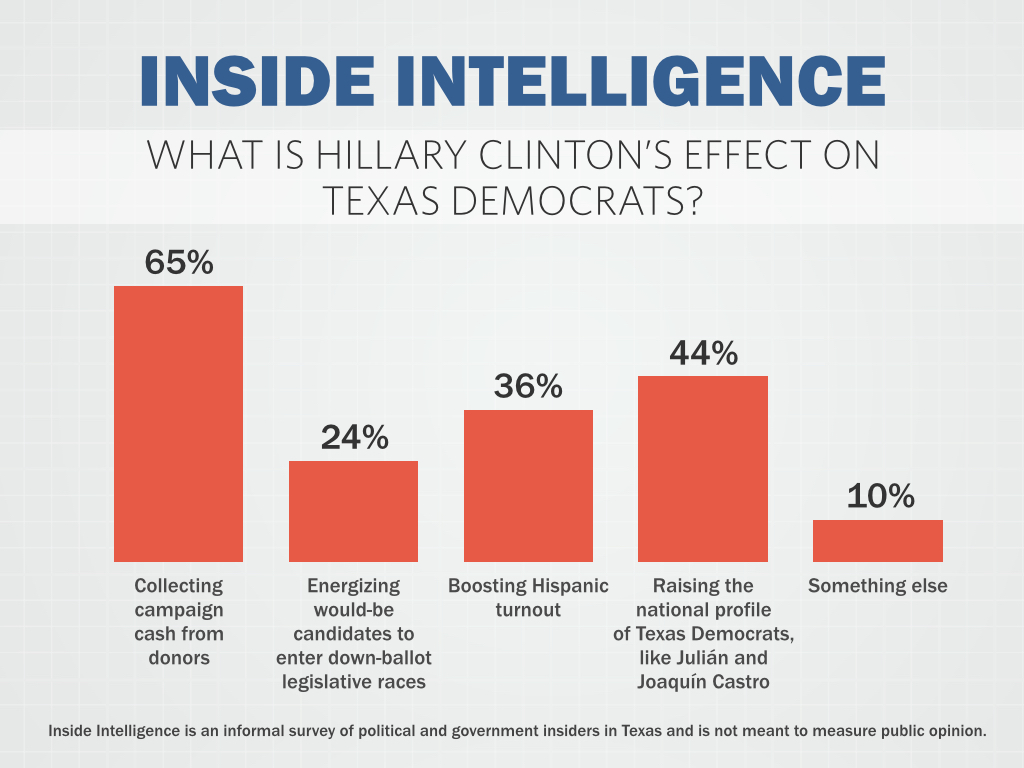 What is the impact of Hillary Clinton’s 2016 presidential campaign on Texas Democratic politics?

• "The Hillary Clinton campaign will have the same effect as the Wendy Davis campaign - lots of promise and very little return for Texas Democrats. The only winners in Texas will be paid political consultants who reap the benefit of raising lots of money here and those who trick donors into funding another failed 'grassroots' campaign."

• "Energizing the entire Texas conservative base under the 'oh, hell no' flag."

• "No doubt the trial attorney ATM machine will be tapped in Texas. Beyond that, let's first see if she actually secures the nomination."

• "Dems are so far down nothing is going to energize Texas Dems."

• "Democrats just had a woman at the top of the ticket to 'energize' them and we all know how that turned out. If Hillary picks Julián as her VP, that might give the Dems a little bump, but not so much as anyone would notice."