A day before tens of thousands of residents of Ciudad Juárez celebrated the music of hometown hero Juan Gabriel last month, residents of nearby Guadalupe Distrito Bravos were throwing clumps of dirt onto the coffins of Elmer and Edgar García Archuleta, brothers who were murdered late last year, as they were laid to rest across the border in Fabens, Texas.

After years of bloodshed, pockets of northern Mexico have become safer, but instability still reigns in areas of Chihuahua state and continues driving people north for their own safety. That's the assessment from El Paso immigration attorney Carlos Spector, who has represented more than 300 Mexicans seeking safe haven in Texas.

Recently he added 30 members of the Archuleta family to his client list after they fled the Guadalupe Distrito Bravos area, which sits across the Rio Grande from El Paso County, late last year.

The deaths of the brothers and their cousin, Gabriel Archuleta, were the latest violent acts that have residents of the town about 30 miles from Juárez fleeing to Texas in droves. As they seek asylum, the family waits for the remains of Gabriel Archuleta to be identified by forensics experts. He’ll join his cousins in the Fabens cemetery when that happens.

“They haven’t confirmed the DNA, but we’ll be having another funeral for him in another month or so,” said Spector. 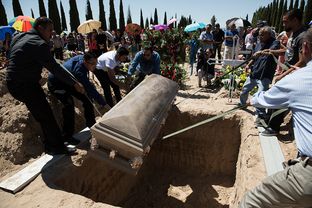 Enlargephoto by: Ivan Pierre Aguirre
The funeral for brothers Elmer García Archuleta and Edgar Ivan García on March 27, 2015, in Fabens.

The Archuleta killings are likely the result of the war between the Sinaloa and Juárez drug cartels, which Spector said continues despite the Chihuahua state government's proclamations that it is over.

“There was a spate of killings that began — from what I can determine — September 26th, and they just haven’t stopped since then,” he said.

Spector told The Texas Tribune in November that based on city tax records, he estimated that the town’s population has dwindled to 2,500 from 17,000 in 2008. The hundreds who have fled are among thousands of Mexicans who have sought shelter in the United States. In 2013, 9,370 Mexicans sought asylum. In 2014, 8,840 did the same, according to the U.S. Department of Justice's Executive Office for Immigration Review.

The murders of the Archuletas are the latest in a string of assassinations of family members dating back to at least 2010, when the Mexican town’s lone police officer, Erika Gandara, was killed. She brought attention to the city’s problems, said Spector, and paid the ultimate price. Five years later her half-brother, Gabriel Archuleta, and her cousins, Elmer and Edgar Archuleta, were murdered. Elmer Archuleta was a well-known student and activist, which helped make him a target in the war-torn community.

The man allegedly behind the killings is Mauricio Luna Aguilar, who goes by the moniker “El Papacho,” Mexican media reported. He was the purported lead hit man for the Sinaloa cartel, which began a bloody war with the hometown Juárez cartel in 2008.

Luna Aguilar was arrested in February, but Spector claims that was nothing more than a public relations stunt by state authorities, who claimed the arrest meant the killings would stop. But the continuing violence means otherwise.

Oscar Hagelsieb, Immigration and Customs Enforcement’s assistant special agent in charge of narcotics, strike force and intelligence operations, said residents of the emptying town should brace for more bloodshed as the Juárez cartel tries to reclaim its turf after Sinaloa boss Joaquin “El Chapo” Guzmán was captured in the Mazatlán, Sinaloa, last year. 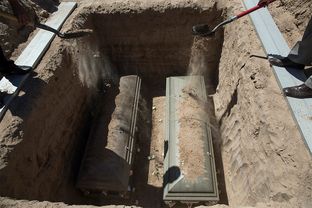 “The people that have been working for the Juárez cartel either got killed or just moved out of that area,” he said. “But I think the turning point and what’s directly responsible for the recent spike in violence is the fact that Chapo Guzmán gets arrested.”

Hagelsieb said Guzmán’s capture has also instilled confidence in his enemies in Chihuahua because he never had total control there or a complete monopoly over supply routes.

“They still remain strong in their traditional strongholds in Sinaloa and Sonora. But in the areas, for example the Valle de Juárez, they were dealt a blow psychologically,” he said. “It took the opposite effect on the people that were traditional Juárez cartel because they felt a rallying cry in that the Sinaloa cartel is not invincible. Whether it’s reality or misconception, they felt that Chapo was protected buy the federal forces."

But they’re not going away so easily, he added.

“All the manpower that they used, all the resources and all the influence they had gained, they aren’t going to let it go that easily,” he said. “That [smuggling route into Texas is] a very lucrative plaza. They are not going to go down without a fight.”

Meanwhile, the Archuletas wait on a surviving member of the family to be released from detention in Texas.

Victor and Gerardo have been released, but Spector said Rafael Archuleta remains in detention despite the attorney’s pleas.

“Mr. Archuleta fled Mexico when his brother Gabriel was found murdered, along with two other family members. Mr. Archuleta’s only immediate family member is his sister, Biririana Archuleta, who is also in the United States seeking political asylum,” Spector wrote officials at the El Paso detention facility. “Mr. Archuleta is also not a threat to national security nor does he pose any threat to the community. He has no serious criminal history in Mexico or in the United States.”

A spokeswoman with Immigration and Customs Enforcement said she couldn’t comment on the specifics of the case unless Archuleta signed a release.

"I think it’s one of the strongest cases I’ve had," he said. "They leave the town, and again, what makes it worse is that it's the persecution by the same cartel."