We started off this week’s survey of politics and government insiders with a question about how lawmakers might resolve the dueling tax relief proposals proffered by the House and Senate.

The Senate would make a cut in residential homeowner property taxes via a higher homestead exemption a centerpiece of this session's tax cuts. The House, meanwhile, would opt for a historic 0.3 percent reduction in the state sales tax rate.

A plurality — 43 percent — saw lawmakers opting to combine both proposals, with 36 percent believing that the Senate option would win out. Just 14 percent thought the House's proposal to cut the sales tax rate would end up the winning option.

We moved on to ask our insiders to handicap a trio of hot-button bills currently in the legislative process.

Two bills — one designed to prevent "sanctuary cities" in Texas and another reversing a state law extending in-state tuition rates to certain undocumented students who graduate from Texas high schools — are out of Senate committee and on their way to the floor.

The insiders were more certain on the prospect of legislation that would reform marijuana possession penalties. Seven in 10 of the insiders thought such a bill is unlikely to pass this session, while less than three in 10 thought it likely.

And the insiders felt most strongly about their prognosis on marijuana laws. A strong plurality  — 44 percent — termed passage as "very unlikely."

On the other questions, our insiders were a little more squishy in their responses. On the question of sanctuary cities, the "somewhat likely" option led the "very likely" option, 37 percent to 14 percent. On repeal of in-state tuition, the "somewhat unlikely" option was favored by 35 percent, well ahead of the 22 percent who thought it was "very unlikely." 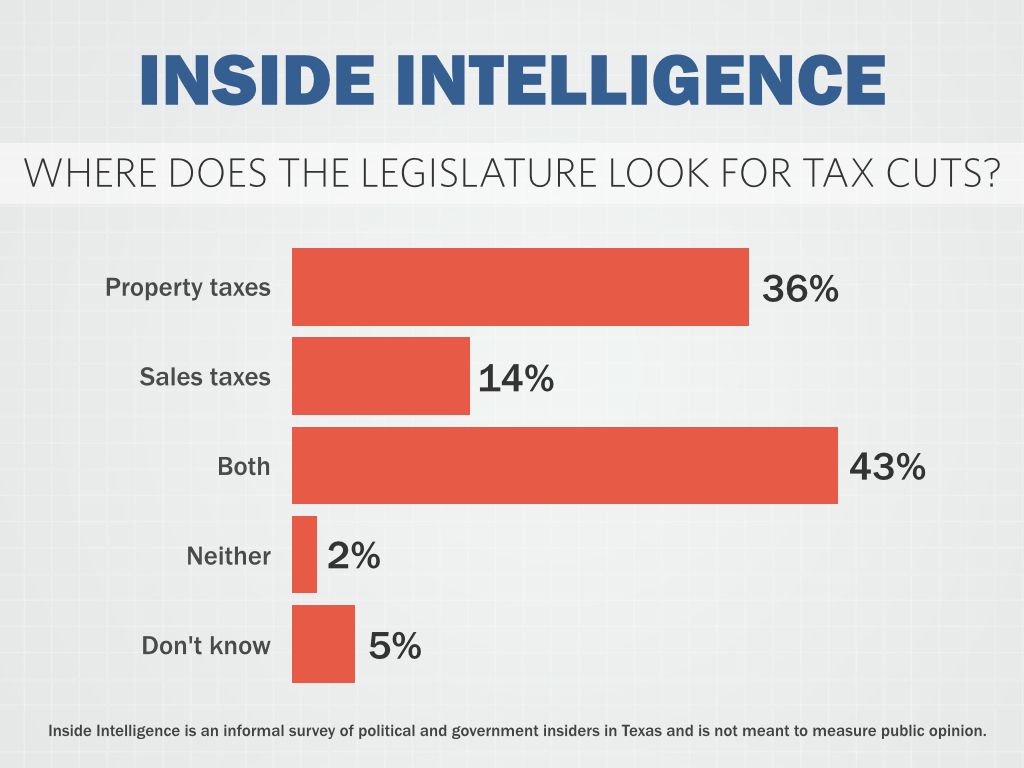 Senate and House plans for tax relief differ on where to look for cuts — property taxes or sales taxes. Where does the Legislature go on tax cuts?

• "They have already promised property tax relief, even before trying to understand it, but they will have to incorporate some alternative, such as sales tax, to appease business interests who correctly point out that they already pay over two-thirds of the tax burden."

• "The property tax cut won't do anything but add to state spending, whether it's subject to the spending cap or not. Plus, it shifts the burden more to business and gives nothing to renters. The sales tax cut is the most equitable way to cut taxes for all Texans, regardless of their financial means."

• "My best guess is a minimal reduction in property tax. The best for the state is to reduce sales tax. An added benefit is that a reduced sales tax will be felt by more voters on a more frequent basis."

• "One place they won't go, despite Big Business dreams, is an across-the-board property tax cut like in 2006. Members felt it wasn't appreciated." 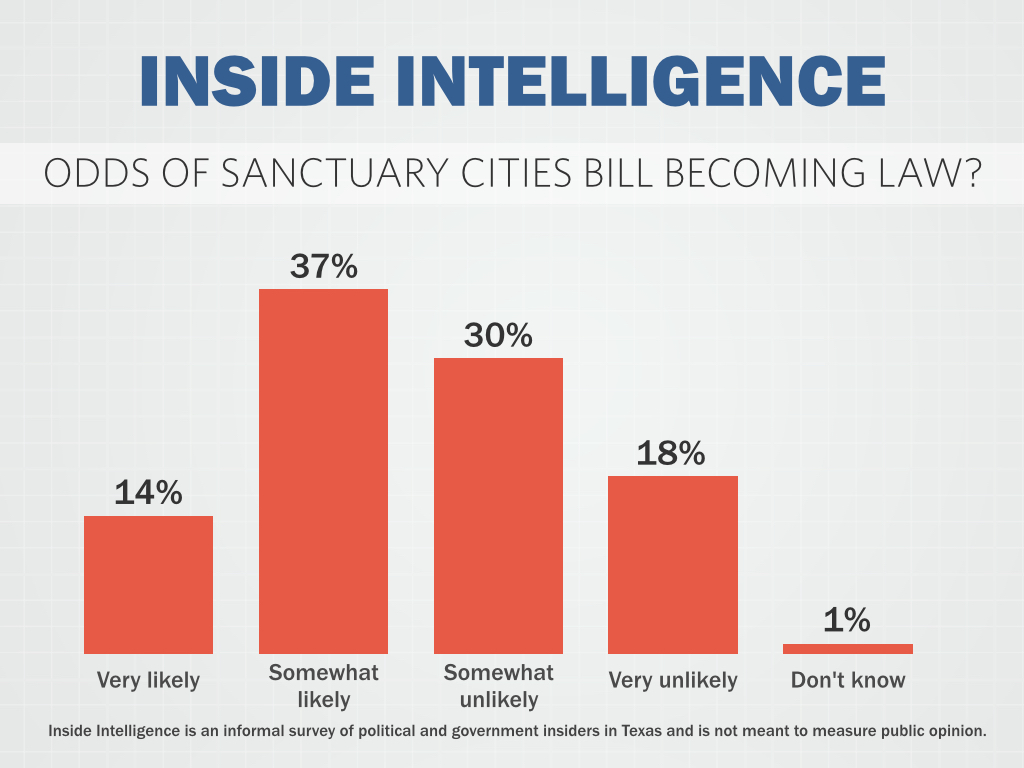 The Senate this week passed out of committee a bill that would penalize cities and other local governments for preventing police from asking for a person's immigration status during a detention or arrest. What are the odds of this bill, commonly referred to as a 'sanctuary cities bill,' becoming law?

• "The Senate will pass it and the Governor would eagerly sign it, but will the House play along? Might it be a bone thrown to the Teas in exchange for increased school funding?"

• "Seems reasonable enough, except that it'll be used for harassment."

• "For being a bunch of Christian conservatives, they aren't remembering well Matthew 7:12 (The Golden Rule)."

• "Talk about dumb. Tell me again how many cities currently prevent cops from asking about immigration."

• "Speaker Straus is the roadblock. No true reforms can happen until he's replaced. The rule of law — 'detention or arrest' — should mean something." 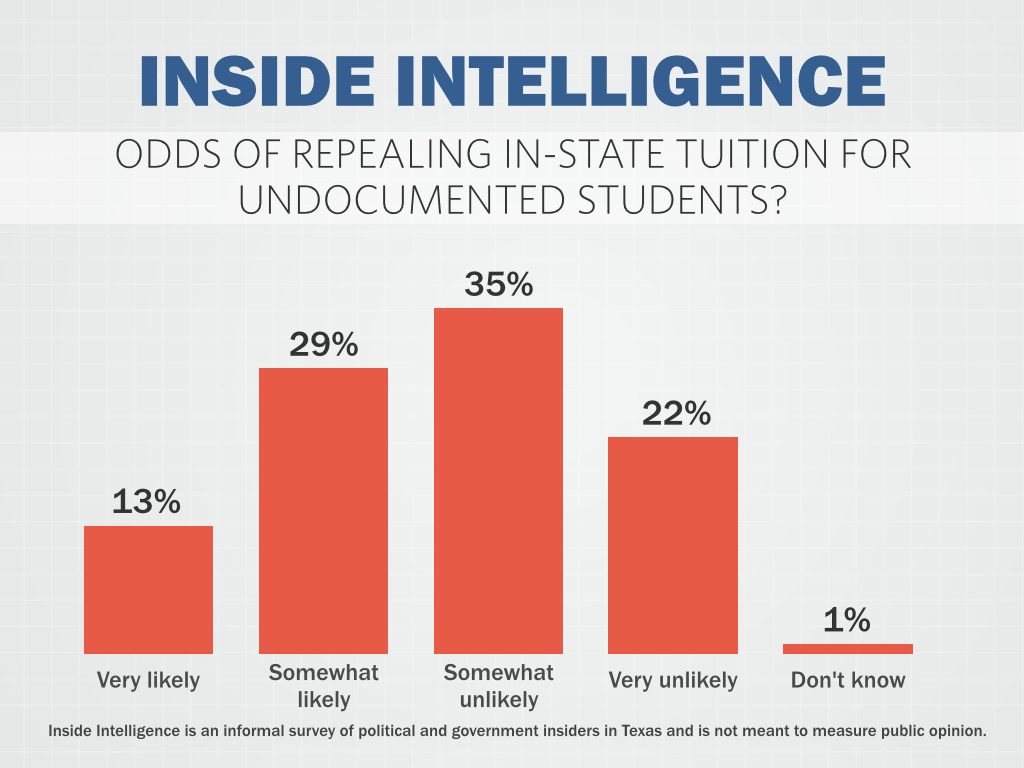 The same Senate panel also was looking at legislation this week that would reverse a 14-year-old state law granting in-state tuition to Texas high school graduates who aren't legal residents. What are the chances of success for this bill?

• "If common sense prevails, it will die. We talk about encouraging immigrants to become productive citizens. Who is more motivated to do that than someone who has graduated from a Texas school and is qualified to enter a Texas college (which is more than far too many 'legal' residents can say)?"

• "And the Senate is once again blocked by the House. Speaker Straus working a perfect game."

• "This should pass but it won't. Republicans will get scared. If illegal residents want to pay in-state tuition, they should apply for grants from their home countries for the difference between out of state and in-state tuition."

• "This one is silly. Everyone in Texas pays Texas taxes, since we're primarily funded by sales and property taxes, so the state support is being paid for by non-legal residents. Plus, if they're here, I'd rather those individuals be educated and have a chance at a good job instead of being government subsidized."

• "Abbott + Patrick will be enough to pass it." 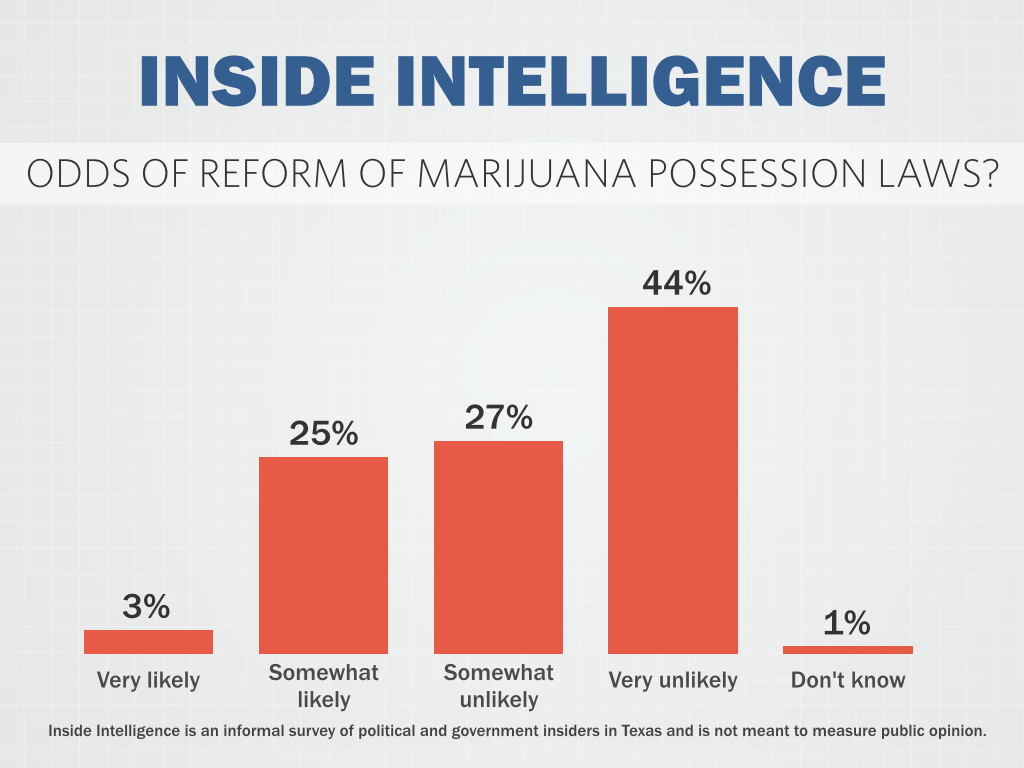 • "Legitimate legalization efforts are still a couple of sessions away but this step is a distinct possibility."

• "Maybe a tiny camel's nose for limited medical purposes. Everyone else can just drive to Colorado."

• "Legislators who support 'reforms' will put a political target on their future elections."

• "Unlikely. No one in power cares enough about it to make it happen. Public support is wide but not deep."