We started off this week’s survey of politics and government insiders with questions about a couple of reform projects being floated by legislators regarding the agency structure at HHSC and the enforcement authority of the Texas Ethics Commission.

First of all, a bit more than half of the insiders thought that recent contracting problems identified at HHSC have put a halt to consolidation efforts being pushed by some legislators. Almost 40 percent thought the scandals delay but do not halt those plans.

On the ethics issue, about 40 percent thought that Commissioner Jim Clancy's letter seeking help to bolster the Ethics Commission's authority and funding levels would fall on deaf ears on both counts. Another 24 percent believed the agency would have its legal authority bolstered but not its funding.

We also asked if Gov. Greg Abbott would eventually endorse a candidate in the GOP race for the 2016 presidential nomination. Nearly half thought that he would refrain, and nearly 40 percent thought he'd pick a favorite sometime during the primary contests. Just 6 percent thought he would endorse before the beginning of the primaries.

And we closed by asking if budget writers would follow the House's wishes and try to address pending school finance litigation through additional spending on public education.

More than half said yes and fewer than two in five said no. 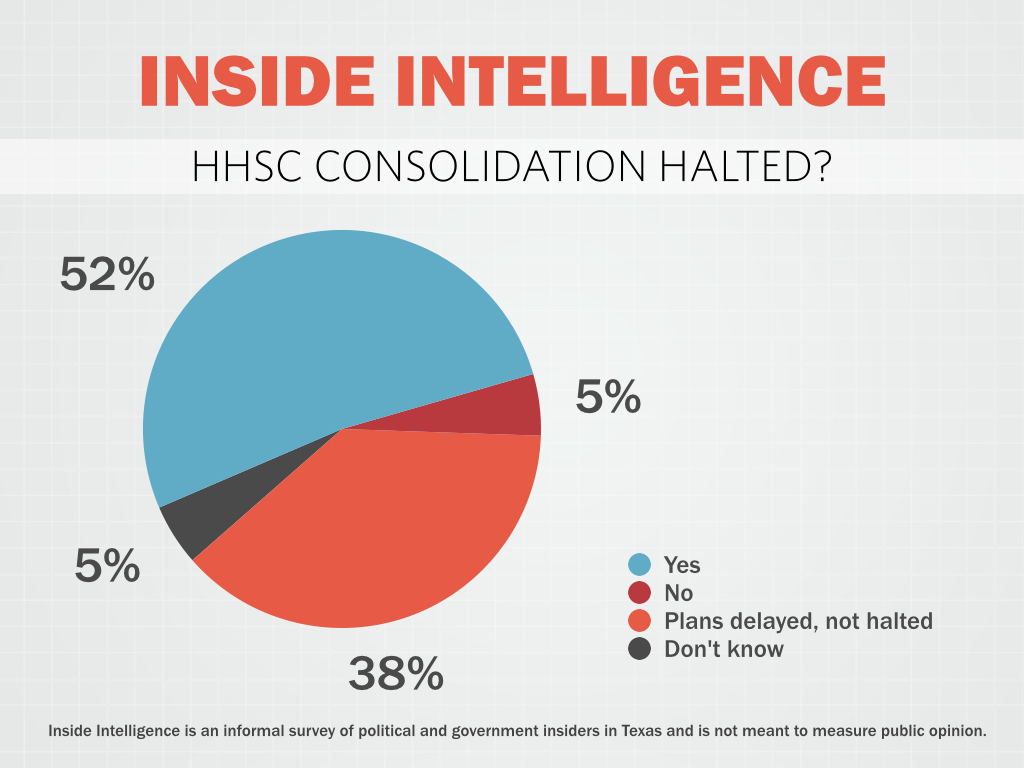 Have contracting problems at HHSC halted legislative plans to consolidate all of those agencies?

• "Abbott's 'strike force' report is credible and puts the brakes on consolidation."

• "They're delayed at least until the Janek situation is resolved, and perhaps permanently."

• "Too big a mess to fix at this point in session."

• "The wise money is on a deal that replaces executive leadership and generally leaves the current structure in place."

• "They seem to be trying to protect a former state senator... Anyone else notice that??" 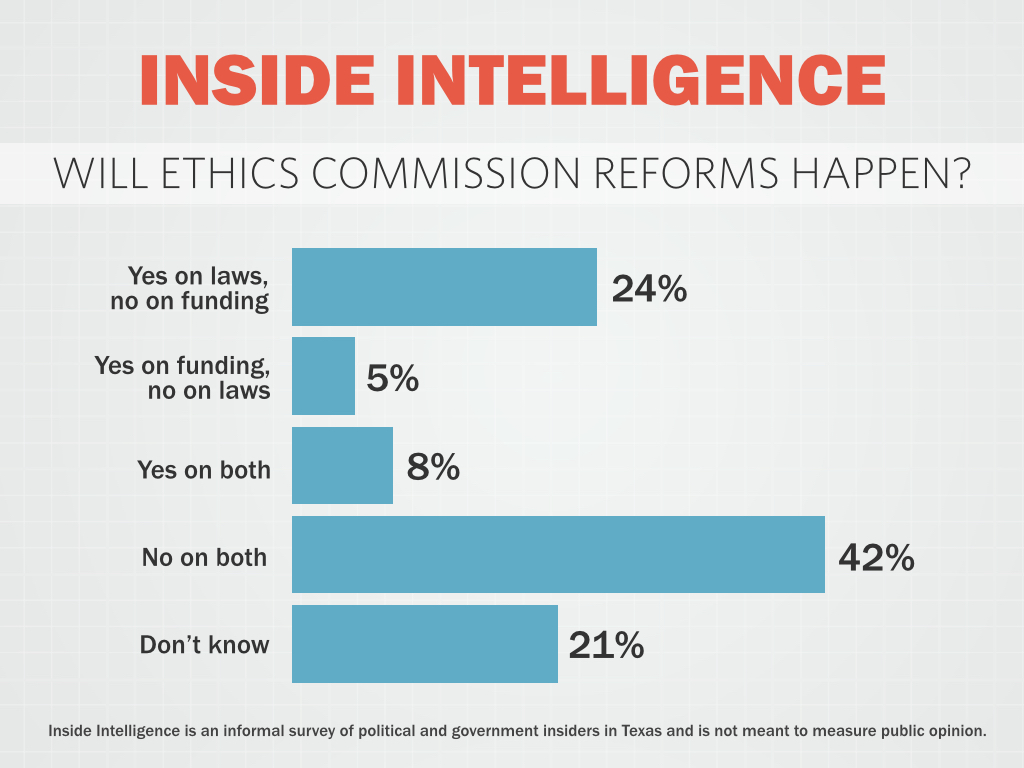 Will Jim Clancy's letter spur changes in state ethics laws or in funding for the Texas Ethics Commission?

• "Which is more toothless, this letter or the Texas Ethics Commission?"

• "To the extent the Legislature isn't already working the concerns Clancy raises, it is too late in the legislative day for significant changes to happen this session."

• "Members don't care much about it. If Straus, Abbott or Patrick got on board, then yes."

• "Anyone notice the public integrity bills being debated cover criminal AND CIVIL penalties? Does that mean the local DAs may be doing that work instead of TEC?" 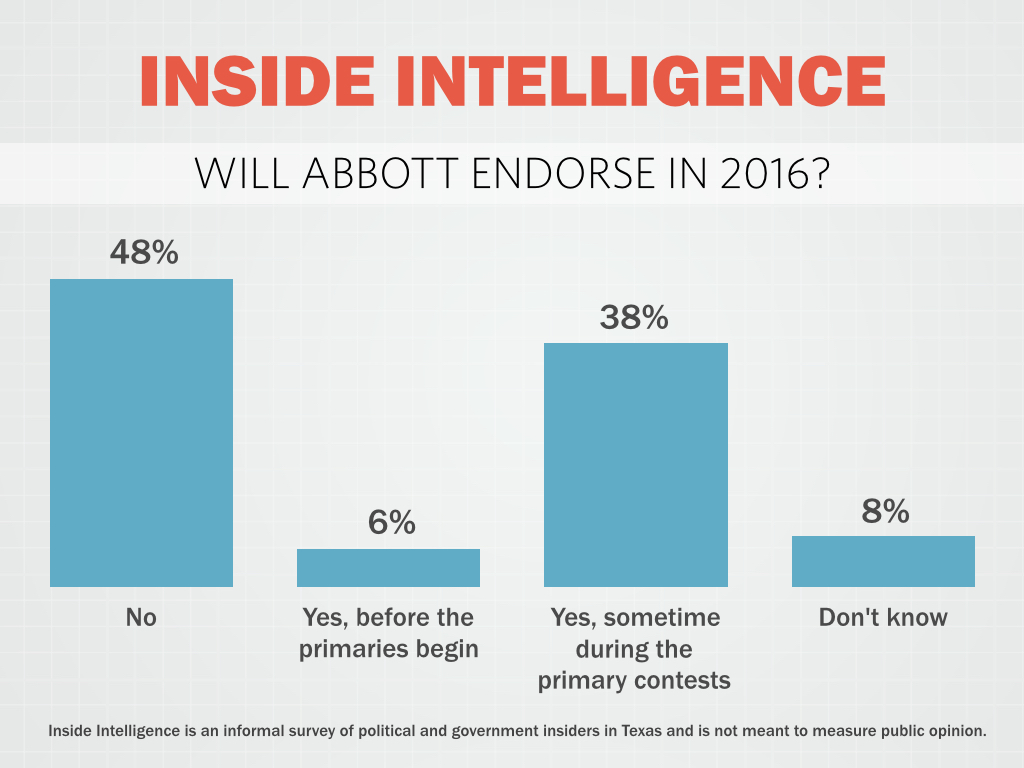 Will Gov. Abbott end up endorsing a presidential candidate at some point in the primary season?

• "He's long been allied with Cruz, but the value of his endorsement would not be worth its cost to Abbott."

• "Can't afford to sit it out, and no doubt will be expected to differentiate himself re: Cruz-Perry expectations."

• "Will wait to see if only Perry or Cruz is still standing before March 1 Texas primary." 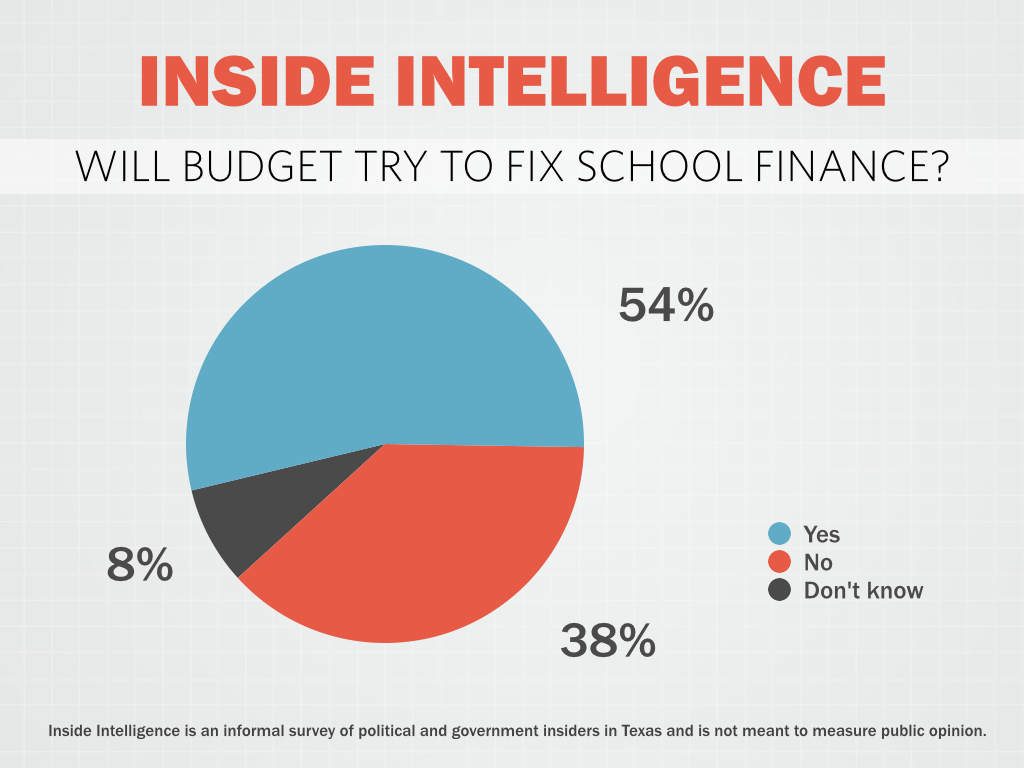 Will the final state budget include the House proposal to spend $3 billion on public education in the hopes of addressing school finance litigation?

• "The cynics must assume some kind of ex parte communications between Court, Lege, and Guv (as a court alumni, he will know how to finesse those signals). Laying out $3 billion in advance of the Court ruling would be the equivalent of a smoke signal."

• "Not sure if the Senate's on board with that plan. Besides, isn't the Republicans' mantra that merely throwing money at a problem doesn't fix it?"

• "How foolish that would be! Let's pay billions before a court even decides it's necessary and after the Legislature has lowered the bar so far the plaintiffs' case is no longer valid. That conservatives (or any stewards of state responsibility) would even consider this nonsense boggles the mind."

• "I think yes, but it could clearly go either way. Right now, the House budget puts $2.2 billion into the Basic Allotment. I think that is more likely in the eight weeks we have left this session."

• "But it will be for naught. The courts will rule and we will be back here next Spring for a special session."