Forget burning the midnight oil. The House this week intruded on the breakfast hour when it debated the budget until 5:39 a.m.

For newbies to the Legislature, budget night is a rite of passage wherein one's endurance is tested through hundreds of amendments and floor debate stretching into the wee hours.

For reference, we looked up the time when debate wrapped on the budget over the last six Legislatures. While this year's vote was the latest, we found three other instances where debate stretched past 2 a.m. Whew! 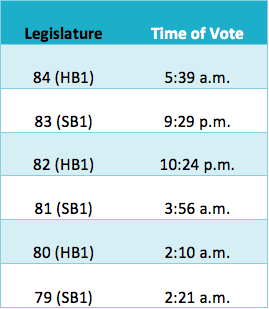 That 10:24 p.m. closing time for the 82nd Legislature needs some clarification. That vote came almost six and a half hours into the second day of debate on that year's budget. The House had a 16-hour session two days before in which it started debate.

The real anomaly was two years ago when the House wrapped up just before 9:30 p.m. after spending about 12 hours in session.

In fact, it was so rare an occurrence that state Rep. Sylvester Turner made a note of the early hour in his closing speech of the evening.

"As you can see, we are now having speeches at 9:20 p.m.," Turner said. "I've been here 24 years; the last time, I believe, that we have finished an appropriations bill before 10 o’clock was probably somewhere around 1993. And in 1993, I think Chairman Junell just took all of the amendments and called it a night."